This latest title from Egg Ball games is a platformer with heart. You play as Trump, a jazz trumpet player looking to make a name for himself. And with some interesting mechanics and a laid-back atmosphere, it’s well worth a look! 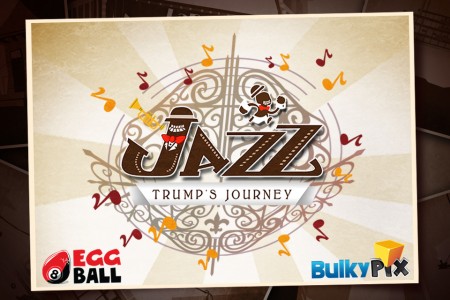 Jazz: Trump’s Journey presents the story of Trump, a lone trumpet player on the search for recognition in the Jazz musician world; overcoming social issues, building up a band, and getting the fame he deserves; and it is an ambitious parallel to Louis Armstrong’s life.

It tells this story through a smattering of cutscenes, some “boss” battles, and brief pieces of dialogue in certain levels; and it tells it well. The characters are cartoony and larger-than-life, the writing is near perfect, and the plot itself, while not affecting the gameplay all that much, is nicely woven in; pleasantly playing in the background as it were. 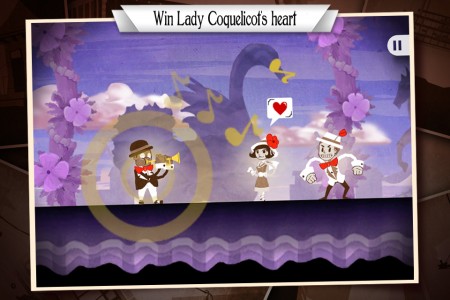 The title features the usual 2D platformer trappings; sliding on and bouncing off of walls, pushing and pushing boxes, pressure switches, moving platforms, and spikes. There are even collectables in the form of musical notes, and hidden areas where you can pick up photographs. You can bounce on the heads of some enemies to kill them, or simply to get to a higher area with others. There’s even a few teleportation doors here and there!

But there’s an interesting original mechanic they’ve added, too. At the tap of a virtual button, Trump blasts out a little riff on his trumpet, and the world time stops. You can use this to stop a falling box in mid-air, creating a platform, or to stop a platform from moving so you can aim your jump easier. This adds another layer to the levels, making you have to think, at least a little, on how to get to the next screen. 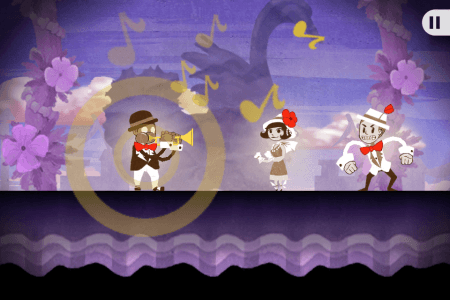 The checkpoints are placed liberally, and for the most part feel like they’re in just the right spot. Anything you collected will be kept even when you die and respawn, which is a nice little feature.

The controls are, virtual, on-screen buttons. They are well placed, and don’t feel like they’re cluttering or obscuring the view of the action. There are times when, for aesthetic reasons, the camera puts Trump on one side of the screen, or in the corner somewhere, where your fingers can blind you, but the camera soon puts Trump back in the centre of the screen and you can continue without too much annoyance. The icons for these buttons are bold and easy to understand, and some only appear when you can actually use that ability or whatever, which also keeps the screen uncluttered.

At first, the controls are a joy. The levels are pretty simple and gameplay is filled with wonder at the art style and animation as your traverse the levels. Once you hit the harder levels toward the end of the game, and the twitch factor comes into play, you can soon find yourself missing a button at a crutial moment and plummeting to your doom. Because there is no tactile physicality to the button you’re trying to press it can, at times, become frustrating when you die for the tenth time on the same part of a level. 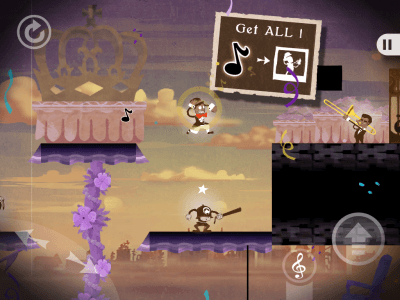 There are also a couple annoying things built-in to the mechanics of the game, however. For example, when you reach the top of a ladder, Trump bounces into the air (one can only assume he’s happy to have made it), which in most of the game is a fun little animation to add to the general feel of the game. This can be a problem, however, when there’s a row of spikes above your head.

There are a few bugs here and there, collision errors and the like, but they can easily be forgiven when you see the better part of this game in action. Most of the little puzzles are fairly straightforward to figure out, and not too taxing to put the solutions into practice. There is a rising curve of difficulty, but until the last couple of levels, things start getting really, really tough; a real change of pace from the bulk of the game, which is nice and gentle in it’s little challenges. 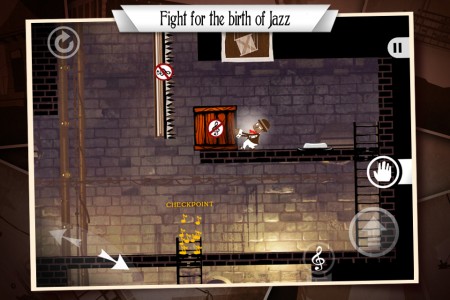 The visuals in this games are wonderful to behold. The painted world has a sweet bluesy/jazzy vibe to it, and has a good level of detail throughout. The objects you can interact with are more bold and cartoony, but still keep that level of finesse the rest of the game has.

The characters are simple, vector-based works of art, and their animations are exadurated and fun to watch. They remind me of the old betty boop cartoons; the old-school feel and wavy arms really bring these characters alive. 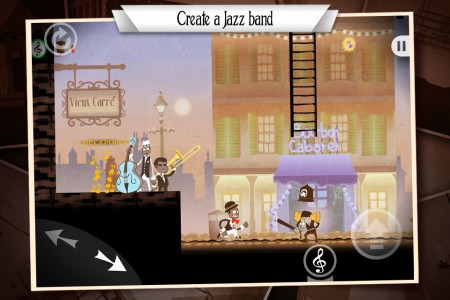 The music is of course jazz thoughout. And while I’m not all that into the genre of music, it compliments the game’s art style perfectly. If you get stuck in a particular level, though, you may find it starts to grate the third time you start listening to the same track. But again, this’ll likely only happen towards the tail end of the game, and the rest of the time, it was fun to listen to something out of the ordinary, especially for a platformer.

The sound effects are good, adding to the cartoony animations of the world. There is a bug with certain sounds being heard from way over on the other side of the level, but for the most part they simply enhance the already pleasurable experience.

At the end of the day, this game is fun to play. With a passable story, stylish presentation, and some cool music, Jazz will be a pleasant excursion for any platformer-fan. And while the virtual-button controls may become troublesome at certain points, most of the time they work fine.

Whether you like the Jazz genre or not, the game is a great excursion for anyone to pick up.