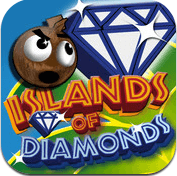 Islands of Diamonds sees you rolling a coconut around a level, gathering all the diamonds and any gems you can manage before the time runs out.

You’re a coconut, who’s greedy for diamonds. Maybe he wants to surprise his girlfriend with a necklace? Maybe he needs to sell the precious stones to buy food for his starving family? 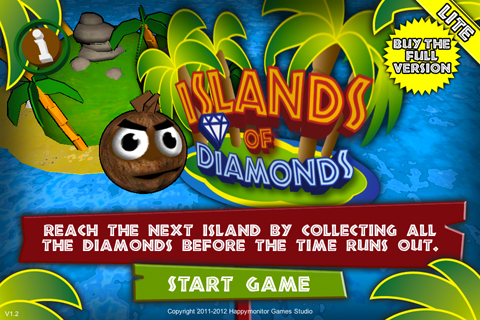 When you open the game, there are a series of options you are presented with. The first being the difficulty level you’d like to play at. This pretty much only affects the time you have to complete a level, as well as how much each gem is worth in points and such.

Then you can choose your control method. Originally, there was only “tilt” and “touch” options available here, and if you choose either of those, you’ll quickly find that playing using those controls is pretty much impossible. They have since added the “joypad” option to the list. This mode includes 4 diagonal directions (as the game is in an isometric-style view), and also adds a “brake” button in the centre; a feature completely lacking in the other two modes. These features make the “joypad” mode the only one that is even remotely playable. Once you choose this mode, each level becomes beatable, as opposed to insanely-hard-no-matter-what-you-do.

So while it’s good to see that they have listened to the players of their game, it makes me wonder how they didn’t realise the other control modes would be a problem in testing. From the looks of their gameplay videos, the controls look a little more manageable on the iPad, giving you more fine-tuned movement using the larger screen and overall size of the device. 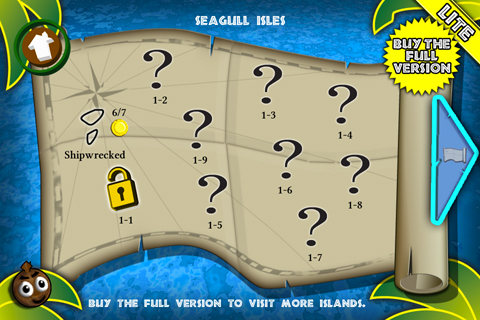 You are then presented with a level selection screen, with 3 separate and themed maps. Islands are marked in groups across each map, with an accompanying padlock symbol that will change to a golden, unlocked one once you get that far, and a golden coin once you’ve beaten it.

Each level is a small group of islands made up of blocks, moving platforms, launching pads and the like. There is the odd bit of regular land from time to time, but the bulk of play will be on these blocks; doing your best not to fall off into the water (or lava in later levels), exploring to find and pick up as many gems as you can, and to find a path to every diamond in order to complete the level.

To introduce a level to the player, the camera cuts to each diamond available, and then to the centre, where your coconut will spawn. Unfortunately the camera doesn’t actually pan across to each diamond, but simply jump-cuts to the new view, leaving you with no idea as to how they are positioned in relation to each other or even your spawning position. Also, this “intro” is not skippable, so if you failed at completing the level, and are retrying it, or simply want to play it again, you’ll be sitting through this little cutscene every single time, no matter what. 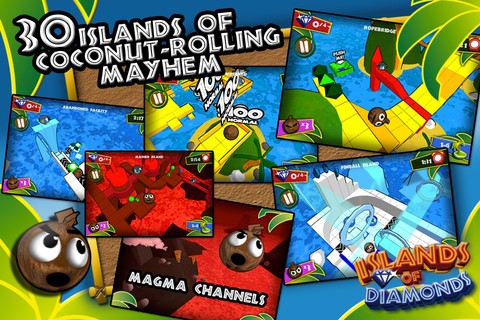 You may notice that as you play, the camera can be a little odd at times. It seems to only move on a 2D plane, not moving up or down with the coconut. This means that on a tall level, when you’re at the bottom, you’re tiny, and when you’re at the top, you’re huge, and can hardly see where you’re going. On the few levels where there are blocks and platforms that you need to roll underneath, you simply cannot see the coconut at all. Now, that may seem obvious, but it really makes navigating those sections difficult, or at least awkward and cross-your-fingers-and-hope-you-make-it.

As you progress through the game, there are a few little additions that will crop up in the levels, keeping it somewhat interesting; crumbling blocks, one-way flaps, physical objects you can bump into and push around, as well as switches and levers.

You may notice that if you fall off of the level, into the waters or magma below, your life counter (starting at 3) does not decrease. It turns out that you only lose a life when the timer runs out, leaving you to merrily fly into the water as a shortcut to getting back to the starting position. I’m not entirely sure if this was intentional, but it kinda ends up with falling off not having any penalty at all. 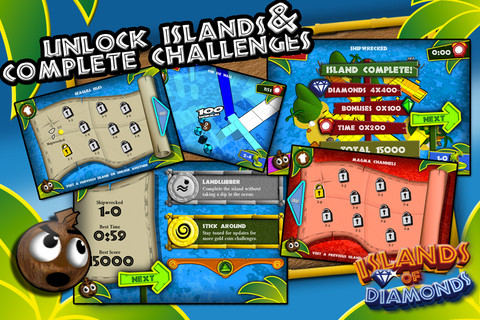 After each level your score is tallied up from how many diamonds and gems you picked up, as well as how much time you have left on the clock (unless you’re on easy mode). You are then showed your best time and score for that level, along with the achievements for that level. Each level has 7 available achievements, ranging from completing in different difficulty modes to not falling into the water during a playthrough. For some reason, you aren’t just showed the new achievements you’ve unlocked, or even all of the achievements you’ve unlocked thus far; it shows you every single available achievement, with a little pause for each one to make sure you know it’s there.

As with most things in this game, you cannot skip any of this, no matter how many times you’ve seen the exact same list of 7 available achievements. Once the list has finished doing it’s thing, you can scroll through it, to read more about each achievement and see which ones you still need to get. Again, as with most other things in this game, the interface isn’t smooth or even using familiar controls, and tends to bug out from time to time. In this case, instead of the usual swipe-to-scroll gesture, you have to tap on the top-most or bottom-most item to scroll around one item at a time. 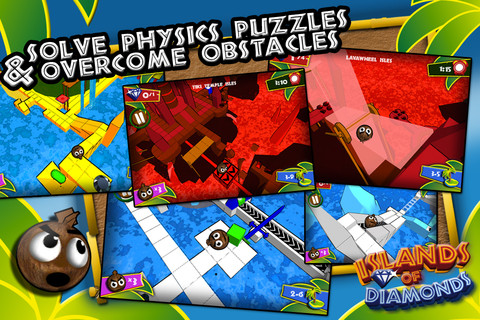 A big “next” button is then shown to you, letting you get back to the map/level-select screen, to continue to the next one available to play.

The developers have not implemented any multi-tasking features whatsoever, which can become annoying if you receive a phone call or switch to the browser in between plays, expecting the level to be remembered so that you can continue from where you left off. Instead, you’ll be put back to the very first loading screen, make your way through the menu system, and finally tap on whichever level you want to continue with and, of course, start it from the beginning. 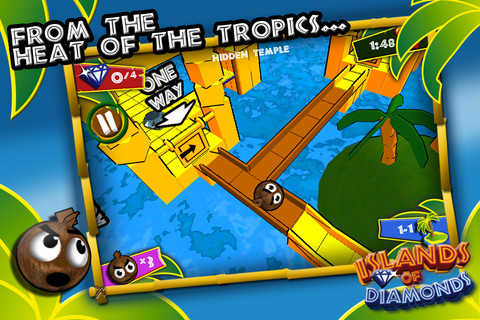 The music is pleasant enough, with each map having its own track. The sound effects are serviceable, although some, like the ticking timer for example, are a little too loud and distracting. From time to time, the coconut will sounds worried, or mumble things liek “careful” when you’re making your way across a thin ledge. This is a nice touch, and keeps up the overall cutesy feel of the game.

The visual style in Islands of Diamonds is essentially cell-shaded, with hints of regular textures here and there. The components in each level are simple but effective, making it pretty clear as to how things work, and how you’re meant to solve the puzzles. Some levels have little bits of text hovering above new components and such, and when you pick up a gem or diamond, a block of text floats up from it, telling you how many points you received for it, or how many are left, respectively. Apart from the odd added component here and there, the only real difference between the beach, ice, and lava maps is the colour-scheme; everything tinted yellow, blue, or red respectively. The overlays are nicely rendered vector-art pieces slotted away in the corners of the screen, and they get the job done. 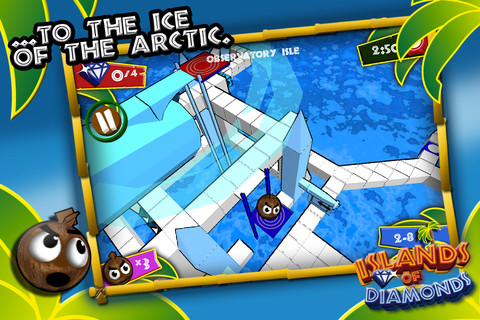 So. Islands of Diamonds, eh? Hm… It’s the first release of fledgling game studio “Happy Monitor”, and taking that into account can make some of the problems and issues this game has forgivable. That said, this game needs a lot of work. The basics are there, and they’ve done a great job of creating a whole games with no budget and so few people working on it in their spare time, effectively. But I just don’t think it can really compete with so many polished and well-tested games on the market today.

And so, while I cannot really recommend this title, I wish it’s creators all the best as they put their experience in making this game to good use in creating future titles.