It’s an exciting time for mobile gaming. We’re seeing revolutionary new genres and concepts, hours of gameplay for less than $1, titles with graphics that arguably rival current gen console titles and even smooth online multiplayer. Iron Force is a strong example of online multiplayer done right on iOS. It may not be flawless, but the excitement of virtually murdering a fellow human being can never be replaced and Iron Force captures it perfectly. Even if the game doesn’t interest you, you should still pick it up regardless as it really does showcase the power of current mobile gaming. Oh yeah and it’s free so you have no excuse! 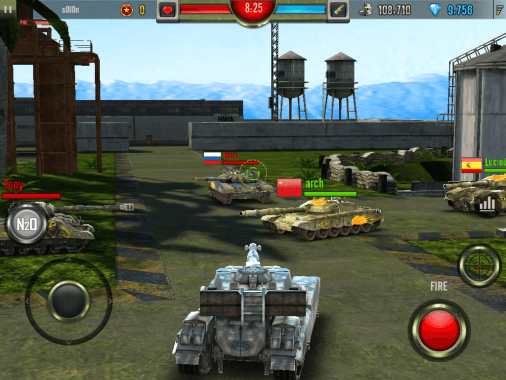 Iron Force is an online multiplayer tank battling game much in the same vain as World of Tanks. Players duke it out against each other in Tanks, earning experience points along the way to level up and improve their vehicle.  The game runs on the free-to-play concept but before you dismiss it – Iron Force is a game that actually pulls it off well. The way this works is that upgrades can take time to deliver to you, but using in-game currency or in-app purchases you can speed up the process. The same thing applies for fuel which is needed to battle, so players are restricted to how often they can play in a day unless they want to pay. While this is a major obstacle for many free-to-play titles on iOS, Iron Force generally doesn’t make you wait to long – about enough time for a quick Facebook break. Also purchases don’t feel forced and the game encourages you to just grind more instead so it all seems rather fair. Battles earn you two types of currency – a typical money currency and a rarer diamond currency awarded you throughout your battles. Cash can be used to purchase upgrades, while diamonds can be spent to speed things up and if you save for long enough – buy better tanks. On top of this there’s tournaments, leader boards, legions to join and more so it’s safe to say it’s set up well for a strong community to flourish. Every day you log on you get a sweet little gift as well. How thoughtful! 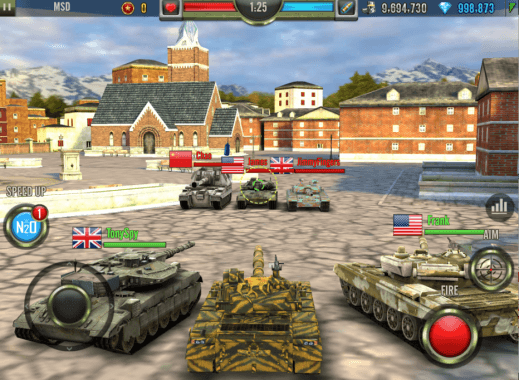 So with all that sorted – how does it feel once you actually get inside the tank? Well sadly, a little slow at first. As you level up however players will definitely feel an immediate increase in both power and fun and it can grow to be a rewarding experience. However this doesn’t kick in until you’ve unlocked a N2O boost for your engine and the aim/scope option for your turret. So while it does kick off to a slow start things do tend to improve after that obstacle. Gameplay can be a little clunky at times but it’s no deal breaker and connections are generally pretty strong. Sure it’s not perfect but about 80-90% of the time you can expect smooth gameplay as you destroy tanks worldwide. The upgrade system is deep but there’s not much strategy involved in combat so generally whoever has the best tank is going to win. The only exception of coarse is power ups which are found on the battlefield which results in a Super Smash Bros type situation where everybody is running for the power up to give them that edge in battle. It gives the game a type of party atmosphere and really makes the game fun. One major flaw of the game however is that once you get a better tank you lose all your upgrades and the game starts to suck again, forcing the player to build their machine again from scratch. It’s worth it but still very annoying. 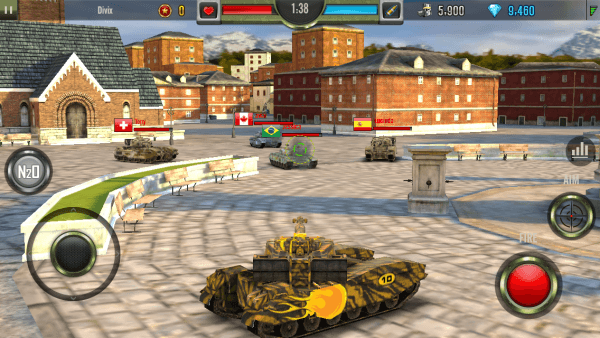 Presentation in Iron Force doesn’t go leaps and bounds to impress you, but what’s present is nice. While graphics are a little blocky some nice attention to detail with textures is good and while maps generally tend to play out the same there is a nice variety in the aesthetics for what’s on offer. Top it all off sound effects get the job done to assist in making the tanks feel like tanks and like all military games you can expect the typical horns, marching drums and motivational “epic” sound. Much like everything else in the presentation it’s pretty much what you’d expect. It doesn’t need or want to blow you away, it’s just there to set the tone and keep you engaged in the atmosphere in which it does so successfully. 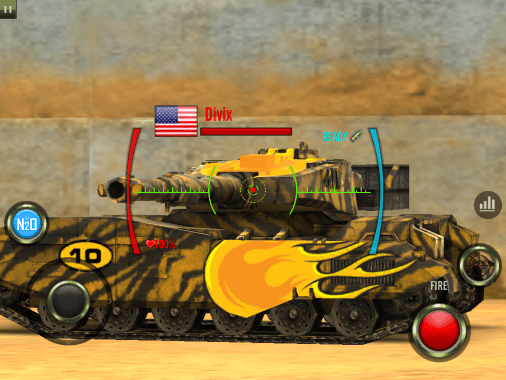 Iron Force isn’t a perfect game – the controls can be a little clunky, the presentation won’t blow you away and it does require a lot of patience. The game is very slow at first, but if you can make it through that players will find a deep upgrade system and that the game is set out and ready to support a very active community. The free-to-play model doesn’t feel forceful with in-app purchasing and for the most part gameplay feel smooth when battling opponents from distant locations. If you’re rocking a mobile device you should definitely consider giving it look as it could be one of the best online multiplayer titles for mobile gaming since Order & Chaos Online. Plus it’s free – so it’s an easy recommend for online multiplayer fanatics.