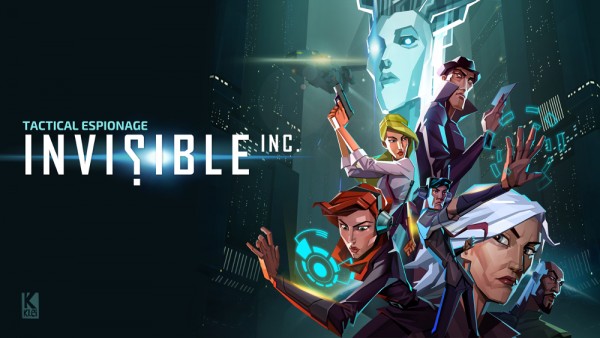 The development team at Klei Entertainment may just have a new indie darling under their belts once again with their new title. Imagine a game that takes what you love from the XCOM and Splinter Cell games, with a dash of Klei’s Mark of the Ninja, and throw it into a cyberpunk world: that’s Invisible, Inc.

With that said, comparing it to other games and franchises does it a disservice. Invisible, Inc. is a cyberpunk spy game with isometric, turn-based strategy and stealth gameplay in procedurally-generated levels. I know, I know: that mouthful sounds like a lot of game styles seemingly stapled on top of one another; like the Frankenstein’s monster of video games. But the team at Klei takes the best elements of each and makes something completely new with Invisible, Inc. And not just new, but maybe even something wholly brilliant in its own right. 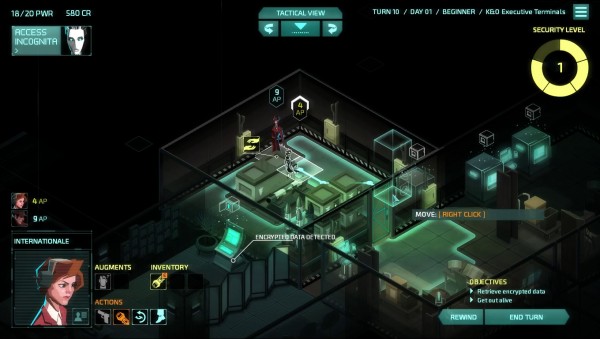 Set in 2074, in a time when “big business” rules the world with a cybernetic fist, the game opens on the headquarters of Invisible Incorporated, where the leader – Central – and team of agents are working to ensure the mission currently happening does so flawlessly. But, as Agents Decker and Internationale are finding their work a little too easy, Invisible is breached by corporate-owned mercenaries who begin killing everyone. Central escapes, taking Invisible’s artificial intelligence entity – Incognita – along with her on an external drive before Decker and Internationale extract her on the roof.

In Invisible, Inc., you play Operator. You command the Invisible agents and must lead them to through many successful (or heartbreakingly unsuccessful) missions. The corporations nearly completely destroyed Invisible and it is up to you to strike back by raiding corporate facilities to gain funding, tech, weaponry, and software leading up to a final showdown with them. What’s worse: Incognita (the AI entity) can only survive away from its system for 72 hours, so you’ll need to do it all by then. 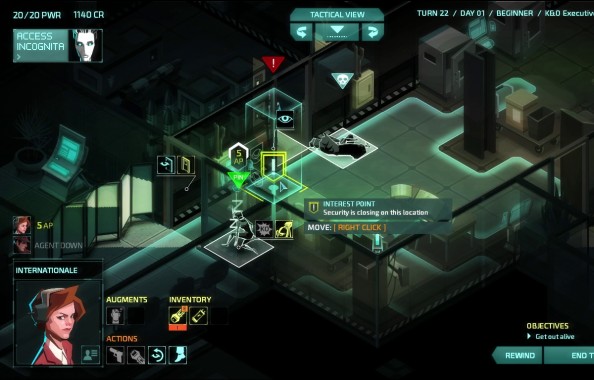 Invisible, Inc.‘s plot is reminiscent of the Mission: Impossible and James Bond series of films with Invisible acting as the IMF or MI6 and Central as M. Though, Central genuinely reminds me of a socially-conscious, non-alcoholic, and competent Mallory Archer (if only Decker were her son). But it has all the fun high points from classic spy films that you’ll love, but set in a futuristic timeline that seems almost frighteningly prophetic.

The gameplay works extremely well in conjunction with Invisible, Inc.‘s plot. You are given a selection of missions to choose from, each offering you something different: weapons, funds, cybernetic augments, recovering a captured agent, etc. It is up to you to decide which mission to take. You are based out of an aircraft, so all traveling takes time. You will find yourself debating over which missions to take to help your final mission to hopefully take down the evil corporations for good.

All missions begin with your team teleporting into a corporate facility. At first, you start off with just two team members – Decker and Internationale – but, if you do well enough in certain missions, you will gain additional Invisible agents and can have up to four in a single mission. It is a turn-based strategy game, so you must not only make your move, but think of the move the enemy will make following your actions. However, it is also a stealth game. You need to make sure that you are not seen by the enemy, and there are so many ways to be seen by the enemy. Not only are there guards patrolling, but many rooms have cameras or camera bots that will alert your presence to the guards, listening devices that alert guards when any loud sound is made (like firing a weapon or knocking out a guard), and the occasional deadly robot that will shoot your agent dead and report it to the guards just to name a few. If the latter happens, you better hope other agents are not near the fallen one.

Much of this is helped by having Incognita on your side. Incognita can hack most electronics in the vicinity to do things like turn off cameras and listening devices, shut down power in some areas, unlock safes with credits for agents to steal, and temporarily take control of a robot. Any one of these actions, however, has a price. Incognita has a finite amount of power and it is difficult to get her more. Usually, an agent hacking a console will give Incognita a small replenishment. But as the level progresses, each hack Incognita makes will cost her power. Later on, you will reach levels where some electronics also inhabit daemons that can cause Incognita to lose a few turns or make it far more difficult for her to hack. 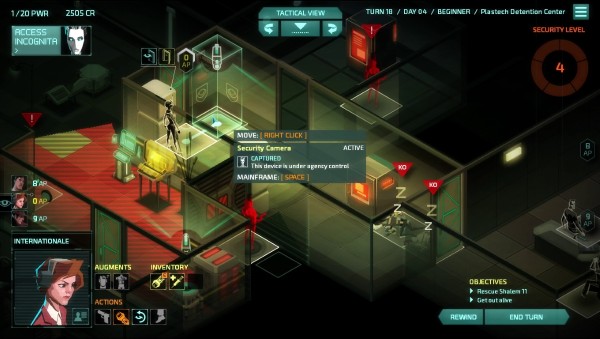 As a matter of fact, everything in the level gets more difficult as you progress. The more turns taken within the level, the difficulty level increases. This could be anything from costing Incognita more power to break a firewall to bringing in more guards/killer robots to bringing in an Enforcer guard who wears such thick armor that nothing an agent can do will take him down. Invisible, Inc. is an already difficult game that gets more difficult the more turns you take to complete a mission. Where many are going to go wrong playing this game is getting anxious and trying to rush through a level. What should be remembered is that the player isn’t playing the agents on the ground but their all-seeing Operator, watching over to get the agents through this mission alive. If the player does not concoct a strategy before making a move on his turn, the whole mission could be over before the player even realizes it. The best thing a player can do is think carefully before making any move. One thing to help alleviate some of that pressure is giving the player Rewinds. Each Rewind turns back time by one turn. You get five Rewinds per level, which can definitely help… unless you screwed up a very long time ago.

There are also a few fun roguelike elements to Invisible, Inc. Firstly, permadeath, or rather, permacapture. If your agents are both captured before you make it out of the level, game over. You will need to begin a new campaign. If you see things are going down quick, the game gives you the option to either replay the mission or even go back to the beginning of that day (72 hours, remember?). But each level is procedurally-generated, meaning that the level you choose to replay will be nothing like the one you left. There may be different entities guarding your objective, your area of escape, or whole new tech that might have daemons on them to temporarily disable Incognita that were never there before. No matter what you learned from your last failure, playing it over will be a whole new monster.

Invisible, Inc. – like most, if not all of Klei’s games – is a vision to behold. The mix of handdrawn-style artwork over a cyberpunk landscape manage to blend remarkably well together, giving the game a look so visually distinctive from not just Klei’s other titles, but any game that I can recall. 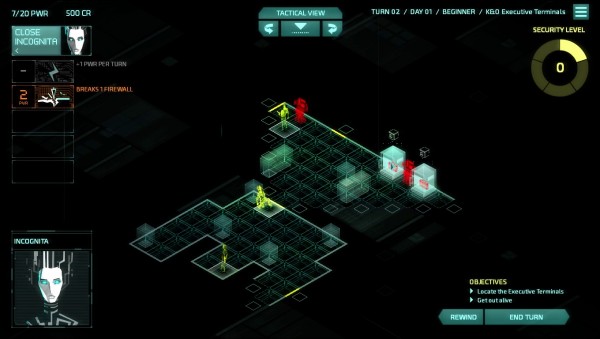 But I must also take a second to specifically point out the hacking visuals. When you hit the spacebar to play as Incognita within a level, the walls come down, the camera pulls back, and the entire map is broken down into a colorful wireframe landscape. The yellows, reds, greens, and blues pop out over the black floor. Each character on the map is broken down into two colors: red for enemies and yellow for agents. In a weird way, it stands as a testament to how simply an inorganic entity could possibly see the simplicity of world. Or maybe I’m reading too much into it. Either way, it’s just gorgeous.

The sound design in Invisible, Inc. is also fantastic. The music plays like a classic spy movie score injected with modern-day electronic music. The voice acting, sounds effects, the synth music that pops in when you change to Incognita’s screen: all have the same care and detail that went into the visuals and gameplay. The composers and sound designers in this game need to work together for as long as Klei can hold them there. 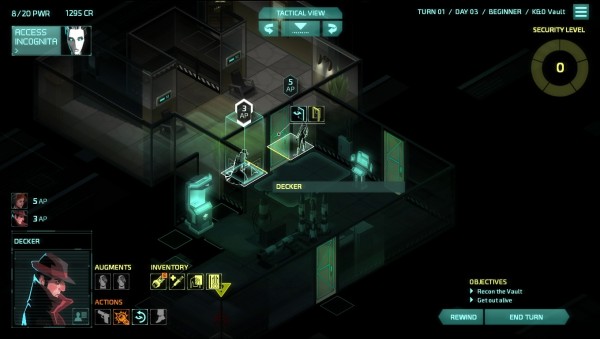 Invisible, Inc. may very well be the best game I’ve been fortunate enough to play this year thus far. With the increasing level of difficulty, it most certainly is not a game for everyone. But, as a fan of both stealth and strategy games, this may very well be the best that has come out of both worlds in quite a while. It is a rarity for a game – or any storytelling artform, really – to use parts of different genres and have them work so well in unison with one another. Invisible, Inc. not only does this, it sets the bar for it. 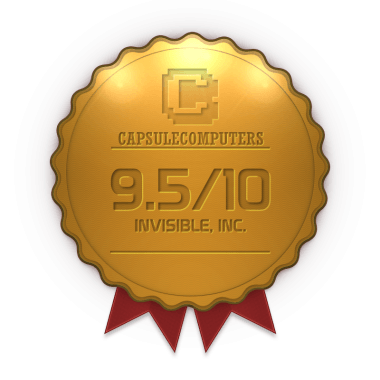