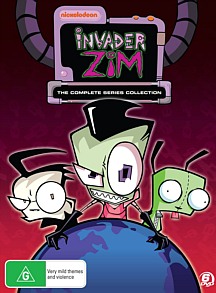 Overview:
Invader Zim is a curious cartoon for a number of reasons. The fact that it aired on Nickelodeon being the most curious fact of all. This is a cartoon series that is almost too dark to be for children, yet it has a silly side that somehow manages to fall within that audience range. The problem though with Invader Zim though isn’t its darkness, it is that like it’s protagonist it is just far too alien for its own good. For some that isn’t a deal breaker, but it’s really a large factor to why this series never gained an audience during it’s TV run. 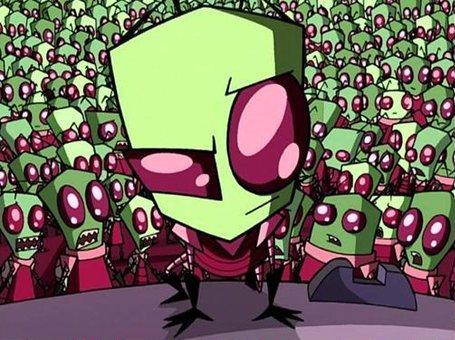 Story:
The premise of Invader Zim is rather simple and it’s execution is actually quite well done. Zim is a good for nothing Irken with an insatiable thirst for power and respect, both of which he never really gets. In an attempt to get rid of the annoyance of Zim forever the legendary Almighty Tallest the leaders of the Irken race of aliens send Zim off to an unknown planet which just so happens to be Earth with the mission to conquer it. Thus is the basic plot of Invader Zim.

Each episode generally revolves around 1 of 2 general plots, that being either Zim coming up with an idea for his scheme to take over the world or Zim’s human nemesis Dib coming up with a scheme to reveal Zim’s true alien nature. Both storylines work well enough and leave a fair amount of room for creativity.

At it’s best Invader Zim is an incredibly creative and engaging cartoon series with a fairly well defined mythology, at it’s worst it is downright disturbing and painful to watch. It’s these two great extremes that make Invader Zim a difficult series to recommend. On one side of the coin it has it’s fair share of great moments and on the very other side it is utterly repulsive. 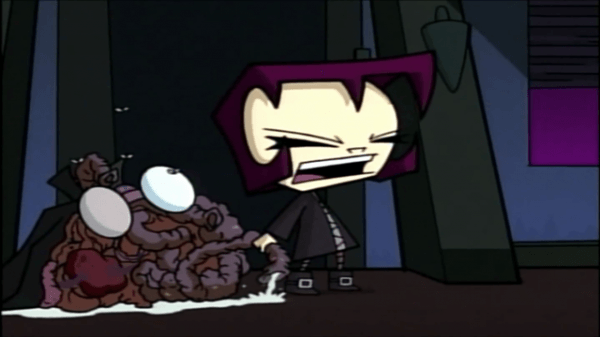 As I mentioned beforehand this is not really a cartoon that is suitable for children. It’s just so grim and at times just downright miserable. All of the characters lack any real semblance of humanity, making them difficult to relate to and understand on any significant level. The most repulsive episode of the series is undoubtedly ‘Dark Harvest’. This episode revolves entirely around Zim literally stealing organs from a number of children and implanting them onto himself in order to appear more human. It ultimately results in one of the most disturbing half hours of children’s television I have ever seen. What’s worse is that in the end, Zim succeeds in his plan. It’s just not fun viewing at all. There is no message, it’s just misery.

Despite it’s fair share of bad episodes, there are some real highlights here. The pilot episode for one is a brilliant display of what the series is capable of. It sets the tone perfectly and shows what can be expected from the series in the future.

At the end of the day it is very easy to see why Invader Zim was cancelled. The series glorifies the disturbing and doesn’t particularly care to be fun. It appears that the series priority for the most part is to be as repulsive and miserable as possible. Don’t get me wrong there are some fun points throughout Invader Zim, but it is ultimately the series lack of basic humanity that makes it feel so alien. It’s hard to connect with something that you cannot relate to. Anyone that can relate to this series in any meaningful way most likely needs to see a psychiatrist because these characters and stories are just so severely lacking in even the most simplest forms of humanity. 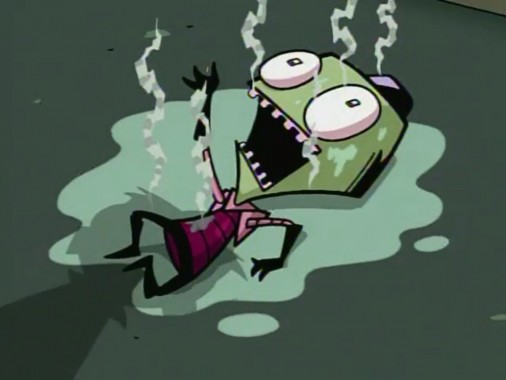 Visuals and Audio:
There is something to be said about Invader Zim’s insistence of being unashamedly hideous. Rarely does a series come along that so passionately takes pride in looking ugly and downright disturbing, but that is what Invader Zim does. It isn’t your standard children’s cartoon aesthetics, instead it’s brutally disgusting at times and doesn’t care to be anything close to appealing. It fits with the subject matter of Invader Zim but works against it far more than it does for it.

The soundtrack of Invader Zim on the other hand is rather brilliant. It fits the series perfectly in tone and is well timed and composed. It is undoubtedly a great bright spot in a rather repulsive overall product.

Extras:
Beyond Entertainment have done a remarkable job with this JB-HIFI exclusive Complete Series release. The box-set comes in a slip cover box and features both Season 1 and Season 2 in their completion. This alone totals in at 46 full episodes of Invader Zim. It is undoubtedly the most comprehensive Invader Zim release to date and for that reason alone it is a must have for fans of this bizarre series. While there isn’t much in the way of special features the release itself is well produced and packs a whopping amount of content that it’s hard to find a fault in it despite the lack of extras. 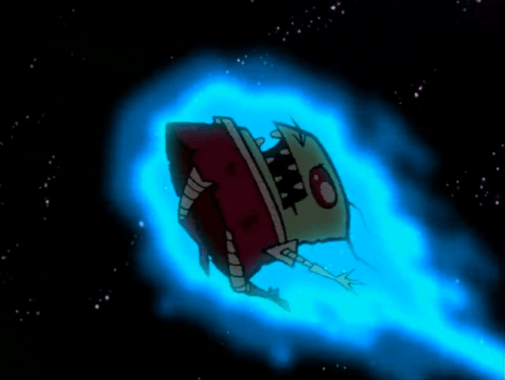 Overall:
Invader Zim is a series that you either love or you hate. There is no middle ground here, it either repulses and disturbs you or it captivates you with all it’s gross weirdness. While it is far from being the classic that its cult-like fandom pronounce it to be, there is a fair amount of fun to be had with this series, bar a few truly revolting episodes. The price is right for this release and if you are a fan of this series this is undoubtedly the collection to own. I can’t really recommend it to the uninitiated, but if you can go in with a relatively open mind you may find that Invader Zim might surprise you or it might just horrify you. How did this make it on Nickelodeon again? Regardless of all that, Invader Zim is series that is often too weird for its own good and the way it bathes in misery isn’t exactly fun family viewing. Proceed with caution, this is one divisive alien encounter.