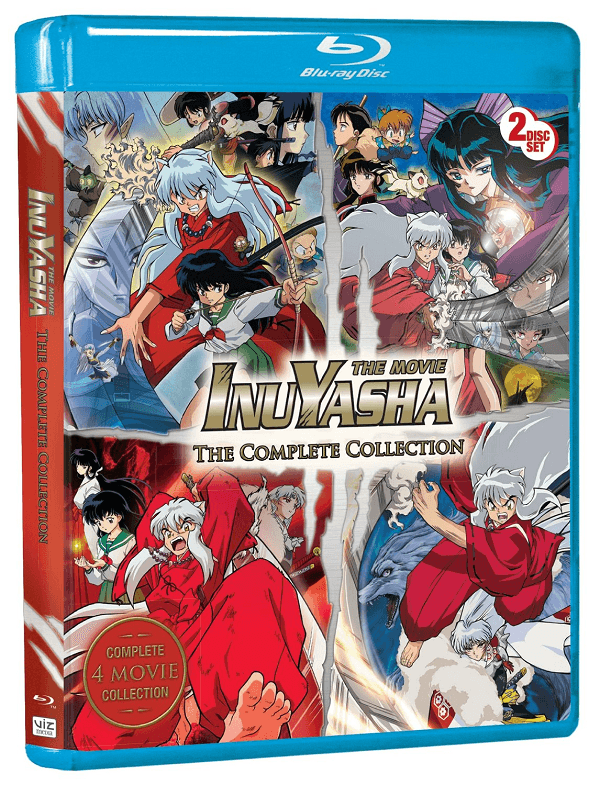 Overview:
The InuYasha anime franchise is one of the most recognizable series overseas thanks to its long track record of being shown on television for many years in North America. However besides the original series which ended back in 2004, a number of movies were spawned and while a few of these were also shown on television for audiences, they were also released many years ago on separate DVDs long before the series itself finally ended in 2010. However now that Viz has brought all four InuYasha movies together in one bundle and is offering each movie in Blu-ray for the first time ever, do these spin-offs warrant a blast from the past?

Story:
Long running anime series often see a number of movies created during their run, however one of the most difficult aspects of these movies is trying to appear relevant to the actual storyline of the series while also making it so viewers aren’t forced into seeing every movie to understand the flow of the story. With these InuYasha movies, it seems that a unique balance was found that actually manages to fit each of these movies into a legitimate section of the series without forcing a disconnection of events between the anime and the movie. 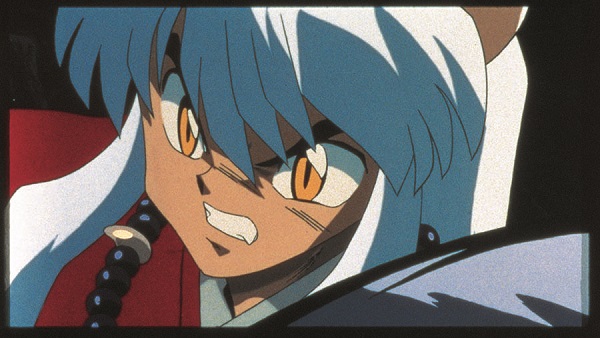 This can likely be attributed to the fact that before the plot began to advance rapidly in InuYasha: The Final Act, the original InuYasha series primarily took advantage of the “monster of the week” formula where InuYasha, Kagome and the rest would face off against a different demon who either was trying to obtain the Shikon Jewel shards, slaying humans indiscriminately or had a vendetta against a member of the group. As such, each of the four movies bundled here manage to not only fit into the series well, but they also help provide some extra character expansion for the cast.

The first movie bundled in this release is “Affection Touching Across Time” and in it the son of a demon that InuYasha’s father tangled with has returned to Japan and he is seeking not only to obtain the same power that his father had, he is also seeking revenge against InuYasha. Menomaru, as he is called, appears with a number of minions and the cast is paired off against these new enemies who wield a few troublesome abilities in what feels like an extended arc from the television series. Being the first movie, the pacing is a bit off thanks to character introductions, but thankfully it still contains a decent level of action with Miroku and Sango each getting some time to shine alongside InuYasha. 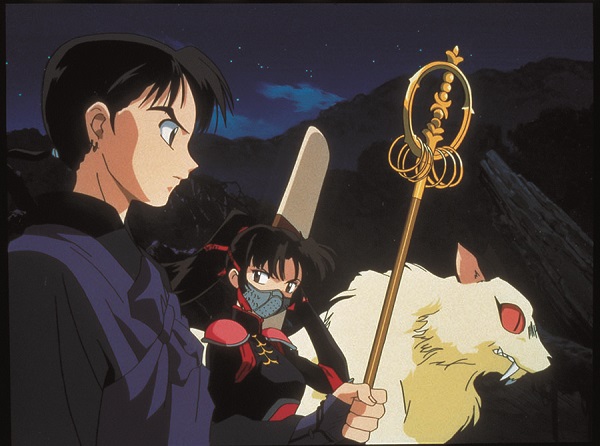 For the second movie we have “The Castle Beyond The Looking Glass” which takes an interesting twist right off the bat with InuYasha and the rest actually managing to kill Naraku. However as the group celebrates, they separate now that their main goal has been completed, but Naraku’s incarnations Kagura and Kanna continue to move in the background. When their machinations revive the demon Kaguya, the group is pulled into another set of battles that sees not only the return of their old foe, but further development between InuYasha and Kagome.

In the third movie we have “Swords of an Honorable Ruler” which actually revolves around InuYasha’s parents a bit and ends up revealing more information about his origins. In the modern day, the seal on a sword kept by Kagome’s family is broken and it turns out that the sword actually is something of InuYasha’s father which was meant to be sealed away for seven hundred years. When InuYasha is possessed by the blade, he travels back to the past in an effort to not only rid himself of the cursed blade but save the innocents of the modern world from its destructive power. By focusing heavily on InuYasha’s family we also see a major confrontation involving Sesshomaru and InuYasha having to deal with his father’s problems once again. Interestingly enough, this movie contains some of the best action to be found in the entire collection as it features a large scale battle as well as the conflict between a possessed InuYasha and Sesshomaru. 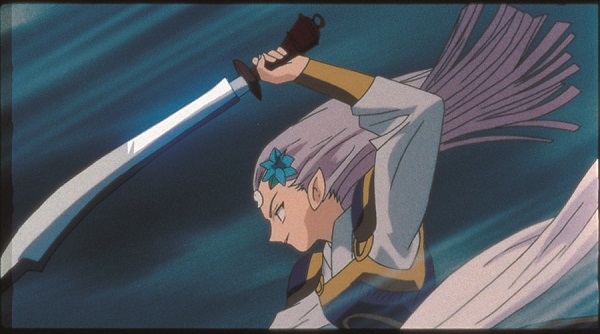 Finally closing out the series we have “Fire on the Mystic Island” which feels like the weakest movie of the collection. While it does delve into the aspect of half-demons and their place in the world, it feels out of place, especially when a large number of characters are introduced and then never seen again despite the fact that they are shown with the group for a small period of time after the events on the island.

Visuals:
It is certainly interesting witnessing the progression of animation quality provided in these four movies. While still decent enough on its own, there are a number of clear animation improvements both in detail and in quality as the movies go on. With the first movie, “Affections Touching Across Time” viewers may find that it appears similar to the TV series while the quality reaches its peak in the third movie “Swords of an Honorable Ruler” on the collection before falling a bit due to some artistic changes in “Fire on Mystic Island.” 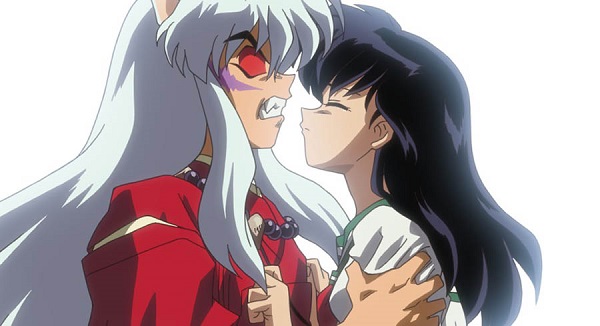 It is worth noting that the screenshots in the review here were provided by Viz Media themselves and actually do not present a clear representation of the visual quality presented in this Blu-ray release. In fact, despite their age the movies have made the transfer to Blu-ray extremely well and are absolutely gorgeous at times with vibrant colors and highly detailed action sequences, all of which are presented quite crisply and are portrayed similar to the image shown above, though the first movie does suffer slightly here due to age.

Audio:
With this release of The Complete InuYasha Movie Collection viewers are presented with both the original Japanese voice track as well as the original English dub which was recorded back when the movies first were released by Viz Media back in the early 2000s. As such the entire cast has retained their English voice actors and the quality of the voice work is still rather impressive. As for the new enemies and characters introduced, the voice work is on par with the rest of the series, even if some of the enemies begin to sound very similar to one another. 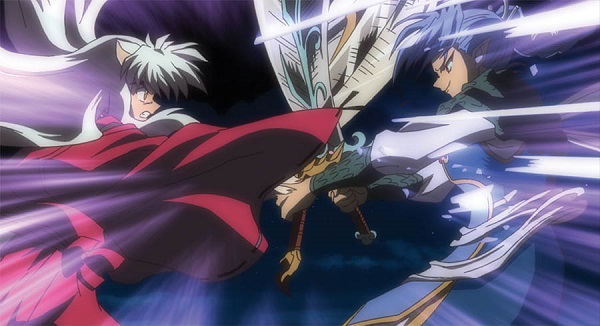 These movies feature the series’ signature background tracks that fans of the series have come to love. As for the ending theme, each movie features a unique ending track which makes it all the more unfortunate that clean endings were not provided in the bonus features.

Extras:
As far as bonus features go, The Complete InuYasha Movie Collection offers very little. There are various bits of production art from each movie, however these are not only minimal, they can only be found via the pop-up menu while a movie is playing. This is due to the fact that while each disc contains two movies, the menu system only allows viewers to select one of the movies on said disc and will automatically begin playing it, which while aesthetically pleasing, is a hassle for those who want to access the features or customize the audio settings.

Overall:
In the end, this complete Blu-ray collection featuring all of the InuYasha movie offers the best way to obtain these movies now at their highest possible quality. Each movie in this collection has its strengths, with “Swords of an Honorable Ruler” being the strongest and “Fire on the Mystic Island” feeling the weakest, and while none of them play a major role on the InuYasha series as a whole, they offer a great expansion to the series and a chance to spend more time with a cast of characters fans have spent over a decade with already.