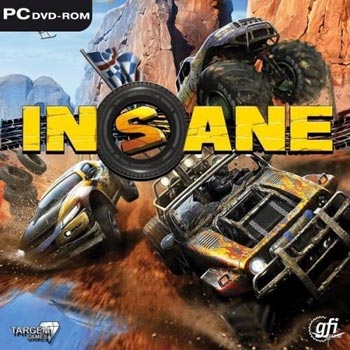 Insane 2 is a nicely-made racer, with the now standard trappings of a boost and destructible vehicles. It brings some interesting additions to the genre, however, and reuses the dusty modes of old, making them new and fresh. 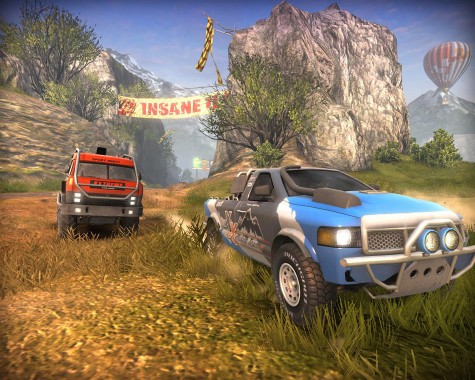 You can use keyboard controls, or a controller to play. A boost meter sits on the bottom-left of the screen, which fills up over time, and can be used by holding the boost button. While you boost, the camera shakes, and the controller (if compatible) rumbles, adding to the sense of speed and excitement. The physics are pretty good, although some sections are particularly bumpy, meaning you’re pretty much in the air most of the time, leaving you at the mercy of the terrain below and how you land.

At first, the shaky cam and bouncy suspension can grate a little, but after a few races, you get used to it okay. 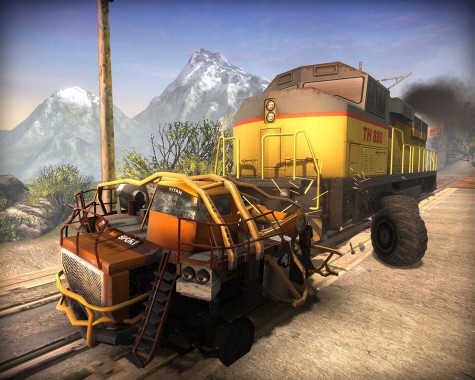 Each arena is looped (Matrix trans-station-style), so that if you go in one direction long enough, you’ll end up on the opposite side of the map. This is pretty useful in some of the modes, as I’ll discuss later; but it can play havoc with your sense of direction. There is a map you can view by holding a button, but as there are no set “tracks” per se, it’s pretty much useless.

Each arena has a set of checkpoints. The one you should be aiming for will be shown by a green star on the minimap, and it’s lights will also show green. This is how a “track” is made up; a series of checkpoints which light up, one after the other as you progress through the level. There will often be an orange star shown on the minimap also, showing you where the next checkpoint will be in relation to the current one. This is a nice, straightforward system that makes everything easy to see and understand; although getting used to this no-so-familiar setup does take a little time.

There are 10 modes, and they are varied, making sure anyone who plays will find something they enjoy. There are capture the flag style modes, where you have to get to the flag first, or slam into the flag holder to pick it up. There are modes where you have to reach the randomly selected checkpoint before anyone else, or even go through as many checkpoints as you can as fast as you can make it. There’s even a mode where you have to stay in the spotlight that a helicopter is shining on the ground, making for a bustling free-for-all with everyone trying to be in the same place at the same time.

While some of these modes will frustrate you no end (and I dare say which modes will cause most frustration will be unique to each player), overall they’re pretty fun. Once you get into the mechanics of each mode of gameplay, you’ll start figuring out how to better beat it next time. For example, once you pick up a flag, you’ll find that your steering goes right out the window, as if the flag was almost as heavy as your vehicle in some cases; so you’ll learn to use bigger, heavier vehicles and cautiously control your steering so as to not roll quite so much. 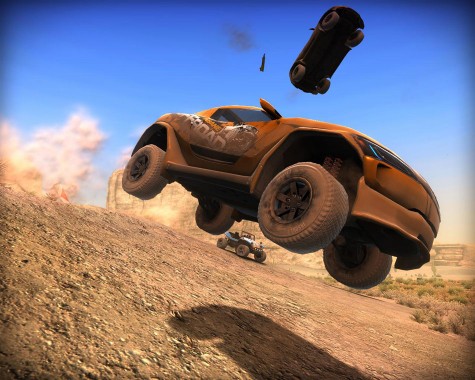 Every event you complete will earn you some XP, which you can then spend on upgrading different parts of your unlocked vehicles. You can also pick up skin tokens you can spend on buying new paint-jobs. Certain cars can only be unlocked by completing particular races, and as you progress, you’ll be unlocking bigger and faster cars, adding to the overall fun you can have playing.

The AI works pretty well most of the time, but being in the middle of a huge bundle of cars all trying to smash into you at the same time can be a little on the overwhelming side; though for a spectator watching over your shoulder, it’s great fun to watch the chaos unfold.

You can play multiplayer online, or locally with split-screen, a rare sight nowadays, and a much appreciated feature. The frustration tends to melt away when you’re up against a friend in the same room as you who’s having just as much trouble as you. At the time of playing there were no servers, so I wasn’t able to play online, but I’m sure as the words spreads there will be plenty of interested parties looking to play against you. 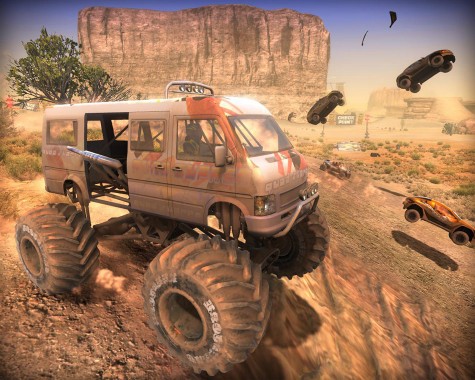 The graphics in this game are great. It doesn’t quite reach Motorstorm quality, but it’s pretty close. The environments are well made, and detailed. The models for buildings, burned out cars and other minor parts like tree trunks and signs are also nicely detailed, though some of the heavier items can make you get stuck on or in them at times.

As I said before, the boost shaky cam can be a little off-putting; it just feels like everything’s wobbling about the place, rather than feeling the force of the uneven ground beneath you. But overall, this game is really nice to look at, if your PC can take it. 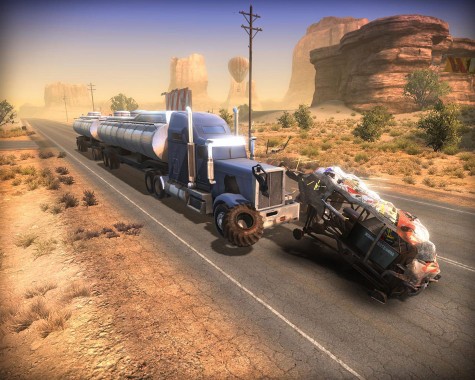 Other graphics, like the minimap icons and such are very clear, and make finding where you’re meant to be going simple. The menus are just as simple, and very much feel like the menus of other racing games like Disney’s “Pure”, but there are a few oddities that leave them feeling functional, but not quite finished.

The audio in this title is just as well made, giving each vehicle a unique sound. And the music is cool, too. it’s pretty much your standard fare of original rock-type guitars and such, but it does a good job setting the mood and getting you ready to do some racing! 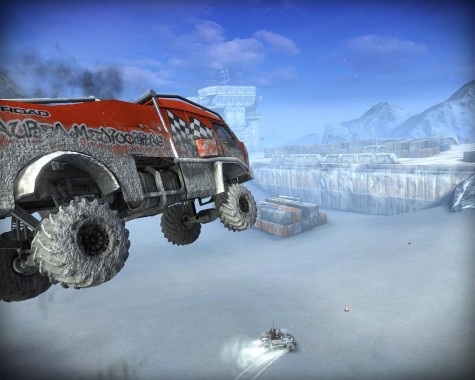 All in all, Insane 2 is a very fun game to play. While it has a tricky start for new players, once you get used to it’s different way of doing things you’ll have a great time playing the different modes and exploring all the arenas included in the game. And while there are some areas that could use some work, you’re sure to have a good time flying around the arenas, mastering the many modes, and playing with friends.