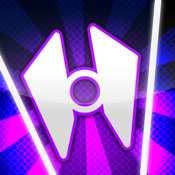 In late 2005, a game was released on Xbox Live Arcade called Geometry Wars: Retro Evolved; an update to a minigame included in Bizarre Creations’ Project Gotham Racing 2 for Xbox. It’s fast paced twin-stick shooting along with neon graphics and pixels chaotically flying across the screen made this game an instant classic and one hard to put down.

In now, in 2011, Chillingo Ltd. (makers of Cut the Rope) have released a close relative to the classic, entitled Infinity Field (developed by Forze Field). It’s impressive graphics hearken back to it’s spiritual predecessor, along with the twin-stick controls. But they have also added their own flare to the genre. 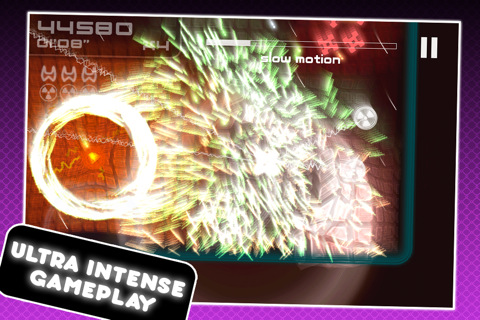 First off, you’ll notice a nice little feature that I  haven’t seen in any game previous; a feature named “Auto Pause”. When you release both sticks for any reason (to reposition yourself more comfortably, or you manage to drop your iPhone in sheer excitement), the game kindly pauses the game for you. It doesn’t bring up the regular pause menu options, but this feature is a welcome one, and one that will hopefully be taken on by other twin-stick-based games in the future.

The sticks are in the usual bottom-right and -left corners of the screen, but their placement feels just right. You’re never in doubt of where you’re aiming, or falling off the edge of the screen, trying to quickly maneuver away from a horde of enemies. Also, the camera view never leaves you unable to prepare for incoming bogeys; it’s just wide enough to get a good sense of what’s going on, but close enough to allow you to wriggle around the colourful shapes bent on your destruction.

Pickups appear periodically in the form of white blobs and shapes spinning around the field. They do a good job of giving you time-limited powers such as Slow Motion, or give you an extra life, but the array of weapons you’re given is well thought out and nicely varied. There is even a nicely proportioned button above your firing-stick to the right which allows you to switch between acquired weapons; a well-appreciated feature that removes the frustration of picking up a weapon you didn’t want in the first place. 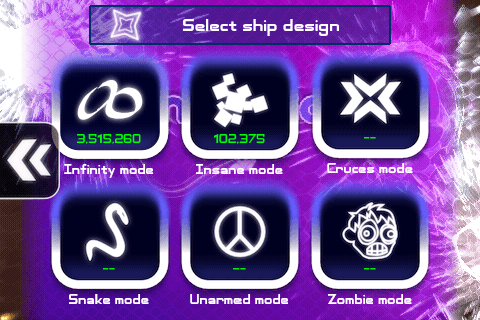 There is a campaign mode, along with 6 survival modes of good variety.

All these modes are unique and satisfying, honing different skills than you may be used to in a game of this genre… and in the Campaign, you are slowly introduced to the styles and concepts of the other modes available, just making want to play more and more; branching out into the other parts of the game until you’ve mastered them all.

The graphics in this game are impressive and engaging; not to mention silky-smooth! The soundtrack is of the cool, electronic variety, which goes nicely with the retro-neon aesthetic; and the sound effects, while a little obtrusive when it gets particularly chaotic on-screen, does a good job of heightening the frantic moments of the game.

It uses Chillingo’s Crystal social network, but also ties in with Apple’s Game Centre— neither of which I put too much stock in, but it’s nice if you’re into the social scene.

In fact the only minor gripe I have with this game is the set orientation. I prefer turning the iPhone over to the right (if you’re looking at it from portrait mode), which allows my fingers to just miss the speaker on the bottom. But as the orientation is set to turning the iPhone to the left, I find myself covering the speaker periodically. Not a biggy; just a pet peeve of mine…

Check out other Chillingo Reviews and News HERE