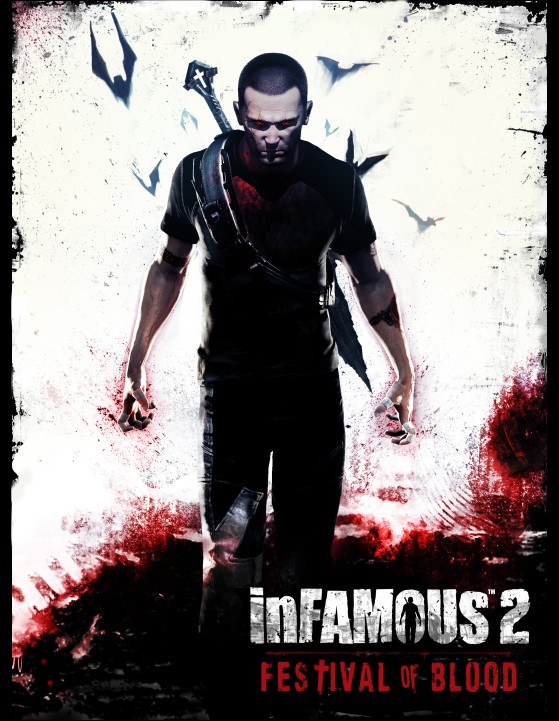 Dear Developers,
Have you released a well received game recently? Why not stick some horror movie monsters in there for no apparent reason? I hear that the zombie bandwagon is pretty good these days!

Okay, so I may have been a bit cynical about the idea of Infamous 2 Festival of Blood, and am sick to the back teeth of the zombie trend that’s festering in the gaming world right now. But vampires? That’s a bit different. In Infamous, and I get to be one? Hmm…

I am happy to report that Festival of Blood has made me take back that initial cynicism, throw it on the floor and call to the mighty Cole MacGrath to strike me down with a bolt of electricity. For $10 it’s a heck of a lot of fun, and is a worthy addition to the world of Infamous that fans should definitely pick up. You don’t have to own Infamous 2 for Festival of Blood to work either, it’s a completely stand alone title. 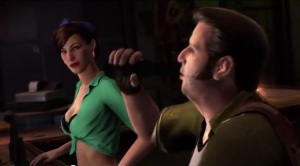 Set in New Marais, Festival of Blood takes place at an undetermined point during Infamous 2. Cole’s ever present sidekick Zeke is loitering in a bar one night when lo and behold, an attractive woman grabs the stool next to him. Being a bit of an idiot Zeke’s chances are pretty non existent to start with, but he lucks out when he mentions his superhero pal. Thus begins a game that stems entirely from Zeke’s desire to impress a girl.

Neatly putting the entire thing outside of official Infamous canon, Zeke narrates a tale of Pyre Night, a festival where the citizens of New Marais light bonfires to remind the evil undead that they have no place with the living. Cole finds himself in the catacombs beneath the city, rescuing revellers from a mysterious enemy. He moves ever deeper into the tunnel, and finds one last victim at its end.

Suddenly Cole finds himself the captive of a coven of vampires, and is brought face to face with a shrivelled old corpse on an altar. Powerless to escape their clutches he can do nothing but watch as the vampires slit his throat and revive their Mistress with his super powered blood. Transformed into a beautiful woman, the leader of the vampires plunges her fangs into Cole’s throat – making him one of her own.

With only 8 hours before the sun rises and renders him a true slave to Bloody Mary, Cole must battle through the vampires and find a cure for his curse – and a way to destroy the one who gave it to him.

It’s not exactly original – in fact it probably forms the plot of a hundred horror movies, but were the people in those stories ever electrified super heroes? There lies the key. Festival of Blood isn’t telling you a story about vampires to enjoy or to scare, it’s telling you a story about vampires so that Cole can get some awesome new moves. Bloody Mary is  a waste of a villain though:  a cliched old world vampire strongly reminiscent of the Conduit Sasha that Cole encounters in Infamous. She never really does anything, but thankfully the quality of the gameplay ensures that you’ll still whiz along through Festival of Blood.

Cole still has the majority of his powers – he can throw rockets and grenades, propel himself through the air and clamber up buildings in fitting vampire style. All the ionic powers are gone though, replaced by a couple of new abilities that have you feeling like the Prince of Darkness in no time. Cole can drink blood, use his vampire vision to see human hearts, and most importantly, turn into a cloud of bats and fly across the city. All the vampiric abilities are fuelled by a blood gauge, which can be filled by drinking from the citizens of New Marais or by defeating vampires. Canopic jars take the place of Blast Shards, and collecting enough gives Cole a bigger capacity for blood.

This is where you would expect the Infamous morality system to step in, but it doesn’t feature at all. Whether you kill everyone you can or never touch a drop, there’s no impact on the storyline. You can leave all those innocent necks alone and still complete the game, but sticking your teeth in is the best way to enjoy Festival of Blood – you are playing as a vampire folks, take advantage and enjoy! 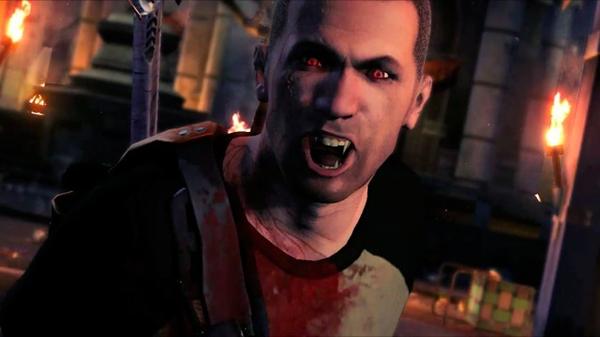 And the best way to do that is with the bat swarm ability. Sure, hunting down hidden vampires and stabbing them in the back is damn satisfying, but flinging yourself up into the clouds and plummeting back down to earth whilst the city rushes up to meet you is where it’s at. Combine it with the familiar electro hover and you can travel huge distances, flinging yourself around New Marais and killing vamps left right and centre. Awesome.

There are five different enemy types haunting the city, including grotesque and batlike Firstborns and minigun toting Harpies (below). Most of the enemies have the ability to teleport, and can be pretty fast on their feet. Harpies hang from buildings and cling to the gutters (sometimes getting a bit stuck and doing a little spasm dance on the walls), whilst others will leap from the ground flinging stakes and blades at poor old Cole. 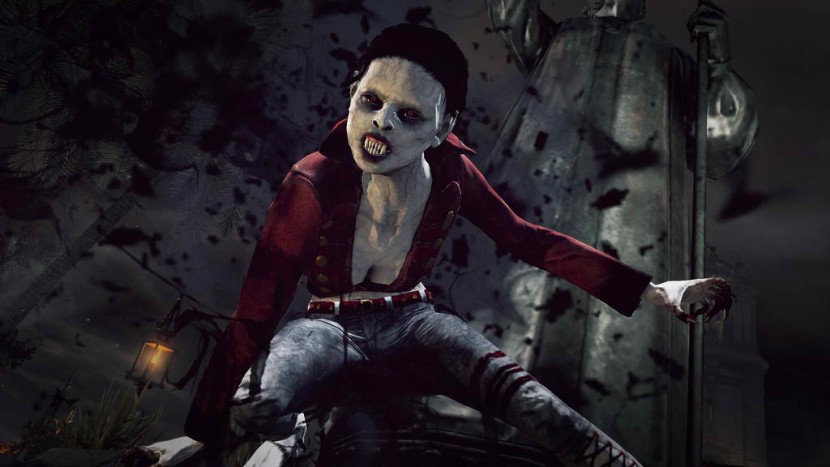 The combat is as frantic and fluid as ever, and staking the screaming defeated vampires is a lot of fun. Combining the usual electric powers with the upgradable bat swarm rush adds a fresh flavour to the fighting, and nothing beats grabbing the nearest human after a chaotic fight and draining them dry. There are a few camera issues that can get you stuck or make you lose sight of the teleporting blood suckers, but that’s nothing to take away from the enjoyment of hunting down the vampire packs.

If there is one thing lacking then it’s a strong big bad boss fight. As mentioned before, Bloody Mary isn’t the best of villains, and there’s never really any difficulty unless from overwhelming numbers.

Some players may find Festival of Blood a bit on the short side, but you have to remember that this is a $10 game. Taking things at a normal pace with a bit of collecting gave me about four hours of gameplay and 71% of the trophies upon plot completion – but I’d be more than happy to dip back into it to get 100%. $2.50 an hour is no bad thing considering the length of some full retail price titles.

There is some replay value offered with the User Generated Content from Infamous 2 included, which gives you a few more options for creating your own episodes of the game. It is also Move compatible, but being behind on the motion control times I am not currently equipped to test it out! 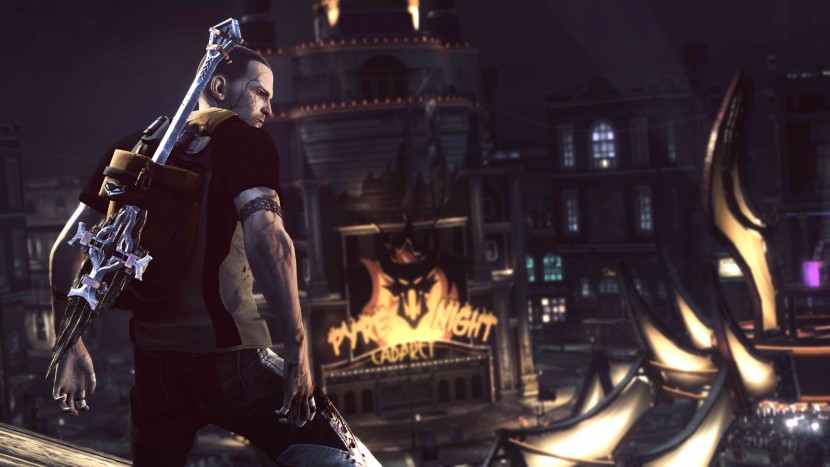 Fans of the series will have seen the New Marais environment before, but the atmosphere has been cranked up a notch for the Pyre Night festival. The people wander the streets with grotesque masks and neon glowsticks, fire jugglers perform and music blares from random parts of the city as fireworks light up the sky. The atmosphere is perfect, taking you through subterranean tunnels and graveyards as well as the inner city. Fans of Infamous 2 may clamour for the other half of the island, but I honestly didn’t feel that New Marais was suddenly small.

The cut scenes are fairly minimal and keep to the usual Infamous style, with Cole and Zeke providing some good banter throughout the game. The music is either a non entity or kick ass vampire killing tunes, and there are plenty of moments where everything comes together to make you feel like a proper undead butt kicker.

BUT – where’s the blood? Sucker Punch promised a darker take on the Infamous world, but no one seems to bleed when getting their throat torn out. It’s a shame that the game was probably toned down for a younger rating – can we have a patch with a nice little blood toggle please?

Festival of Blood is a strong shot of Infamous gameplay. The vampire twist is made to work by letting the player in on the supernatural action, and as Zeke says, Cole is kinda badass as a vampire! Fans of the series should have no hesitation in picking this up, and it would serve as a great introduction for newcomers to the Infamous world.

Personally it’s nice to see vampires get a bit of the action – down with the zombies I say. It’s a rare thing indeed to be able to free roam in a New Orleans-esque city as a vampire who also happens to be an electricity wielding super hero. It doesn’t happen enough Sucker Punch, hint hint.