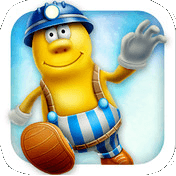 Overview
What happens when you kidnap a family full of Timbergrotes, save for the patriarch? Well, I would probably take off, go into hiding, and get as many mindless lackeys as I could to help slow down the daddy Timbergrote while I made my getaway. In Incredible Jack, you’ll take on the roll of Jack, that lone Timbergrote, as he sets out to take back his family from the Demon Prince. How does Incredible Jack, the latest iOS platformer from Chillingo and Belmac Interactive hold up? Let’s find out. 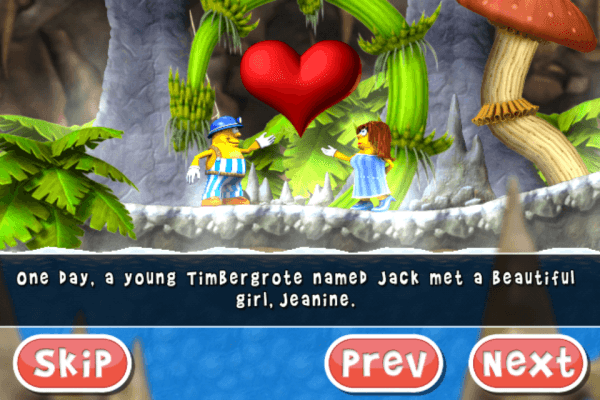 Story
Once upon a time there were the Timbergrotes. They were a hardworking group of treasure seeking coal miners, but they were known for being selfish. One day, Jack met a lady Timbergrote named Jeanine. They fell in love and had lots of children, and they taught the rest of the Timbergrote community that their selfishness wasn’t necessarily the best way to live.

The demons that were watching the Timbergrotes saw all of this and became angry. With the guidance of the Demon Prince, they kidnapped all of Jack’s family and ran off. Now Jack has to get his family back, taking down the Demon Prince and his minions in the process! 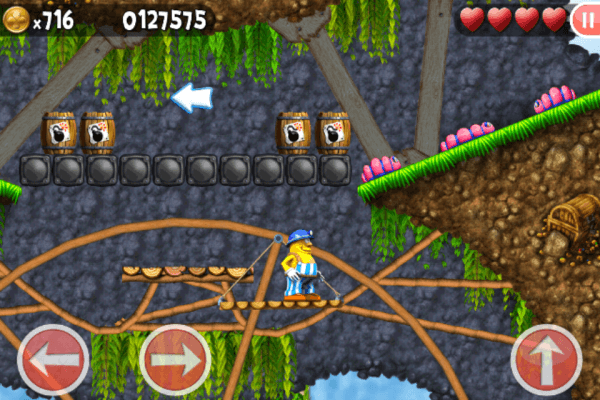 Gameplay
From the ground up, Incredible Jack feels like he has his roots firmly planted in Mushroom Kingdom. Jack is your standard platforming protagonist. He collects coins, takes out the vilest of monsters by jumping on their head, and has to navigate some tricky terrain to rescue his family.

The controls for Incredible Jack follow the same trend of so many other recent iOS platformers and it’s much better for it. The only on-screen buttons you even have access to are the left and right directional buttons and a jump button. Using these, Jack can move, push or jump on boxes and barrels, double jump to reach higher platforms, and more. The controls are also quite responsive, providing a concise sense of control.

Taking out enemies is as simple as a plop or two on top of their dome space. Bosses take quite a few more bumps to their braincage, but they’re not generally very tough encounters, especially compared to some of the levels you’ll have to fight through to get to them. 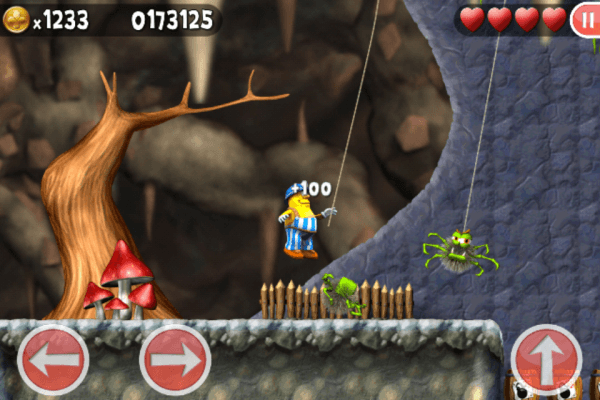 You can tell a lot of care went into the enemy and level design in the game. Well laid out levels often contain several hidden areas worth a few extra coins. Traps and jumping segments feel designed enough to give you a challenge without feeling overwhelming.

Incredible Jack implements a little bit of an RPG mechanic. This allows you to use coins you’ve collected throughout the levels to permanently upgrade health or lung capacity (for swimming) or to get one time use items like the coin-sucking magnet. It adds a few goals to work for, but it has a very sharp downside as well. 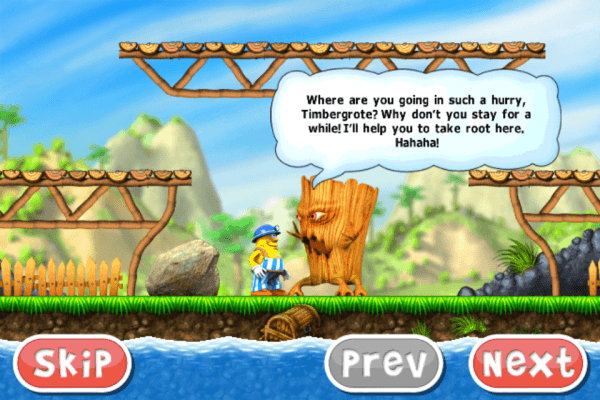 The downside to the RPG mechanic is that it opens the door to a minefield of micro-transactions. This wouldn’t be an issue if the game were free to play, but you have to pay the $0.99 to get into the amusement park before so much more is tossed at you. A few of the items are helpful but not necessary, but some of the transactions feel like they were designed by the Demon Prince himself.

You can spend real money to buy in-game coins. This seems fairly harmless at first – you can use the coins to upgrade your health and such – but upon using up your third free continue, you quickly discover how the coins will work against you. When you die, you’re presented with the option to cash in 500 coins for a continue. If you don’t, you’ll have to start the entire level over again, and some of the levels can get pretty tough. All in all, it just feels like a cheap shot to the people who were already interested enough to drop $1 on the game. 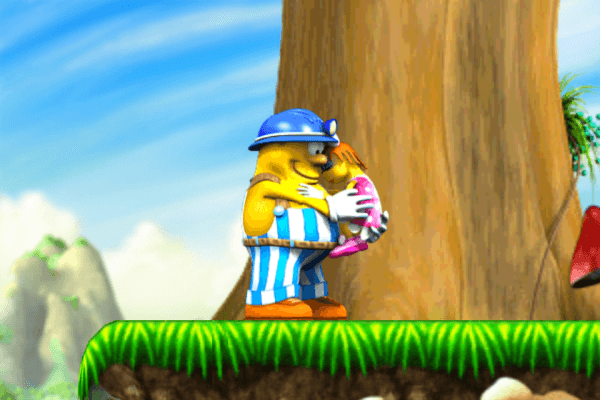 Visuals & Audio
Incredible Jack is a great looking game. The characters are all bright and vibrant. The world is also packed full of color. Character designs convey a fantastic sense of whimsy, like something from a Saturday morning cartoon. Each of the seven worlds (five to six levels each) feel distinctly different from setting right down to the enemies and bosses in each world. The game is also just downright cute. Watching Jack hug is son or daughter at the end of a level will just melt your heart.

For the most part, the audio design of the game is nothing remarkable. The short music clip played when you rescue your children, though, does a fantastic job to help enhance the “cute-ness” of the experience.

Overall
Overall, Incredible Jack is a solid, competent platformer for the iOS. The game boasts responsive controls, great, meaty level design, and some heart warming reunions. The game feels as though it suffers from freemium-itis, however. It’s hard to shake the feeling that some zones are artificially more difficult for the purpose of nickel-and-diming the folks who’ve already paid for your game in the first place. Regardless, if you want a meaty, fun platformer, Incredible Jack is definitely worth checking out. He may not be incredible, but he’s definitely fun.