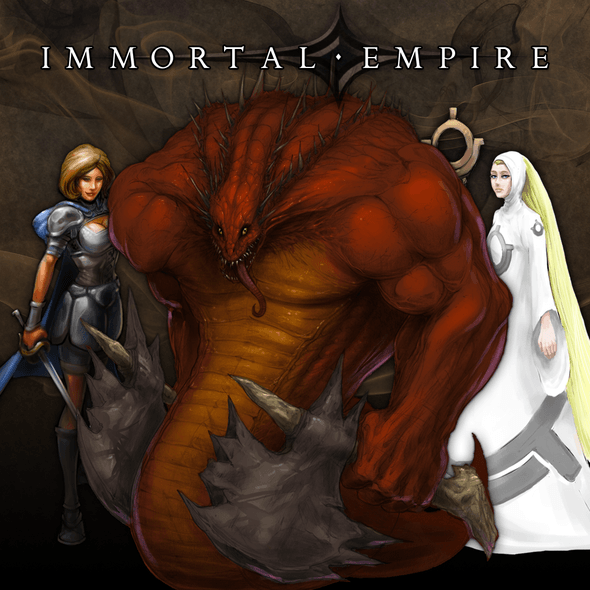 Overview
With what feels like a recent resurgence of isometric strategy RPGs (like Harebrained Schemes‘ Shadowrun Returns) the engines are primed for the genre to make a comeback. Enter Tactic Studios and their free-to-play browser-based game Immortal Empire. The game has been in the works for quite some time, but has it released during a proverbial gold rush? Should it be inexplicably slaughtered or forever raised on high? Let’s find out. 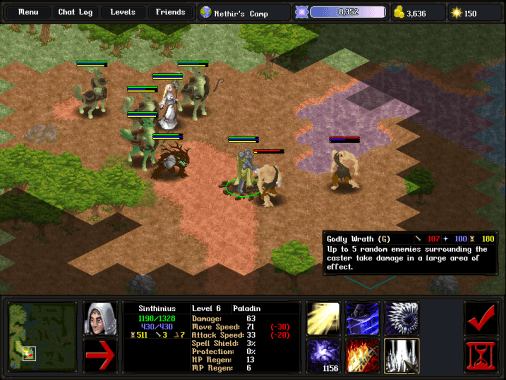 Story
You are an immortal. You’ve been brought back into the world by the elder you’re tied to, but the purpose behind it all is not yet clear. Following his guidance, you must accomplish missions. On one of these missions, you soon run into some other folks and learn that there is much more to your existence and its significance in the world that you ever would have thought possible.

Gameplay
Immortal Empire plays like you would expect most standard turn-based strategy roleplaying games to. There’s a definite rhythm to the cadence, though, and it can be easy to let yourself keep rolling between missions.

Before a mission starts, you’ll have the briefing with whichever NPCs fit the bill for the storyline at that point. It doesn’t always flow as smoothly as it could, but overall the storytelling and dialogue are solid. 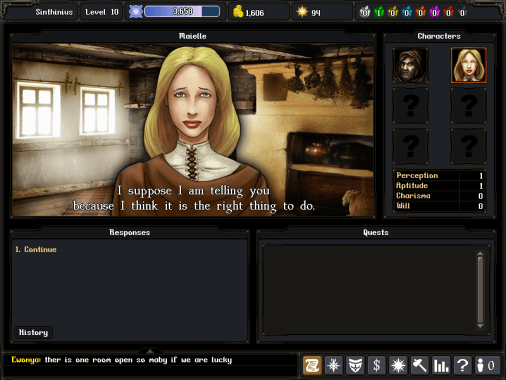 After you’ve received your marching orders for the upcoming mission, you can manage everything to prepare your team for what lies ahead. This includes getting getting or upgrading skills, purchasing and equipping gear, enchanting equipment if you want to, comparing your stats to everyone else in the world, and making any real-money microtransactions you want. You’re also welcome to jump into a chat room and chat it up with everyone else playing at the same time.

When you go out to the world map, there will be pins placed where you can travel to. Each location typically has five story missions that will be carried out on it. Playing a location will take you to the last map available to you on a given pin, but you have the freedom of joining games with other players for some assistance.

Once you’re in the mission, everything swaps to an isometric view with your team placed in front of you. You can choose to move any number of your team at the same time, though if someone will run into an enemy only one is typically sent out. Each character is given a specific “time” allotment per turn, and everything from walking to attacking and using skills takes time. When your party’s time runs out, any allies you have go and then enemies take their turn. 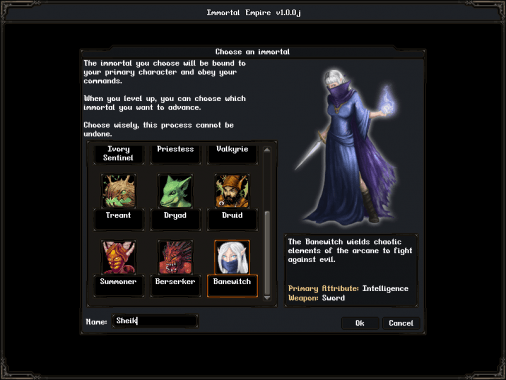 The game, rightfully, leans quite heavily on forcing the player to think strategically. Are you going to put your caster within range of a group of enemies so she can hit them or will your tank be out front absorbing the damage? One wrong move could lead to the death of a teammate, and the game itself is quite unforgiving. You didn’t mean to click that spot? Too bad, because your unit is sitting there now for better or worse. It can become frustrating, but it also encourages that you think before you act, and that’s a good thing.

You’ll start with only one immortal. Each type of immortal has a unique set of skills to play off of, so mixing and matching is a fun exercise as you learn what suits your playstyle best. As the story and your level progresses, you can earn additional party members. This offers up a unique choice, since experience is gained as a squad. Do you diversify your team, or keep building up the warriors already in your party? It can take a while to bring a latecomer up to everyone else, but that could make the difference in victory and defeat down the road. 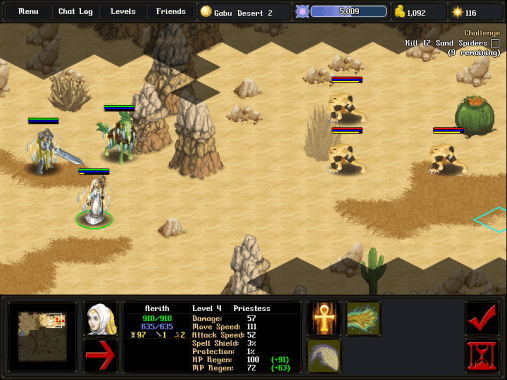 There are several forms of currency in the game. Defeating enemies and completing quests will reward you with “pure source.” This is essential your experience points. They’re shared between your whole team, so you’ll have to decide which characters need to level up to best contribute. On top of pure source, you can earn gold to purchase gear and “radiance,” which will let you purchase some unique items. Radiance is also the real-money currency, should you decide to spend your hard earned cash on the game.

As you work through the game, you’ll come to realize that you don’t have to play alone. If you want, you and three friends can all jump in and command your squads together to work through the story. This offers a fantastic way to play cooperatively while still getting a solid single-player experience. For those with a little more bloodlust, you can jump in and play competitive matches against other folks. 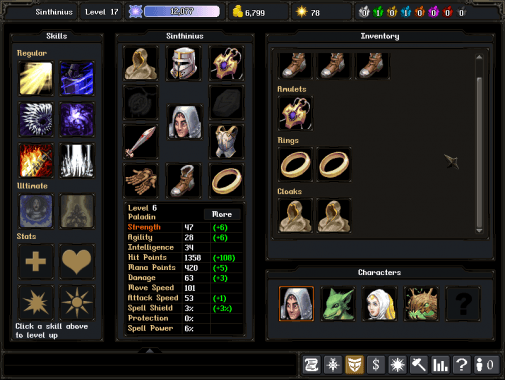 Visuals
By virtue of the fact that the game is restricted to internet browsers, the visuals are pretty tightly limited. No matter how large you grow your browser, the game window itself will never get bigger than an 800×600 resolution. This leads to a few inherent issues.

First, there’s only so much that can be pressed into that amount of space. For the general play area, that’s not a problem. Each mission, though, is equipped with a minimap that’s tremendously helpful. It’s quite small with no way to resize, though, and it can become busy quickly. Second, it lacks graphical fidelity. Nothing in this game looks as sharp as, say, Shadowrun Returns (which allows 1080p). Fortunately, the 16-bit art style works really well for Immortal Empire. Colors pop really well and everything looks distinct, in spite of the low resolution.

Apart from the limitations of the browser environment, Immortal Empire has solid graphical design. The menus you’ll switch through between missions are intuitive and crisp, with sharp looking icons representing each of the items and spells at your disposal. NPCs looks decent as well. 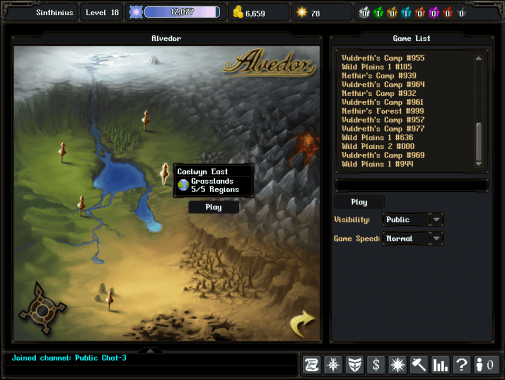 Audio
Tactic Studios are quite proud of the soundtrack they’ve created, and they should be. They’ve put together a solid orchestral fantasy soundtrack you would expect to hear accompanying a Dungeons & Dragons game or fantasy film like Willow. It runs the gamut from deep and mysterious to light and warm with a tinge of whimsy.

The sound effects are fit their job well, too. They craft the feeling that your habitation in the world is more than just that of an observer. It’s even more impressive when you realize such a small studio did all of the audio work from the ground up by themselves.

Overall
Overall, Immortal Empire is a surprisingly rich strategy RPG experience. The fact that it’s currently bound to a browser shouldn’t overshadow the solid gameplay experience that lies within. Though the graphical fidelity feels constrained, the game has a unique sense of charm. The sound design does a solid job immersing you in the world. Whether by yourself or with a group of friends, Immortal Empire is definitely worth a look.