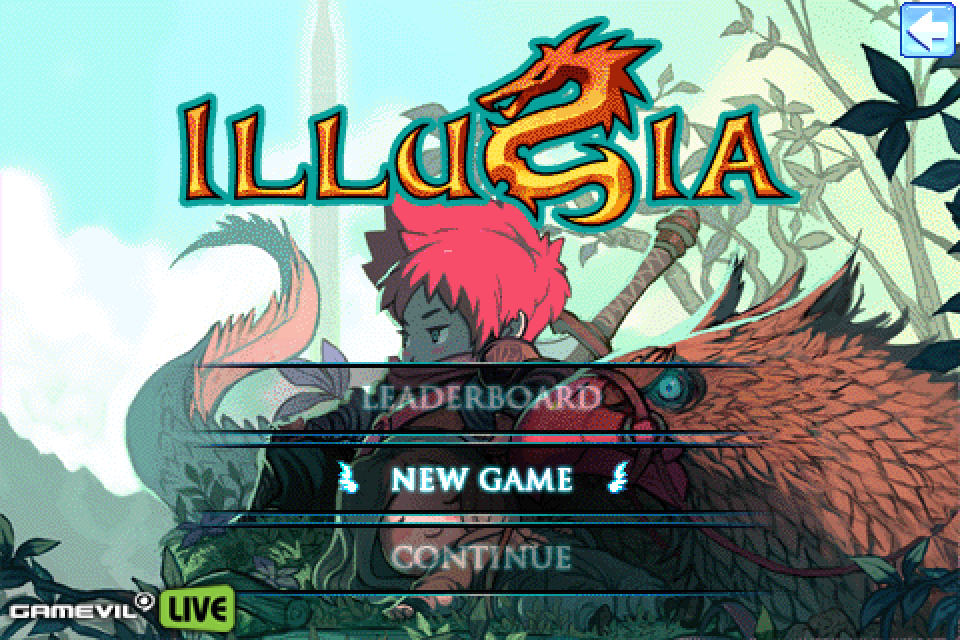 Among the masses of 3D RPG available on the App Store, the maker of Zenonia brought a new fresh air to the RPG scene by introducing their first 2D side-scrolling casual platformer RPG for the Apple handheld devices. ILLUSIA is the name, and it comes with the anime-inspired characters that we always see in Gamevil’s games.  If you still remember Maple Story for PC few years ago, I’m sure this game will looks very familiar to you (visually, at least). 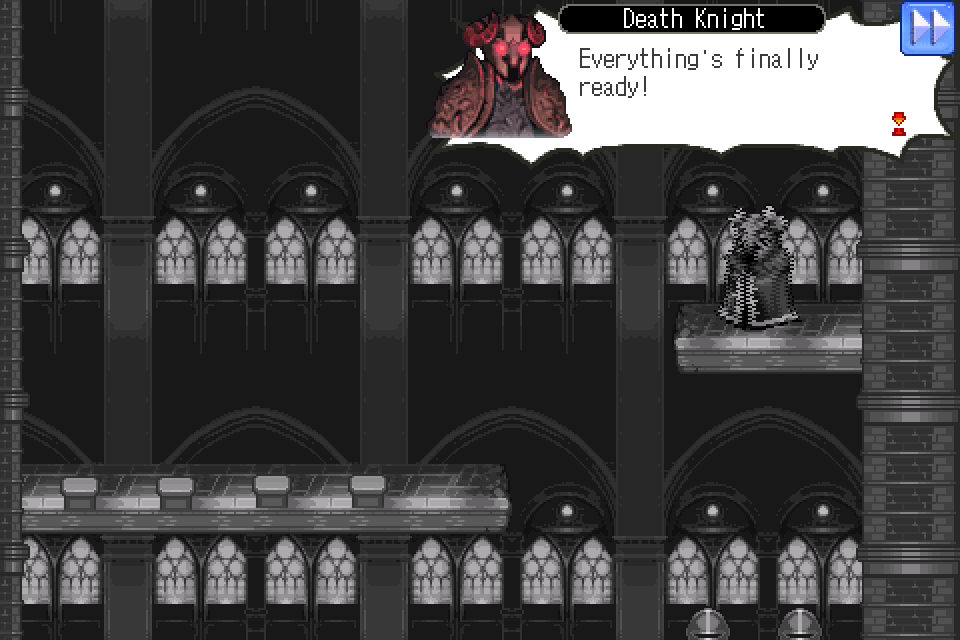 The storyline in ILLUSIA follows a pretty standard heroic path. It all begins as the peacefulness in the land of Aztaran is struck with a massive lightning bolt, followed by the appearance of a mysterious tower that no one could enter. This unknown tower remains a secret until two adventurers, a warrior and an archmage appears. Peoples in the village claimed that they have visited the tower. The story of the two adventurers soon become the tale which is so well-known among the children, that they dreamt of becoming such heroic figure one day. Years later, the secret of the tower is about to be revealed and horror is about to be unfold in Aztaran. This is where your adventure begins as you travel from town to town to uncover the mystery. 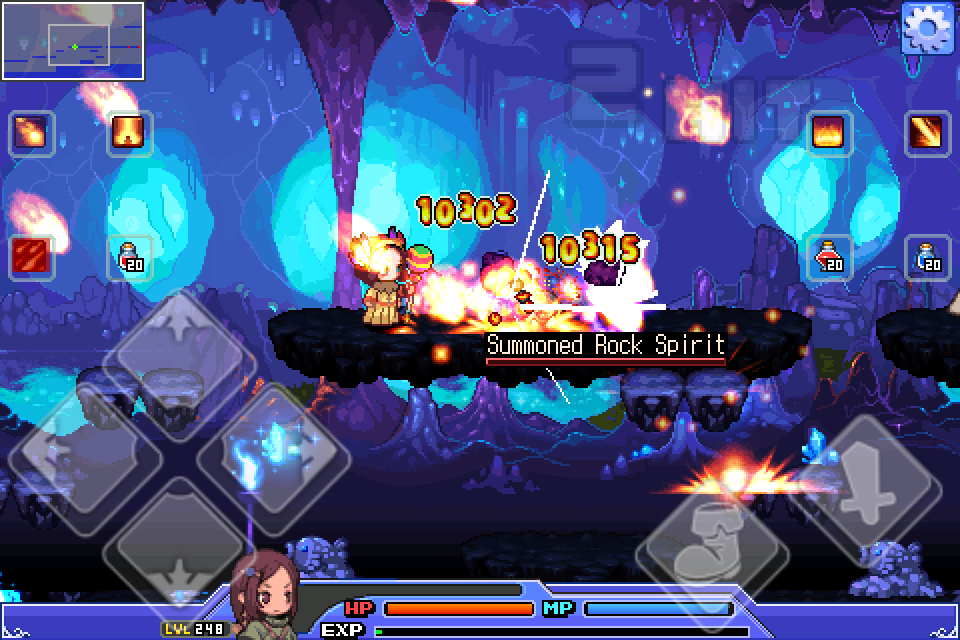 At the beginning of the game, the first thing you need to do is to decide upon which job class you would like to play for the rest of your journey in the world of ILLUSIA. If you like close-range combat, then Fighter would be your best choice. Otherwise, you can choose to be Magician, whom has long-ranged powerful magic skills at her disposal. Apart from the name and the gender of your character, choosing neither would not affect the storyline ahead.

As you level up, you would gain stat points and skill points to develop your character. I like the fact that the results of the stat changes are shown before you confirm the changes. When you become higher level, you would be able to change into other more advanced job classes; each comes with its own set of skills and buffs. With up to 14 job classes and literally hundreds of combinations available, you would not be bored to replay ILLUSIA over and over again.

Among other things, I especially love the quest system in ILLUSIA. Instead of randomly killing monsters, the main quest closely follows the storyline. You would be asked to search for a specific item in the fields or kills certain monsters for quests items in order for the story to proceed. With the storyline in mind, most of the quest requirements will makes sense, providing you the motivation to complete the quests. 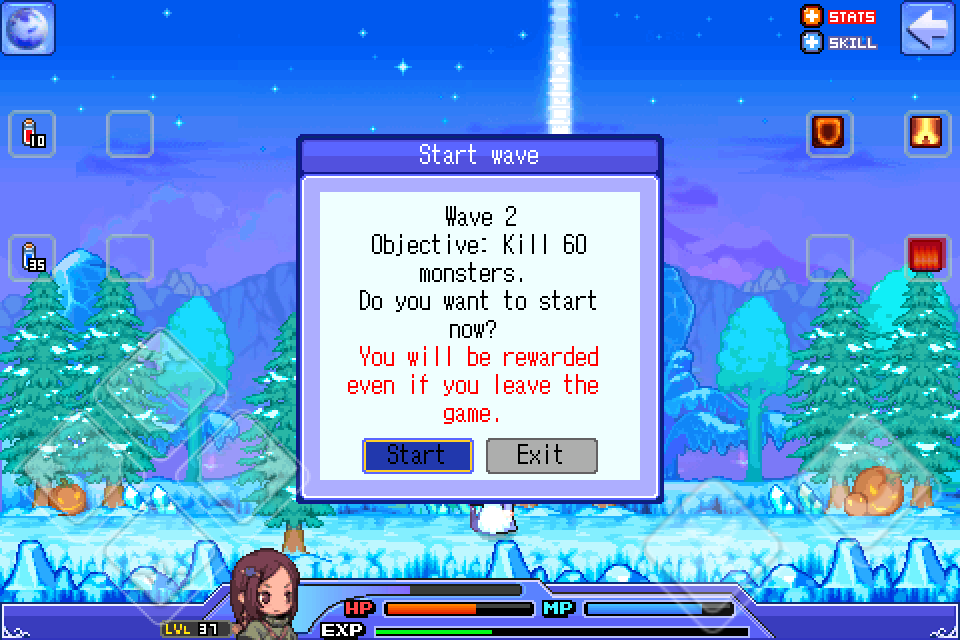 In addition to the normal gameplay, Gamevil brings the new Rush Mode and Mission Mode into ILLUSIA, which is accessible through the Special Officer in every town. These modes are a lot of fun and offer players something different to do apart from the normal questing and boss-beating. In Rush Mode, you would need to kill a set amount of monsters. The more waves you  completes, the better reward you will get. As for Mission Mode, there will be an assorted number of missions which will be updated from time to time. At the moment, there are two-way portal contest, survive for 2 minutes contest and achieve 50 combos contest. Of course, you will need to pay a small fee to enter these missions, but there will be rewards upon completion.

There are also online aspects of the game. You can store things online, send or receive mails from other players, manage your items in an auction house, or purchase premium items in the network shop. All of these things can be done through the phone booth placed in every town in the game. 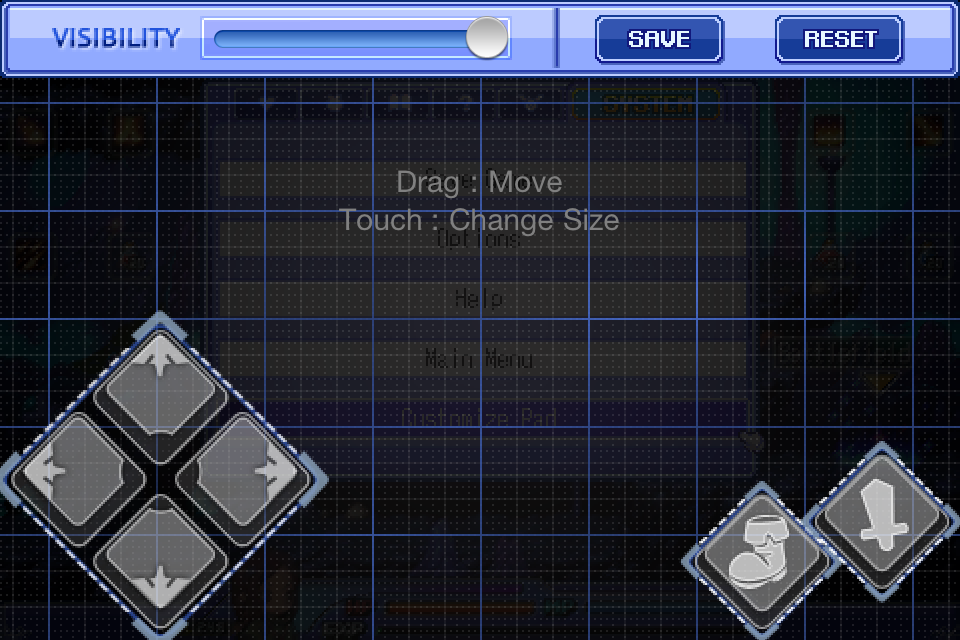 The control scheme here is nothing too different from Gamevil’s past releases. It comes with an on-screen D-pad, along with two touch buttons, the jump button and the action button. Movement with the D-pad is smooth as usual, but the jumping can get irritating at times, especially when you have to land on the very-small platform. It takes a while to get used to, nothing too biggy.

Most of the basic control mechanics are introduced in the tutorial, except for some, like dashing by double tapping a direction on the D-pad, and double jumping by tapping the jump button twice. It would be nice to include them in the tutorial, even though those are pretty common controls for gaming on the iOS devices. Everything else looks good though, except for the extremely tiny hotkey buttons on the upper side of the screen. There might be complaints from peoples with huge thumbs.

Like in Baseball Superstars 2011, the control interface here is customizable as well. You can make them bigger, smaller, more/less transparent, or move them around to wherever you would like them to be on the screen. Take some time to adjust the controls to better suit your needs. 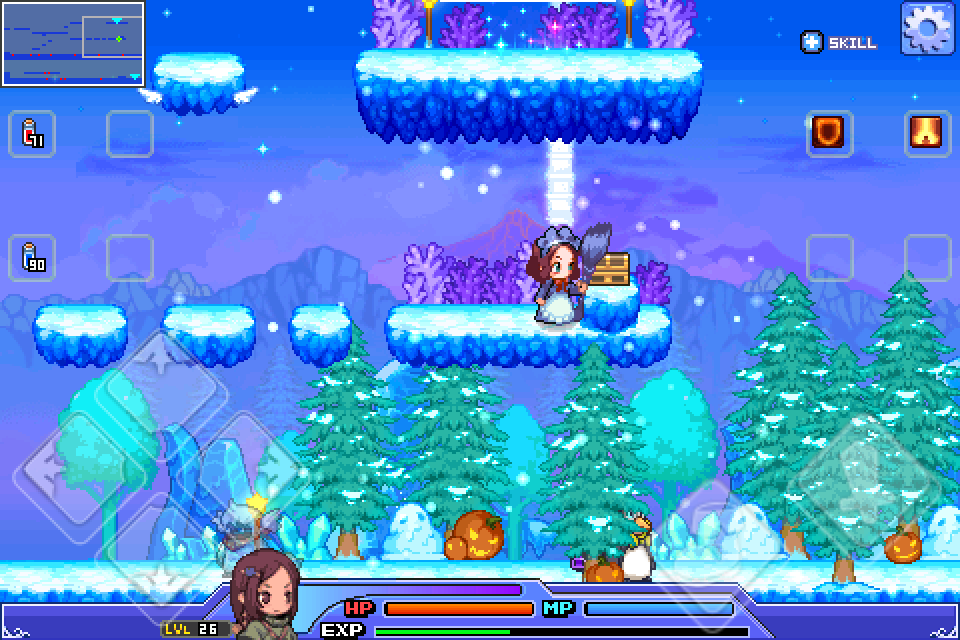 Graphics-wise, ILLUSIA is set in the beautiful game world where you will be constantly placed in some very pretty environment, from the snowy fields, to the heated Volcano area. You will be exploring the land of Aztaran from town to town, in seven distinctive colorful backdrops. Apart from the beautiful scenery, there are literally hundreds of costumes that change the appearance of your character, from a bunny suit to a maid uniform with broomsticks. Besides,  every detail in the game is beautifully presented, like the animation effect of the magic skills. Visually speaking, ILLUSIA scored a perfect ten.

On the other hand, the audio aspect of this game certainly needs more work as it seems to be the only element that keeps the game from being the perfect game. The background music awkwardly stops playing in various occasions (eg. when you are in a conversation with the peoples in the game.) With that said, it does have a good mix of soundtrack that helps set the mood in the game.

All in all, this is one great game that combines the best things of an RPG and an action platformer. Not to forget that ILLUSIA is very well-packed with content too. There is just so much to do as you level your way up to the maximum of level 250. Get this while it’s still fresh, you have my word that this will be one of the best 2D side-scrolling RPG you will find on the App Store.