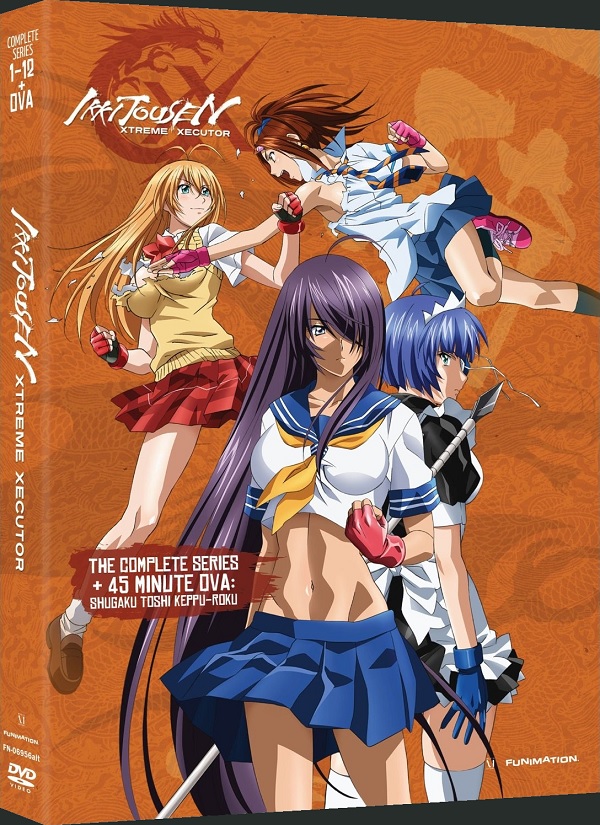 Overview
The entertainment industry loves revisiting history and making various tweaks here and there. Various war stories both modern and ancient are revisited and reworked to create a new story and it Japan absolutely adores creating stories from the Sengoku Era and the Romance of the Three Kingdoms.

With video games constantly telling us the story of Shu, Wu, and Wei, anime tends to spice things up by gender-bending characters or in the case of Ikki Tousen, making modern day students have to live out the conflicts from 1,800 years ago. So, now that the fourth season of Ikki Tousen has been released as Xtreme Xecutor, is it worth continuing this story?

Story
For those who are unfamiliar with the Ikki Tousen series, it is worth noting that Xtreme Xecutor features a number of flashbacks throughout the season and references a number of events that have happened in past seasons, so unlike Great Guardians it will be harder to jump into the series at this point. That being said, Ikki Tousen follows the premise that a large number of students in various schools in Japan have been given magatama that contain the souls of warriors from the Three Kingdoms Era. 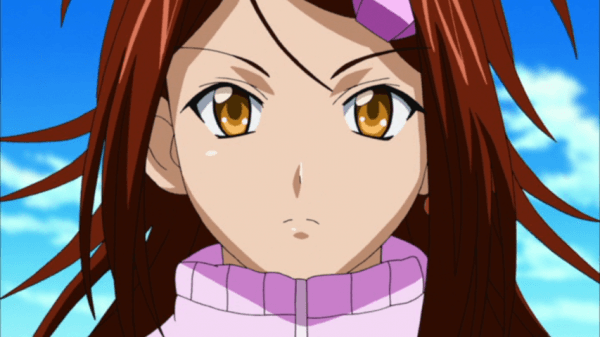 These students then become fighters and through the souls of these warriors they are encouraged to battle and follow the fate of their namesake. It is also worth noting that those familiar with the Three Kingdoms may feel a bit off about the names of some characters as the Japanese equivalents are used instead, such as Guan Yu being called Kan’u or Liu Bei being named Ryuubi.

Anyways, Xtreme Xecutor begins with the introduction of a brand new character to the series named Bachou Mouki, a strong but air-headed girl seeking vengeance for her brother who was slain by Sousou and is willing to fight against everyone in Kyosho academy to do so, a fate similar to her fighter counterpart, Ma Chao. After being soundly defeated, Ryuubi finds Bachou passed out in the rain and takes her in, realizing that their magatamas are linked together and she accepts her as a friend and part of the group. 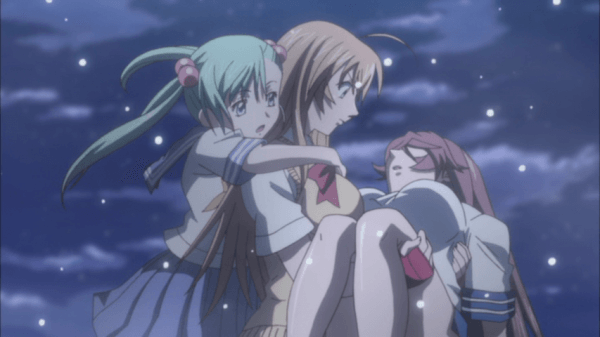 Ironically, this doesn’t last for long as Bachou witnesses Hakufu defeating a number of enemies in one strike and after some pleading, Hakufu takes her in as her first disciple. Of course when you get two ditzs together, especially one as strong as Hakufu, things are never going to turn out as simple as that as their training is not only odd but full of incorrect quotes and idiocy that is great for laughs.

However this focus on Bachou takes a back seat to the main storyline in Xtreme Xecutor, which revolves around a fake tournament being set up by a person named Kentei. After forming an alliance with the leaders of Nanban High, Kentei lures the strongest members of the three schools to a fake tournament in order to weaken each faction and leave them open for attack. 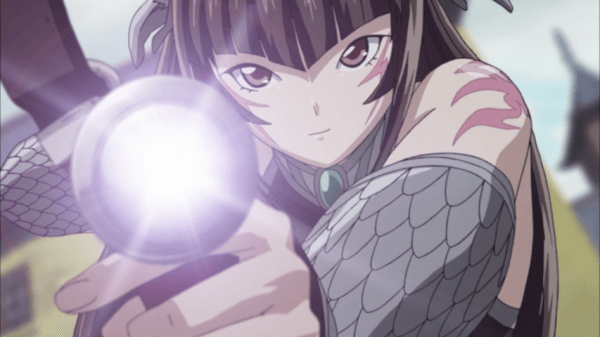 However Kentei’s plans go much further than that as a dark plan is revealed that will not only bring the curse of the fighters back to the forefront but make it harder than ever for them to try and overcome their destinies as they fight one another causing blood to fly and plenty of clothing to be destroyed. Viewers who may have been disappointed in Dragon Destiny’s lack of fighting will be more than happy with what is found in Xtreme Xecutor.

Outside of Bachou the majority of the fighters introduced in Xtreme Xecutor play the roles of villains that the already established cast have to battle against, though only a few members of the old cast actually receive major fighting roles. Hakufu has only one real battle while the majority of the action involves those from Seito Academy with Kan’u, Chouhi, and Bachou battling the most with Ryomou and  Kyocho fighting the rest of the time. 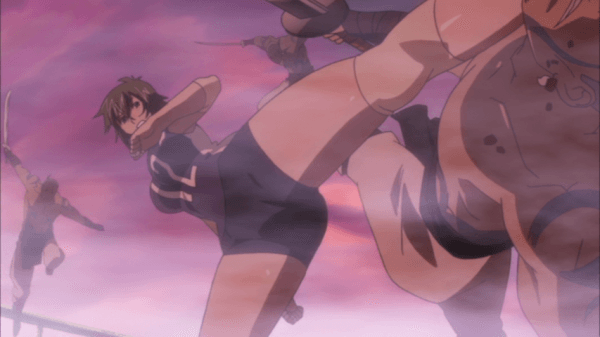 Despite placing the fighters in a dangerous situation and establishing a sinister plan, Kentei really doesn’t do much to push the overall story forward and outside of Banchou and some additional bonding in Seito, none of the characters are even developed any further than they were before. This means that although Xtreme Xecutor has plenty of the action fans of the series like and a little bit of time focusing on the characters, by the end of the season it feels like very little has actually happened as the series returns to the status quo held at the start of the season.

Visuals
Xtreme Xecutor: Xtreme Xecutor is exactly the type of show one would think about when thinking about an ecchi action anime. Almost every time that a female character is fighting there is a high chance that her chest will be exposed at some point in the battle and it is an absolute given that there will be plenty of panty shots all around with low angle shots giving viewers plenty to see. Now I’m not saying that it is a bad thing, just that at this point viewers should know what to expect from the series. 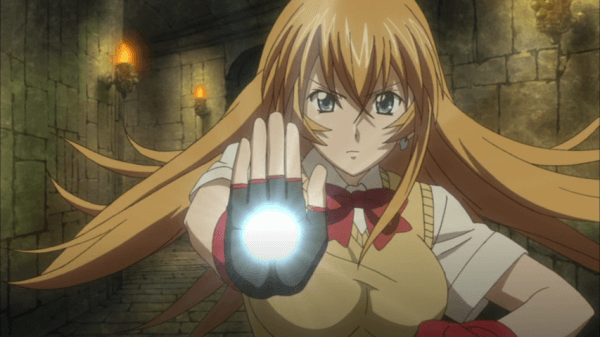 As for the character designs, they remain the same looking as their classic styles and the newly introduced characters have a bit of variety to them, though the generic enemies that appear feel like a bit of a shortcut as their designs are minimalistic and almost all look the same. Thankfully the action sequences are impressively handled and only on the rare occasion did I notice a drop in animation quality during these scenes.

Audio
Again one has to give credit to FUNimation for bringing back the cast of the original Ikki Tousen English dub to continue working on the series as longtime viewers will not notice any changes. The new characters are voiced well and fit in with the rest of the cast, though it does seem like there were more instances of overacting lines this time around. 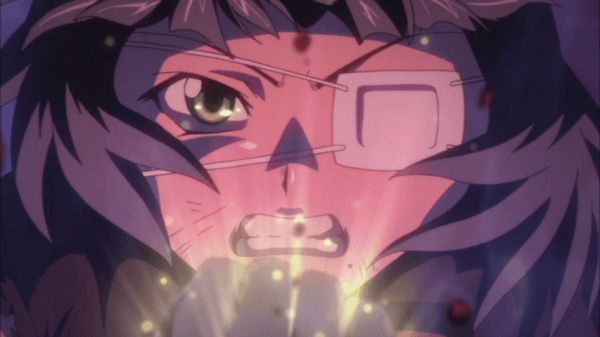 The background music is rather simplistic and similar to what fans have heard before in past seasons as the same theme is used throughout. The opening theme “Stargazer” by Yuka Masuda is a standard opening for a series such as this and works well and the same can be said for the ending theme “Endless Soul” by Aya Endou and Masumi Asano, the Japanese voice actresses for Bachou and Hakufu.

Extras
Now the release if Ikki Tousen: Xtreme Xecutor comes with not only your standard FUNimation bonus features but also the forty five minute OVA Ikki Tousen: Shugaku Toshi Keppu-Roku. More on that in a moment, as for the standard extras there are two commentary tracks, one for episode 1 featuring Jonathan Klein, the voice director, and Cherami Leigh, the voice of Bachou, and one for episode 2 featuring Jonathan Klein again and Rachel Robinson who voices Kan’u. 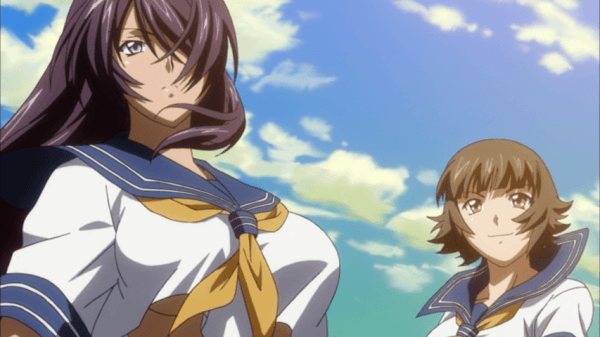 This is followed by the “Six Dreamy Viewers” which are six shorts that are eighteen minutes long total and are presented in Japanese dub only. These shorts are about a specific character dreaming about a strange sequence of events though most of them are not quite as lewd as one would expect. These are then joined by standard inclusions such as a textless opening and closing theme and promotional trailers.

As for the OVA, it is also given a full forty five minute commentary with Jonathan Klein, once more, Jessica Calvello, the voice of Chouhi, Georgette Reilley, the voice of Kakouen, and Michele Knotz, the voice of Chou’un. This OVA is a completely separate story from the Xtreme Xecutor and follows a number of the fighters as they travel to Kyoto to regain their energy and grow stronger. 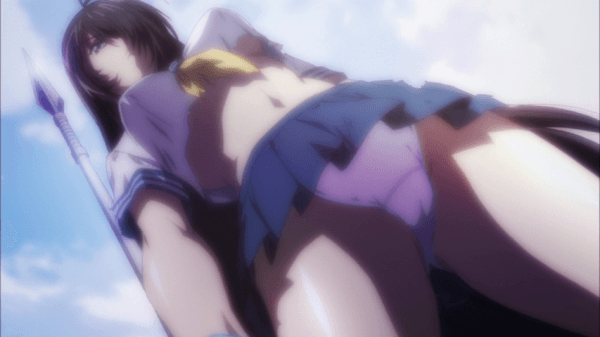 This OVA features higher production values than the basic series and looks better overall and it actually feels like it goes back to the roots of Ikki Tousen by featuring extremely impressive looking fights, with the main two of battles are accompanied by some stellar background music, with vocals, that make the OVA an amazing highlight even if it doesn’t actually add anything to the series overall.

Overall
Ikki Tousen: Xtreme Xecutor introduces a few new fighters and provides viewers with a new conflict but ultimately feels like it goes nowhere in the end as the series ends with no major advancements and only minor character growth. That being said, this release does contain plenty of the action and fan-service that fans of the series love and the inclusion of the OVA is a great addition to the release as it not only returns to the root of the series a bit but also features some highly entertaining battles.