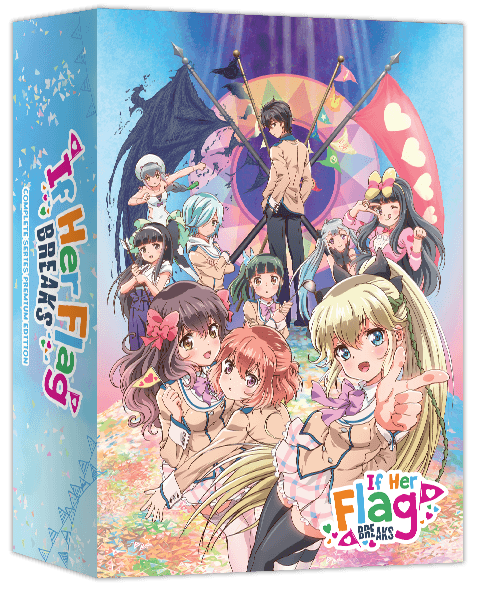 Overview
In many forms of entertainment there are certain “flags” that can be raised. These flags are usually a pre-cursor to certain events that will happen down the line thanks to certain things that are said or actions that are taken by the characters in a series. While many viewers can usually tell when a flag has been raised, what happens when a character in the series itself can tell? Well with the release of If Her Flag Breaks (Kanojo ga Flag o Oraretara) by NIS America, we have an anime that explores that idea.

Story
On a standard day a group of businessmen and students are gathered at a crosswalk waiting to head towards various destinations. To pass the time one of the businessmen talks about how if his deal is successful, he will be proposing to his girlfriend. As many would suspect, this leads to a terrible situation where the dreaded Japanese truck swerves out of control and is about to crush those standing at the crosswalk. At the last moment, a boy whispers in the businessman’s ear and all disaster appears to be averted. 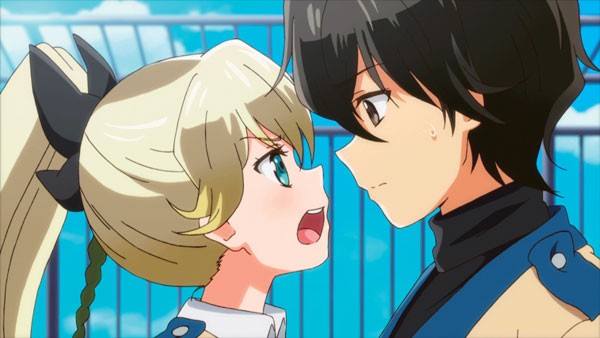 One of the students that was spared a brutal death happens to be Nanami Bladefield, the thirteenth princess of a small principality in Europe. With a desire to leave no mystery unsolved, she quickly finds that that mysterious boy who seemingly saved their lives has transferred into their school and is named Sota Hatate. Being a fairly attractive and mysterious transfer student, Sota attracts all kinds of attention from the class as some try to invite him to their club while others simply try to be friendly. Despite this attention Sota bluntly turns down everyone that approaches him.

After pursuing him during a break, Nanami learns that Sota has the ability to see flags in the world. This means that he is capable of seeing when someone is trying to become his friend or even when they are about to die as there can be flags for every type of occurrence. He gained this ability after being the lone survivor of the doomed Premium Ambriel cruise ship and has since prevented himself from allowing anyone to grow close to him. 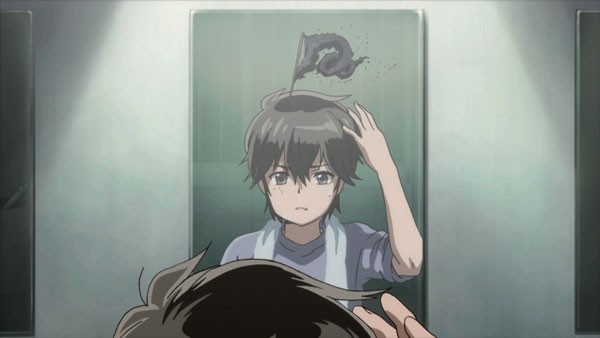 You see, although Sota may have the ability to break flags and save the lives of others, he keeps secret the fact that he has his own giant swirling death flag that remains unbreakable. However, once arriving at the school and meeting Nanami, he learns that there may indeed be some hope, though this hope means he must gather many different characters, all of whom happen to be girls of course, in order to unlock the truth of the world in what becomes an incredibly rushed series that completely jumps the shark near the end.

If Her Flag Breaks feels like a standard harem series with the twist of being able to see the flags of potential love interests when everything begins. The series follows a fairly predictable formula throughout the first half of the series as numerous girls are introduced, a handful of which happen to know Sota from the past and others that simply take an intense liking to him as soon as he meets them, and then dealing with a certain challenge that is thrown their way in order to “complete” a route or “advance the story” as some flags clearly state. 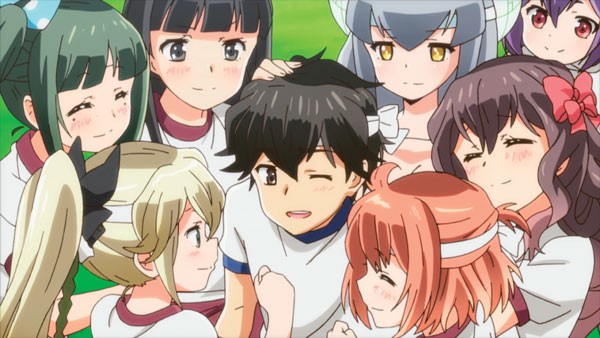 This formula starts to fall by the wayside due to the nature of If Her Flag Breaks attempting to force eight volumes of light novel content (at the time of the anime’s airing) into a twelve episode series and finding its own resolution. As the series progresses we barely are given any details about the lives of some of the girls that come into Sota’s life, with at least three of them choosing to help out of practically nowhere once everyone gathers together for the finale. In fact, the only characters that do receive any major development happen to be Sota himself and Nanami as they play the central role while the rest of the cast simply serves as their support and to add extra humor to the series.

Thankfully, the humor and the character types in If Her Flag Breaks happen to be some of its best elements. While the story may leave something to be desired, especially once things start going off the deep end once Sota’s flag abilities start to grow too powerful, the various girls and one excellently handled trap makes that ride a bit smoother. While they may fit into the various archetypes, such as the tsundere, childhood friend/obsessed older sister, the rich girl, potential yandere, and many more. 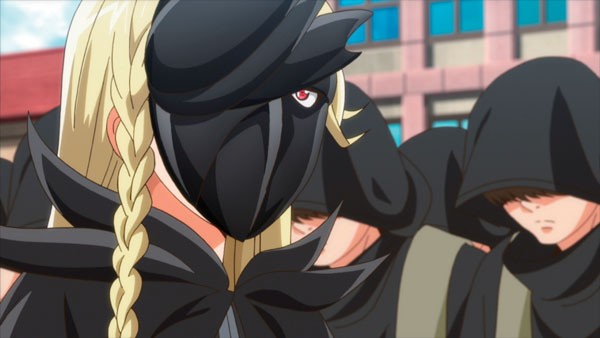 Through the flags that constantly serve as amusement throughout the series these characters are all handled in a manner that makes these familiar archetypes feel fresh and make If Her Flag Breaks a very humorous series that is rather surprising at times, especially since the rushed story raises the stakes immensely and throws plenty of random twists at viewers in an attempt to bring things to a close in a rather weak manner.

Visuals
Animated by Hoods Entertainment, If Her Flag Breaks was created using a pastel color arrangement that gives the series a unique feeling to it and a little extra flair to the designs of some of the characters. The animations are handled rather nicely with a wide-range of flag appearances and character expressions, though some later action sequences do appear rather simplistic in nature despite the wide-range of classes being presented at the time. 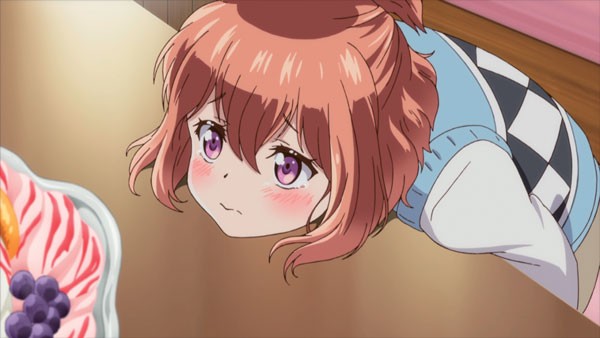 Now some of the character designs are rather unique looking and the cast of course features a number of adorable girls, however a number of the main characters are presented in fairly generic fashion, with the only major standouts being Kikuno, Ruri, and Megumu. The latter of those characters is actually one of the best trap characters I’ve seen in quite some time as his appearance is of course used for plenty of humorous gags but he also tries to at least act like a man at times, even if it simply results in laughs or the rest of the cast forgetting that he is a guy entirely, leading to some great facial expressions.

Audio
NIS America is releasing If Her Flag Breaks with only the original Japanese voice track. This works well however as the cast of characters handle their roles quite well, with Nanami’s voice actress Ibuki Kido handling her character archetype in a way that I’ve only seen performed in such a great manner that I nearly mistook her for Rie Kugimiya at first. 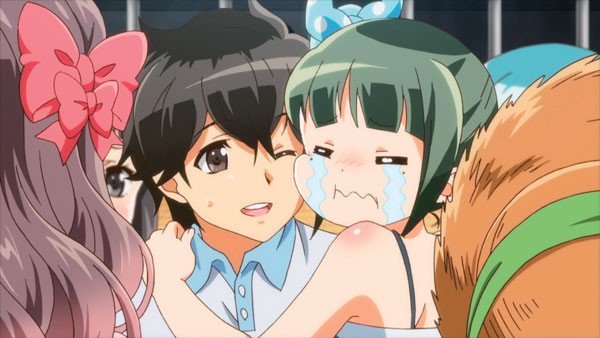 As for the soundtrack, the series features plenty of fluffy tunes with a smattering of more dramatic themes when necessary. The opening theme “Cupid Review” is performed by the Japanese voice actress for the last girl introduced in the series and while it is fairly forgettable, it does have a certain charm to it, while the ending theme “Kanojo ga Flag o Tateru Wake” is performed by Yell, which is made up of most of the female cast and is accompanied by some outstanding artwork.

Extras
It is worth noting that although If Her Flag Breaks has been given the Premium Edition treatment, that this release does not contain the Christmas OVA that was released separately from the main series. That being said, the series has been given the same special treatment that NIS America has been giving all of their series over the last year by releasing a DVD-height large chipboard art box containing both Blu-ray cases as well as the hardcover art book for the series. The on-disc extras for the release feature clean versions of the opening and ending themes, trailers for the characters, commercials, and Japanese promotional videos. 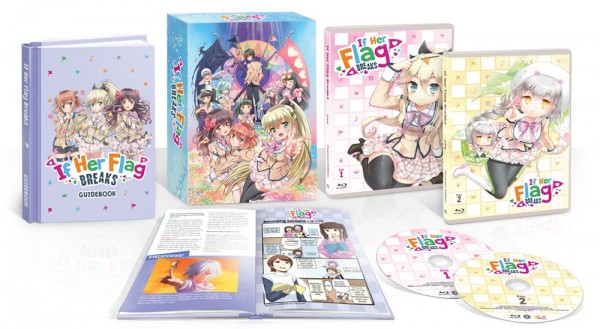 As for the physical bonuses, the heavy chipboard art box features colorful artwork on both sides, with one side focusing primarily on the girls that are introduced and spend most of their time in the series while the other side is even more colorful and features the entire cast with both images set against a flag filled backdrop. The hardcover art book actually has been given something of a twist this time around as rather than spend a number of pages providing basic episode descriptions, NIS America has created a “Guidebook” as it is called that contains artwork and introductions for each of the characters, a number of the colorful eyecatches found throughout the series, mini-omake panels for the recording sessions, and a large number of extended interviews with the original cast members that goes above and beyond what we’ve seen in the past for these artbooks.

Overall
If Her Flag Breaks presents itself as a harem series with a twist and it works well in that regard by providing plenty of humor and a great cast of characters that really shine past their generic archetypes with the help of the flag dynamic. The plot does begin to move quite quickly throughout the second half of the series, so much in fact that it becomes rather clear that some elements were crammed in in an effort to rush the series to a conclusion that will leave many wondering exactly where the story was meant to go originally, but despite this lackluster ending fans of the genre will find If Her Flag Breaks to be a humorous and unique offering that contains some rather surprising twists.
Capsule Computers review guidelines can be found here.