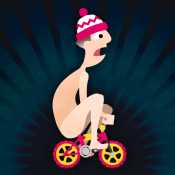 Overview
Chillingo are no strangers to bringing out unique games that few others would be reticent to touch. Now, Damp Gnat has brought out the sequel to Icycle, a puzzle platformer that has you cycling (literally, on a bicycle) through environments, simply trying to survive. How does the sequel, Icycle: On Thin Ice, hold up? Will you lose yourself in time playing it or should it have stayed in cryostasis? 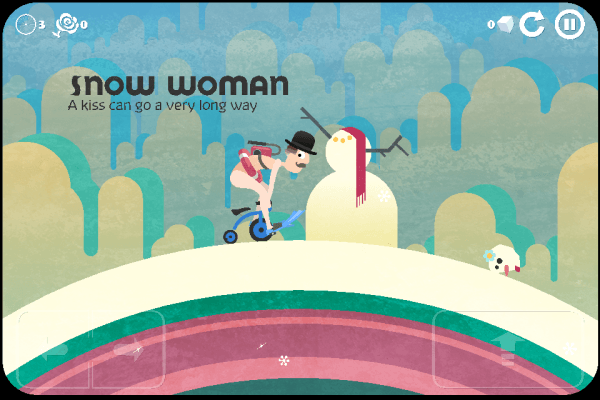 Story
The world has ended. For all intents and purposes, the world we once knew is now no more. Dennis has survived, deep asleep in his cryogenic chamber. How did he get here? Where is everyone else? Where are his clothes? He’s awoken to an ice age, naked as his name day, and the only other thing available to him is a children’s bicycle. After a brief daydream, he sets out to explore and see what he can find in this forsaken world. 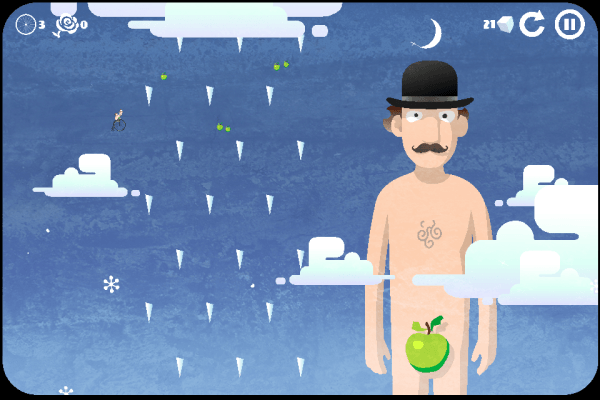 Gameplay
Icycle: On Thin Ice is a puzzle platformer. You’ll controller Dennis as he rides his bicycle across the frozen landscape with nothing to aid him but an umbrella he found to slow his fall.

The controls are incredibly straightforward. You can move left or right and jump. In midair you can press and hold the jump button again to deploy your umbrella. That’s pretty much it. In terms of control, it feels mildly reminiscent of a Super Mario game.

Unlike Mario and his adventures, there are no enemies or powerups in Icycle: On Thin Ice. Literally everything has been destroyed. The only things you’ll have to worry about now are environmental hazards that stand in your way as you work to your next objective. Jagged icicles, heavy falling objects, ice flows that push you ever faster through increasingly tight spaces, and more stand to keep you from progressing. No goombas here, but Icycle is better for it. 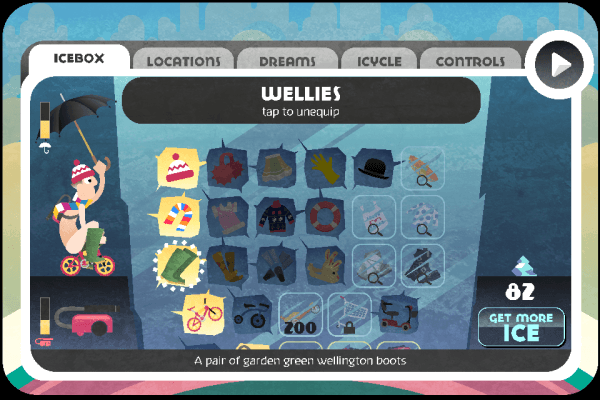 The level design is fantastic. There are 20 levels to work through and each offers something unique. Nearly every level has a dynamic aspect to it that keeps you on your toes. The screen can change wildly in front of you, keeping the platforming interesting without ever feeling overbearing. It’s one of the game’s strongest elements. The levels also have multiple objectives, so there’s a significant bit of replay value in each level.

The game has a currency system, believe it or not. Dennis can collect ice blocks as he traverses the levels. These can be used between levels to buy various knick knacks and upgrades. Clothes are included in this (funny hats, shirts, and boots), but oddly enough, he’s never able to find pants. You can also upgrade your bicycle, umbrella, and even get a vacuum to help collect more ice blocks. 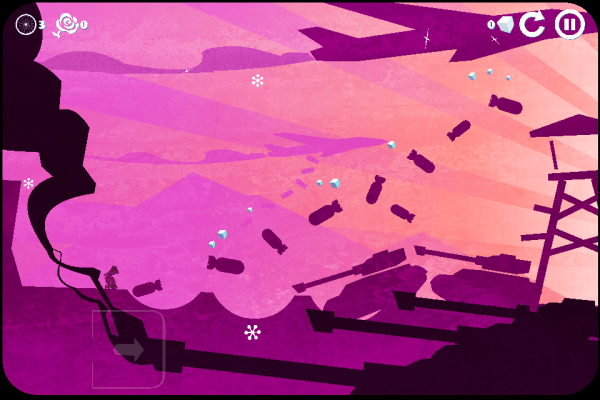 As with virtually every Chillingo game, there’s a pay element players can choose to use. You can purchase a huge bulk of ice blocks using real money. Even after playing through the entire game, though, I can confidently say it’s never really needed. You may want to circumvent the time it takes to earn everything, and that’s fine, but you never feel forced to spend money to progress.

Visuals & Audio
Icycle: On Thin Ice has a wonderfully unique visual style to it. The colors are bright and vibrant, conveying a sense of whimsy amidst total desolation. The animation is slick and fluid, even on older hardware. There are some small, detailed animations you could miss on occasion, but seeing them adds a great sense of flourish and engrossment into the world. 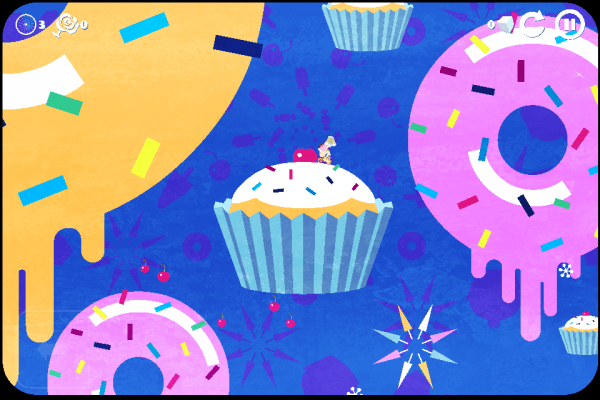 The audio design in the game is fairly minimalistic, but it serves to feed the sense that you are alone in the world. There’s a total lack of music outside of the intro, but it’s in favor of the sound effects, which really convey the world well. The constant squeaking of the bicycle, the howling winds, and Dennis’s bewildered cries do a wonderful job of providing  an audio landscape of a frozen apocalyptic landscape.

Overall
Overall, Icycle: On Thin Ice is a fun experience that’s well put together. The visuals are fun and vibrant and the sound design does an excellent job conveying Dennis’s plight. The controls are simple and responsive, the level design is interesting and fun, and the unlockables are amusing. Icycle: On Thin Ice is an amusing, engaging ride through the end of the world that anyone can enjoy.