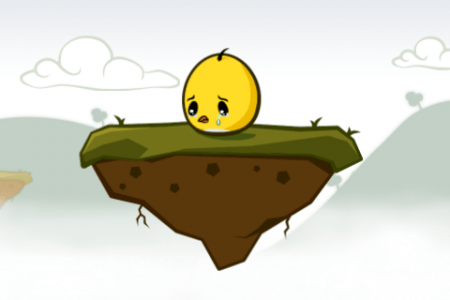 A game based on a large yellow bird who has been separated from her young and is desperate to go to whatever means possible to retrieve them? That sounds a little familiar. But then most of the characters and stories behind apps blur into each other after seeing the tenth cute cartoon animal. Does I Won’t Fall separate itself from the herd despite its similar aspects? Or does it simply join the crowd?

Your mother bird has lost all her children! They’re all stranded in little floating bits of land. No idea how, or why, or why they can’t come back to her, or why she can’t simply fly to them instead of just hopping small distances. This game requires a little suspension of disbelief. 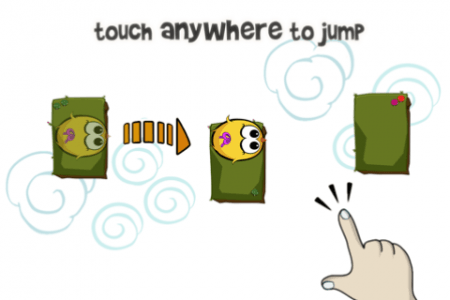 Moving on from the odd goal of the game, the gameplay is extremely simple, You have to make it from where you start off to where one of your many wayward children is by tapping the screen to make your bird jump forward and (hopefully) land on a platform. There’s no tilting, shaking, swiping, etc. Just tap at the right time to get your Momma bird over to the other side. 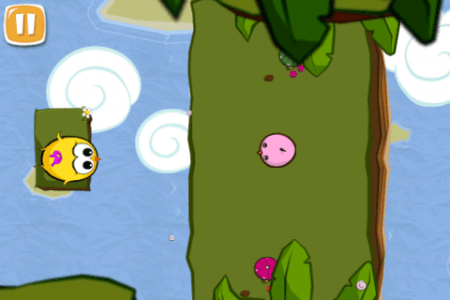 The obstacles get more complex as time goes on, however in some instances you could bypass them easily just by hopping immediately from one section to the next. At the end of the level you are marked out of three stars (ah yes, it operates under the three-star grading system, another iOS classic). 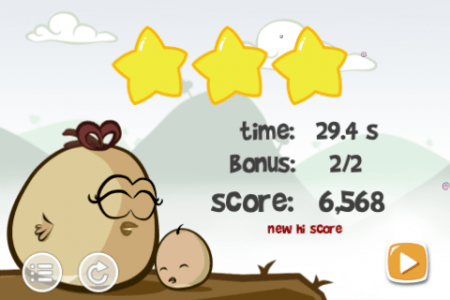 The point is to do it as quickly as possible while also collecting tiny bubbles so you can get the bonuses. That’s the only real grading system there is, the time you take and the amount of bonuses in the level (you’ll see how many there are and how many you’ve gotten so far in the top right of the screen). 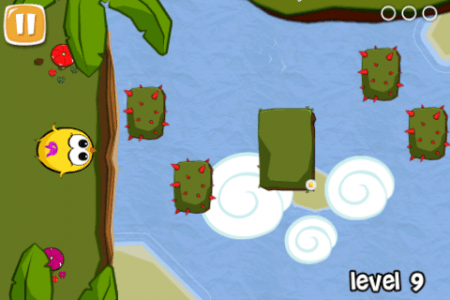 The game has an achingly simply concept that some of you will love for those random bored times when you just want to play a really quick game of something, but others will hate because it gets repetitive after a while. There are 45 levels, and I gotta tell you, after about level 10 I got quite resentful towards these lost little birds. 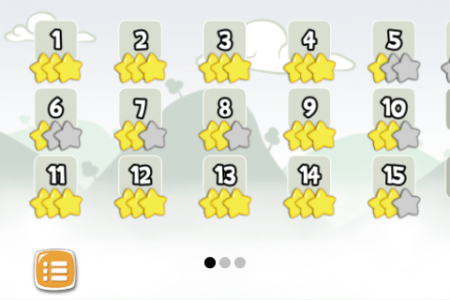 I’m just saying, if they got there in the first place then they should figure out how to get back. Also, you have 45 kids and you lose them all? Please tell me you have fifteen sitting at home being babysitted by someone. Unless it’s the same kid, but the intro cut scene seemed to suggest they were all different. I’m just glad this isn’t an accurate representation of parenting. Otherwise parents wouldn’t be able to support themselves, they’d spend the whole time chasing around their kids who are stranded on floating pieces of land.

The game I Won’t Fall is quite stylised and has a charming little quality. Each time you win a little graphic of mother and child reunited which is sweet. It’s simple, yet cute. However, the soundtrack for the game doesn’t suit it at all. It’s this weirdly sweeping orchestral music that has nothing to do with the game.

This game has the simple gameplay, the cute cartoon characters, the missing young, but unfortunately it just doesn’t have that special addictive quality that makes these types of games so popular in the casual market. While a little interesting it doesn’t have that certain something that drives you to beat it, it just falls sort of flat and hollow.