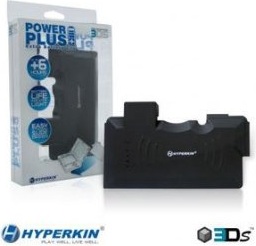 Although Nintendo’s 3DS handheld may be the first and currently only handheld gaming device to sport glasses free 3D technology, the handheld has one tiny problem with its hardware. What I am talking about of course, is the battery life of the handheld. Even running idle the Nintendo 3DS can quickly run low on battery life in only a matter of hours, let alone when being used to play a game or watch a video.

This of course means that either an owner of the 3DS must keep their 3DS constantly charged in its cradle or run out and purchase some sort of peripheral that would help prolong their gaming experience. One such peripheral recently released by Hyperkin is known as the 3DS PowerPlus. The PowerPlus is a bit unique when it comes to extending 3DS battery life, in the fact that it is actually an extension to the system instead of a replacement battery for the one that comes with the 3DS. Now at a price tag of $24.99 how well does the 3DS PowerPlus perform?

Hyperkin’s 3DS PowerPlus is a slip on charger which is quite convenient as it is easy to slip on and moderately easy to take off of the 3DS. The PowerPlus itself is rather lightweight and has certain openings on the sides which allow the user to still use all the sliders that they need, though the opening for the volume slider is practically no bigger than the slider itself which makes it a bit of an annoyance.

Although it may also have a rubber-like coating which makes it easier to hold onto, there is a problem with the design of it. When you attach it to your 3DS the area where you charge the PowerPlus is placed right next to the R shoulder button and this can get in the way for those who hold their 3DS with their fingers wrapping around the sides. The charge area extends about a half an inch past the 3DS itself which also makes it a bit larger for your cases and can make use a bit uncomfortable if you have to change the standard way you hold your handheld. 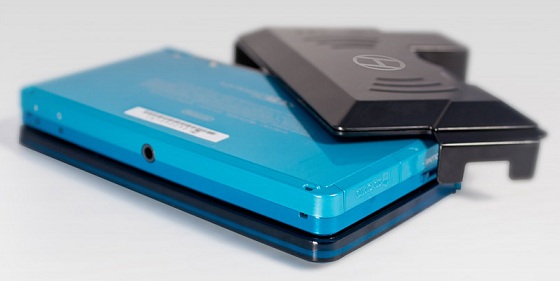 Now the main feature of the 3DS PowerPlus is of course the fact that it extends the battery life on the 3DS. It does this by allowing the 3DS owner to slide it on to the back of the 3DS itself and, if their 3DS battery begins to fall into dangerous levels they can turn on the PowerPlus with a tiny switch on the charge area of the PowerPlus. This then uses the charge on the 3DS PowerPlus itself and not only powers the 3DS off of itself but charges up the battery.

Now before I go into how well the 3DS PowerPlus performed with this task, I must mention how it can be charged on its own. With the purchase of the 3DS PowerPlus, buyers will receive a USB charger that must be used either on a computer or laptop or with a converter of some sort to plug into a car or a wall charger. While this may make the charger a bit more versatile, it also presents limitations. The lack of a wall charger with purchase is a major detriment to the 3DS Powerplus and having to buy another converter simply to charge it in more than one way is an unneeded hassle.

A neat feature about this peripheral however, is the fact that it can be removed and charged entirely separately from the 3DS itself. This means you can fully charge your 3DS handheld and also fully charge the peripheral which then can be used as needed.

When it is being charged off of a desktop computer the 3DS Powerplus takes roughly four hours to reach relatively full charge. The charge of the PowerPlus is shown by four blue LED lights on the back side which are always on when you are charging the peripheral and can be shown during normal use with the touch of a button nearby the lights.

Now onto the important part, how well does this battery life extender actually extend the battery? With a completely dead 3DS system and a full charge on the peripheral, the end result was a 3/4s charged 3DS. This charge and drain rate only took an hour of use, which means that the most optimal time to activate an attached PowerPlus is either at half battery or when the red warning light turns on. The extension will provide at least another four hours, give or take depending on your handheld settings and what you are doing, to play time if you are on a long trip or are without an area to charge your 3DS console.

Now despite this fact, I must place a small warning here. When it is in use for even a short amount of time, the charger area on Hyperkin’s 3DS PowerPlus becomes quite hot to the touch, though not unbearably so. When used for an extended period of time the rubber around it was very hot and I grew uncomfortable with leaving it on my 3DS due to the heat being produced by the charger. This means that you should not leave this peripheral on if you are going to put your 3DS in a case and carry it around or even in your pocket as the cloth. Now while the heat may not actually damage anything, it is something to watch out for for potential buyers.

Now in the end, I was able to play The Legend of Zelda: Ocarina of Time 3D on my 3DS with the 3D slider on completely and sound on maximum with a full charge on both the system itself and the battery life extender and it pulled at roughly five and a half hours. This was with everything running nearly non-stop minus the occasional break for human necessities, which shows that the 3DS PowerPlus does indeed extend the lifetime of the average 3DS battery.

But with an added bulkiness to the handheld, an inconvenient charging method and a bit of a higher price tag than other 3DS battery extensions or replacements on the market, the 3DS PowerPlus does nothing too exceptional besides being extremely easy to place on and off of your 3DS without actually removing anything from the handheld itself or installation.

I give Hyperkin’s 3DS PowerPlus