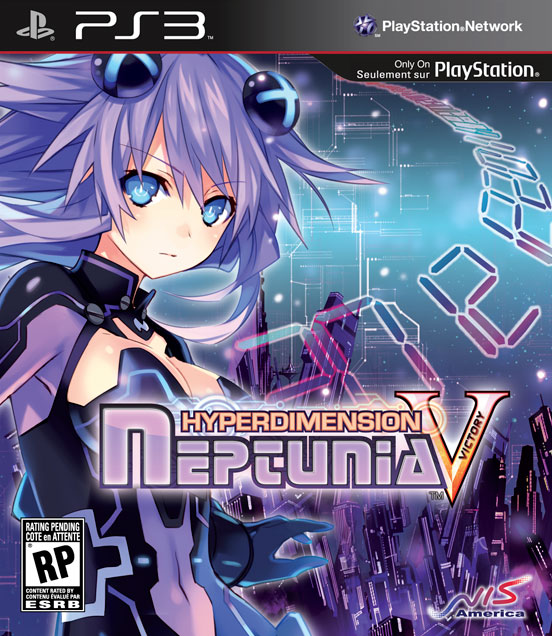 Overview:
For quite some time now there have been various franchises which have seen annual releases. These include games such as Assassin’s Creed, Call of Duty, a multitude of sports titles and more. However of these games, there is one annual franchise which comes as quite a surprise and that is the Hyperdimension Neptunia. Over the last few years Compile Heart and NIS America have managed to bring a Neptunia game to Western shores on a yearly basis and each time the series has made a unique JRPG splash full of self-aware humor, bright colors and enjoyable gameplay. With the third release in the series, Hyperdimension Neptunia Victory now out in stores, does this title still offer everything fans of the series have come to love?

Story:
While Hyperdimension Neptunia Victory may be the third game in the Neptunia series, newcomers will find that the title is surprisingly easy to follow though they will miss out on some story aspects and references if they haven’t at least played MK II. This is thanks to the fact that while the game does take place after the events of Neptunia MK II, there are no major plot points carried over from past games to develop the storyline of Victory. 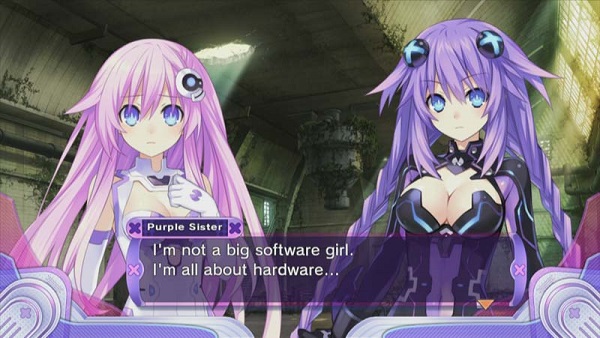 Instead, Victory joins the cast of Neptunia Mk II a few years after the events of the previous game where Neptune has been failing in her duties as a CPU by slacking off and playing games. So much so in fact that she has reverted back to level 1. When Histoire convinces both Neptune and Nepgear to continue their jobs things take an unexpected turn when Neptune and the other CPUs are sent back in time to another dimension where the world is far different from their own. In a way, this is about as cliché as a storyline can be for a JRPG however thanks to the nature of the game and its tongue-in-cheek ways, the plot works quite well.

You see, while far from a reboot, with Victory returning to the past, Idea Factory is now able to bring back a number of classic villains and introduce a number of new characters as well that wouldn’t have worked if they had tried to squeeze them into a game that was meant to be a parody of the current video game industry. As such, with Neptune stuck in the past, she must try to find a way back to her own time while also preventing the current disaster occurring in the past. 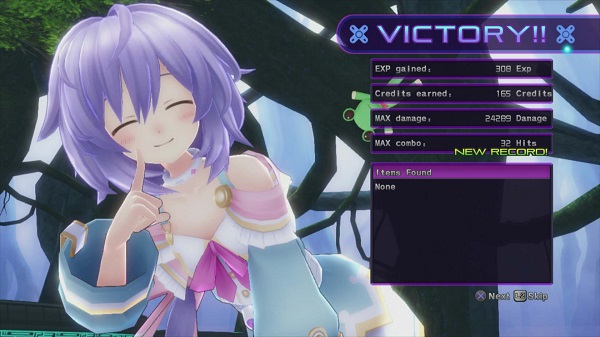 While the plot is far from original and the actual storyline for Victory can be a bit too cliché and basic, the main draw of the Hyperdimension Neptunia series has always been the characters and the humor. You see, every character in the game happens to represent a specific game company. For example, Neptunia is what a Sega console would have represented if the company hadn’t left the console market. As such when she returns to the past, she encounters a new CPU of Planeptune, Plutia, which is representative of the Sega Genesis.

Each of the girls in the game has a charming and infectious personality to them which has longtime players have grown accustomed to and considering the amount of time that Victory spends with each of them, this is a major plus for the game. Plutia especially takes the spotlight this time around, because despite being the newest character added to the ever growing Neptunia roster, her personality shift between her CPU form of Iris Heart and her normal form of Plutia are quite striking and a major highlight of the character. In a way, given the length of some of the conversations the girls have with one another, it wouldn’t be too much of a stretch to consider Hyperdimension Neptunia Victory a visual novel with RPG elements. 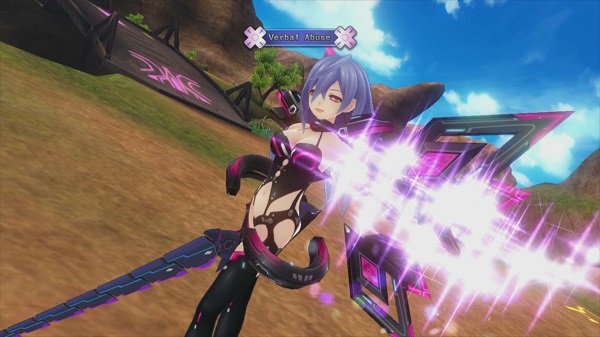 However this shouldn’t concern any longtime fans and newcomers will be pleased to find that the game’s charming characters and comedic, often self-aware, dialogue more than make up for the cliché storyline. While some of the game’s humor can be a bit hit and miss, I often found myself laughing at nearly every joke or reference made within the game and found it a hilarious experience, though a few may fall flat on those unfamiliar with some aspects of Japan’s culture or the “moe” aspects of the game.

Visuals:
If there is one thing that Victory is exploding with is color. Well… color and moe girls but most certainly color. Neptunia Victory features probably one of the most vibrant color palettes you will find in an RPG this generation and because of this, every aspect of the game is vividly portrayed, whether it is in dungeons, exploring areas or in the menus themselves. 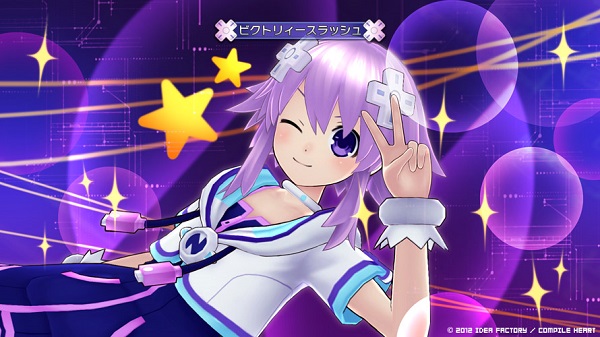 While those who first glance at Neptunia Victory’s graphics may find them a bit dated, those doing so will find themselves missing out on a fluid experience that has a surprisingly large amount of detail both in character design and combat. The characters each feature cute and unique designs and given the fact that every CPU can transform in elaborate fashion and the amount of costumes players can have their party appear in, there is a lot of customization available for those who look for it.

As far as the character portraits are concerned, they remain as animated as they were in Mk II. This means that the characters not only are highly detailed in their portraits, they also react to the in-game conversations accordingly and display various emotions. This helps make the conversations feel more natural and help provide the visual novel feel that Victory exudes.

Audio:
Fans of the series will be happy to hear that NIS America has provided both the original Japanese voice track as well as their own English dubbing of the game. The original English voice actors have been retained from past games and the new voice workers for Plutia and the other characters have done a great job fitting into the game’s tone. 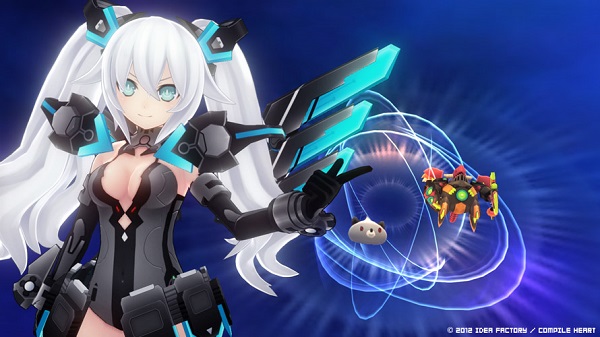 Outside of the voice track, the game features an enjoyable set of sound effects and background music that remains consistent with what was offered in past titles. Often these background songs can be rather forgetful but the battle themes are enjoyable enough given the amount of combat players will be partaking in.

Gameplay:
There is a saying in the world that often is forgotten in the video game industry and that saying is that if something isn’t broken, don’t try to fix it. That saying fits very well with Neptunia’s stellar battle system and Compile Heart has taken it to heart because Neptunia Victory’s combat mechanics remain the same as past games. Players are able to free-roam through an area and can trigger combat by either running into enemies on the field or attacking them for a pre-emptive strike. 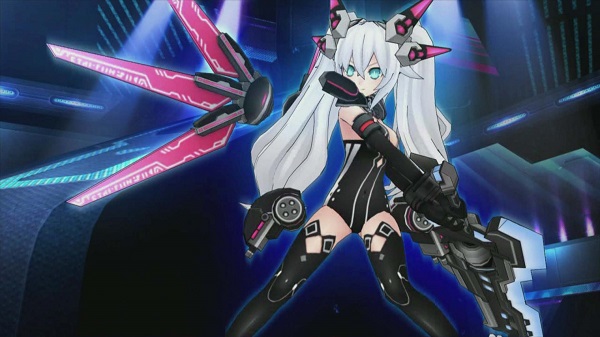 In combat, players fight in a turn based system where they are free to move around the battle field and target the enemies however they please, including targeting more than one enemy with basic attacks if they target them properly. For the most part, the battle mechanics have gone unchanged with various face buttons delivering different attacks and skills that can be used to deal extra damage or buff the party. However the combat system has seen the inclusion of an EXE drive mode that allows for powerful skills to be used after players have managed to deal enough damage to enemies to charge a gauge. These skills are certainly over the top and some aspects of the game’s combat system are still poorly explained by the in-game tutorials but it isn’t very difficult to figure out most of the game’s combat through simple trial and error.

Unfortunately, Neptunia Victory continues to support a very basic quest system that players must partake in simply to advance the game. While it is a simple enough way to progress the story, it can be very repetitive simply to take on numerous quests which involve slaying X amount of a certain monster or gathering X amount of an item. This is especially problematic near the beginning of the game where the storyline is rather slow and takes a while to get going. 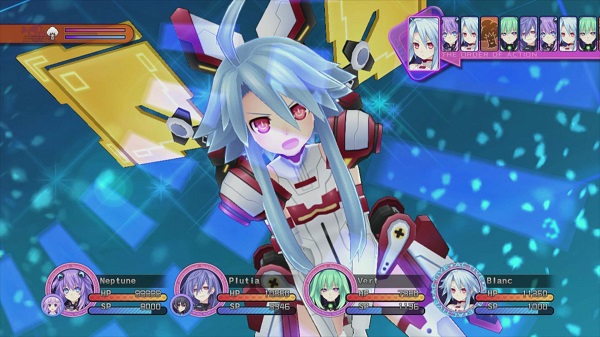 One aspect added into the game, besides the various jabs at Twitter and various video games and video game companies in the menu systems and towns, are little challenges that provide stat boosts to players for completing certain goals. These goals can be anything from simply jumping a number of times with a certain girl leading the way or winning battles without taking damage. These goals are character specific and can be very helpful when trying to build up your party and offer an extra incentive for doing well in the game and being creative.

Overall:
Hyperdimension Neptunia Victory is a rare breed in today’s video game world. The entire title oozes with charm and self-aware industry comedy but despite the great way that the game presents itself, many may simply avoid it thanks to the otaku nature of the game. However those who do so will be missing out on what is the best Neptunia game in the series. While the game’s story may take a bit to get going, it’s hilarious nature kept me in stitches throughout the game and the combat remains as entertaining as ever, leaving us with a great otaku JRPG that shouldn’t be missed.