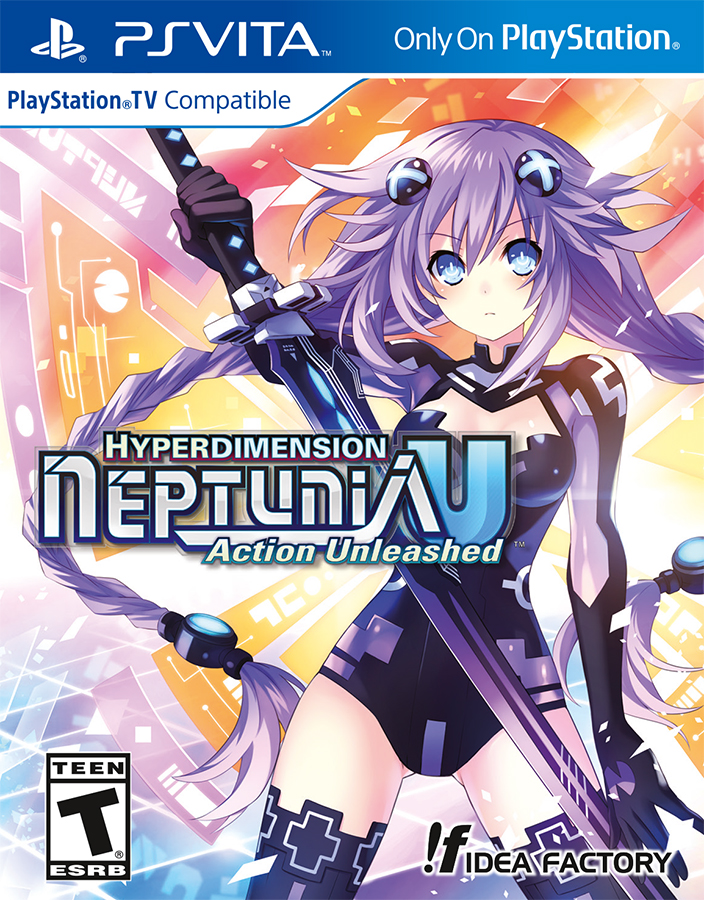 Overview
When the first game in the Hyperdimension Neptunia series was released in 2010, very few people thought that the title would launch a franchise that has seen a total of four main series games, plenty of remakes, an idol spin-off, and even a SRPG spin-off. As such it didn’t come as too much of a surprise when Idea Factory announced that the next spin-off would be an action game. What is surprising is that the title, Hyperdimension Neptunia U: Action Unleashed, would be developed by the Senran Kagura developers Tamsoft. So now that this action game takes our favorite characters and drops them into a battlefield, is Hyperdimension Neptunia U: Action Unleashed worth picking up?

Story
While Hyperdevotion Noire was a spin-off title that didn’t require players to have a whole lot of pre-existing knowledge about the Hyperdimension Neptunia series to enjoy it, Hyperdimension Neptunia U is similar to Performing Perfection in the way that potential players should have some knowledge of the game’s characters from the start of the game or they simply won’t be able to enjoy it quite as much. 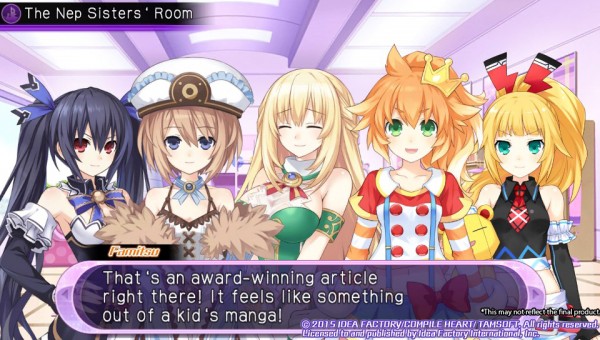 I say this because very little attention is actually given to the story in Hyperdimension Neptunia U. With the CPUs and CPU Candidates working together every difficult enemy that has risen up in Gamindustri has been defeated. With no strong enemies left to fight and the realm almost entirely at peace, the citizens of the land have grown complacent while the CPUs have simply grown bored.

In an effort to revitalize the citizens’ focus on the CPUs, two journalists, Dengekiko and Famitsu (who are clearly pointed out as characters based off of popular Japanese magazines) are tasked with coming up with articles about the CPUs and CPU Candidates. When approached by these two, the girls agree that they wouldn’t mind taking on a few quests here and there to have some nice things written about them. 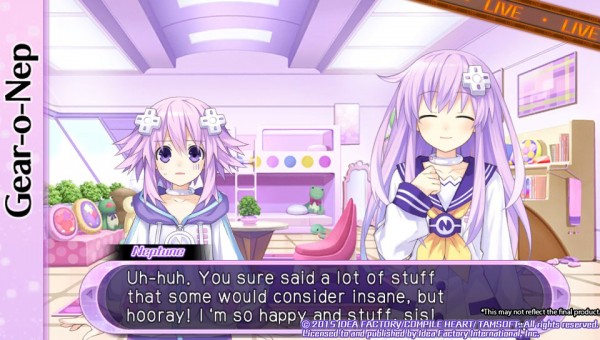 That is more or less the entire set-up that Hyperdimension Neptunia U is given. From this point on players are given a large number of quests that can be completed in any order with certain quests resulting in the characters talking with one another after completion or commenting about events that may have happened in a fight. This means that the core of the story is fairly flimsy this time around and as mentioned before, newcomers will be receiving no backstory and very few details about the characters and the world. 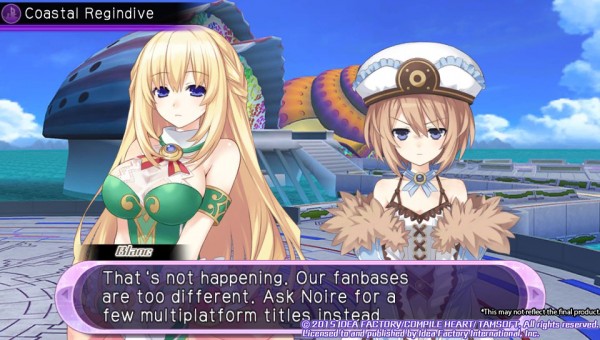 Despite being lackluster, the characters still serve as the strongest aspect of Hyperdimension Neptunia U’s story and humor. Throughout the game the characters will break the fourth wall by commenting on the various aspects of the game, such as mocking that the destroyed clothing must be this game’s unique selling point and that they’ll power through it, or when Blanc tries to act out of character in an effort to make herself stand out a little more. These moments do come few and far between but fans of the series will certainly appreciate seeing their favorite characters in new scenes.

Gameplay
Almost all of the time players spend with Hyperdimension Neptunia U will be on the battlefield as there is very little to do other than take on quests and battle against enemies. When players aren’t fighting they can access extra scenes for their favorite characters, use basic customization to change the outfit colors of the girls or equip various weapons that can be unlocked with coins earned by defeating a certain amount of the same type of enemy. 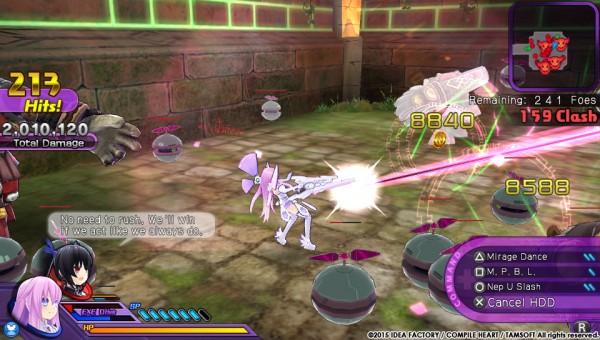 Once players do step onto the battlefield they’ll find a very solid title. Almost every character has a completely different move-set (with Ram and Rom being the only extremely similar characters though those familiar with the series should know why) featuring a mix of light attacks and heavy attacks to create various attack strings as well as skills taken from past games that have been reworked to work into an action game such as this.

Players must make use of skills sparingly as they work off a slowly recharging meter that can be refilled quicker by picking up dropped healing items from defeated enemies. A separate meter is used to let players know how close they are to being able to transform into their CPU forms where even Dengekiko and Famitsu obtain new stronger abilities and new basic attacks for a limited amount of time. This meter recharges over time though since players bring two girls into battle, the resting character generally fills their CPU meter faster allowing for quick transitioning or the use of a last ditch skill if used in a pinch. 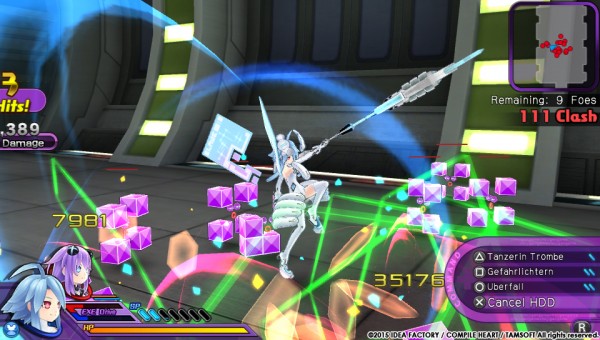 Those familiar with Tamsoft’s Shinovi Versus will find the combat system extremely similar to that with elements of the Warriors’ series mixed in. Players will enter a stage where they will be tasked with either defeating a certain amount of enemies, taking down a boss, or completing a certain unknown goal that players will have to figure out to complete the mission. There unfortunately isn’t a whole lot of variety to be found in the missions players take on and even though the levels are nicely varied, most of them take place in a single room with very little exploration. 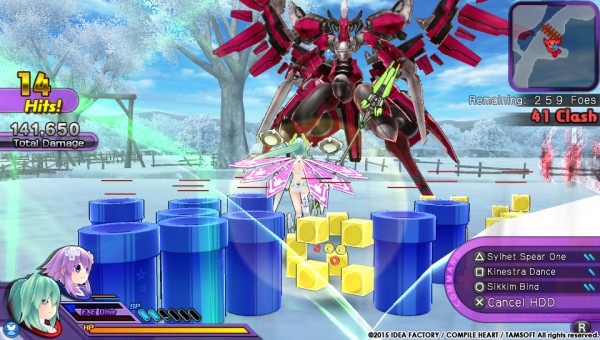 It also doesn’t help that the enemy AI is almost always limited to being rather idiotic. Unless the player is facing off against a boss enemy, standard foes will generally stand still and make the rare attack that can easily be interrupted and even on the higher level missions players will only be punished by attacks that deal large amounts of damage instead of intelligent AI to face off against. Despite these limitations Hyperdimension Neptunia U is a great title to play for a few missions at a time and there are even a few extra modes available once the player manages to complete the game.

Visuals & Audio
Hyperdimension Neptunia U: Action Unleashed works quite well on the Vita as not only does the title look great, featuring nicely detailed character models that look just as impressive as they do in the games but almost no slowdown whatsoever, even when the player utilizes their strongest, and therefore flashiest, abilities. As mentioned earlier the levels are a bit small at times but nicely varied as players will be fighting in a variety of stages against a number of enemies commonly found in the RPGs. There is even a nice little touch of fan-service in the game since, as the girls take damage or utilize too many strong attacks in battle, their clothes will become torn. If that isn’t to your liking however, it is possible to unlock clothing that cannot be broken, though on the other side of things there is also clothing made to rip with little effort. 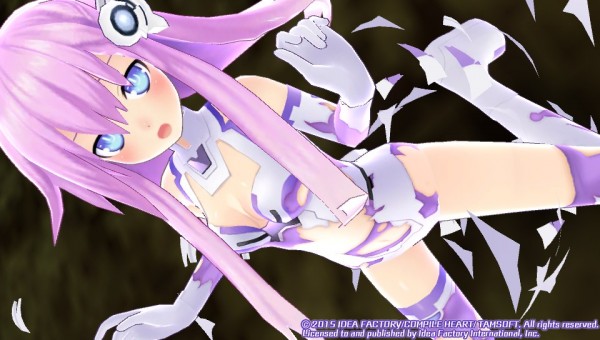 Those who wish to enjoy either the original Japanese voice track or the returning English voice cast will be able to choose as freely as they wish as switching between the dubs is quite easy while the actual performances are what fans have come to expect from the respective voice actresses. The soundtrack is familiar and charming and I must say that the team put in a nice touch of giving each fighter their own unique piece of background music that automatically begins playing when they transform.

Overall
Hyperdimension Neptunia U: Action Unleashed is a far different title than fans of the series are used to but this step outside the box is a welcome change that features enjoyable fast paced combat featuring everyone’s favorite characters. While the storyline may be a bit iffy and there is little variety in the missions, there is plenty of fun to be had with this game, especially if you happen to be a fan of what Tamsoft has done in the past and Hyperdimension Neptunia.