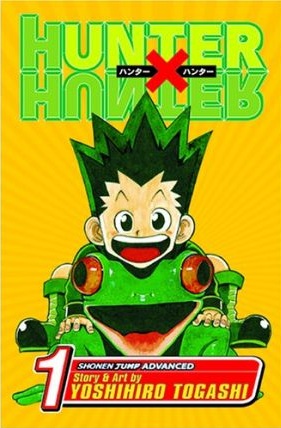 Overview:
I recently decided to check out Togashi’s work, after having heard people sing his praises for several years. I knew of him as the man behind Yu Yu Hakusho, a series I recall from my younger years. I liked Yu Yu Hakusho, a fair bit, but it never drew me to Togashi’s other works. Until recently when after a chance error on my part when I mistakenly purchased Hunter x Hunter volume 1 instead of Dragonball volume 13 from the Book Depository. Don’t ask me how I did that, it just happened.

So without realizing I had bought Hunter x Hunter I waited patiently for my Dragonball volume 13 to arrive. The day arrived and I opened my package to confusion. After checking their site I realized I actually had purchased it. I could have returned it but I instead decided to read it. It was a decision I am thankful I made, because what I discovered was not only a hidden treasure but a true manga classic. 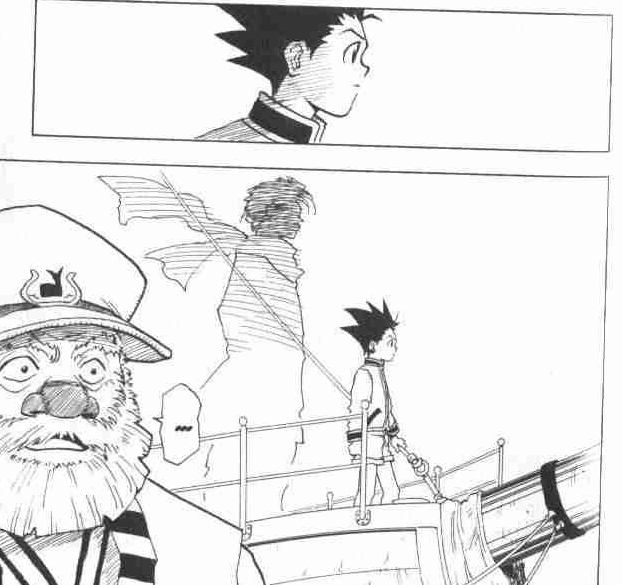 Story:
We are introduced to a young boy named Gon fishing whilst camouflaged as he reels a giant river monster. He returns home to his Aunt and asks her to keep her promise in allowing him to take the Hunter Examination to become a Hunter. She reluctantly agrees and he sets off for the Exam. Through a series of flashbacks it’s revealed that his father is a legendary Hunter named Ging, who hasn’t died as his Aunt had told him, but instead ran off to live his dream as a Hunter. The interesting thing about this is that it isn’t played off as a story of father abandonment but more as a story of a life so great you would abandon your child for it. It feels refreshing and deservedly so, the father abandonment story has been done to death and when this didn’t turn out as I planned I was pleasantly surprised.

Over the course of the volume  it mainly details Gon’s journey to find the examination hall, which is unbelievably difficult to find, so difficult in fact that finding it is part of the exam itself. The road to the examination hall is riddled with deadly traps and deadly creatures as well as murderous examinees trying to kill off as many weaker examinees as they can.  It provides a ominous sense of dread and leaves a darkness hanging over the characters heads as danger is ever present. But it doesn’t effect the light-hearted vibe of the series, in fact it is a complete juxtaposition. However Togashi masterfully melts both together for what makes a great mood for the volume.

Characters:
This is a manga that develops it’s characters extremely well, let me say that first. But the way it does so is very subtle, for common readers they may find themselves knowing and understanding the characters without knowing their true motivations, which is quite a feat for Togashi. What he has done is rare for manga and even anime, where-in the characters say little regarding their past or motivations, but their actions tell you who they are.

Take for example Leorio, on the surface all he cares about is money, yet he has a strong sense of chivalry and honor despite his surface appearance and constant claims that he wants nothing but money. Yet he is so often called to action and steps up no questions asked and slowly along the way we gain a hint of his motivations and the final understated revelation of his motive albeit not entirely revealed. Their had been hints of his knowledge of medical care along the way such as when he treats the Navigator with first aid and when he is seen reading a magazine called “Meds”.

It is these little touches of detail that give life to these characters. Each character has development much like this, some even at the end of the volume have yet to have motivations revealed, yet we are finding ourselves caring deeply for these characters. It is a testament to the genius of Yoshihiro Togashi, a genius that deserves greater acclaim.

Artwork:
The artwork is simple and easy to understand, that’s not to say its void of detail. The level of detail rivals that of One Piece. I found myself noticing little things in the background, that show the amount of love and care Togashi has put into this work. If you have followed the series through Japan you would undoubtedly know about his common hiatuses, to think that even though he has suffered illness after illness and been brought away from the series he hasn’t given up and kept the finished products artwork in tact is amazing. I know that some chapters published in Weekly Jump were sub-par but the finished volumes are improved.

The artwork overall is just spectacular and really gives life to the world of the Hunters and the characters within it.

Overall:
This is an excellent first volume for a series I can not wait to blast through, if you have ever considered reading any of Togashi’s work but did not know where to begin I wouldn’t be far stretched to say Hunter x Hunter is a better place to start then Yu Yu Hakusho (a series that is over 20 years old now). I particularly recommend it to fans of One Piece and even fans of Naruto. Although Naruto owes a large debt to Hunter x Hunter, with taking many of the same elements from it.

If you are looking for a new manga series or somewhere to begin in Togashi’s expansive library of works, this is for you. I highly recommend it. It is a near perfect volume of shounen action manga.

I give Hunter x Hunter volume 1: