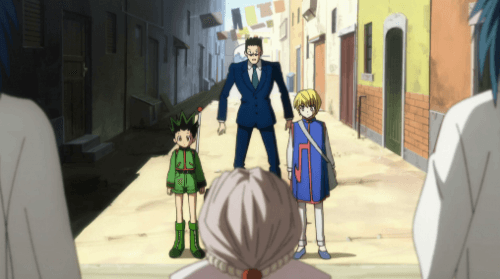 The Hunter Exam continues with the second episode of Hunter x Hunter and boy does it ever pack a punch. This episode adapts another 2 chapters of the manga into animation in what is an incredibly tightly paced and cohesive unit that will hit you hard.

While the first episode introduced us to the world of the Hunters, as well as our 3 heroes; Gon, Kurapika and Leorio – Episode 2 kicks the story into gear whilst providing some interesting character development.

We begin were we left off at episode 1 with Gon and friends passing the Captain’s test. The Captain give’s Gon a clue of where to head for, which happens to be a huge tree sitting atop a hill. After a little scuffle about whether or not to trust the Captain’s advice, they eventually decide to do so.

They arrive at a proverbial ghost town, which is absolutely atmospheric. Suddenly an old hag appears and poses our heroes a question, which seems to have no correct answer. The question being “Who would you save if you could only save one, you mother or your lover?” Clearly there is no right answer, hence the correct answer is no answer. It is both a clever moment, that stands out from usual shonen series as it actually places the characters in a position in which they are required to actually think. It is a battle of the mind, not of the fists.

The reason I love this part, is that after it’s all said and done, Gon provides another incredibly insightful point “What if we really had to choose? Maybe some day I will.” That line right there gives me the feeling that it may be a foreshadowing for a future scenario that not even has occured in the manga yet. Who Gon would choose between? I do not know. 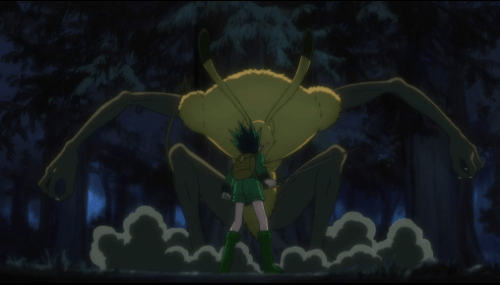 The pace picks up even faster in it’s second half with the introduction of magical beasts with the Kiriko monsters. I am amazed how much development they managed to fit into that portion. Gon, Kurapika and Leorio each had a moment that pushed their characters forward. I particularly enjoyed that Leorio shows signs of his medical skills here. It foreshadows something we will discover in the next episode.

The episode ends in a spectacular way, with the Kiriko literally flying Gon and friends through the sky to their destination. It was a great way to close out the episode.

I loved the pacing of this episode, there was a lot of fat cut, which made this such a tight episode that never took a second too dawdle. It was simply full-throttle plotting, that should hush a lot of the naysayers about this new readaptation of the series.

For those who were saying the characters didn’t gel as well as they did in the previous series, this episode should have changed your mind. They interactions between each character were completely genuine and held true to their personalities in the manga. I loved seeing Leorio flipping out at the old hag’s question, with Kurapika trying to calm his rage. It was classic Leorio-Kurapika. 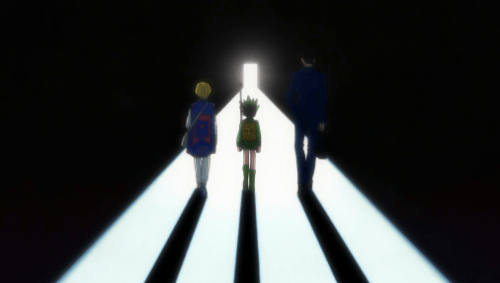 The animation for this episode was incredibly impressive, especially the chase with the Kiriko. The action on display here was a great sign of things to come. I also think it’s worth mentioning that the Kiriko that Leorio heals, was actually pretty bloody, so I don’t think there will be too much censorship on this series.

Their was also some new background tracks that really stood out to me. The track that played during the intense Kiriko skirmish stands out to me a lot. Also the opening and ending have really grown on me now, I liked them last week but loved them this week.

Hunter x Hunter is looking to be one of the best new shonen series this year. You know what, it is probably the best in years. I loved this episode and expect to love each and every episode following it. This is definitely a series that should not be missed.