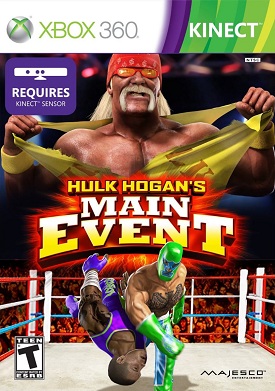 When the Kinect was first created, everyone thought that it could be an amazing experience. With your whole body becoming the controller, it was easy to imagine all of the possibly that would literally be at arm’s length. One of the biggest experiences one could ask for is a virtual fighting game, especially one that involved everyone’s favorite sport’s entertainment… wrestling. Majesco and Panic Button have teamed up and brought us a wrestling game that carries one of the biggest names of all of wrestling, the Hulkster himself, Hulk Hogan. Now whatcha ya gonna do brother, when Hulkamania run wild on you!?

Apparently, not a whole lot. The only actual piece of story here is where the player is able to take a wrestler of their very own, which needs to be created via Create A Wrestler and raise him from the backyard league to the big time. Now this means you don’t get to play as Hulk Hogan, but he does show up from time to time. Apparently Hulk Hogan is running some sort of contest where he chooses you to train to become a main event wrestler, unfortunately an evil corporate man by the name Booker (not Booker T) who runs the corporation you are wrestling for has other plans in mind. 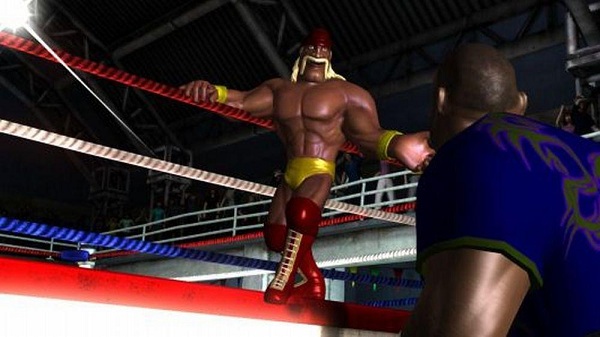 Unfortunately the story is just so poorly presented and done that it just reeks of superfluity. The player will advance through various matches, often making their way up to the next venue after competing a couple of times in each area. The matches are played out in a very simple format and while the first few fights are somewhat interesting because they introduce new “Stunts” to perform, but afterward simply become tedious as they follow the same standard formula.

Any storyline progression is shown through comic book visuals… literally. Speech bubbles appear to tell you what characters are saying, which is usually something entirely predictable and occasionally out of place. As you advance you at least unlock additional quick game modes and special gear, though nearly everything, if not everything, is unlocked one time through the career which is certainly a thankful thing considering how dreadful it is.

The career mode itself can last around three hours tops, and that is with failing a few times here and there and having to retry a certain Stunt. More often than not players may find themselves taking a break simply to avoid the repetitiveness of it all.

As you can see from the screenshots throughout this review, the visuals you see in the game are very strange. They have a certain theme about themselves, but unfortunately this theme is just terrible in motion. The crowd you are wrestling in front of look absolutely terrible, like something one would expect from a last-gen title and appear to be something like a claymation character. The wrestling rings themselves are decently varied at least which makes it nice and refreshing whenever you have the opportunity. 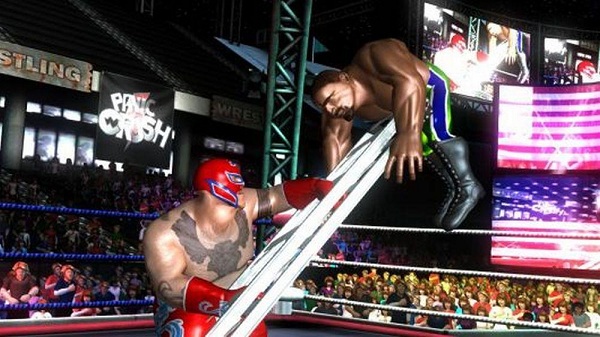 Unfortunately the wrestlers themselves have the texture of plastic action figures. Not even the new action figures you see in stores nowadays for children, but the type that we used to see around ten or fifteen years ago. Thankfully there is a decent amount of variety available in the Create A Wrestler option, though the fact that the only hairstyles are bald and head nearly shaved bald, it goes to show that the title has difficulty even rendering long hair, let alone anything that doesn’t cling to the wrestler’s body like it’s part of their plastic skin.

There is some rather generic music used for the game, with a few interesting pieces of music that slowly grow to be annoying as they are repeated ad nauseum. To make things even worse, the song at the end of the game, which sounds similar to “Real American” the song that was Hulk Hogan’s entrance music while he was wrestling with WWF but unfortunately it is simply a rip off version.

Hulk Hogan himself usually throws out random catchphrases, most of the time they match the action going on in the ring but sometimes they simply do not fit what is going on. Still it is nice to at least hear Hulk call people a brother again, too bad the number of his phrases is so small that you’ll often hear the same thing over and over again.

There is a rather unique option in the Create A Wrestler mode, and it is the Voice one. It allows the player to record their own voice in response to a couple of interview text questions. This is interesting in theory, but it is poorly implemented as the player’s voice recordings are then played over and over again every time they go through an Entrance segment, so make sure that you don’t record anything annoying.

Now pretty much everything up until this point has been pretty bad, but how does Hulk Hogan’s Main Event handle it’s gameplay? Players will not actually be performing wrestling moves themselves, but rather performing specific actions that are shown in the corner via Hulk Hogan cue cards. Players then complete a certain “stunt” in a series of “stunts” to finish a match off, or just play a simple one in Quick Play. 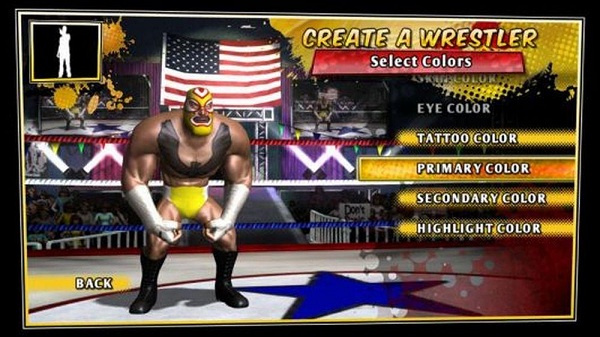 Now each full match you perform in the Career Mode for Hulk Hogan’s Main Event follows a rather standard system that involves the character performing an Entrance mode. The Entrance Stunt features the player performing certain motions that show up in the corner and the faster you perform these the more points you receive. Now entrances are something we’ve always seen in wrestling, but I believe that even The Undertaker makes quicker entrances than this game allows.

The player will have to perform at least four or five poses as they make their way down the ramp, but these are interrupted by fans of your opponent throwing trash at your wrestler. Yes… trash. I’m not entirely sure what wrestling league would even allow this to happen, especially four times in one entrance but the player must then dodge the trash or lose points as they get hit by them. Though you get extra laughs from watching the wrestler get nailed with multiple glass bottles and his plastic skin not showing a single flaw.

From there you perform a number of stunts that will involve you fighting your opponent in a variety of ways. There are modes where you will be able to throw and block punches, whip them into the ropes and clothesline them and even chair battles. These are usually varied enough from match to match so they help break up the monotony a little bit.

Unfortunately, since Hulk Hogan’s Main Event is indeed a Kinect game, you must do all of these cue cards with your body. The reason I say it is unfortunate is the fact that the game has very dodgy motion recognition. There are a lot of times that the system will work just fine, for example the Bodyslam Stunt will usually go off without a hitch, though blocking attacks in Trading Blows is usually just complete luck due to the fact that the sensor often doesn’t pick up blocks properly, let alone some attacks. 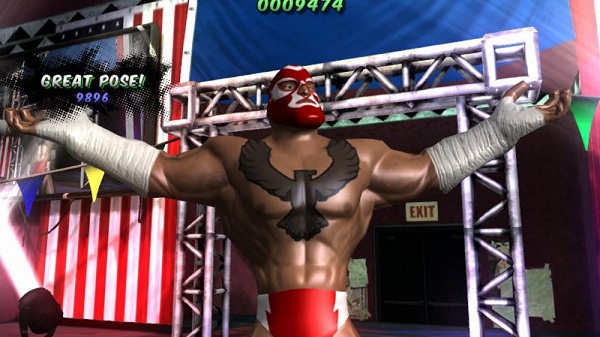 To make matters worse, there seems to be absolutely no flow to the matches. You will beat your opponent down, then suddenly they will be just fine and able to get a chair, or Irish Whip you without a care in the world. Sure this happens in real wrestling all the time where wrestlers simply don’t sell their damage properly, but it is always the case here. Plus, every fight ends in a pinning stunt where you have to perform a number of motions to stomp your enemy into the ground, then finally pin them. Though I’d love to know where the referee is considering with all of the leaning side to side you have to do to deplete the guys stamina, the count should be up to 15 by the end.

Now this would all be forgiven if it wasn’t for the fact that the game itself can be completely broken at times. There are a few opponents who have their stamina and health regenerate so quickly that you will need to literally perform move after move after move, occasionally never beating them simply due to the fact that their health will never diminish lower despite following what the little Hulk Hogan Cue Cards.

Now Hulk Hogan’s Main Event really tries to be a good game, and there are a few stunts that work well enough with the Kinect, but these are few and far between from the constant repetitiveness of the actual game as a whole. The Create a Character at least provides a decent amount of customization, but the characters themselves look so below standard that the graphics are just not what you should see today, even on a Kinect title.

It would have at least helped to see Hulk Hogan more, but his scant appearances make it strange to even have the title named after him, if not a simple cash-in. Unfortunately Hulk Hogan’s Main Event fails to make any impact, besides show how not to make a Kinect title.

I give Hulk Hogan’s Main Event