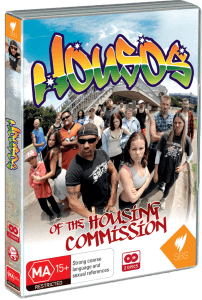 We’ve fallen on harsh economic times, and governments worldwide really need to man up before we all end up like a bunch of bloody Housos! Housos is the latest project from Paul Fenech, mastermind behind Aussie hit SBS TV stoner-comedy shows such as Fat Pizza and Swift & Shift. Like Fenech, I too am a Maltese/Australian citizen, and while I personally haven’t grown up in housing commission, I’ve been brought up pretty close by to a lot of um…economically-challanged areas so I can personally relate a lot to this show. Hell, it’s filmed only a few towns over from where I live! That being said however, anyone who is aware of Fenech’s previous works should know what they’re in for: adolescent sex, drugs and violence jokes of very poor taste, most of which we’ve already seen in Fat Pizza. But with a new unique setting and a whole bunch of new characters, does Housos have enough to pull the weight along and make it a series worth watching? Let’s find out! 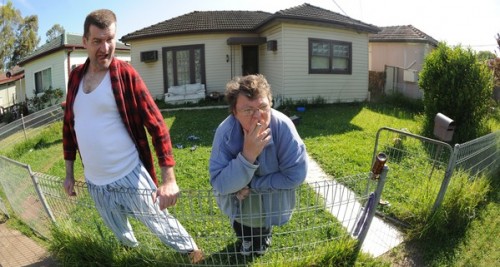 Housos documents the tales of a town called Sunnyvale, more specifically it’s small housing commission zone who’s residents are known as the Housos. The Housos are all a bunch of slackers who are willing to work very hard to well…not work by any means necessary! This means all these immoral alcoholic junkie slackers must find new and inventive ways to pay for their thrills, and that usually comes down to theft, but being uneducated often means they’ll screw up a lot resulting in hilarious failures. 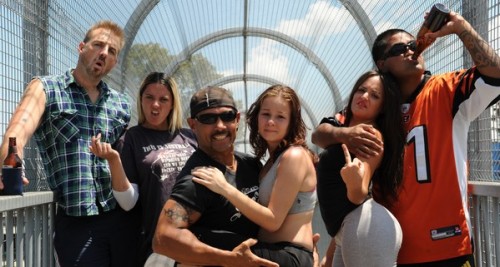 Housos doesn’t really follow a set storyline, but rather focuses of individual tales of Franky (Paul Fenech), his barely legal girlfriend Kylie (Kiri Schmitt) and their houso friends. The structure of the show is strictly comedy, meaning that all ideas such as character development and emotional depth is buggered off completely in exchange for stories that glorify crime in a comedic manner. The problem with having a cast that are scumbags that never show signs of remorse or consequence for their actions, or any signs of growth in character results in little-to-no care for them. The fact that the show contains some terrible actors doesn’t help the characters either. Most purposely exaggerate a fake bogan Australian accent, and while it can be funny to laugh at it isn’t ever convincing. Also some characters such as Shazza (Elle Dave) scream every line they ever speak. Talk about over-acting! 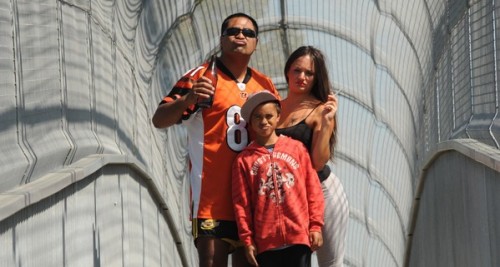 A huge problem with the show is that it heavily relies on shock-comedy hoping to surprise us, but often fails as it is constantly repeating the same ideas. For example, in almost every episode either a police car or fire truck is stolen and taken for a joy ride and is tried to be passed off as a joke. What the writers don’t seem to notice however, is that the funniest moments of the series is when it relies on observational humour or placing the housos in situations outside their comfort zone such as being around rich government officials or at a foreign holiday resort. Instead, they focus on trying to shock us with jokes about sex and drugs, or by ‘chucking a Dane Cook’ by simply screaming. Here’s a tip to all comedies out there: just because your yelling, doesn’t mean your being funny! That being said, there are funny moments throughout the series, but while your sometimes laughing with the show, sometimes you’ll also just be laughing at the show’s horrible acting, accents and just how much stupid crap they get away with. 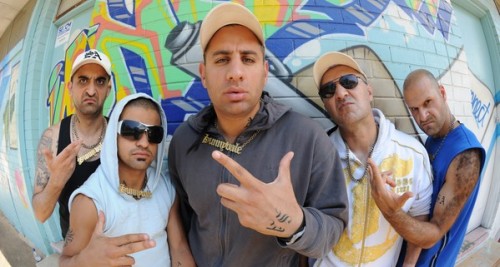 There are some really bright moments however, and these are often due to a few good characters that bring different types of humour and jokes into the show preventing it from becoming too repetitive or stale. Examples include a lebanese gang known as the ‘Sunnyvale Assassins’ who steal the spotlight in every scene they appear in, and Kev (Kevin Taumata) who seems to be the only person in Sunnyvale with a positive outlook on life. It’s characters like these (among a few select others) that give the viewer a break from the constant yelling throughout the show as well as keep the repetitive plot interesting. The main issue however is that the show works best when Housos such as Frankie, Kylie, Dazza and Shazza are shown in ‘normal’ society to point out their behaviour through contrast, but this doesn’t happen very often. Instead, the show is forced to rely on placing these characters with little depth and no development in comedic situations, but these situations are often similar if not the same so there isn’t much to keep it going. So while the show is pretty entertaining at first, it all gets very old very quickly. 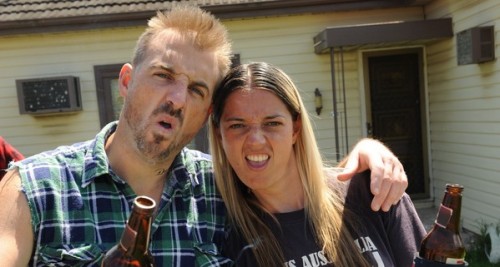 Aside from the constant barrage of screaming and overuse of profanity, Houso’s contains a relatively enjoyable soundtrack. Focusing on a Australian rock and hip hop songs throught the series, the chaotic nature of the selected songs often reflect the mood of each scene really well as well as staying true to the Australian roots of the show. Furthermore, the show’s theme song is really catchy and makes for a great introduction to each episode. Visually speaking on the other hand, Houso’s is clearly on a very low budget. The camera quality is certainly of not a very high standard, although it isn’t terrible. The sets on the other hand have been put together well, creating a very authentic look for the series and making a very believable town for these stories to be told in.

Housos contains a whole bunch of special features that are actually really entertaining to watch. There’s a whole range of deleted scenes and out-takes that show off a lot of what appears to be improvisation, a tour of the town the show is filmed in and comparing the actors to citizens of the town, and my personal favourite; a guest star appearance from the internet sensation Trent from Punchbowl! As a fan of Trent’s previous work, I was filled with excitement to see him alongside the Housos cast, even if it was for just a few minutes. It’s a shame he wasn’t in any more episodes, as again like the ‘Sunnyvale Assassins’ and Kev, he brings a different style of humour to the show. All in all these extras make a pretty interesting watch and if you enjoy the show you’ll love these as well. Oh yeah and there’s also a credits section in the extras. Awesome! 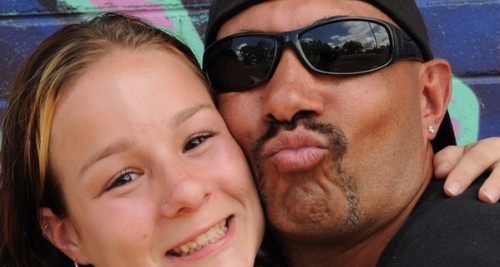 Housos, like many of Fenech’s previous efforts relies heavily on shock comedy aiming to be ‘edgy’ and ‘controversial’ but instead falls into simply bad taste. Keep in mind however, this isn’t a show your meant to take seriously, as the show is aiming to be the opposite of classy by using it’s low-income setting as an excuse for immature jokes based on sex, drugs and violence. But there’s something about Housos that can bring out that adolescent boy inside of you and make you just want to see more. The entire show is like a cigarette: you know it’s bad, but you just don’t give a damn because it’s just a bit of fun. And in the end isn’t that what entertainment is meant to do-be fun?