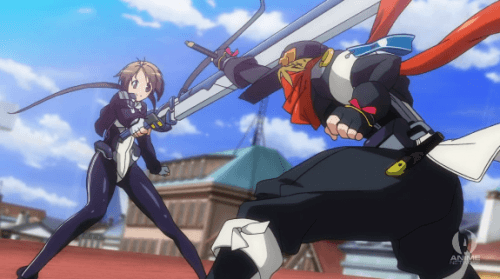 It is not often that a series comes along that leaves you completely awestruck after watching it. Horizon on the Middle of Nowhere left me awestruck, but not because I was amazed by how good it was, more because I was shocked by how utterly chaotic and bi-polar the whole thing was. In order to properly explain my sheer confusion about everything that happened in this 22 minutes of anime, I need to trace back to the way it all began.

The episode starts with a mysterious woman singing a haunting song, with what are surely foreboding lyrics whilst gazing at a tombstone in some fancy futuristic graveyard. We pan up to a smarmy looking pretty boy with a smug look on his face. We then go to the opening theme (which I will get to later). Following that we are presented with some interesting shots of the world of the series giving us an idea that this is somewhere in the future, then suddenly we are hit with about 15 characters who are apparently going to be the focus of the episode. 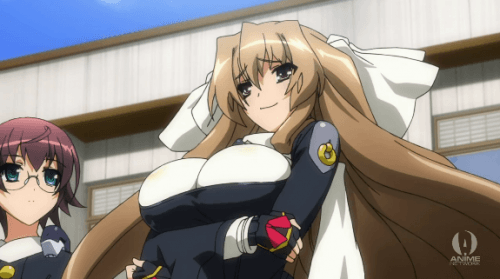 It turns out it a class from some kind of magic school. Half of the class is buxom fan-service girls (one of whom’s breasts can not stay still) and the other half ninjas or some bizaare creature. Their teacher (another fan-service character) then tasks them with chasing her about town in order to lay one hit on her. Next thing you know there is an elaborate an elaborate chase scene with the class destroying a large portion of the town, apparently not bothering people too much.

The episode literally ends there. Well at least you’d think so. Suddenly some intense monologue revealing the incredibly unnecessarily complex history of the world in this series. From what I gather, humans went away from Earth, came back and realised the world wasn’t inhabitable anymore, decided to live on-top of giant air-crafts in the sky and start history all over again. But I am probably wrong… To me it was just complete nonsense thrown in at the end for some reason. 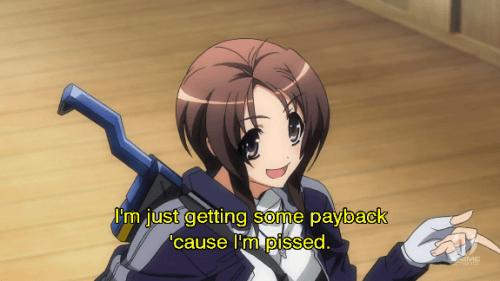 Now while this may seem like a random collection of events, which it is, I have to say I did kind of enjoy the nonsensical chaos of Horizon. There is something about the way this series plays with it’s obvious nonsense. It is clearly aware, but wears it with pride. That is why I couldn’t bring myself to not enjoy this anime. After watching all 22 minutes of the first episode, I was at the very least interested to watch it again.

I mean any show that can have some unnecessarily complex world history, unidentifiable main character, fan-service girls aplenty as well as random monsters and ninjas in some kind of horribly good mash-up deserves at least a few viewings.

There were some other things I enjoyed about the first episode, particularly the portayal of the Teacher character. Of all the random character’s thrown together here she stood out as the most interesting, not to mention her voice actress was on absolute fire here, eating up those lines like they were going to go cold. I have to give her credit where credit is due, she atleast had fun with this series, even though she probably knew how ridiculous it is. 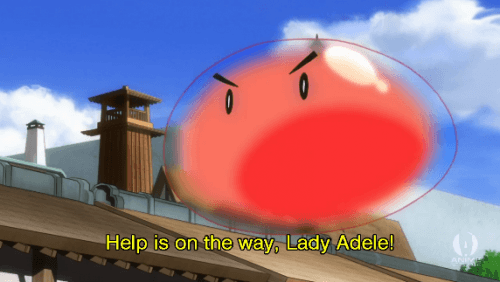 Another thing I liked was the series soundtrack. The opening theme was relatively catchy and featured a nice little video along-side it. I won’t say it suited the series perfectly, but it was wildly out of place, like everything else on display here so in a way it kind of does fit. That isn’t the only music I thought was good here, the entire episodes background music was like it was on drugs. It would just rapidly change from one genre to another with little sense of rhythm or flow, but it worked with the craziness of everything.

Not surprisingly the animation and art were great here as well, as you’d expect from Sunrise. The most visually impressive scene was the huge chase scene with the Teacher, which featured some very fluid attacks that looked stunning. The art style of the series is quite unique but gave me a Code Geass vibe, but that may just be my subconscious thinking about Sunrise animating this.

In the end, Horizon on the Middle of Nowhere’s first episode was a collection of nothing but random ideas, characters and settings thrown together, because they can. It is simply a wildly energetic anime that seems to have no idea what it wants to be or even if it wants to be anything other than pure nonsense. I guess we will find out over the horizon.