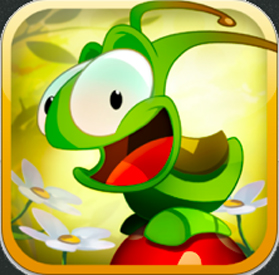 The iOS App Store is filled with endless runner games. Most of them stick to the same kind of formula, piggybacking off the success of Temple Run or Subway Surfers. Hoppetee stays clear of those sorts of games, but one can’t help but draw comparisons to Tiny Wings. You hold the screen to descend and speed up, and you let go to launch yourself into the air, timing your movements so that you can avoid traps and make it as far as you can. The game is not lacking in charm or cuteness, but it lacks a certain polish and is missing that ‘something’ that will keep drawing players back. 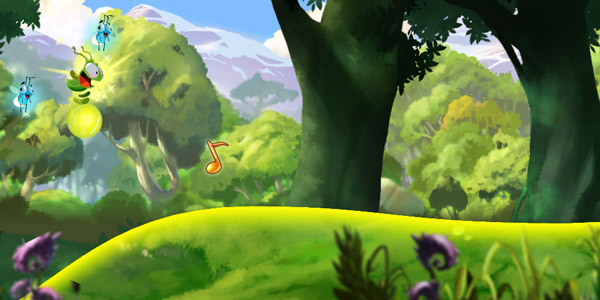 Hoppetee follows the exploits of a newly born grasshopper who cannot jump very high. As he can’t jump very high, he has trouble moving anywhere at a decent pace. As he is feeling lost and unsure of himself, Hoppetee discovers a bouncy-ball, and once he gets on it, he  realises that it can use it to roll across the country-side at great speed, or by bouncing as hard as he could, the ball will launch him into the air. Our young Hoppetee is filled with glee and excitement and off he begins on his journey across the world. The game’s narrative feels like it would fit at home in a children’s book and is told through a short, cutely-drawn cutscene at the beginning of the game. 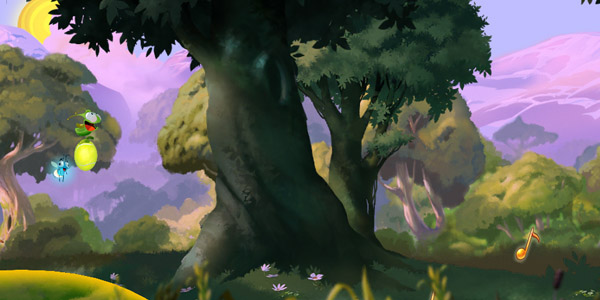 A lot of parallels can be drawn between Hoppetee and the much-loved Tiny Wings game from a few years back. The game plays by holding your finger on the screen, which causes t Hoppetee and his little ball to build up speed. Letting go of the screen launches you into the air. The trick is to time when you are holding and letting go of the screen to jump over obstacles such as; tall grass, reeds, bodies of water and hills, while gaining momentum on the down-hill slopes. The gameplay is simplistic and easy to grasp, but just feels a little sluggish and unresponsive. At times it seems like despite doing everything right, you will have slowed down to a snail’s crawl. Once you hit a snail’s pace it can also take some time to get your momentum and speed back up which is problematic, especially as you get to night time.

The game has a day/night cycle that directly affects the gameplay. During the day you are free to go about the game at your own speed, but once the sun sets you are forced to move as fast as you can, picking up the game’s collectables to keep you running as far as you can until either you reach the next day, or your firefly light burns out, ending your run. 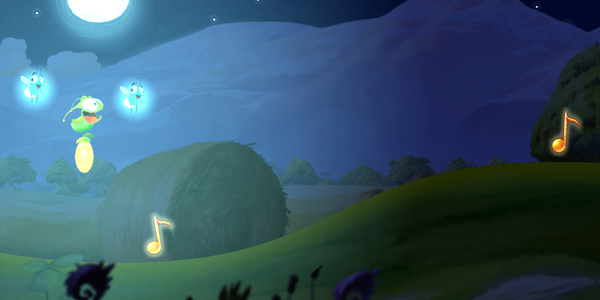 You pick up fireflies during both the day and the night and can hold up to three at a time. Once the sun sets, the fireflies start to slowly burn out and if you are caught with no more light before the sun rises again, you either have to give up the run, or fork out 300 Notes to keep going.

Notes are the other collectable available in Hoppetee. Notes fill three purposes; firstly is the aforementioned ‘continue’ that can be bought should you run out of fireflies during the night. The more prominent uses of notes however are as currency and to trigger the game’s Frenzy Mode. Frenzy mode happens when you collect enough notes in succession, and causes you to run faster and jump higher. Collecting more notes while in Frenzy Mode will extend its duration. The Notes can also be used to purchase in-game power-ups between runs. These power-ups will have you running faster, or jumping higher and collecting more notes in your following game. Unlike most endless-runners, the Notes only real purpose is to buy you things that will get you more notes. There are no permanent power-ups available, and the circular system of collecting notes so that you can collect more notes just ends up feeling shallow. 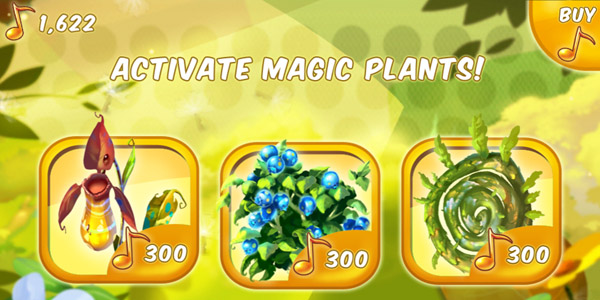 The game uses a really nice colour pallet – with a lot of greens and yellows that really reflect the game’s world. Hoppetee himself stands out, and has this huge infectious smile that just has you smiling along with him as you can see how damn happy he is to be riding along on that little ball.

The backgrounds are probably the most detailed part of the set, and all look great. They change through the course of the game so you aren’t looking at the same backdrop over and over again. The foreground has less charm to it, and the problem is that a lot of the detail that is in the foreground will go completely unnoticed to many players. For example, I didn’t notice that the foreground had mushrooms in it until I was specifically looking for visual things in the foreground to talk about. 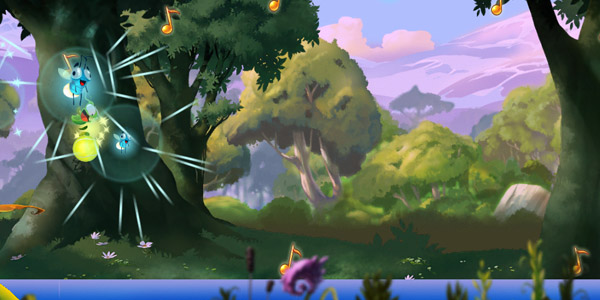 You know how the sound of a child at play can be the most humbling and sweet sound in the world? Well you also know how after about 5 minutes it can become the most infuriating thing on the planet? Yeah… Hoppetee’s voice is that of a child at play…I’m not making a cute metaphor here, his voice is literally the laughter and giggling of a five year old child. He laughs and says “Hooray!” when he jumps, and chuckles frequently. I’ll admit, the laughter, coupled with his incredible smile does fill you with a sense of joy, but it soon drains on you… Especially as you hear the same laughter replayed over and over. 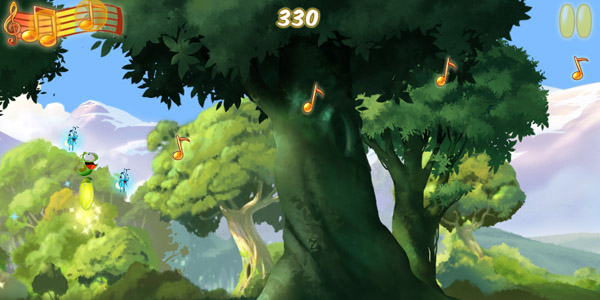 Hoppetee is a fine example of an endless runner. It has a lot of charm and character, and the titular character always has a massive smile across his mouth that is nothing if not infectious. It is held back by often sluggish controls, and sound effects that rapidly become very draining. All in all the game is still fun, but just lacks a certain something that makes you want to keep coming back. Regardless, if you are an endless runner fan who is looking for something new, then there is definitely some worth here.