Hoopworld is a 3 on 3 arcade basketball game for WiiWare download service. 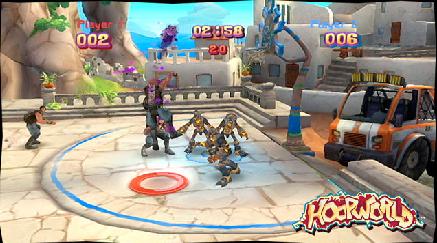 Story
I didn’t really notice much of a story in Hoopworld and honestly there isn’t really a need for one. The game does have many different teams with their own personalities though, giving each player a choice to pick out their favorite and take it to the court with some b-ball and knock out anyone who gets in your way to the championship.

Gameplay
Using the standard Wii-Mote and Nunchuck set-up, you take your characters up and down the courts. Time really needs to be invested in learning how to play though as the control scheme is more complex than standard basketball games. Besides the standard movement of you character and a few other actions, everything from shooting to using some of your “kung-fu” moves is mainly done with motion control with the Wii-Mote. When I first started playing I was confused a bit on how to shoot properly as it felt awkward going in, but in time this method becomes second nature if you have the patience to learn.

What I really enjoyed was the arcade feel of the game. There are power-up boxes that will appear on the court that you can pick up and activate with the A button. This can truly effect strategy of how to play and win each match. The first time I got a power up which was a bomb that knocked everyone down in my path. There are also many other power-ups in the game such as a shield that will block your opponent from being able to shoot in their goal and some that can effect the ball allowing you to get in a proper shot. The thing is your AI you go against are not stupid and they can get power-ups too so you must use timing and strategy to take full advantage of any item you receive. 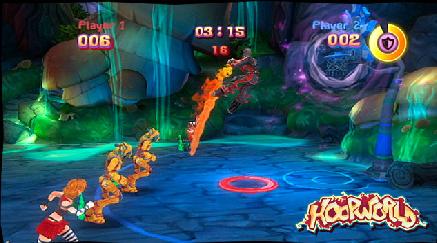 As far as the defense moves, the game is advertised as a “basketbrawl game”, which is true, but some of the attacks seemed a little generic and stiff which was really my only minor gripe as I think I went in expecting to see more special attacks you can deliver.

There are 3 different modes to play on. Quick Play, Tournament, and Survival. Quick Play is pretty much a standard match with you vs the computer or another player. Tournament mode lets you go for a championship trophy and take on many other teams in a set number of rounds. My favorite mode, Survival mode is where you just keep playing until the opponent get’s the best of you. This is a challenge but is a lot of fun.

I mentioned the controls being complex earlier for a reason. There are many ways you can play based on how good you are at the game. A better player who is more experienced in HoopWorld will have the upper hand. I say this because certain skills in the game, such as making a precise shot come with experience in playing and can be learned with practice. This does feel rewarding later on as it feels the game wants you to have more than a shallow control scheme and learning techniques and strategy will really help you in some of the games harder difficulties later on. 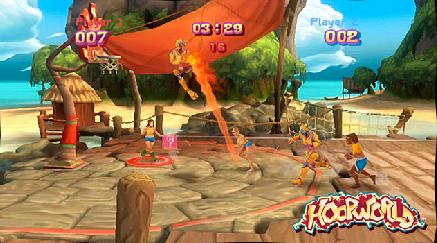 Graphics/Audio
The audio is upbeat and seems to go with every playing area smoothly. The sound effects also really make me feel like I am playing a game of arcade basketball as well from the ball shots to the sounds of the special items that will give the player the full arcade experience.

Graphics are a strong point in HoopWorld. The game all of the way through feels 90’s to me. The logos, the characters, everything feels retro. For this reason I think anyone who grew up in the period would love this game. I also liked some of the small touches added during gameplay such as the awesome slam dunks that leave the net on fire and many other of the animations added to the characters. The models are detailed and colored well which makes this game visually appealing and give its a bit of personality. The courts are very well detailed and lively as well which makes unlocking more later down the line motivating as I felt the need to press forward to get more.

Overview
When playing HoopWorld I though of games like Mario Hoops 3 on 3 and NBA Jam, but HoopWorld is a bit different as it makes the player learn to get better and it feels more rewarding when you learn to pull of several abilities in the game. As I mentioned, I do however feel that the defense attacks could use some work and the controls may leave some players chucking their Wii-Mote across the room in frustration. Overall, with it’s unique control scheme, smart AI, and the well done arcade take on a basketball game HoopWorld is a nice addition for the WiiWare and I recommend it to anyone that is looking for a mondern  yet retro experience on their Wii.