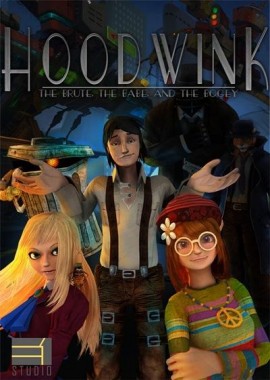 Note : this game will not function if your system uses an Intel HD Graphics Card, and is not compatible with Windows Operating Systems pre XP

The quirky point and click is almost a genre in itself, provoking many fond nostalgic sighs as people cast their minds back to the joys of titles like Grim Fandango and Monkey Island. Hoodwink is the latest game to try and squeeze itself into that small but often golden box, and comes to the world from a small Malaysian developer called E-One Studio. At the moment exclusively distributed on EA’s Origin service, the game description boasts a flood of buzz words that seek to hook in potential buyers. Things in this game are not only quirky, but ingenious, vibrant, outrageous and absurdly dark. Is that so?

As a point and click adventure, Hoodwink has a very simple set of gameplay mechanics. Main character Michael is controlled only by mouse, with a context sensitive left click accounting for all talking/pick up/open actions as well as general movement. It isn’t the smoothest thing in the world, and moving around can sometimes be a pain. Double clicking makes Michael run, but not if the area you click on is a screen transition zone, and these tend to cover the majority of where you want to go. One plus is that the inventory system is simple and never gets too cluttered, and the journal is integrated in a way that means you can ignore it completely and play by your own wits if you like. Sadly your own wits aren’t too necessary throughout the game. 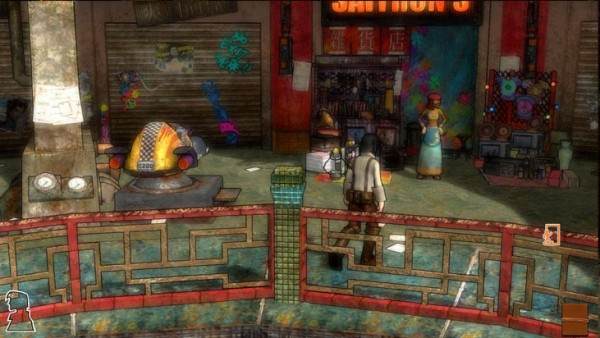 The puzzles are a mix of too easy to bother and hard for the wrong reason. One of the first teasers has an obvious solution – turn a crank four times. It took me ten minutes because the control of the mechanism was so  picky as to what counted as a turn.  A similar lack of satisfaction is to be found in potentially trickier puzzles as they are rendered moot as the game automatically flags up what item you need to use when you click on the door/box/whatever. If it doesn’t flag it, you don’t have it yet. There are some moments where a bit of puzzling is involved, but there’s nothing here to stretch or surprise your grey matter.

Some solutions involve mini games of which the only feature is clicking a lot, and despite some flashes of imagination in the design (some Che Guevara cockroaches hint that there could be something far better lost in here)  they don’t make up for a largely uninteresting, brief adventure. The inability to save outside of end of chapter check points also adds to the frustration, and despite the fact it’s a short game the inability to skip through dialogue means that any form of repetition is extremely annoying.

The main protagonist is Michael Bezzle, a small time thief living in the decaying metropolis of Global-One. The city and it seems, the world, is run by evil mega corporation UniCorp, who are the sole suppliers of drugs that protect the citizens from the effects of a mysterious global disaster. Michael lives in the lower level slums of the city, which is also populated by a copious amount of police, and some robotic ex humans who have chosen to get their brains preserved in jars and attached to mechanical bodies. 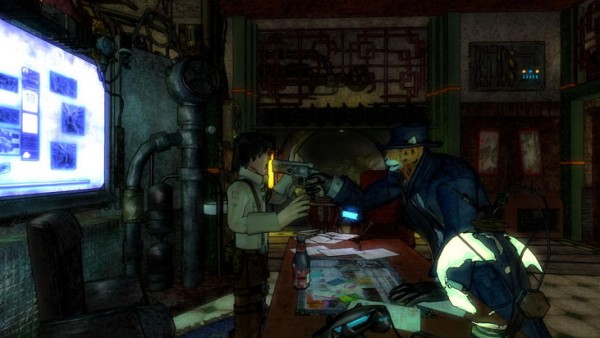 Despite the post apocalypse setting things are kept light hearted,  best exemplified by Michael’s main  objective: to propose to his girlfriend, a wheelchair bound pawn shop owner called Francesca.  There are a small handful of supporting characters who range from the intriguing (the anthropomorphic tiger detective)to the dull (Francesca, who seems to detest Michael). The game is very much focused on Michael though, and he fortunately has a good helping of personality and wit. There a pop culture references aplenty to be found, and the world created here is cohesive enough to create some immersion, even if the game is far too short to explore anything in depth.

The whole thing is very much a tease for the main feature, with the game ending quite suddenly just when things start to become interesting.

The current Origin listing makes no mention of this being an episodic game, so it’s not until the ending suddenly happens that Hoodwink is revealed to be only part of a story, so don’t expect any sort of satisfaction or closure. Despite an attempt to build some sort of cliff-hanger there’s precious little here to tempt players back to complete the story. Especially when the current price of the game is taken into consideration.

Asking $14.99 for a game that can be completed in under two hours and has a replay value of zero is nothing if a little crazy, especially when PC gamers can scoop up infinitely better and longer games  elsewhere. Speaking of Steam, the title is going to make an appearance there soon, after a three week exclusivity period on EA’s Origin service concludes.

There is no indication as to how many episodes Hoodwink will take to wrap up as a story, but everyone concerned would be better served by waiting for a bundled, complete series before taking the plunge.  There are elements here that could grow into something interesting, but at the moment Hoodwink is just fulfilling the less than stellar implications of its name.

As the screenshots throughout this review easily demonstrate, Hoodwink has a very strong visual identity, using a combination of the Leadwerks game engine and cell shaded visuals to create a distinctive dystopian future. Environments carry a lot of detail  and texture, with muted colours, bold black outlines and a slight haziness in the light effects adding to the atmosphere. The town is almost reminiscent of Final Fantasy VII’s Midgar, although with a more humorous edge and on a far smaller scale. 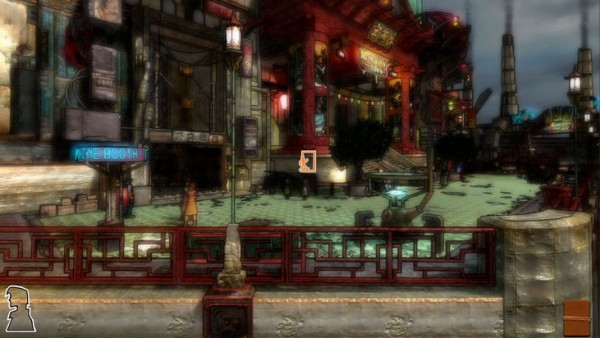 Character models can offer little in way of expression, but benefit from the highly stylised art style and thankfully move around with little awkwardness, a trick which many games don’t seem capable of pulling off these days.  The voice acting for Michael is entertaining, but sadly his relationship with his girlfriend (the driving force of the story) is ruined by having Francesca voiced by a woman who sounds old enough to be his grandmother.

Despite the strong enough visuals, the audio aspect of the game is very messy and sparse. The music is a catchy little jazz number when it bothers to be around, and sound effects are also rather minimal. The background track often plays through once then forgets to get going again, leaving Michael running around in absolute silence. Certain bits of audio are also badly mapped, resulting in a record player still sounding even though Michael has changed area. Ambient dialogue also repeats very quickly, looping before you can leave an area and generally repeating the same handful of lines throughout the entire environment.

The visuals are Hoodwinks strongest point, but sadly they are undermined by lacklustre audio that despite some decent music and voice acting just isn’t in the right place at the right time.

Style over substance, Hoodwink is too short and too bland in its puzzles to make any serious impact in the point and click pantheon. The art style is unusual and the design and world are strong, but that and some solid character work can’t make up for the fact that actually playing it just isn’t that fun. Perhaps the complete story unfolds into a greater whole, but at the moment it feels like Hoodwink has been unnecessarily chopped up in order to stretch out it’s money making ability.