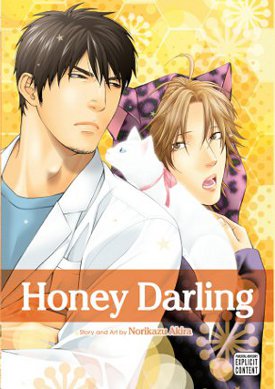 Overview:
Yaoi, for those that don’t know, centers around the relationships between two male characters, so it is often also known as Boys’ Love in English.  Needless to say, if you’re the type of person interested in the bond that can be shared between two men, Honey Darling might be your cup of tea or even a gift for that special someone.  The author, Norikazu Akira, has previously written Twin’s Labyrinth, Heart Strings, and Beast & Feast, so she has a decent amount of writing and art under her belt for Honey Darling and knows what the ladies (or guys) like.  Want to be sure if this is the nightstand book for you or a friend?  Keep reading to find out.

Story:
Honey Darling tells the tale of Chihiro, a do nothing kind of guy, that is completely non-committal to anything.  That is until the day he happens upon the kitten Shiro and finds the drive to want to do more with his life.  After Shiro gets sick and must go to the vet, Chihiro finds that he wants to learn how to be a vet and as luck would have it the big strapping vet Kumazawa is willing to take him in as a housekeeper.

The interesting thing about Honey Darling is that although it is a yaoi, it becomes more and more about cats and vetting. Realizing this herself, the author actually puts in side chapters from Shiro’s perspective and about vetting itself.  This less subtracts from the story and more adds to the depth of the characters by showing more about what Chihiro is going through and doing in his time living with Kumazawa.

Those yaoi fans interested in lots and lots of sweet man love action will be kinda disappointed with this, as the story is based more on Chihiro and Kumazawa growing to love each other then jumping into things.  Not that it doesn’t happen, but the story works up to it making the relationship the story goal and not the story matter.  In this way Honey Darling is actually a good intro for those interested in getting into yaoi than the more hardcore fans.

Characters:
The characters are actually very well developed throughout the story.  It is nice that the character pool is kept generally low, focusing mainly on Chihiro, Kumazawa, and Shiro with other characters providing outside views and conflict.  So the main three drive the story, while the others will help steer or push it in different direction.

Animals lovers will definitely like this as well as besides Shiro actually being a cat, both Chihiro and Kumazawa describe and see each other as the animal they are closest to, a cat and bear respectively.  This not only gives a good starting point for understanding the characters, i.e. Chihiro being drifty and quick to drop things when he’s bored or it’s too tough and Kumazawa being stern dominance as well as big, with beard scruff.

The secondary characters are a bit more flat, who for the most part can be summed up in their first few lines or introductions.  They are mostly there simply to give the main characters people to talk to, but it would have been nice to see at least a little more depth out of them.  The way the character interact gives the feeling that much more could have happened to expand the story, but instead it stays fairly short.

Artwork:
The art of Honey Darling has three distinct ranges within the story itself.  The first is the most common, where the characters have a good amount of detail and are the general representations in the story.  This one is probably the best as it makes the characters look the most like regular people, as well as showing off how good the characters actually look.

The second style is halfway between the standard characters and chibi style.  The detail is toned down to display one specific type of emotion, in most cases this is ire between the main characters and some side character.  This is a little haphazard, as the characters are made to look angry, but at the same time cute.  Though looking cute all the time is probably a main tenant in yaoi anyway.

The final style is really just showing off the characters as their animal side.  For Chihiro, this means having cat ears whenever he’s being aloof and catty, from sleeping on the bed with Shiro to his surprise at his feelings for Kumazawa.  The bear aspects of Kumazawa don’t show up nearly as much in drawing as Chihiro, but they still happen a bit and in pretty humorous ways.

The final aspect of the artwork is probably the main elephant in the room, with how much the manga actually shows.  Hardcore fans might be a little disappointed, but for the most part the naughtiest bits are blurred out white.  Scenes still take place and actions still happen, but imagination is required to fill in all the little (and big) voids.

Overall:
Honey Darling is a pretty fair Boys’ Love yaoi, that provides a good start or introduction for anyone interested in seeing what they are about, but worried about seeing too much too quickly.  The story in some places feels a bit rushed, in that a lot more could have been expanded and more character depth could have been done, but for the most part its good at what it does.  Ladies (or guys) looking to get themselves a little something for themselves or a friend, who has a soft spot when it comes to pets, can probably enjoy what Honey Darling has to offer.  Though hardcore yaoi fans would probably get their kicks elsewhere.