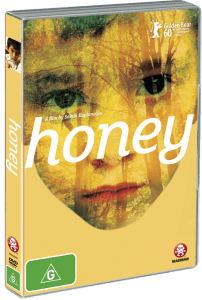 While it can be hard sometimes to remember there is a cinema outside of Hollywood, I do take great pleasure in watching films from Europe, Asia, and the Middle East. There’s a certain appeal to examine a film whose narrative, cinematography, and inherent values are so different from the ones we were raised on, and it provides a way of looking at the world that we may have never seen except through the eyes of the camera.

With that all being said, sometimes there is a tendency for us to privilege foreign films as something exotic and to be revered. Maybe it’s that my expectations were too high – the film did win the Golden Bear in 2010 -, but the film Bal (or Honey, as it is translated into English) fell a little short of what I had anticipated.

The narrative centres on a young boy, Yusuf, and his family. Yusuf is a shy boy with a stutter, and can only speak in whispers to his father, who works as a beekeeper. He attends school during the day, but spends most of his time with his father in the woods, watching him collect honey. However, the honey crop for the season is failing, and Yusuf is having problems learning how to read at school. When Yusuf’s father doesn’t return home from a trip to collect more honey, his world begins to turn upside down. 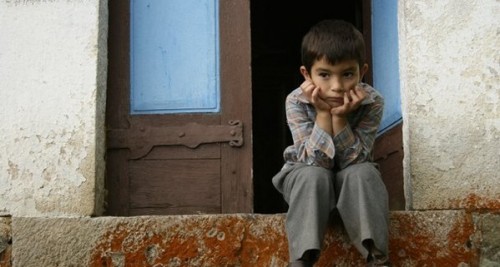 Pondering the meaning of life, obviously.

The film is actually the last in a trilogy (the other films are Egg and Milk), which examines the life of Yusuf in reverse-chronological order. Essentially, Honey reveals Yusuf at his youngest point, and is a coming-of-age film told in a different way to the ones we are accustomed to. It examines life as an outsider, and suggests that, perhaps, there is never a true end to growing up; instead, each event is a little push in the right direction.
While the plot seems really sweet (I was so excited to watch this film when I first heard about it), the way it is told leaves a lot to be desired. Since cinematography is such a strong element of Honey, much of our time spent as viewers is on looking at what’s on the screen…and then looking some more. The actual story inches along minute by minute in what is undeniably a drawn-out process – so much so that I resorted to checking my emails while watching. It doesn’t help that Yusuf is silent most of the time too, and even when he speaks, it’s barely above a whisper.

And on the subject of Yusuf, let’s just say he’s cute but eternally frustrating. He’s so shy you pity him, but at the same time the narrative doesn’t go into enough detail for any real empathy to be established between Yusuf and the viewer. Instead, he floats between being adorable, pitied, and irritating – when a child doesn’t even talk to his own mother and there is with no background story, it may arouse curiosity to begin with but eventually it just becomes tiresome. With that all being said, Bora Altas does a wonderful job of portraying this sad and forlorn child in what was undoubtedly a very difficult role to play. 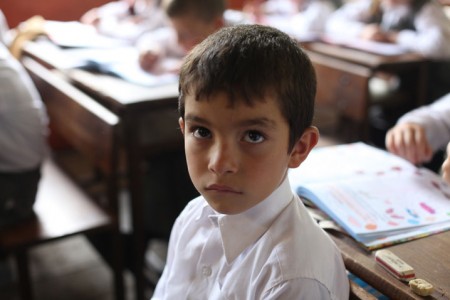 Yusuf bites his lip so much, you have to wonder if his lip constantly bleeds.

The other characters in the film are secondary to Yusuf, and when I say secondary, I mean they come second to everything else. There really isn’t much to go on when it comes to Yusuf’s mother, Zehra, and father, Yakup. For a narrative where the central character’s ‘coming-of-age’ involves his father, there are only glimpses and short segments where he appears – and even then, he speaks very little. Yusuf’s mother is definitely the more relatable character of the two, and her (very short) story paints a picture of a mother who cannot emotionally connect with her son.

Where plot and character development fall short, though, Semih Kaplanoglu makes up for it in cinematography. The film is an absolute delight to watch: the shots are saturated with bright colour, the contrast between the smallness of Yusuf and the largeness of the world around him is mesmerising, and the beauty of nature really pops out. As I mentioned, the film moves slowly in terms of plot; however, the wonderful cinematography provides some eye candy while the narrative slugs along. It also helps, then, that Yusuf is adorable to look at and his mother’s costumes are so simple yet charming; the film really reminds us of the visual delights in life. 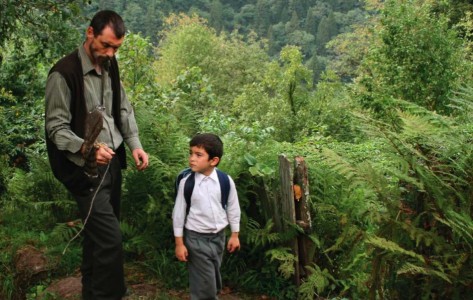 The beautiful visual contrast makes this film a delight to look at.

Soundtrack and sound effects-wise, the film is also very well made. The test of a good soundtrack is whether it takes from the story, or enhances it – if you have to consciously detach the music from the visual, the soundtrack has done its job well. Honey’s soundtrack was one that continually adds to the atmosphere of the film, and often communicates what Yusuf cannot say. The sound of nature that was ever present in the film only adds to the atmosphere of Yusuf’s way of life, and all in all I’d have to say the audio element was wonderfully executed.

The DVD only comes with the theatrical trailer of the film, as well as the standard Madman trailers. While I always feel like having extra features is a nice addition to a DVD, I’d have to say in Honey’s case I’m glad they didn’t include one. The film was long enough as it is, and the only extra feature that I would have appreciated is the trailers for Egg and Milk, just for a bit of extra background information.

Honey is a film that is visually beautiful, but sometimes having something nice to look at just isn’t enough. While I enjoyed some aspects of the film, overall the story was too slow and the characters too underdeveloped for it to be of any real interest to me. If you are going to pick up Honey, here’s a recommendation: check out Egg and Milk first, and watch the trilogy in the order Kaplanoglu wanted you to.