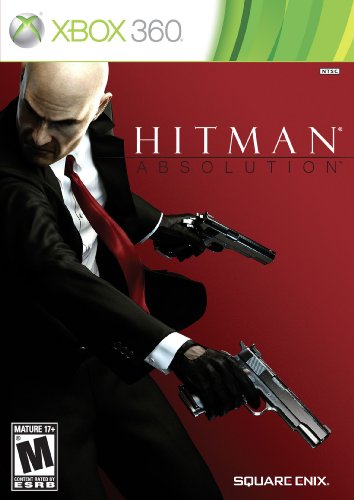 Overview:
Agent 47 has been making bald cool since he first set foot the gaming scene. With the red tie and suit ensemble, not to mention the barcode tattooed onto the back of his head, he’s looking a bit conspicuous to be an assassin, and easily recognizable once spotted. Yet here he is, back again doing what he does best – the agency’s dirty work, with no questions asked. Only this time his own feelings interfere, showing a strangely moral side to this cloned super-assassin.

Story:
Hitman: Absolution is easily one of the most story-driven Hitman games to date. It’s that classic tale of spy gone rogue, because after a change of heart Agent 47 abandons the assignments he was once loyal to, searching for answers and protecting young girl while he goes it alone – for ultimate dramatic effect. It’s overused and certainly lacking originality but this storyline allows players to see a different side of the stone-cold killer while the writers of the series tie up a few loose ends in the story and then pave the way for what will most likely end up as next gen Hitman. 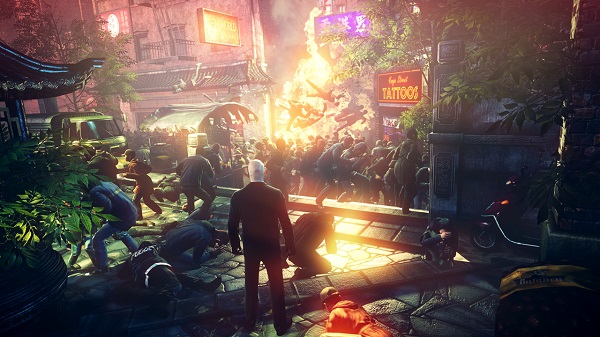 It is helped along by well-animated cut scenes: high production values and convincing voice actors sell the story to you and make them more than just a watchable stop-gap between missions; the only downside being that they don’t take into account any disguise you were wearing. The way the game opens with the developer/publisher names rolling in-between frames shows that the creators clearly rated the story as one on a par with that of a film, and without want to inflate egos any further, it does give it the feel of blockbuster. I say if they’re good enough to pull it off then do it, as many other games have started to feature this technique as the lines between video game and film become more blurred.

Gameplay:
Gameplay takes a direction proving popular with players the past year or so – and that is giving gamers a choice of routes through the same level by having very flexible game mechanics. Like Deus Ex: Human Revolution or Dishonored before it, Hitman offers players a range of options at tackling different situations where before, in Hitman and in gaming generally, there was always a set way of doing things dictated by the developer.

You can use stealth or force in a number of different ways, utilizing different balances of the two. Avoid enemy casualties entirely by sneaking past unnoticed, distracting them with a thrown object, or waiting for them to turn away or move off of their own accord. Pick off enemies with your silenced pistol, garrotte unwitting henchmen then hide the bodies. Disguise yourself and make a move out into the open only to be questioned; then lure those who have realized into a secluded area and finish them off. Or go in guns blazing, assault rifle or double pistols in hand, taking out your target and many others. 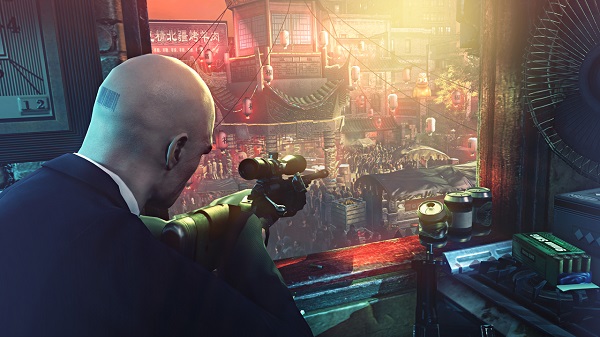 IO Interactive has taken interactivity with the environment further for the series with Hitman: Absolution. There has always been something in terms of hiding bodies and contortion from your bullet impact, but now there’s more. You can shoot out someone’s feet from beneath them in order to get a clear shot at the kill, and as well as the many conveniently placed dumpsters, you can actually execute the ideas that come into your head by pushing a body over a wall or off a ledge to keep them out of sight.

Also, in touch of typical Hitman, AI aren’t dumb in the sense of badly programmed but have been purposely made to look stupid. For comic effect you’ll overhear conversations of someone trying to get out security work before it’s too late – last day before handing in the badge kind of jokes, among others – and it’s clear the developers enjoyed coming up with them by the creative scenarios they’ve devised to amuse you in this area. Plus the way in which you can strangle someone in the vicinity of his comrades while they all look the other way ensures gameplay ticks along, even though you have to ask why the wouldn’t be keeping in radio contact regularly in order to clock someone not responding and cotton on to 47’s infiltration.

The exception to this intentional stupidity is the check pointing system, which is really a bit stupid. You activate your own save checkpoints by approaching the appropriate beacons dotted around a level. Unfortunately, the result is an easier to miss save point making for further deductions in progress when you die and are reverted to last save. Its intentions were fine, because it’s obviously done to try to limit the saves to where you want them to be, hence avoiding any unwanted parts where you are trapped in by your most recent save…only it doesn’t fully eliminate this eventually either, so was done in vain. 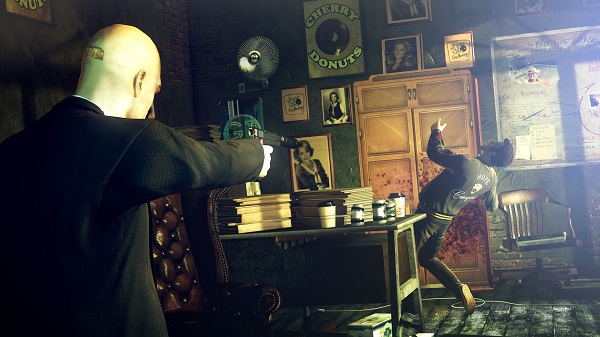 One new feature is Instinct, which is a state of being activated by holding down the RB button. The explanation behind this is that your skills are so honed as an assassin, surpassing that of a normal human, you have a sixth sense which allows you to view the world in grey with your enemies highlighted in color.

Linking in with this Instinct mode is another addition called point-shooting, where you can break from cover and time stops while you line-up your shots in order to reflect your fast reaction times. Once you’ve marked the group of enemies for death you confirm your selection and an automated sequence plays where they are taken down one by one in quick succession. From a technical standpoint it isn’t flawless. A well worked development yes, but not without the minor issue of the camera juddering suddenly if you didn’t line up the targets to the game’s liking.

A lot of players, myself included, who played the Hitman: Sniper Challenge (given to most as a pre-order DLC bonus) were left wondering what relevance it had to the Hitman franchise and the then upcoming Hitman: Absolution. With Contracts mode I think these questions have been answered, through the clear parallels in presentation and score-chasing. 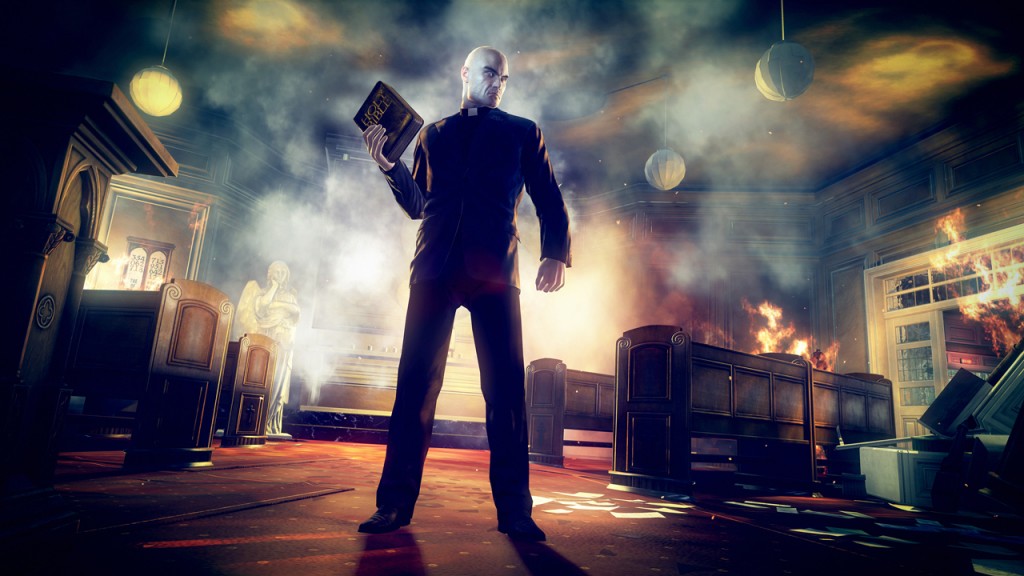 Contracts mode allows you to design a hit for others to attempt, or complete other people’s custom-built assignments. But there’s no level editor; creating an assignment is as simple as doing what you intend for them to do when on the mission maker mode, and the game makes a record of this and when they attempt it will score them based on how well they match your criteria. This means the better you do at your own mission, the more complicated it will make it for them, potentially sparking all sorts of competition among friends as they try to beat each others’ high scores.

Visuals & Audio:
Aside from negligible visual glitches that crop up when you give a player free reign to drag the AI bodies around, it’s a consistently good-looking game. From your surroundings to your costumes, it’s constantly being refreshed to give you something to look at. That said, female fans will probably have something to say about the over sexualization of all women featured on the game – a la that controversial trailer featuring the latex-clad, weapon-bearing nun assassins – which, frankly, is an unnecessary step to ship more units given the quality of everything else. Sound-wise it is also in good form, having scene-setting string instruments in the musical score when it need to create a tense atmosphere in addition to the previously praised voice-acting.

Overall:
While you can be as subtle as a rampaging bull smashing down a wall and goring the target with its horns if you choose (at least on the lower difficulties), you get more out of the game if you use the stealth elements. However, this has always been true for Hitman. Where Hitman: Absolution differs is that you can now do a mixture of the two and in more inventive ways than ever, leaning towards either side of the stealth-action divide as and when you see fit. Being able assess a situation then pick your own path through a level – a level which your friend might approach completely differently – means that not only are repeated play-throughs plausible but they’re actually enjoyable.