To be honest, back in school I never paid much attention in history class (ancient or modern) . So imagine my surprise when I found out World War II was won with simple touch controls and tower defence action over just 21 missions! Introducing Hills Of Glory 3D, a tower defence title with a World War II theme that for some reason thinks boasting it has 3D graphics is somehow still considered a selling point so significant it needs to be included in the title. Hills Of Glory 3D takes no risks in delivering a watered down strategy experience for casual gamers but comes in a nice, polished package for your thumbs to fiddle around with. 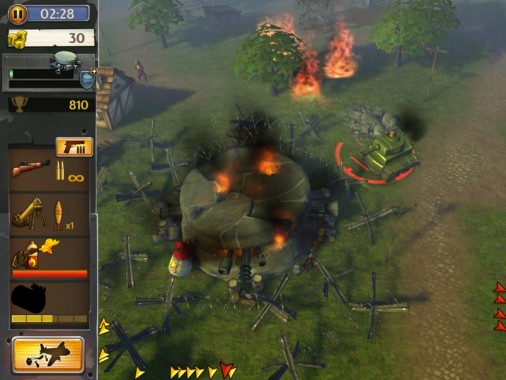 Hills Of Glory 3D is a simple tower defence title. Well, they call it tower defence but you don’t really build any towers or turrets unlike most other titles. Instead, you just defend the base with the weapons you have, making for a much simpler gaming experience. This is a double edged sword however, as while it does take away much of the complexity, the game then becomes a little too easy. It then starts feeling more like a button masher (or should I say screen tapper) with very little strategy required….which kind of defeats the purpose of a strategy game. The simplicity does make it very easy to play though. Players take control of a military base and must protect it against all enemies. Tapping shoots a troop and you can rack up combos. Two fingers can unleash a machine gun, two fingers drops napalm, holding can bring out a mortar, you get the idea. Options and weapons are limited as well as variety in gameplay and what you see is what you get. It may take some getting used to remembering the way to use certain weapons but other than that there is a very small learning curve. Of course I should also note Hills Of Glory 3D is free, so you know the drill of what to expect: waiting to play a game, in-app purchases, advertisements, a strong focus on upgrading & power ups and other generic features. 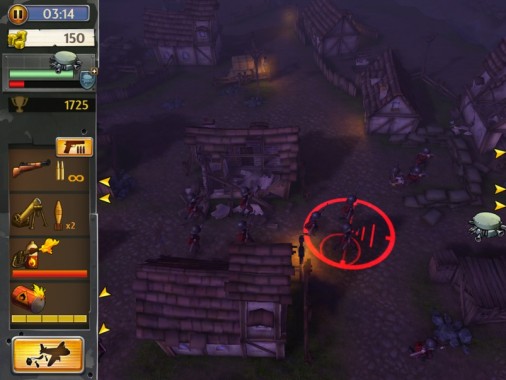 Like many of Chillingo’s published titles, presentation is pretty much as good as it gets on iOS. Graphics are bright, cartoonish, charming and not scared of having some fun. Oh yeah and in case you didn’t guess by the title, it has 3D graphics too! With smooth models, decent animation and nice textures the graphics department of Hills Of Glory 3D is surely a highlight. The soundtrack is pretty much what you’d expect from a military title with drums you’d be more than happy to march along too. Sound effects may not be spectacular but they get the job done. Sadly, voice acting isn’t present which would’ve been a nice touch. 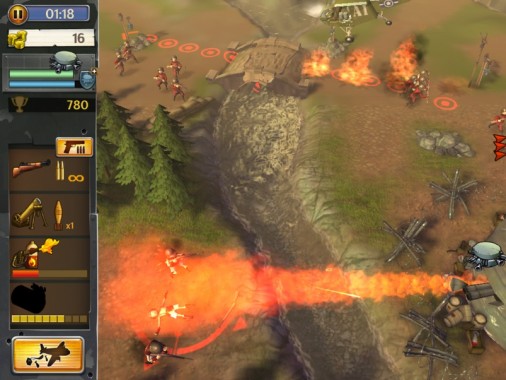 For better or worse, Hills Of Glory 3D is very simple, casual defence title. Without towers or turrets to build, gameplay boils down to tapping on enemies in a variety of ways to defend your base without much strategy to it. That being said, Hills Of Glory 3D could be a good gateway game to the genre for some gamers. With a decent soundtrack and bright visuals presentation is splendid and it’s also a free title, so why the hell not? With that being said, I’m sure most games will be left  feeling unsatisfied and wanting more out of their game.