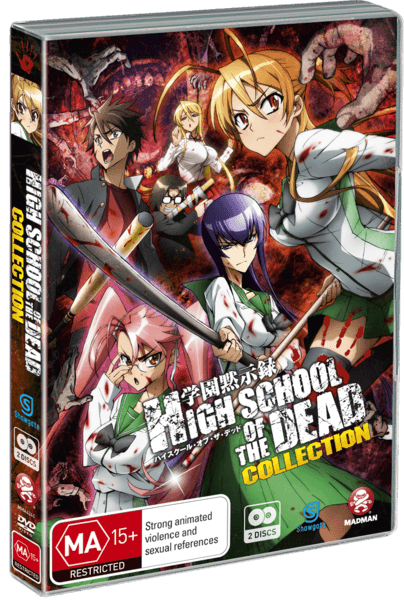 Overview:
The zombie genre has seen it’s fair share of bad endeavours and likewise a fair share of good endeveavours. There are many conflicting opinions on what causes the bad to be bad and the good to be good. Some say that zombies are rarely played as scary anymore. Something I am inclined to agree with, even though humourous zombies have never been too big a problem with me (as long as it’s actually funny). High School of the Dead, leans towards the prior, going for flat out horror. That’s not to say humour isn’t present, it is just drawn from other sources. But how does this formula work for High School of the Dead? Does it survive and thrive or become another one of the brainless masses? 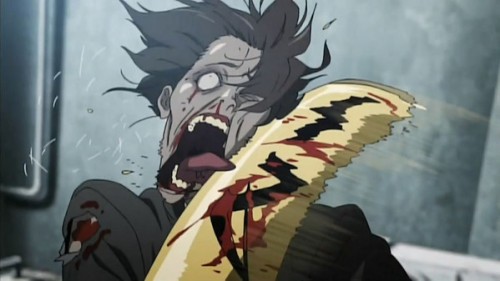 Story:
High School of the Dead has a simple plot, not much in way of explaination is given, but it’s better that way. As you’d imagine this is a zombie anime. A good one at that.

We are dropped onto the roof of a zombie-infested high school and watch as three students fight off the horde to get to higher ground. That is all the explaination required to kick things into motion. You find in this genre that often, the cause 0f the zombification is explained early on to give the viewer clarification of how things got that way. That is the really wrong way to go about doing zombies. Zombies are irrational, mindless creatures. The second you explain how they became that way, it takes away their fear factor. How does it do this you ask? Well there is a quote from Stephen King that goes a little like “Fear is in the unknown”.

That is something I like to match up with a lot of supposedly horror based entertainment. Because it is probably the most truthful statement when concerning horror. The second you understand, you subconsciously begin to think of ways these horrors can be defeated or escaped from at the very least. When it is unknown, there is no shred of an idea of defeating of escaping the horror, it’s incomprehensible. High School of the Dead understands this concept and rolls with it. It ramps up the horror and despair with each and every episode. 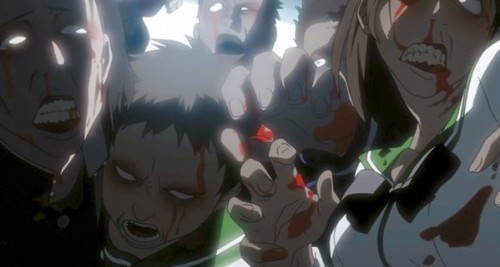 Amidst all of this horror, lies sex. Sex or sex appeal seems to always go hand in hand with zombies. High School of the Dead while laying on some heavy fan-service does provide some insight with it. Which is both profound and depressing. The characters have been faced with the very fact that their lives as they knew them are over, now they are nothing but animals, fighting to survive against their hunters. Like animals, they are impulsive, survivalists, living on instinct.

As they try to cling to any shred of their humanity they sink deeper and deeper into their animalistic desires. Each episode becoming more and more like rabbits hunted by foxes. Pushed into a corner by their most basic of instincts is the instinct to reproduce, to continue their line even if they die doing so. This instinct is apparent in all the characters, however never openly stated. Never before has fan-service been utilised in a both effective way, not to mention a lot of it is pretty funny.

Overall High School of the Dead is an unexpectedly profound and much deeper than it’s surface would lead you to believe. Sadly the story ends not truly concluded, begging for a second season. With the popularity of this series, I think a second season is a given and shouldn’t be too far off. Only time shall tell. 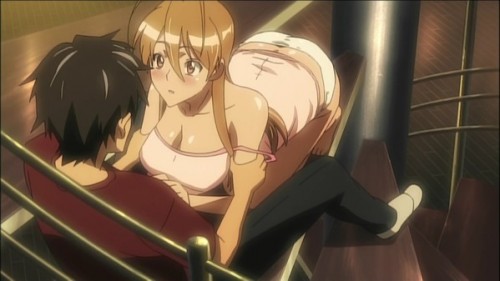 Characters:
The cast in High School of the Dead is both simultaneously stereotypical and deep. The level fo depth given to these characters is astounding. Although on the surface they appear to be common anime stereotypes, as the series progresses and they become more and more like animals, the characters shine true.

It is perhaps the most refreshingly honest portrayal of characters in anime in a very long time. Their hopes and dreams have all been ultimately crushed and all they have left is each other. As the series dives deeper and deeper into the breaking of these people, we witness some of the most heart-shattering and depressing character development in years. It’s truly a sad case when you start out with well-adjusted students at a decent enough school and by the time the series wraps up they have become nothing but blood-drenched beasts desperately clawing away clinging to their life and humanity, all the while causing themselves to lose sight of the very thing they are trying to cling on to.

Artwork:
The art and animation on display here is simply superb, with a lot of brilliantly designs scenes. The first scene on the rooftop is easily one of the most memorable opening scenes of anime I have seen in a very long time.

The animation is incredibly fluid and never static. Which is exactly what I look for when watching anime, static animation can be incredibly jarring and for a series with as much action as this, it was a neccessity to be this animated.

All in all it was a excellent job from the art department, with some jaw-dropping animation and artwork on display that I won’t soon forget.

Audio:
Both audio tracks of High School of the Dead are quite well done. The Japanese audio is faultless and the English dub from Sentai Filmworks is a great adaptation with each actor portraying their character very well, whilst retaining the emotion of the original cast.

The soundtrack is exciting and adrenaline-fueled, never missing a beat, giving a perfect mood-setter for the action unfolding. When a soundtrack perfectly compliments what is occuring on screen, you know it has succeeded. 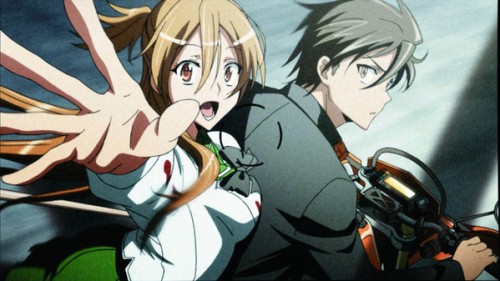 Special Features:
Unfortunately there was next to no special features on this collection from Madman, which is really disappointing consider their track record for amazing special features usually packaged in which their full season collections. This time around there is nothing but trailers, textless openings and endings and a reversible cover. While this all may be nice, it is really below the expectations Madman has set themselves. Whether this fault lies with Sentai or Madman is not apparent. However unfortunately it just does not cut the zombie in terms of special features.

I give High School of the Dead Collection: