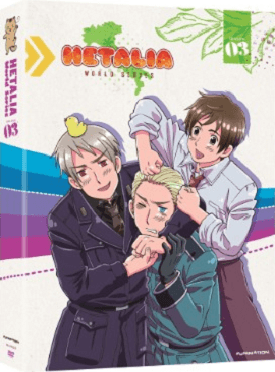 Overview:
Anime come from many different sources, but usually they originate from a light novel or a manga and sometimes they are even created from scratch. However there are also a few anime created from a very different source, that of a webcomic. Hetalia is such an anime series which is based off a popular Japanese webcomic created by Hidekaz Himaruya where not only do countries come to life, the do so in hilariously stereotypical ways. Hetalia Axis Powers has seen two seasons already and now FUNimation has brought the third collection of episodes over, also called the first season of Hetalia World Series. Do these stereotyped anthropomorphic countries still retain their same hilarious qualities?

Story:
Hetalia has a unique format that many people may not be accustomed to. Each episode is roughly four and a half minutes long and each episode is then broken into a couple of various jokes or short stories that involve either a couple of the countries interacting with each other or various sight gags. So while the definition of a story really doesn’t apply heavily to Hetalia as a whole, there are a few running gags which hang around for a short period of time. 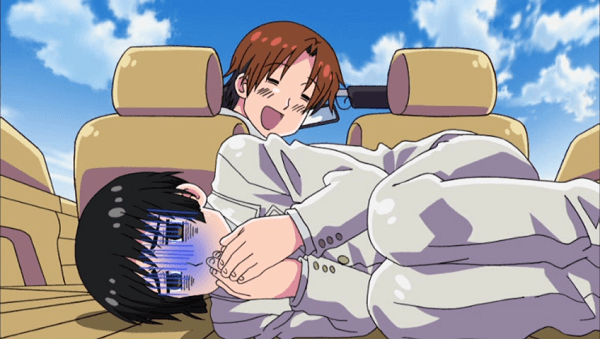 A handful of the stories which are followed and continuously made jokes of include Lithuania, who is being held as a subordinate of Russia, trying to warn a non-caring Poland that Russia is thinking about invading them. Of course it doesn’t help that Lithuania just hates Poland so much that he can’t stand it. To top it off there is the interactions between Boss Spain and Chibi Romano, the cat loving Greece getting close to Japan and America encountering Mr. Tonny the alien.

There pretty much is no overarching storyline for Hetalia World Series, though all of the characters have unique personalities and obvious stereotypical appearances and personalities that match the country they represent. Being that there is no real overall story, Hetalia is an easy show to start watching with very little initiation. Obviously a few of the characters may not be recognizable at first and some of the jokes may fall a bit flat to first time viewers but there is plenty of humor in each short episode that they won’t care about understanding every little thing that is happening. 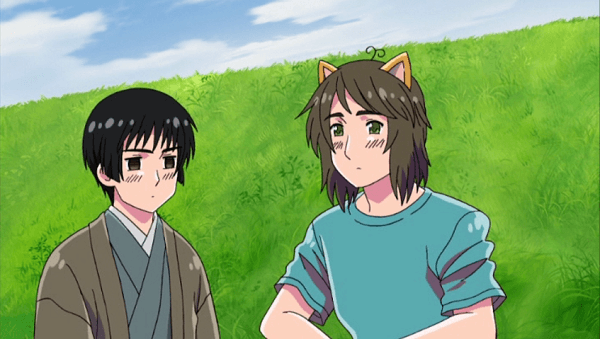 Visuals:
With such a vast amount of characters to work with, it may be a bit daunting to make sure each character looks different in some way, but thankfully the simplistic art style and animation techniques used in Hetalia work wonders. Studio DEEN has incorporated plenty of rather low quality segments where either the characters become chibi-like or even turn into white blobs. Also there are plenty of segments where there may not even be a background to go with what is happening at any given time.

As a whole this doesn’t lend itself to a very visually appealing show, there are plenty of other areas where the artwork takes an upswing. This includes the bright coloristic style, character design (though some newer characters begin to be difficult to tell apart) and a large number of areas to work with. While there are some shortcuts taken with the chibi-like characters, they are still visually appealing at times but those expecting a fancy art style won’t find one here. 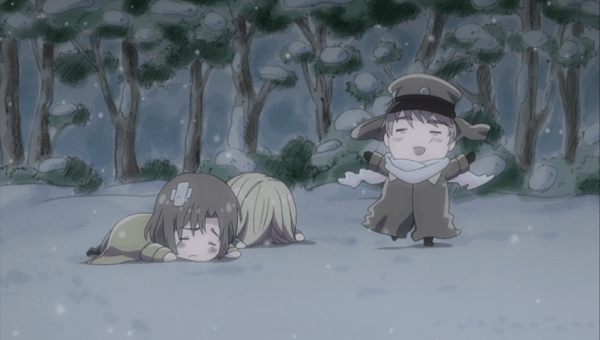 Audio:
While the various jokes made by the characters and the sight gags are part of the humor, some of the best jokes come from the way the characters themselves are portrayed. Every character is given amazing over the top voice work including various accents and tone of voice to match the countries personality. While the Japanese cast is alright in some regards, the English dub goes above and beyond the call of duty that provides amazing quantities of laughter.

Now occasionally there are a few hiccups with some of the accents used by the characters but they are more or less flawless with their consistency. Besides the voice acting there are a few rather hilarious ending songs sung by the original Japanese actors, these vary slightly depending on what country is singing the ending and they alternate between the various main countries such as Italy, Germany and others. There is also a rather funny English song at the end sung by the English voice actor, Todd Haberkorn, though sung is a term that should be loosely applied here. Other than that, the background music in the series is rather plain and usually doesn’t stand out often except whenever it is used for a quick laugh. 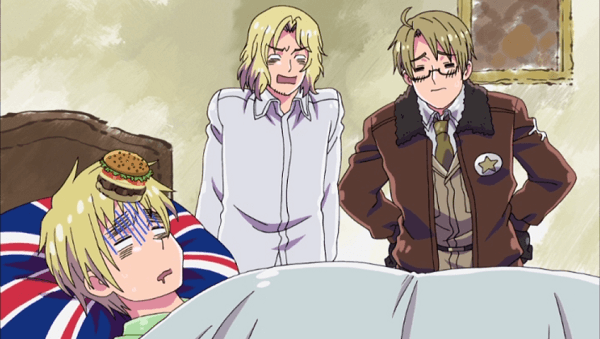 Extras:
Now it is worth taking note that while the whole of Season 3 comes on one disc, another disc comes with the package that is quite literally full of Extras, but there are even bonus features on the episode disc as well. This includes three episode commentaries for Episodes 1, 4 and 6. Each commentary has the English voice actor for the various countries focused on in that episode as well as the voice of the Narrator, Jamie Marchi who also worked as the director and writer for the series.

These commentaries range from being hilarious to a few laughs but usually don’t focus on the episode itself very much. They are a nice little distraction and help provide a closer look at the voice actors working behind the show. 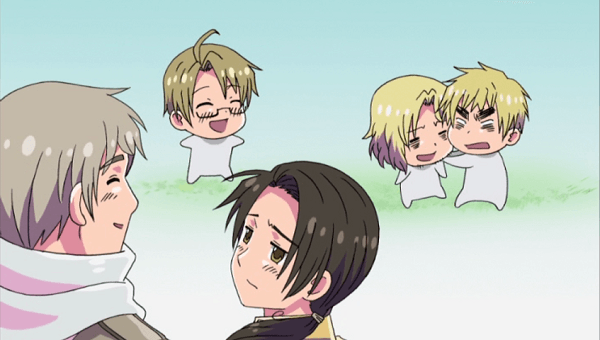 On the second disc there are a slew of other extras, though they mostly focus on Japanese events for the Hetalia series and thus use English subtitles for viewers to understand what is going on. They are quite long in length and fans of the series may enjoy the additional content but it could easily be passed over. There is your standard clean textless songs for the ending of the episode, though only one country is given a clean version.

Now while those may sound rather simplistic and not worth much time, there is a final extra which is just as hilarious as the rest of the show and that is the Outtake reel which is full of the actors messing up their lines. The outtakes are quite lengthy and worth a few laughs though some mistakes grow to be a bit too commonplace to be funny during the six minute clip. 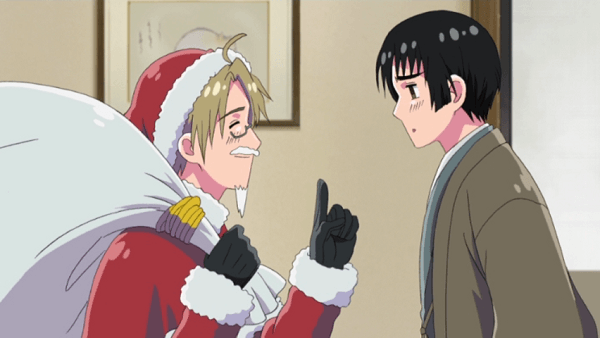 Also worth mentioning is a very large and extensive explanation of all of the historical references that are made during the show itself. While there are a few references that may be picked up by those who know their history, a lot of what is mentioned is very obscure but is actually based on historical occurrences. This extra provides a great look behind what we’re seeing on screen and a decent enough explanation for those interested in learning more.

Overall:
There are plenty of anime out there that try everything to make you laugh. Whether it be sight gags, situational jokes, puns or even basic jokes there are plenty of ways to generate a chuckle from even someone with the worst sense of humor. Thankfully Hetalia Axis Powers Season 3 has so many jokes working for it that even the most jaded person will be laughing a few times nearly every five minute episode. Sure there are a few jokes that fall flat and the series may not be for everyone as there are a handful of mature jokes, however with a very low barrier of entry this anime creates a very accessible show that provides plenty of laughs from memorable characters. Or should I say countries?