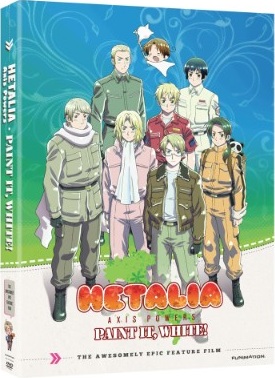 Overview:
Perhaps one of the strangest yet most intriguing anime that I have ever come across is the Hetalia series. It was originally based off of an online webcomic that then became a manga, which then became an anime series. If that doesn’t sound like a rise to success for a writer then I don’t know what is. But what made Hetalia such a success? Well it actually is the fact that the series actually takes various countries from World War II and creates stereotypical characters from them and has them interact in hilarious ways.

Hetalia: Axis Powers has been brought over to North America by FUNimation and the company is continuing to do so into next year with Season 3, but until then we have been treated to a Hetalia movie. To be more precise it is called Hetalia Axis Powers: Paint it, White!. Now Paint it, White! is a full length movie which is new territory for a series that originally follows a short skit format. So how does it fair?

Story:
Now as I mentioned, the biggest change with Hetalia Axis Powers: Paint it, White! is the fact that it deviates strongly from the short sketch comedy that was originally seen in the anime and now contains a plot driven storyline that in my opinion actually helps keep the comedy and the personalities of the various characters flowing at a steady and enjoyable rate. 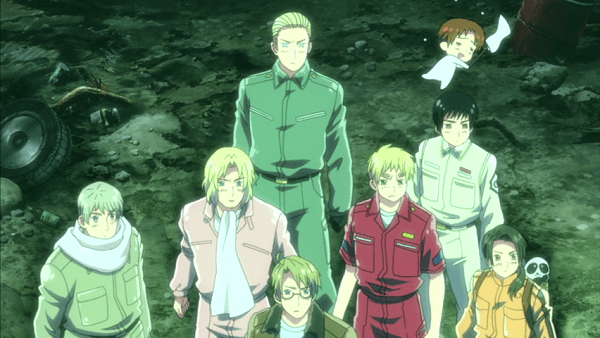 The story of Hetalia Axis Powers: Paint it, White! is that a strange new threat has come to Earth, and it has begun changing people into strange white faceless humanoid blobs with green lights sticking out of their heads like anglerfish. Throughout every country in the world these strange aliens known as Pictonians have invaded and transformed the countries occupants into Pictonians themselves.

Now with the world in danger, all of the countries have organized a meeting to try and figure out what they should do to try and stop the invasion. Of course however, the guys (countries) cannot reach any form of agreement and instead start bickering and fighting with one another. The only person who even manages to make any type of suggestion is America who thinks that the best idea is to use military power to repel the aliens. Of course this doesn’t sit well with most of them and the bickering continues until everyone gets fed up and leaves except Canada because no one knew he was there.

With America being the only country with an idea, every country has decided to try and fight against the Pictonian menace and throw their best weapons against them. Well… everyone except for Italy unless you count a white flag as a weapon. However even the world’s strongest military forces cannot do anything against an enemy who can turn every missile or vehicle of war into something limp, useless and lame.
With the countries thrown in disarray and their weapons unable to do anything to stop them, the Pictonians even begin to change some of the various side countries into faceless Pictonians as well. Can the Allied and Axis nations work together to try and repel the alien invasion? Will there be hilarity on the way? Pasta!? 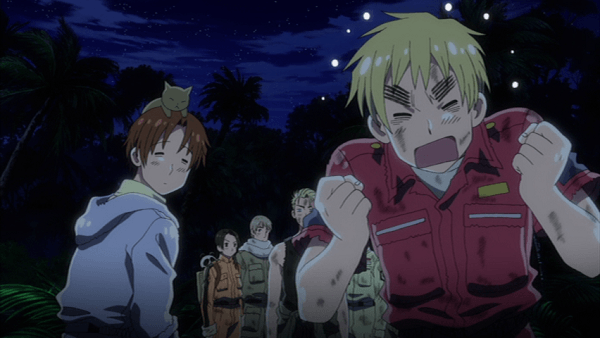 Now as I mentioned earlier, the movie itself structures itself as nearly a continuous storyline which may throw some people off considering the jump in structure. However fans should appreciate seeing their favorite country (if he hasn’t been turned into a Pictonian) in an actual full length adventure rather than the short gags from the original series. Actually this structure makes the series a bit more welcome to newcomers than some would believe. Now newcomers obviously won’t be able to understand a few of the characters’ interactions with one another nor a few of their personalities but it is certainly possible to be laughing extremely often and occasionally very loudly at all of the comedy that is happening nearly nonstop.

Now while the movie does follow a straight storyline, there are a few short skits that are thrown in at random places in the movie that have absolutely nothing to do with the actual plot of the movie and are there more for complete comedic purposes or reference little known historic facts. These include Germany scolding Italy for running faster while running away compared to normal advancing and even a bit about a newly introduced Iceland. 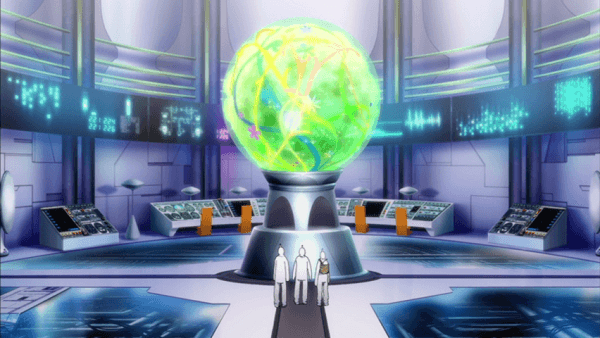 Visuals:
Now the various country representations range from being normal looking and well detailed and then will occasionally switch into chibi form. This is especially true whenever Italy decides to surrender. However most of the time the series looks very great and the animation is rather impressive. It is interesting to see the bland whiteness that the Pictonians create compared to the usual colorful world that Hetalia creates.

The Pictonians themselves are rather interesting in appearance and have some various CG effects which are impressive. Those who enjoyed watching the original series will be happy to know that the higher budget movie does see better quality artwork as well, meaning if you ever wanted to see one of your favorite characters at their best, this is the time. 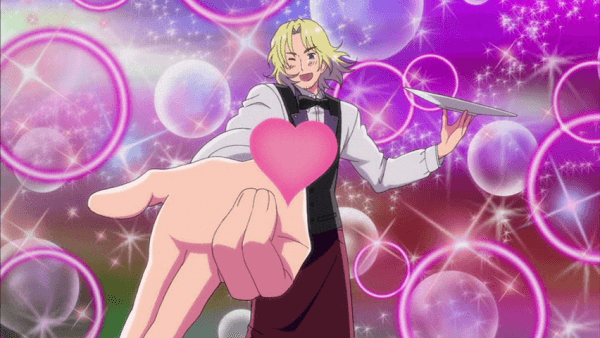 Audio:
Perhaps one of the biggest highlights about the English dub of Hetalia Axis Powers: Paint it, White! is the English dub itself. While the voice cast of the original Japanese dub did their best with the various characters from other countries it couldn’t provide the best accents or even the best voice work with the actors that they had.

Now the difference with the English cast is that they can create all of the various accents to go along with the nationalities and stereotypes of that specific country. Listening to France, Germany or Japan is perhaps one of the best examples of great accents and this creates an amazing English dub that far surpasses the original Japanese one.

Extras:
Now FUNimation has packed a large number of extras into Hetalia Axis Powers: Paint it, White! and while some of these are your standard inclusions such as trailers for upcoming FUNimation releases and the clean version of the ending, there are also a number of other extras that are definitely worth a watch. This includes an Outtakes section that is provided by the English dub which is hilarious and contains plenty of profanity, an Opening Day Stage Greetings that was filmed during the first screening of the film. 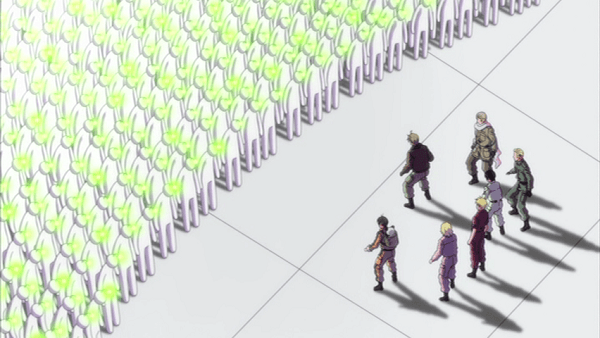 Perhaps the two biggest bonuses are the CAPSLOCK Commentary and the Hidden History Hidden Within Hetalia extras. The Hidden History provides various historical fact sheets to the references made throughout the movie which is interesting and can provide some backstory for references viewers don’t understand. The hit extra is the commentary though, where the English dub cast provides entire commentary the full length of the movie and is a laugh riot that is worth a listen.

Overall:
Hetalia Axis Powers: Paint it, White! is a hilarious experience that provides plenty of enjoyment for not only fans of the original Hetalia series but even newcomers who are just looking for an enjoyable laugh filled viewing experience. The inclusion of a plot makes Hetalia flow surprisingly well and is certainly worth a watch. If you haven’t seen the original series then seeing this movie may make you want to go watch everything that is available just to see more of the hilariousness.