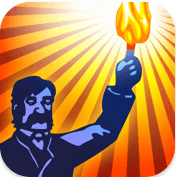 Helsing’s Fire is an epic tale featuring the famous Dr. Helsing and his assistant Raffton, legendary for their monster slaying abilities. When the demon-fighting duo hears word that Dracula has a shiny new lair in The Shadow Blight, they don’t hesitate to head straight into the darkness and save the world from evil yet again.

As soon as players open Helsing’s Fire for the first time, they’ll know they’re dealing with something special. The game starts right out the gate with phenomenal Castlevania-esque gothic music and cartoony (yet eerie) visuals. Characters and enemies are all made in a very minimalistic style (using only two or three colors), but each manage to still be very highly detailed. The game levels are all unique and look great, and the music is exceptional throughout (probably the best this reviewer has heard in an iPhone game). All the animations are smooth, but what particularly stands out is the phenomenal lighting effect. The dynamic lighting works so flawlessly and seems so natural that you’ll find yourself playing around with that aspect of the game alone and still having a blast. 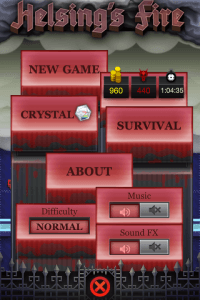 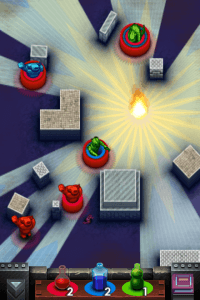 Another thing that really sets Helsing’s Fire apart from other games on the legendary App Store is the fact that it’s overflowing with charm and wit. The game features a uniquely dark sense of humor that’s right up there with the likes of Portal. Whenever a new type of enemy creature is introduced to the fray, or whenever you defeat a boss or reach a new area, there is a cutscene featuring this brilliantly done dialog. The humor is constant and never feels forced, which is just one more thing that adds to the huge appeal of Helsing’s Fire.

The gameplay of Helsing’s Fire, much like the rest of the game, is completely unique. It’s an interesting puzzle dynamic, wherein the player is required to destroy all enemies on the screen. To do this, you’ll position a torch somewhere on the map, lighting up the area. Any creatures that are for some reason not illuminated by that beam of light will not be harmed. To inflict your damage, you’ll position the torch and then use a tonic of a certain color (red, green, and blue are available at different points in the game). For example, a player might be tasked with lighting up 3 red werewolves with their torch and then using a red tonic, but must be sure not to hit the blue werewolf or he’ll only grow stronger. To make matters more difficult, you are only granted a limited number of tonics in each level, and there are also Fair Maidens on the map at times, who you certainly don’t want to kill (or you’ll fail the level). This gameplay dynamic is extremely unique and very well suited to the iPhone. To position your torches, simply drag your finger around the screen. Then, to use a tonic, click the icon representing the color of tonic you wish to use. 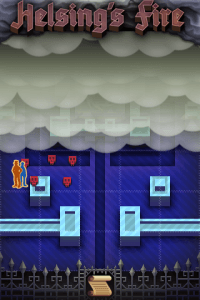 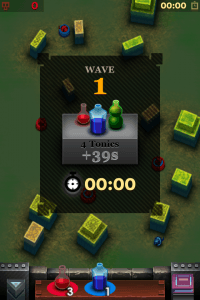 The game starts off fairly easy, and most players will be able to fly through the first few levels with ease. However, the difficulty quickly ramps up, and players will need to be highly analytical to successfully complete each level. Bosses require a great deal of strategy and quick thinking, and some of the later levels could easily be described as punishingly difficult.

Once a player beats the game, the fun doesn’t have to end. There’s also a terrific survival mode, wherein you’re tasked with destroying a never-ending onslaught of varying enemies.

Considering the simply breathtaking presentation, excellent humor, and fantastically unique puzzle dynamic, Helsing’s Fire is a true gem of the App Store and should not be missed. For the extremely low entry fee of 99 cents, anyone who enjoys gaming will find something to love here.

Dain Schroeder
My name is (as you can see) Dain Schroeder, and I am a 21-year-old computer science major with an AAS degree in computer networking. I have a passion for Apple computers and devices, and currently work for Staples as a computer repair technician.