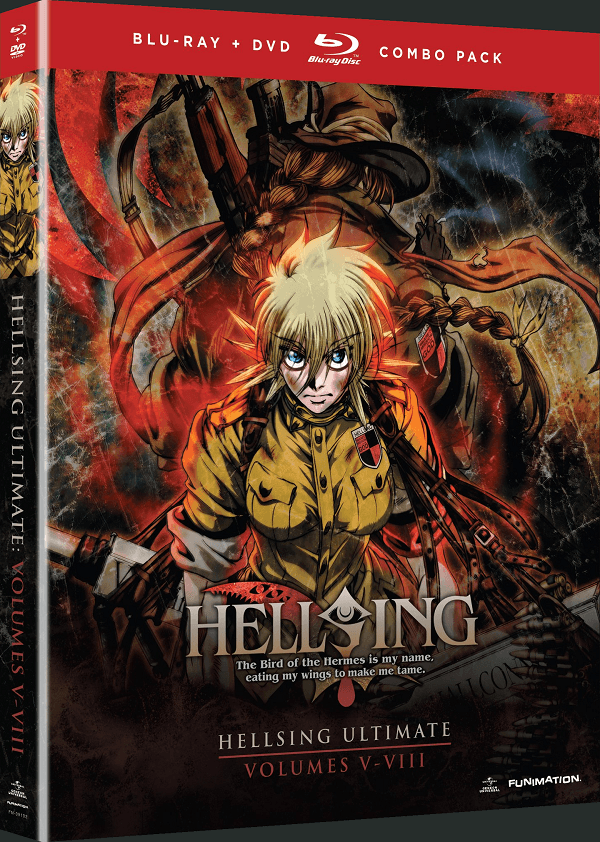 Overview:
Hellsing is a series that is well-known throughout the anime world and it’s re-make Hellsing Ultimate took the series to heights fans never could have dreamt of. However the series suffered some unfortunate release issues as the original licensor shut down, stalling the project. Thankfully the series was rescued by FUNimation who have since released the first four episodes of the series over the past few years and recently on Blu-ray, the review of which can be found here.

Now, over four years after the last release of Hellsing Ultimate, FUNimation has brought the next four episodes of the series over to North America. Does Hellsing Ultimate: Volumes V-VIII live up to the franchise’s name?

Story:
During the first four episodes of Hellsing Ultimate we were introduced to the Hellsing Organization including the powerful vampire Alucard and the freshly turned police girl named Seras Victoria. These two dealt with a number of vampire-related threats around the globe and even had to fight off a massive attack on their own stronghold. As the Hellsing organization discovers that these vampire attacks are more than just random occurrences they find that a threat from many years ago has returned in the form of Millennium and the Last Battalion of the Nazis. 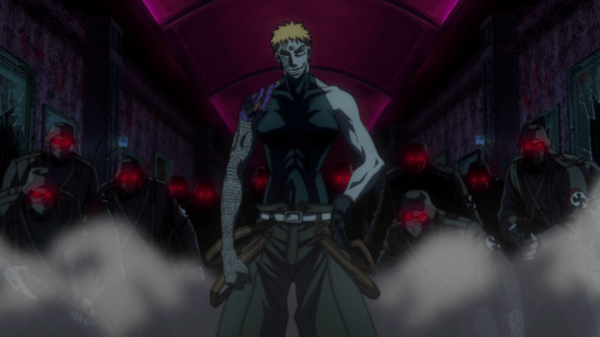 At the end of the last set Alucard was away from London as Millennium began moving towards London to burn it to the ground. As such this segment picks up with the Major and his Millennium forces arriving in the city of London. This seemingly unstoppable army of vampires backed by powerful military hardware begin tearing the city apart with explosions and mercilessly slaughtering anyone in their path, be it man, woman or child and reveling in the carnage and bloodshed.

With Alucard out of the picture, London seems to be at the mercy of these bloodthirsty creatures, but the Catholic Church and the Iscariot Organization have organized an army of their own to try and liberate London from these heathens. However the salvation these men of the cloth speak of may spell the doom of everyone left in London, be it vampire, ghoul or human. With the Hellsing Organization on the ropes, the Iscariot group’s own righteous slaughtering and Millennium burning the city to the ground and butchering the people of London, what will be the fate of the city and the Hellsing group? 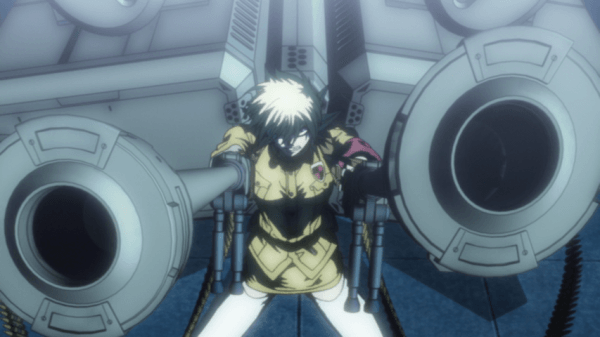 One thing that makes this second set arguably better than the first is the fact that Alucard is actually taken out of the picture for the first three episodes in this release. That means that viewers can’t expect his nearly endless power to dwarf those he fights against. Instead the focus is placed squarely on the rest of the cast as Seras, Victoria, the Wild Geese and even Alexander Anderson enter the fray and fight for their lives.

Hellsing Ultimate Volumes V-VIII may spend nearly all of its time in heavy combat, but that doesn’t mean that there isn’t plenty of drama and character development as well. During the brief pauses in the bloody combat both Seras and Pip receive some rather significant character development that was not only surprising but also highlights how great these characters can be once Alucard is out of the limelight. 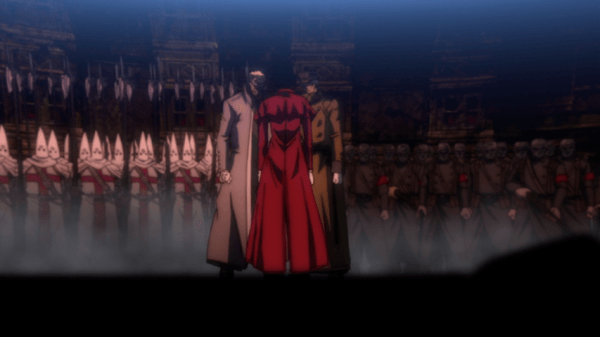 When Alucard does show up again, he quickly makes up for lost time by revealing his most insane ability yet, easily eclipsing the rest of the fighter’s in the series. However his abilities also turn out to reveal more about his character and reveal more a little more about his past. Outside of that, these four episodes of Hellsing Ultimate bring everything that was built up over the four episodes and creates probably the most intense and vicious combat sequences you will find in perhaps any anime with a few pauses in the action for some comedy and drama. 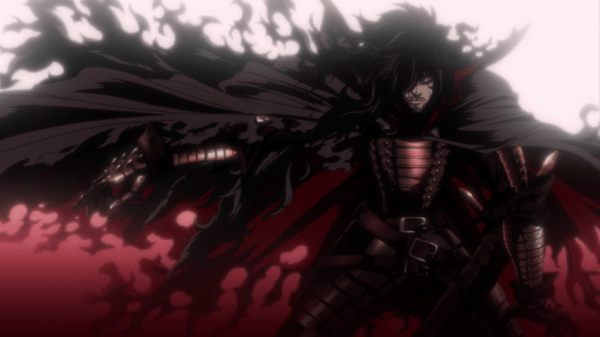 It is worth noting that this set does not mark the end of Hellsing Ultimate as there are still two OVA episodes left to be released and this set of episodes V-VIII leave off on a rather significant cliffhanger, making the wait for the final episodes all the harder. Also it is worth mentioning that while Hellsing Ultimate has been bloody in the past, this set is not for the faint of heart as a few trouble situations are displayed throughout these episodes.

Visuals:
Despite the fact that a three of the four OVAs were originally created back in ’08-’09 it is stunning how great the visuals in this release look. The entire series retains its dark setting as nearly all of the action occurs at night with the flames of burning buildings and bodies providing the brightest colors. The background art and the environment itself is impressively handled as well with plenty of attention to detail. 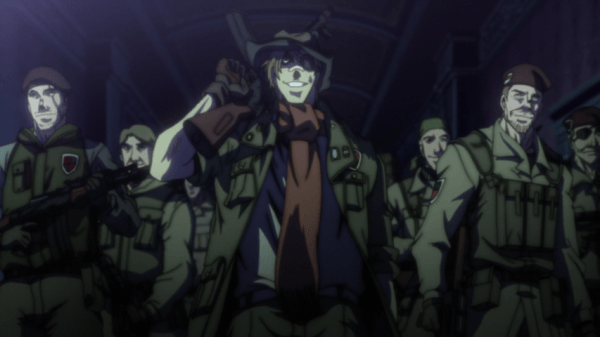 As for the character artwork and the combat quality, Hellsing Ultimate is just as impressive with V-VIII as before as the fighting is more viscous and blood soaked than ever before. In fact there are some scenes practically drenched with blood and gore as people are torn apart or shot to death so prepare for some very horrific scenes. Madhouse has included a lot of 3D models into a few of these episodes, especially in volume VIII and while it is quite obvious that these models appear different from the rest of the scenery, it doesn’t detract much from the overall presentation of the scene.

Audio:
Considering the fact that it has been four years since the last episode of Hellsing Ultimate was released it is extremely impressive that FUNimation managed to track down the same English voice cast that provided voices throughout the first four volumes and the original anime series. This means that we have the same impressive European and British accented voice actors and actresses that fans remember and each one of them hasn’t lost a step over the years as their performances are excellent. 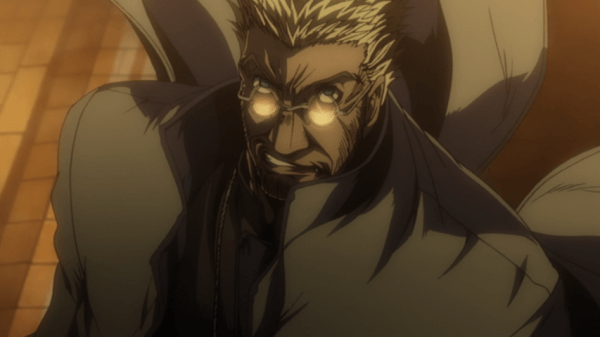 These four volumes contain some decent basic background music, but these tracks are put to shame whenever a number of the inserted songs begin to play. Now unfortunately I wasn’t able to track down the name of these songs, but these inserted songs made the scene they were accompanying hit all the harder.

Extras:
With this release FUNimation has provided a few of their standard extras such as trailers for other shows, the US trailer for this release and a textless version of each closing song but they have also provided a large number of special features that actually last longer than the anime itself in this release. 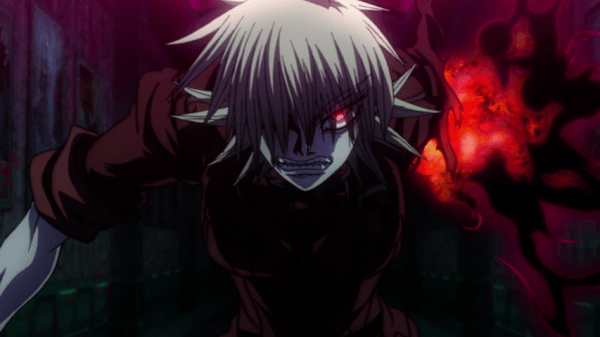 First the company has provided an episode commentary for each volume in this release and each commentary is hosted by Taliesin Jaffe the voice director. Episode V’s commentary features Gildart Jackson who is the voice actor for Millennium’s leader Montana Max, Episode VII features Yuri Lowenthal as Pip Bernadotte the leader of the Wild Geese. As for the second set of commentaries we have VII with Rachel Robinson who handles the voice of Zorin Blitz and VIII includes Crispin Freeman the voice of Alucard. Each of these commentaries last the full forty-five minutes and they include varying levels of details about the show and what the crew has been doing over the years.

Besides this there are a number of video bonuses as well in the form of a special called Participating in a Legend: Dubbing Hellsing – The 10th Year Anniversary which is split into two forty-five minute parts, a section where fan questions are answered and a Hellsing Ultimate Round Table Discussion that features most of the main cast talking about various things. Each of these feature videos of the actual cast members talking and answering the questions asked of them. 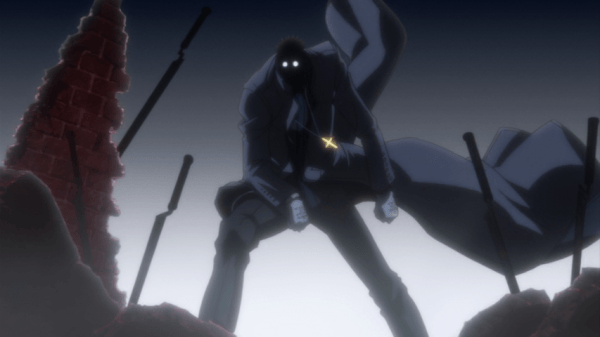 To round out these special features we have an anime panel that was held at Anime Vegas 2010 which is an hour long recording from the show and the first episode of Hellsing: The Dawn. Unfortunately Hellsing: The Dawn has only been given subtitles so it is still in Japanese, but it lasts for nine minutes and is something of a prequel to the events of Hellsing Ultimate as it takes place during WWII.

Overall:
Hellsing Ultimate: Volumes V-VIII capitalizes on the build-up of the first four episodes of the series by throwing the viewer immediately into the bloodiest action of the entire season. In fact, this set makes Hellsing Ultimate the bloodiest show I’ve ever seen and it is bloody wonderful. Not only is the level of action provided throughout V-VIII taken to new heights but it is portrayed gorgeously as well. With only two episodes left and a hefty cliffhanger, viewers should relish in the idea of being able to dive once more into the bloody world of Hellsing Ultimate.