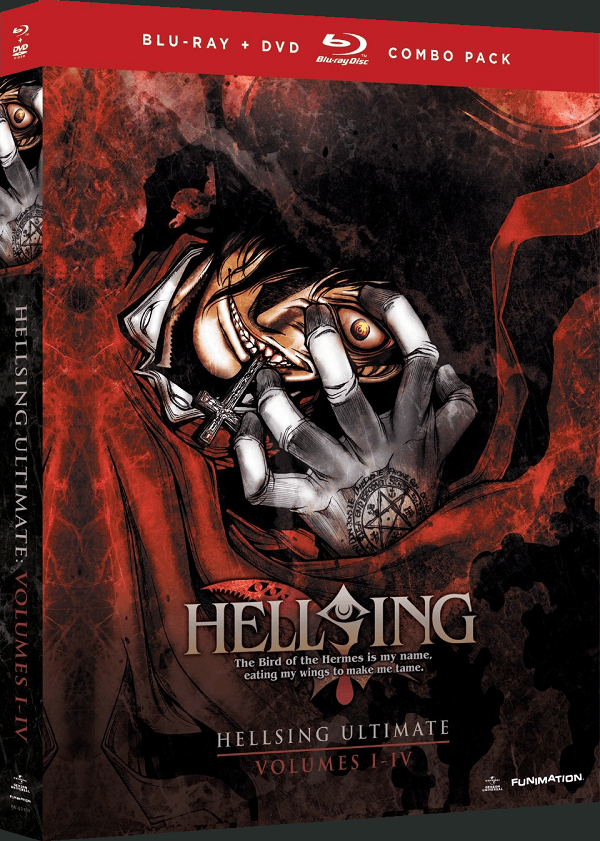 Overview:
Over the last few years the vampire mythos has become so watered down that not only were there a few Western movies and television series focusing on romance and drama, but even a number of anime series simply saw vampires as a plot device. However there is one anime series which saw vampires as powerfully deadly creatures of the night capable of grotesque super human abilities.

Story:
In the world of Hellsing Ultimate, normal people believe that vampires are simply myth or creatures used for scary movies. The only reason they can get away with thinking this is because there is an organization of people who work every day to destroy the horrible creatures which lurk within the darkness. That organization is the Hellsing Organization which is headed up by Integra Hellsing and her special weapon, a vampire by the name of Alucard. 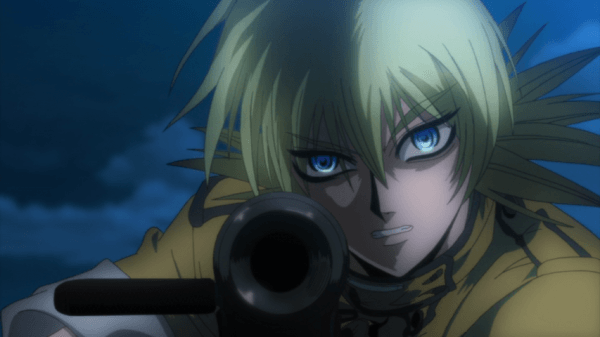 However, a police woman by the name of Seras Victoria has no knowledge of this dark side of the world and she simply was sent on a mission with some fellow police officers to investigate a disturbance. Unfortunately for her and her partners, the reason for the disturbance was a vampire had killed everyone in the building and turned them into mindless blood thirsty ghouls. When her partners are killed and Seras is about to be tortured and eaten, Alucard appears to introduce her to a world unlike anything she has ever known. She just has to die first.

As Seras joins the ranks of the Hellsing Organization, the first volume is mostly spent showing her new vampire powers as well as just how unstoppable Alucard can be when put up against a difficult opponent. However with a sudden rise in vampire and ghoul attacks throughout England and other parts of Europe, Seras, Alucard and the other members of Hellsing quickly realize that a force far more sinister than the vampires pulling the strings. When the origins of this group are revealed, it may turn into a blood bath that will drag the whole world into a never ending war. Can the Hellsing group put a stop to it? But what else could they be unleashing by doing so?

Considering the fact that Hellsing Ultimate is an OVA series, the story moves along at a rather brisk pace with only a little bit of downtime in the series’ action driven storytelling for levity and conversations. That being said, there are still a few comedic moments throughout Hellsing Ultimate, though these focus heavily on Seras and her reactions to the strange things in her new world but Alucard himself also looks for fun in his own way. By killing everything in his way as brutally as possible. As such, the story is very dark in nature and many of the characters in this series are absolutely insane so prepare for plenty of over-the-top moments. 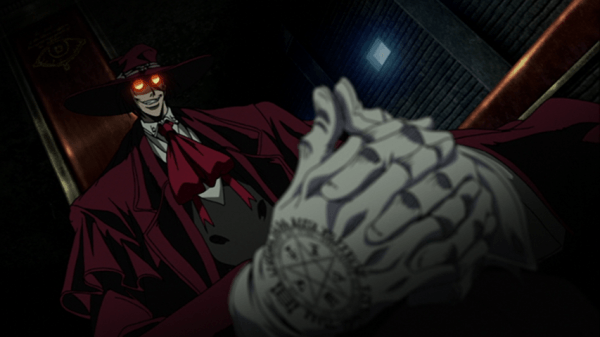 Hellsing Ultimate’s story is at its best when the action is at a fever pitch, with Alucard fighting against another vampire or even a member of the church. Now the story does seem like a bunch of fights strung together by a rather simplistic plot and you would be partially correct in thinking so. However Hellsing Ultimate’s story is far from deep once the shadow faction is revealed and the fact that Alucard provides the badass vampire with seemingly unstoppable powers while Seras (Police Girl) fills the role of an inexperienced newcomer nicely.

This creates an interesting balance between the two main characters of the series, though it does seem that Alucard can be a bit too strong at times, making it so that his character never feels like it is in danger, which does lower the tension of his battles somewhat, though this loss is usually made-up with some brutal ability. 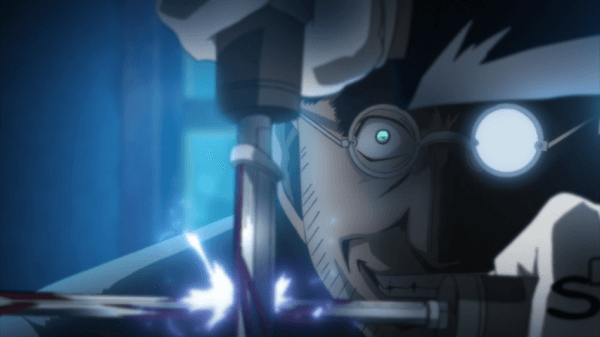 Now it is worth noting that this release is Hellsing Ultimate Volumes I-IV so only the first four episodes are included with this disc. As such, the story does end up on a cliffhanger, but one that fits well and leaves plenty of anticipation for the next release in the series.

Visuals:
One of the most noticeable things about this release of Hellsing Ultimate is how the Blu-ray version of the show has seen a rather nice jump in visual quality compared to the DVD versions of the show. This is a major plus for a show which can be absolutely grotesque at times with horrific action scenes containing the stuff of nightmares. The art style of Hellsing Ultimate is gorgeous and it’s animation is wonderfully executed, which is exemplified by how expressive the characters’ faces are throughout these episodes. 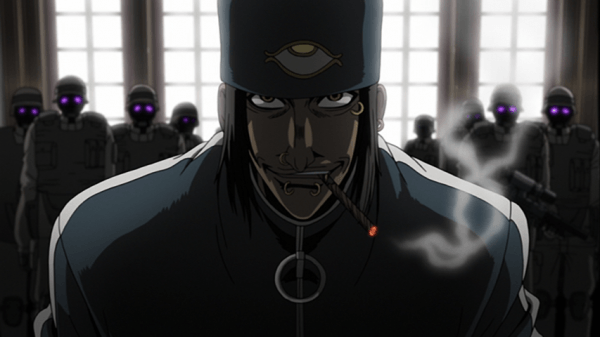 The same can be said for most of the action scenes found within the first four episodes of Hellsing Ultimate contained in this release.  A consistently high level of animation quality provides satisfying combat with over the top powers that truly make Alucard and the creatures he faces off against seem like something supernatural. It is worth noting that the show isn’t for someone who minds a lot of blood and gore because Hellsing Ultimate contains plenty of it, with it all portrayed quite brutally.

Audio:
Fans of the older Hellsing series will be glad to hear that Hellsing Ultimate’s English dub is absolutely wonderful. While the Japanese voice track is there for those who want it, any viewer choosing to do so would be doing themselves a great disservice. It is worth noting that the cast for this dub is the original one that handled the Geneon release back in ’07, but that is for the best as not only are their various European sounding accents a joy to hear, their tones match the characters personalities and actions perfectly, especially when the crazier characters begin to appear. 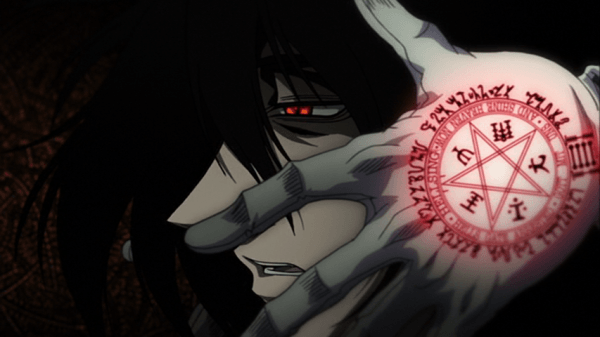 While the voice work may be top notch, ultimately the series’ background music is rather mundane most of the time, only standing out in certain scenes, such as in Volume IV, which is a shame considering how over the top and action packed Hellsing Ultimate can get. More often than not, the background music simply is there, and then forgotten. That being said, the series does feature some rather stunning ending theme songs, with each episode featuring a different classical sounding song.

Extras:
FUNimation’s release of Hellsing Ultimate I-IV is absolutely jam packed with extra features, so many that they have been spread across both episode containing discs as well as a full disc of bonus features.  In fact, not only does every episode in this release have a commentary, but there are a large number of lengthy video interviews with the English voice cast where they discuss practically everything there is to discuss about their workings with the series so far. 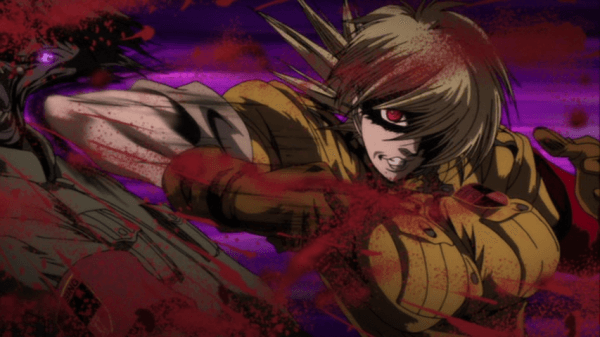 Outside of that there is also footage of the cast’s AX 2007 panel as well as footage of the Hellsing Ultimate booth that was set up during the event, clean versions of each of the ending songs and a large number of promo videos. In fact, the length of all this bonus content is actually longer than the episodes provided in this release.

Overall:
Hellsing Ultimate: Volumes I-IV provides everything a fan of the series could possibly want. Not only is the original English voice cast still present in this release, but the action scenes provided in these four episodes are top notch. With a dark storyline that leaves viewers on a rather high point in the story, a stellar art style and plenty of extra content, this release will see new fans joining the ranks of the Hellsing family, eager to see how bloody and insane the next fight in the series will be and just how dark this series will turn in the next release.