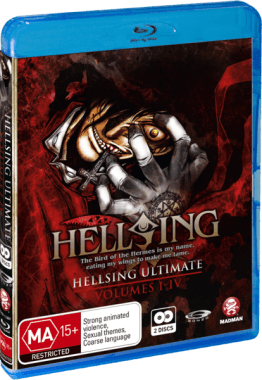 Hellsing is an anime series about all things supernatural. Vampire lords, crazily religious regenerators, zombies, ghouls and every other many of nasty creature that goes bump in the night. Based on the widely popular Manga series of the same title, Hellsing has seen two different anime incarnations in recent years: The original anime run by the same name, and the later OVA collection labelled as ‘Hellsing Ultimate’ (similar to Full Metal Alchemist and FMA: Brotherhood.) Amongst fans, Hellsing Ultimate is still widely regarded to be the superior of the two incarnations. Featuring the first four fifty-minute length OVA’s of the series, Hellsing Ultimate Collection 1 offers itself as the perfect introductory collection to the series. If you think that the good and terrifying name of vampires have been desecrated in recent memory by a book and movie franchise that shall remain nameless *coughtwlightcough*, then Hellsing Ultimate promises to restore that faith. 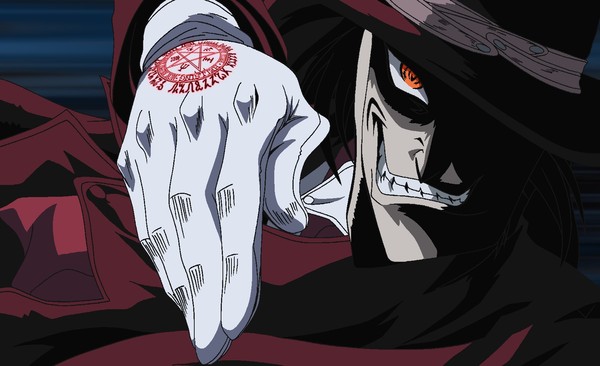 The plot of Hellsing Ultimate is set in a universe where monsters run rampant throughout the world, and a mysterious organisation manipulating is powers beyond the average man’s mortal understanding. The only organisation that can keep this madness in check is the order of Protestant Knights, Hellsing, and their secret weapon: a vampire named Alucard.

From the very first episode, viewers will see that Alucard is not your average bloodsucker. Unlike many of his kin, he willingly follows the orders of humans, and protects them rather than hunt them. He drinks donated blood out of blood packs and doesn’t take pleasure in killing humans. (Well, okay, that’s not technically true. He very clearly enjoys his job when it involves killing of non-innocents.) He is also absurdly powerful gun-wielding hunter whose mentality borders on madness. Honour bound to the Hellsing organisation, Alucard travels the world taking care of any problems of a supernatural nature as their number one field agent. 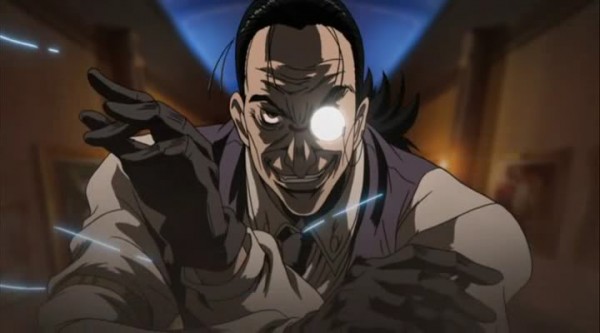 We are later introduced to a number of other key players within the organisation, including Hellsing’s leader, an ex-vampire hunter turned housekeeper, a former policewoman turned vampire fledgling and a French gun-for-hire who runs support for the rest of the group. However, it is revealed that Hellsing are not the only organisation using super powered individuals to their advantage. The Catholic Church and their Iscariot organisation also have their own secret weapons, chief among them Father Anderson, a warrior priest with supernatural powers, and Alucard’s main rival of the series. With the relationship between the two groups strenuous at best, a sudden surge in supernatural incidents and crimes leads them to uncover a sinister plot by another particularly famous historical regime that would see the world plunged into chaos.

The collection takes on a violently unique look at both supernatural legend, and the belief systems of several dominant religious organisations. The series isn’t afraid to challenge the notion of classic good vs. evil, and is quite happy when it comes to venturing into religiously blasphemous territory. All four episodes feature numerous instances of pure, bloody mayhem. To the kind of fans who grin wildly at over-the-top moments of violence coupled with purely badass execution of said violence, then this is certainly a series for you. Hellsing does a great job at making this excessive level of violence just seem downright COOL. 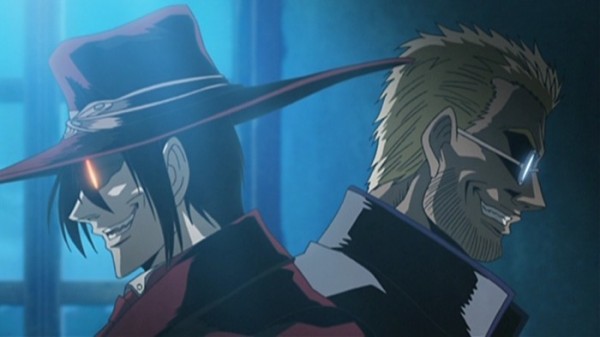 The namesake of the series ‘Hellsing’ is derived from the name of the founder of the Hellsing organisation, the famous vampire hunter who defeated Dracula in legend (or Alucard in this case.) Speaking of Alucard, he is easily one of the show’s selling points. He was voted Best Male Character for the Japanese Animation Awards in 2008, and watching this first collection, it’s pretty apparent why he’s so popular. His personality quite deep and complex, displaying a side that’s honourable, philosophical and well mannered, while at the same time sadistic, arrogant and violently gleeful. His abilities are powerful and unique, but not without limitations, and the execution of his job he performs with a just the right mix of satisfaction, joy and madness.

Hellsing Ultimate has really come far in terms of its graphic evolution from the original Hellsing anime release. The character detailing is a significant improvement over the original with much better defined colours, outlines and animation flows. Environments are highlighted as dark and edgy with stark colours to help differentiate the significant colours and styles of the foreground. The visual quality of the Blu-Ray release even improves over the original with a sharper and clearer picture quality that really makes the visual stand out, especially the special effects. The entirety of the collection invokes a mood of darkness, best expressed through the abundance of long and over-cast shadows in environments and more often than not having said shadows juxtaposed by pools of recently split blood. 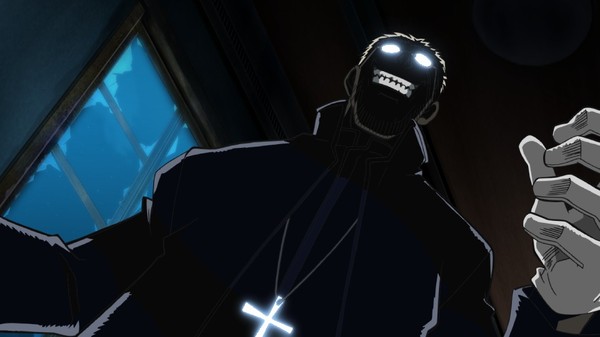 Character designs are animated particularly well too, with many of the lead cast featuring distinctive looks and features. Up-close shots really make an effort to accentuate facial expressions to convey emotion on the parts of the characters. Most often this is evident in Alucard’s mad grins, the monstrous teeth of vampire feasting scenes and in the fear in the faces of those to be feasted upon. Alucard’s predominantly red attire truly stands out in a dark and gritty sort of fashion, whereas other characters like the light hearted Seras portray a brighter and more wacky visual style that compliments her role as comedic relief in the series.

A tip for parents, you REALLY want to check the OLFC rating on this one, because when the rating says “Strong Violence”, don’t take it as a suggestion. It genuinely means it. Hellsing Ultimate is one bloody piece of entertainment. The level of violence is not what you call realistic, but this works to the shows favour. Over the top violence works well when it does not invoke realism to the extent that it makes the audience nauseous or queasy. The typical violent scene, probably best accentuated in episode 2 involve cuts, gashes and explosions that reduce many to clouds and pools of red, but no exposure to ultra realistic elements like bones and torn flesh. 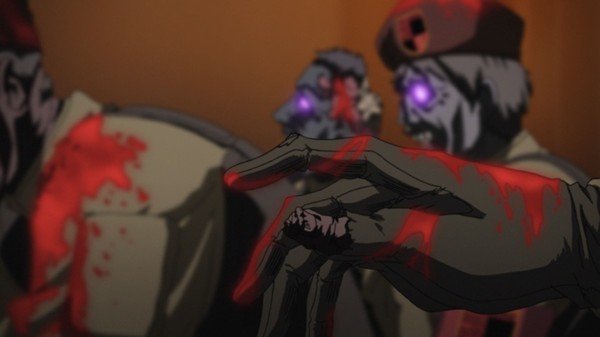 It must be said straight off the bat that Crispin Freeman’s voice work as Alucard is nothing short of spectacular. The characterisation of this sadistic, bloodthirsty protagonist in voice alone is intimidating. As the lead character, his voice carries traces of the similar theme of madness and mayhem held throughout whilst still retaining quite a lot of sophistication and charm. As a whole, performances like this are why SUB fans are missing out. The rest of the cast are also very well adapted into English, with the exception of a few odd lines that are more likely than not a simple case of poor translation.

The musical quality is also quite good, though nothing that will blow the minds of the viewers. The music often has a dark swing put on the events of the plot, which work in tandem with the shadowy visuals quite well. Vocal tracks are often well implemented to compliment the religious undertone of many of the action scenes, particularly the ones that occur involving Iscariot and situations of divinity. Alucard’s own theme is a well-paced, sophisticated sounding Jazz piece which belies his sadistic and violent side. The track still compliments his character very well based on his characterisation as the series protagonist. The main theme of the collection is an interesting similar sounding jazz piece with a spooky vocal undertone, providing a fantastic atmosphere of foreboding violence, which is sure to ensue. 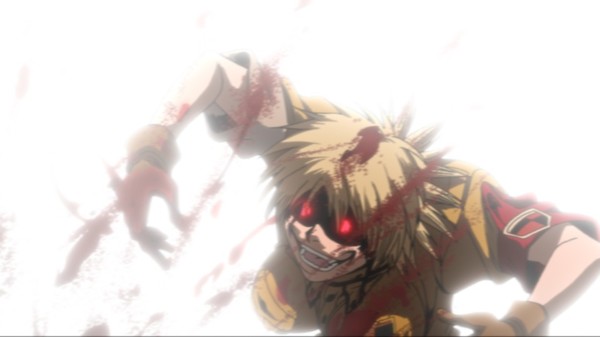 Hellsing Ultimate boasts quite the extras package in the Blu-ray release. Special features include many of your standard Madman release pieces, like promotional trailers, Japanese commercials and extensive commentaries by the English dub cast. However, this collection also contains a number of other surprisingly entertaining bonus features. Chief among them is a karaoke version of the Major’s speech from Episode four. Having this villainous rant played for us in song is pure delight, even if a bit oddly uncomfortable considering the subject matter of the lyrics. The extra section also features a recorded panel event from Anime Expo 2007, where the English voice cast addressed fan questions and performed their VA duties in signing and stopping for photographs. The extra section also includes a Geneon Booth section which takes viewers on something of a virtual tour of the Hellsing mansion, explaining its history and significance to the story. 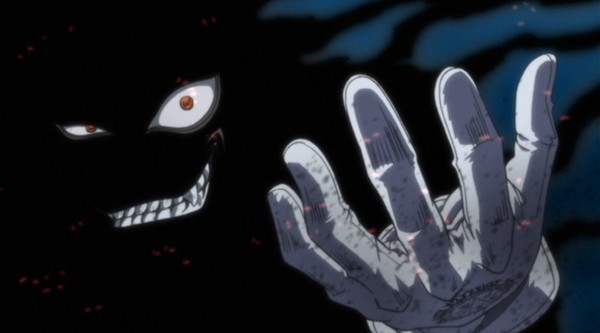 Hellsing Ultimate is undoubtedly a series that appeals to a certain kind of anime fan. The series as a whole is a complete rollercoaster of madness and mayhem. The kind that where you can’t help but laugh maniacally when you see the lead character tear down scores of pitiful resistance. The comedy to action to drama ratio is very well balanced in this series. Sometimes it will make you gasp. Other times it will make you chuckle. But most of the time it will make you grin and laugh with Alucard-esque fervour. The series is undoubtedly enjoyable, and it will make you feel just the tiniest bit disturbed and guilty for thinking so. A thoroughly entertaining descent into madness and violence as a whole, Hellsing Ultimate is definitely one collection that you should check out and bring out a little of that inner insanity.

Hell on Earth has arrived. And his name is Alucard.