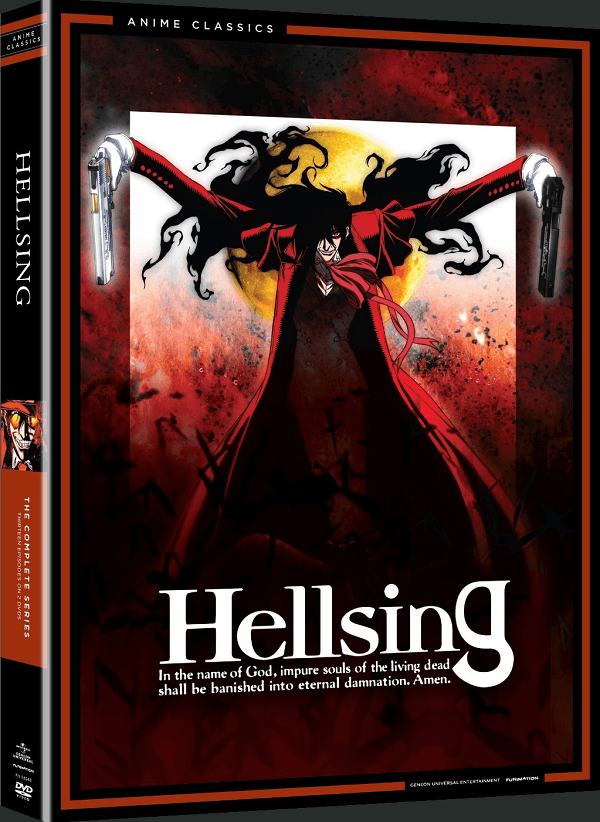 Overview:
Hellsing has gotten a similar treatment to Fullmetal Alchemist in that the original anime release of both occurred during the run of the manga and therefore differed from the manga itself.  They both also saw a second series, each with an additional word title, Ultimate and Brotherhood respectively, that followed the plot of the manga more closely.  Because of this, both original series live in a kind of limbo parallel to the manga and redone anime.  In light of this, the re-release of Hellsing as an anime classic a little more than a decade after its original gives the opportunity to look back at the original attempt and how it stacks up today. 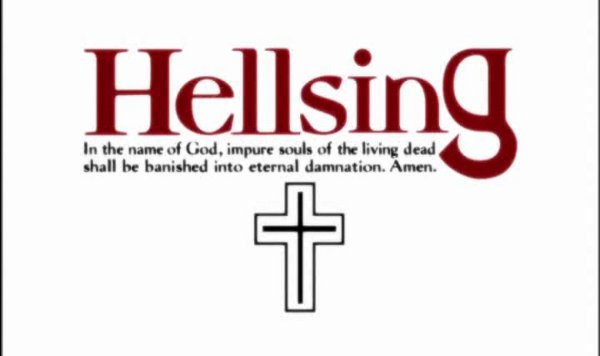 Story:
Hellsing is not necessarily a “who” in this story, but a “what”.  An organization dedicated to killing all undead, such as vampires and ghouls, to protect the United Kingdom and the Queen that was founded by the Hellsing family that still heads it.  So, while there is a person named Hellsing, they are by no means the main character though by any means a minor one either.  Looking for an actual main character for this series comes down to two, both incidentally being of the living dead the Hellsing Organization is so adamant about killing, though working for them.

Alucard, or Arucard as his is called in the Japanese and listed in the credits, is one of the most powerful vampires in existence to the point of being a completely unfair opponent compared to those he has to fight.  As awesome and bad ass as he is that doesn’t leave much in terms of stakes early on, but luckily that is where the other main character comes in.  Seras Victoria is a newly turned vampire floundering in what to do with her new unlife, hesitant to take lives and refusing to drink blood makes her a more easily relatable as a character.  Considerably weaker, she is also more likely to garner the viewers concern than a certain seemingly invincible character.  While the story isn’t directly focused on just these two characters, they are pretty much the only two always doing something.  Others stand around giving orders early on, but eventually get to prove why they’re in charge. 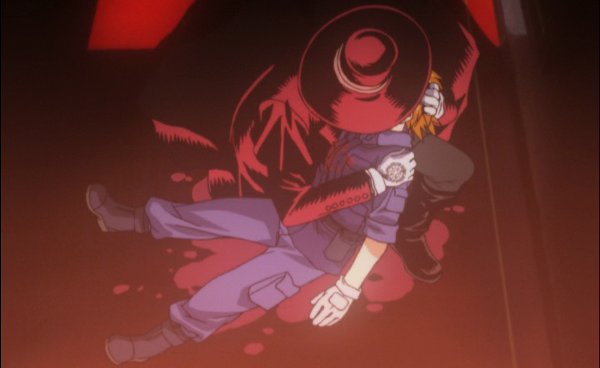 The story itself doesn’t quite focus on vampires as contemporary understand sees them, instead the Hellsing Organization is contending with technology induced vampires that they refer to as Freaks to differentiate them from the likes of real vampires, like Alucard and Seras.  One of the problems of the series though is that for a 13 episode series it has a real problem with resolution.  Early on they are simply reacting to these Freaks popping up, but the plot of finding out who is making them and why, never gets any closure to the point that those unfamiliar with the series may even take Hellsing Ultimate to be a sequel series only to find a different version of the story.  While the story that is present is good, that failing is a little disheartening as 13 episodes building up to ambiguity on such big questions.

Visuals:
Being made back in 2001, it is expected that the quality may not be up to what it is today, but finding it fullscreen came as a very big surprise when so used to almost everything being widescreen now.  The look of the show is still good, if a little flat though it does fit the overall style presented.  For the most part the use of color is very skewed to the more black and red, which makes the offset of the bright blue of specific characters’ eyes and other colors a great contrast when they come up, though with the level of blood and gore lots of red is expected.  The previews for the coming episode breaks the mold a bit though and features a more comical artistic approach that adds a bit more fun into the series so focused on fighting the undead. 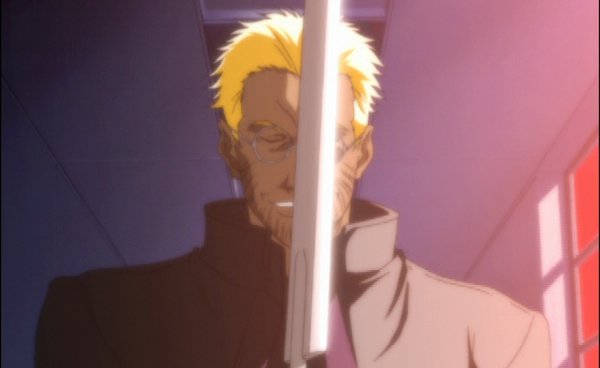 Characters are designed well for the series, with a good variety of outfits for the main characters instead of being stuck in the same outfit throughout the series.  Alucard’s style is pretty hard to match by any of the other characters though, with his red duster or many of the other outfits he ends up in.  The greatest diversity in look comes from Seras though, while mainly in her uniform she does go back to civilian garb pretty often and each time it is different and interesting, though she does tend to wear a lot of mini-skirts.

Audio:
The music of Hellsing is not what one might expect from just looking at the series or hearing what it is about as the series does actually use a decent amount of more rock and jazzy music as well as the strings and tones related to the more suspenseful and horror like parts of the show.  The opening theme “Cool – The World without Logos” by Yasushi Ishii serves as a good song to fit the stylistic cool that fits Alucard throughout the series, as he doesn’t really sweat anything instead doing things for the enjoyment of it.  The closing theme “Shine” by Mr. Big was actually a number one hit at the time in Japan and fits more as a good theme for Seras as relating more to her new life as a vampire and wanting to do well.  The voice acting maintains the level expected of an anime, even one from a decade ago.  The English dub goes the small extra bit to give the characters a British accent for most of the characters, but the Japanese voice actors though do tend to give a bit of a better performance. 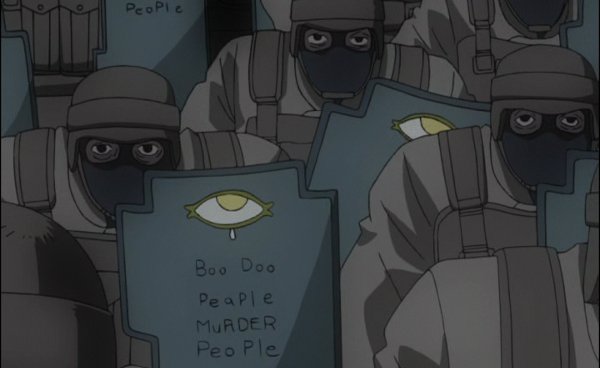 Extras:
The extras a somewhat limited, but at least offer more than trailers and textless opening and closings.  Other extras include a Staff Interview about the original making of the series by Gonzo, giving insight into everything from character designs, to the music, to digital photography at an pretty early stage of development.  Also included are the original commercials, though some are actually for the original soundtrack and not the anime itself and watching them back to back makes one a little sick of the work Pioneer.  An interesting aspect of the textless opening and closings for the series was the fact that there are 3 versions of the closing that can be viewed, though the only difference comes down to just the final few seconds of each.  Finishing up the extras are some trailers in the form of two trailers for Hellsing and a selection of FUNimation releases. 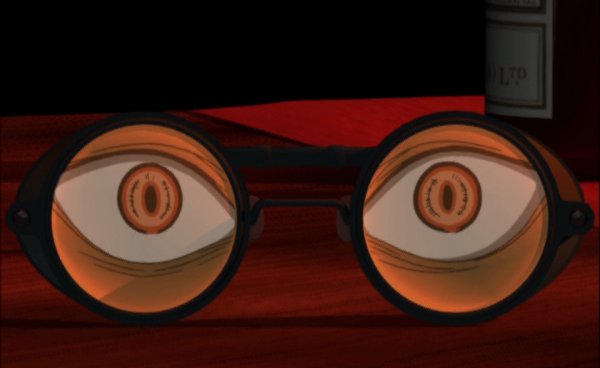 Overall:
While probably seen as a great series in its first run, Hellsing does suffer a few problems in the form of dangling plot and lackluster visuals by today’s standards.  For the most part the content that is present is a good watch, this is probably best left for fans of the series that didn’t pick it up before.  New viewers may find themselves let down by the lack of finality and either passing up Hellsing Ultimate or looking to it for answers, neither of which being satisfying for those posed in Hellsing.  I give Hellsing Complete Series Anime Classics