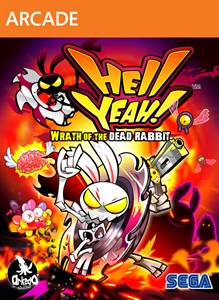 Overview:
Hell seems like a pretty common place to let players go crazy and just lay into enemies, even better about it is that it can be made to look like pretty much anything the makers of a game want it to look like.  As big or small as it needs to be to fit the story, gameplay, and tone, Hell Yeah! boosts to have 10 massive areas of Hell to explore and defeat the 100 strongest monsters that happen to standing in the way.  While that sounds like a pretty fun time, it comes down to how well it is executed as in the ends that what separates different classes of games.  So, does this one have what it takes to be a good one? 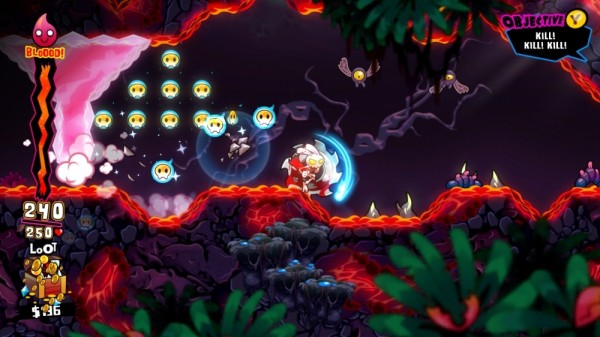 Story:
Hell Yeah! Wrath of the Dead Rabbit is the story of Ash, the current ruler of Hell, as he tries to prove that he isn’t a weak coward after a bit of a photograph snafu.  Of course, when the ruler of Hell needs to prove how badass they are, the only real way is to knock around a few of the stronger monsters across ten very different realms of Hell.  No need to feel too bad though, as when in Hell, death is apparently nothing more than a change of scenery.  For the most part however the story of Hell Yeah! is little more than a excuse for going around the different places, as the quest to recover said photos is simply mentioned a few times throughout the game, usually around bosses.  But, with games like this the main focus isn’t exactly the main event and as weak as it is as a story, the developers still seem to have a little fun with it. 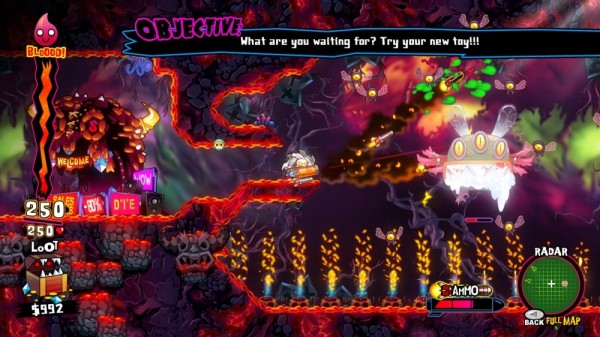 Gameplay:
The vast majority of the game is spent with Ash in a tricked out drill-like wheel strapped with plenty of guns as he moves around 10 pretty big maps.  Attacking comes in the form of either drilling through enemies or blowing them away, depending mostly on their defenses and how close players are willing to get to them.  As the major component of the game, it is pretty fun as Ash jumps around and unloads into pretty much everything.  When he first gets the wheel he can grind through some materials blocking some paths, but not all of them, giving the game at least a bit of a Metroidvania element, but not too much.  While it would have been nice to see a little bit more of this, with some cooler rewards, as it is mostly part of the natural progression.  Natural progression is unfortunately fairly short after figuring out what to do, with only a few puzzle-ish monster bosses that could give a little trouble. 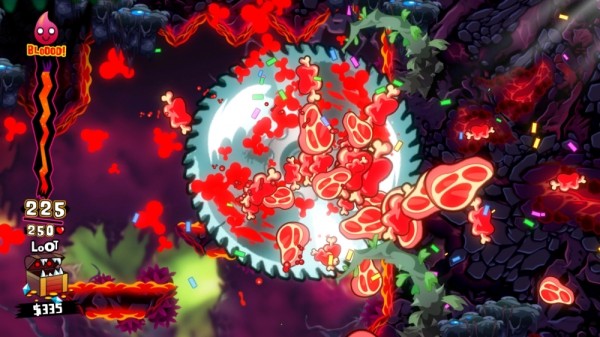 The wheel isn’t his only mode of transportation though as when he starts out, as well as a few other areas where his wheel isn’t allowed, he doesn’t even have that, instead hoofing it on foot completely defenseless.  These sections play completely differently, it isn’t possible to go toe-to-toe with even the smallest of enemies, making it more important to out think and out maneuver.  This adds a nice diversity to the game, making it important to think about how to go about defeating enemies when Ash can’t just empty all of his guns into them.  Despite how any boss is dispatched however, the only way to finish them off is through special little mini-games that require faster skills as the game goes on, failing these means the boss gets a second, or third or more, chance at life and costs Ash a bit of his own.  Success of course means a beautifully visceral death for the boss. 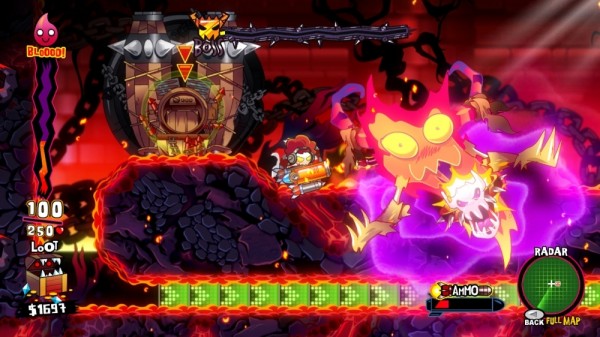 There are a few side things to do in the game, side missions to complete for a few customization options and “The Island”, a location where the killed monsters are sent to be put to work.  There are also special sections with the wheel that see Ash without his guns and performing stunts, instead of killing enemies, while this does occur minimally in gameplay, it is more of a part of the side missions.  The side aspects of Hell Yeah! are kind of a let down, most rewards are simply customization options that will probably only cater to completionists.  Even worse, some of the side missions are needlessly difficult, having to restart a mission because of failure is fine, but the fact that moving platforms and obstacles don’t reset to a preset position for each mission means that failure can be unavoidable creating needless frustration.  The Island has its own little issues, for the most part the progress there is slow and what it provides almost isn’t worth the time.  Perhaps if it gave more or faster it would be useful, but unless the game is being played over the course of a great many days The Island almost isn’t worth the time.

Visuals and Audio:
The visual style of Hell Yeah! is bright and colorful, much more than one might in Hell, but there is a great variety of environments from the expected fiery molten lava of a volcano, to the less expected clean marble interior of a casino, to the very bright and shifting nature close to a psychedelic trip.  The styles of customization include anything and everything, so that Ash can look something that anyone will enjoy, while the wheel itself has a few interesting skins that all look good from plain blade schemes indicating upgrades to pretty detailed with elephants. 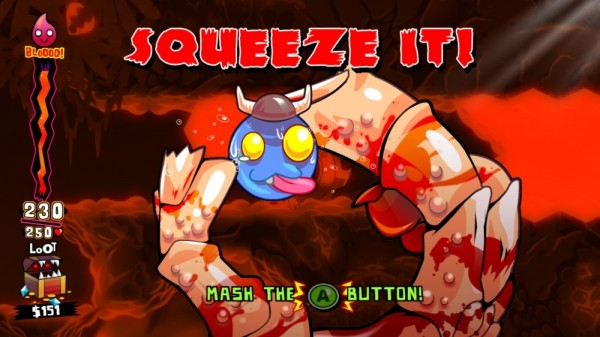 While the game doesn’t really have any voice acting there is still fun to be had with the audio.  Music is pretty interesting, though only really two songs stand out throughout the game, those being the ones with actual lyrics.  Very reminiscent of those fun songs in other games over the past few years, they are however integrated less effectively in the game as they act only as background music or over the credits.  Ash does make it a point of bring them up, as it annoys the hell out of him, but there might have been a somewhat better way to bring them together without just beating players over the head with it.  Regardless, the music does have a nice blend of silly and rock to fit the tone and subject matter effectively.

Overall:
Hell Yeah! Wrath of the Dead Rabbit is a fun little game that seems to be trying pretty hard to be more.  The gameplay is solid and fun, but after getting to know what is expected, blowing through the game after the last upgrade is pretty easy.  The additional features might have added some depth to the game, if they had been a bit more effective, but as they are they act as little more than a bit more play time after the game is done.  This isn’t a bad game by any means of the word, just not as much as one could possibly hope.  Fans of this type of game should enjoy it for what it is however, which is why I’m give Hell Yeah! a