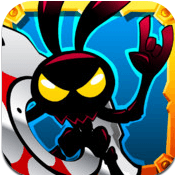 Hell Yeah! Pocket Inferno is a ribbon game mashed up with a shoot ‘em up based on the Hell Yeah! Wrath of the Dead Rabbit IP. The game is played with two buttons and offers 50 levels and countless of visual unlocks for the main character, Ash the Rabbit. 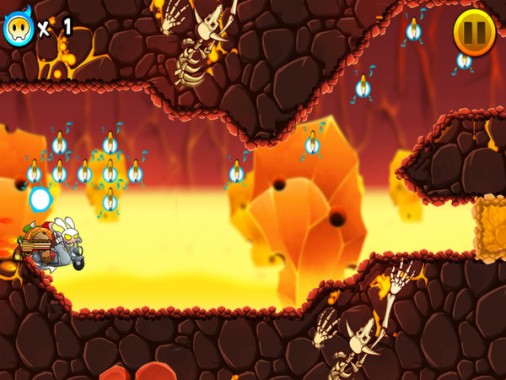 If you have not played Hell Yeah! Wrath of the Dead Rabbit, then the characters of Hell Yeah! Pocket Inferno will mean little to you. The game is very much a pick up and play type game that happens to share a familiar main character with the original game.

Hell Yeah! Pocket Inferno mashes together two genres into one game. The base premise of the game is the old ribbon type games. The one that features a non-descript ribbon in a cave travelling endlessly forward. Pressing a button will cause the ribbon to rise and letting go will allow the ribbon to fall. Crashing into something results in death. Ash and his hellish rocket bike behaves no differently. The added bonus comes with the gun that is attached to the bike. Pressing the right half of the screen cause Ash’s bike to slowly fire out bullets. Tapping the right side of the screen will cause the gun to fire per tap. This provides the player with a little more flexibility in dealing with obstacles, allowing Ash to shoot certain obstacles to unlock alternate paths or outright killing enemies. The controls are extremely simple and very workable. Rapidly tapping the screen allows the player to circumvent the firing rate cap temporarily. However this can get tiring rather quickly. With the terrible rate of fire in the early parts of the game, it is pretty much required to tap rapidly for a large part of the early game. I found this to become annoying after long stretches of playing. 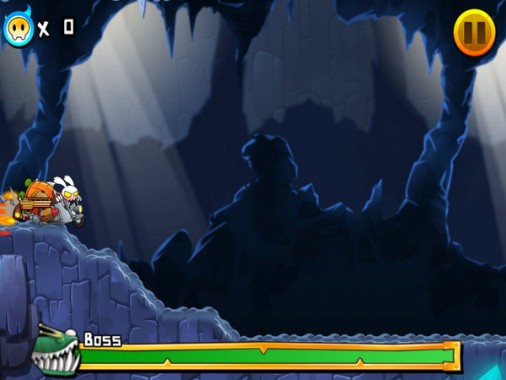 There is only one upgrade path in the game that affects Ash and the bike. The rest of the unlockables are purely cosmetic. I would have liked to see more unique upgrade options for the bike as most of the upgrades are extremely forgettable as they are either range or firing speed improvements. Because most of the purchasable items are cosmetic, there is very little pressure in the game to spend additional real life currency through the in-app purchases. 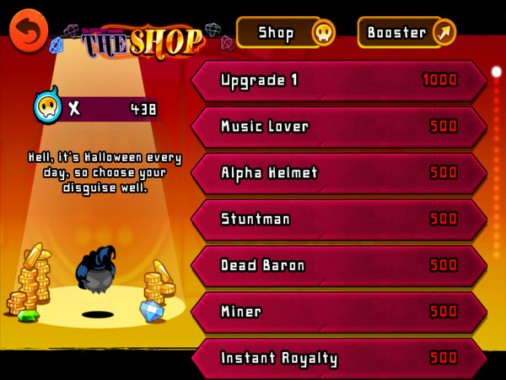 As the game progresses, new monsters and obstacles are introduced. Some obstacles require an upgraded rocket bike gun to conquer. Each level requires three goals to be accomplished for a full three star ranking. Some levels need to be replayed as it may not be possible to complete all three goals in one run or require a certain level of upgraded vehicle before all the goals can be accomplished. It is also completely possible to complete the first half of the game without collecting any stars. This does help to add a level of replayability to the game. Levels are short and sweet, making Hell Yeah! Pocket Inferno the perfect game to pick up during a coffee break or waiting in line for said coffee. 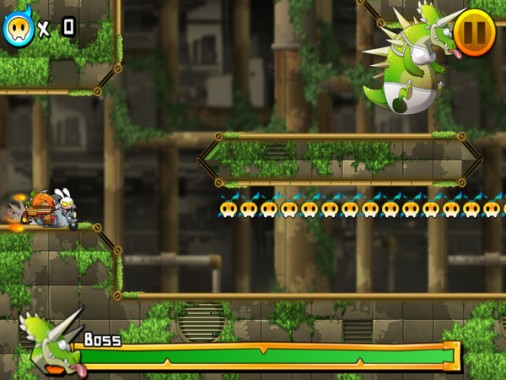 There are five unique worlds in the game. Each world starts a different boss that the player will fight against several times before the boss meets their hyper gory end. The visual style of Hell Yeah! Pocket Inferno is extremely cartoony in the Saturday Morning funnies. Although the controls are simple enough for a child to master, the cartoon content is more along the lines of The Itchy and Scratchy Show from The Simpsons than Hanna-Barbera which makes the game a bit inappropriate for younger children. The art stays true to Hell Yeah! Wrath of the Dead Rabbit 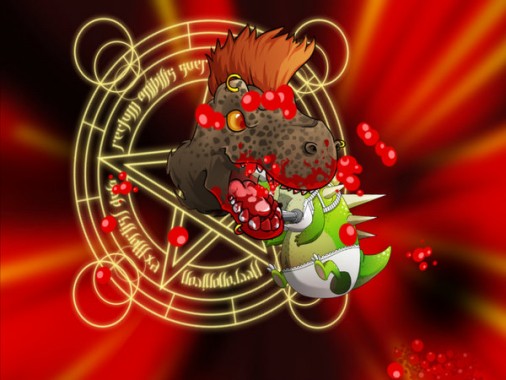 The sound effects are excellent in Hell Yeah! Pocket Inferno. Many sound effects brought fond memories of Super Mario on the Super Nintendo and N64. The music is pleasant to listen to, tending to merge with the background instead of stealing the show. An announcer yells something at the end of the level. I frankly still have zero idea what he is actually yelling. I think it is Ash to the rescue, but it feels more like the nonsensical English catch phrases yelled in poorly translated Japanese games.