Heist is an on-rails first-person shooter. You’ll be blasting your way through a bank, taking on guards and cops alike alongside your fellow felons. 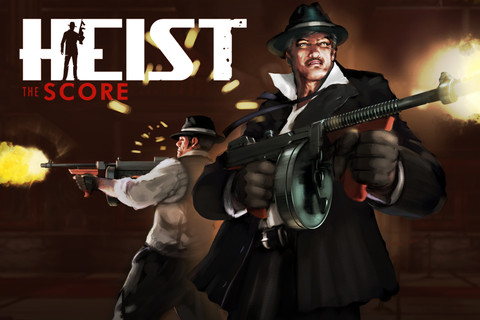 You’re a first-time bank robber on your first heist along with Joe, a loudmouth fellow hired gun, and Sal, your fearless leader. He doesn’t say much about the job itself, but the bank is a big one, and should hold plenty of cash for you to pilfer. Once you get in and start the job, however, there are way more guards than expected; maybe they’re guarding something more than money after all… 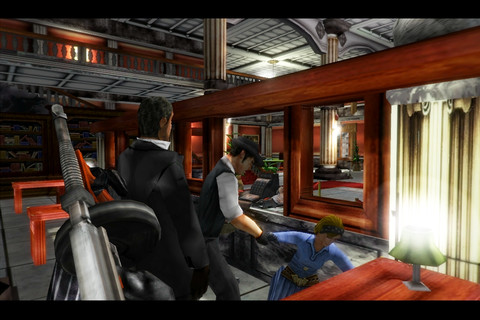 The story is told through brief cutscenes, fully voiced as well as subtitled, and does a good job of walking you through the numerous phases of the heist.

The story ends on a cliff-hanger, with questions unanswered, leaving it wide open for a sequel; which is good considering the playtime of this game is half an hour to an hour at best.

You start off going through a tutorial, which gives you the basics. You drag across the screen to look around, and touch the fire button on the bottom-right to fire your weapon. If the need arises, in certain positions you can move to an alternative spot, to dodge a thrown grenade or to get a better angle.

You can also switch weapons once you’ve picked up some, take cover behind pillars or tables, and shoot small gold crates to pick up extra ammo as you battle your way through the building. These aren’t made so obvious in the tutorial, though, and you’re left to figure them out for yourself. 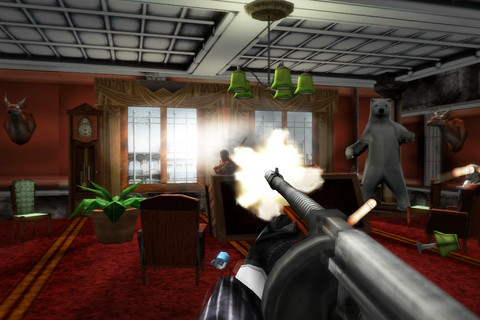 When you run out of ammo you’ll automatically reload, or you can take cover and tap the fire button to force reload. Beware, though; this won’t top up your ammo like most other shooters – it’ll drop whatever you had left and use a brand new magazine. So you’ll have to learn to not reload quite to aggressively if you want to have any ammo left.

The game plays smoothly enough, though I did encounter a bug leaving me “between” positions with nothing to shoot and nothing to do except reset the whole game (close the app completely and restart kind of reset, too). That only happened the once, but it can kill your enthusiasm somewhat if you have to restart the entire game because of a bug. 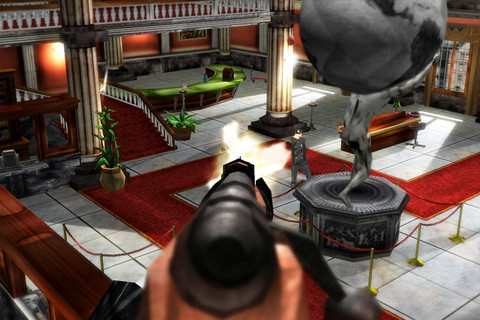 The aiming is fine for the most part. It’s a little slow for my liking, but the waves of enemies tend to line up in front of you, so you don’t usually have to look around all that much.

The guns feel distinct, with their own shooting pattern and kickback. With some, the shotgun for example, the kickback is so hefty it can get annoying to have to drag the view down again to re-aim, but that’s forgivable. All-in-all, the gameplay is enjoyable, though brief. If you like mobile shooters, then you’ll definitely get something out of this title.

Even though it’s not running the Unreal engine as far as I can see (the 3D engine of choice for 3D iOS games at the moment), the graphics are really nicely put together. The textures are detailed, and the models are decent all around. The animations are great across the board, and react nicely to the various positions and such. 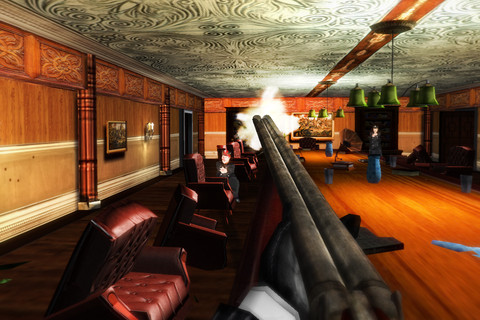 The voice work is solid, and gives you a good sense of the characters they portray in the cutscenes. A old-timey gramophone-style record is constantly playing in the background (even in the vault somehow), though it soon gets drowned out by gunfire, and so doesn’t get annoying.

Heist is a well put together title. With solid gameplay, decent writing, and good art direction, this game is well worth the price. It’s short length and little-to-no replayability are a little disappointing, but the content that is there is well made. And for the introductory price of $0.99, it’s a must buy for fans of the shooter genre.