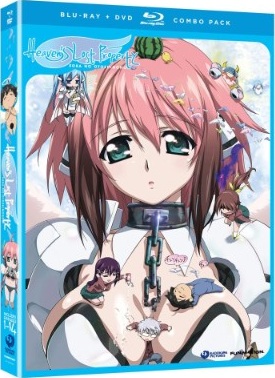 Overview:
Many anime have based themselves around an average high schooler who happens to either come across something mysterious or have an unknown power about themselves unlocked. While some of these anime usually involve a magical world being revealed, others introduce winged humanlike creatures with strange abilities to steer the main character’s peaceful life right off of a cliff.

Sora no Otoshimono, or as the English localization from FUNimation is called, Heaven’s Lost Property began as a manga in Japan back in May 2007 and is still being published monthly to this day by its author Suu Minazuki. The series was then given its first anime adaptation by AIC and was aired in the Fall season of 2009 with 13 episodes and an OVA released almost a year later. Now, FUNimation has brought us the entirety of the first season Heaven’s Lost Property, should the series be accepted with open arms?

Story:
Tomoki Sakurai is a relatively average young man who just happens to have a very active libido, making him quite the pervert. But beyond his perverted thoughts, he believes in the motto that “Peace and quiet is the best” and tries to live his life relatively simply despite having a childhood friend named Sohara Mitsuki with a karate chop viscous enough to break a wall. Despite his motto for peace and quiet, one thing has been bothering him lately and these are mysterious dreams involving an angel he does not know speaking to him. 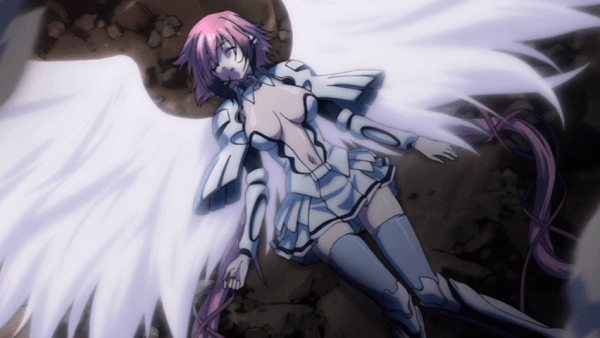 Attempting to find the reason for the consistent repeating dream he meets with Eishrio Sugata a strange man who is obsessed with a black spot circling the world which he believes is the “New World.” Along with this strange man he also meets a sadistic Mikako Satsukitane… the president of the Student Council.  After learning about the black spot Sugata tells Tomoki to investigate a certain field one night and there his life changes forever when a black hole opens in the sky and a mysterious being crashes into the earth from it.

The strange creature turns out to actually be a woman with angel wings on her back. She introduces herself to Tomoki as Pet Class Angeloid type Alpha Ikaros and she is now willing to do anything that her master Tomoki tells her to do. With the people around him already being strange, what more harm could a winged girl from the sky do?

The story of Heaven’s Lost Property revolves around the life of this young man Tomoki as he tries to live a rather normal life alongside the Angeloid Ikaros. The mystery behind who Ikaros is, what she is and why she was sent to him all drive the story forward but rather than be story focused, Heaven’s Lost Property quickly switches into comedy mode with plenty of ecchi fan service goodness. 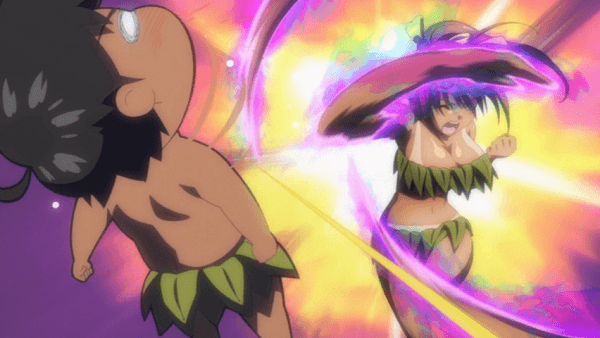 Now before Ikaros even enters into his life, Tomoki had quite a perverted mind but now that he has an Angeloid who can fly at super speed, contains amazing technology and is super strong his perverseness reaches another level altogether. Becoming invisible to spy on his childhood friend changing and groping her, causing hundreds of pairs of panties to fly around like a flock of birds and even turn into a girl himself to sneak into the women’s locker room or bath are just a few examples of the lengths of Tomoki’s perverted nature. In fact, Heaven’s Lost Property is full of various fan service moments and some of it is quite obviously fan service for the sake of fan service, but in the end, the show never actually tries to hide its true nature.

While the show is indeed full of ecchi things and plenty of fan service, there is no outright nudity nor does it distract from what the show is truly about. From the moment Ikaros is introduced to Tomoki’s life she begins to grow as a character. In fact, the story introduces Ikaros as a blank slate which is then developed through various actions and situations throughout the rest of the series in perhaps one of the best character developing journeys you could ask for.

When she is first introduced to us, she knows nothing about the world around her or who she even is besides that she must always protect and stay by her master (as well as caring  for a watermelon) . Then, although the story takes more random twists and turns and plenty of moments where you’ll wonder what the world is going on, there is always development occurring in the background for each of the characters, especially for Ikaros and even for the later introduced Angeloid Nymph. 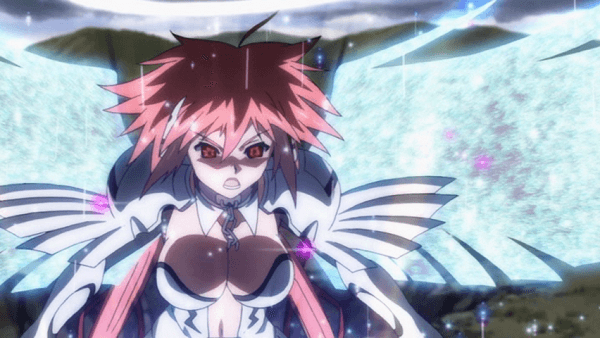 Heaven’s Lost Property may seem like one of the last places to look for an endearing story but those who judge a book by its cover will always miss out on a great story and once you start watching you cannot help but become attached to the characters and their interactions with one another. Just one question remains however, why would a pet-class Angeloid have so much power?

Visuals:
One of the hardest things an anime can try and do is deal with a character that has practically zero emotional range. With Ikaros’ very limited emotions the series actually does an amazing job of providing subtle nuances in her character to let you know how she is reacting to various occurrences around her. This is usually done through subtle animations in her ears. These little touches extend to the rest of the series where the animation quality displays rather consistent levels of quality. 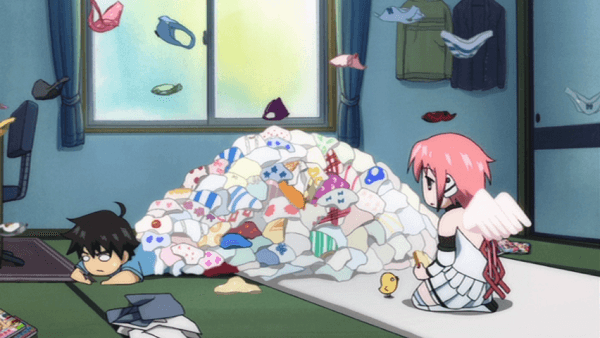 There are a few moments in the show that the characters will be drawn in chibi-like style with very little detail, usually whenever the character is stunned by the occurrences around them, or in Tomoki’s case whenever he isn’t being serious. While Tomoki may spend a lot of his time in chibi-form, the series does have rather well detailed characters, and as I said before, this is especially true to the Angeloids. Now being that the series doesn’t focus around a lot of action, the high quality that is displayed in the way the characters’ attacks are portrayed puts other action oriented anime to shame. As a whole the animation is truly a treat for the eyes, and no I’m not just talking about all of the fan service either.

Audio:
As standard with FUNimation’s releases, Heaven’s Lost Property contains both the Japanese and English voice tracks so the viewer can choose whichever preference they prefer but the obvious highlight here is the portrayal of the characters by the English cast. Brittney Karbowski provides an excellent job handling the rather emotionless voice of Ikaros, and bravo for the inserted song performance by Karbowski as well, while Kara Edwards provides a suitable fit for Nymph’s personality. The only complaint I have about the way the characters were performed was with Greg Ayres performance of Tomoki, as it made the character seem too whiny at times, even when the situation is serious. 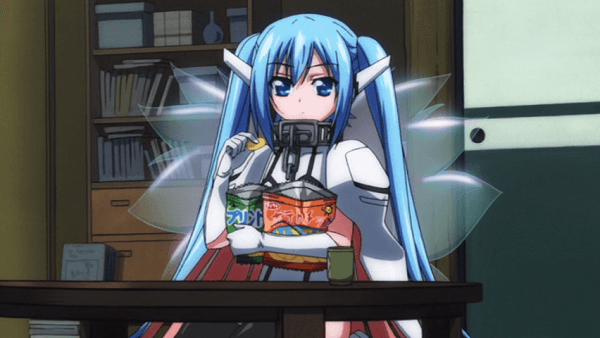 The opening song for Heaven’s Lost Property is “Ring My Bell” by Blue Drops and is enjoyable to listen to as a whole, and I found myself listening to it quite often whenever starting a new episode. Those who pay attention to the opening may also notice slight differences near the end of the series as extra sound effects are mixed into the song. Now the actual highlight of the music in this anime is all of the ending songs.

Rather than use just a single ending song and animation each episode of Heaven’s Lost Property will have a different ending song. Now these ending songs will usually always be visually set to something that occurred during that episode and the songs themselves range from okay to excellent in quality. This is quite a treat as a whole however as each song is fully subbed in English so the viewer will never be left in the dark about what is being sung.

Extras:
The first two discs of Heaven’s Lost Property contain only the 14 total episodes of the series while a third disc holds all of the extras. The extras on the third disc include your standard FUNimation inclusion of past and future release trailers but also clean versions of the opening and endings. When I say endings I do mean all of them. Each ending song in the series has been given a clean creditless version of the ending for the viewer’s enjoyment. The first episode’s ending and the thirteenth’s are the same so those are not doubled up. 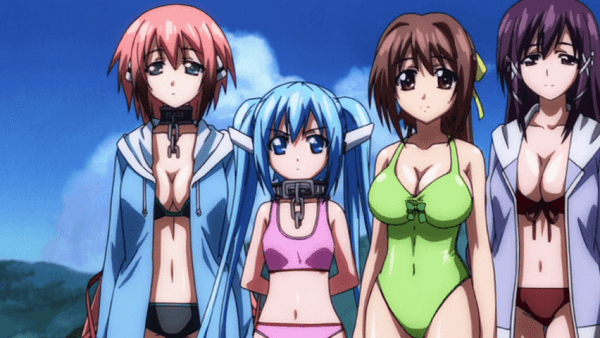 Those who want the series to come in a collectible hard art box can do so by purchasing the Limited Edition version of the anime for an extra $5 here, but I was unable to review this art box’s quality at this time.

Overall:
Who would think that an anime full of fan service could be so interesting? should be the question ringing through many viewers minds as they watch each episode of Heaven’s Lost Property unfold throughout this first season collection. There are plenty of laughs to be had and more than enough comedy to keep people watching and of course tons of fan service if that is more your thing. Even with all of the fan service the shining star in Heaven’s Lost Property is the character development. While some people may not enjoy seeing so much fan service, they will be missing out on a great anime that takes its comedy and fan service to another level and still shines through with an amazing plot and lovable characters.