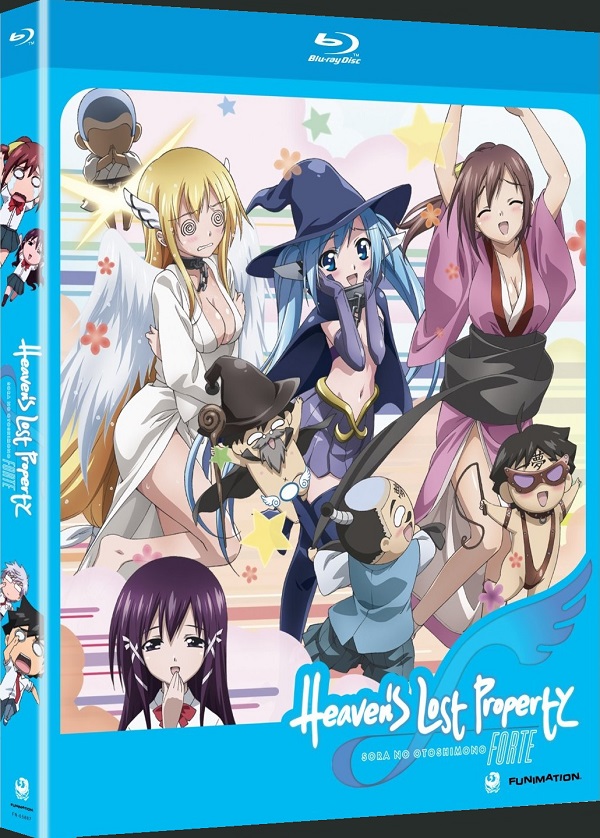 Overview
When it comes to anime releases, Western companies such as FUNimation have to abide by various terms that they have agreed to with the Japanese publisher of an anime. As such, every so often an anime is given only a DVD release while Blu-rays of a series have already been readily available in Japan. This is due to the aforementioned deal where Japanese companies fear reverse importation. Now over a year after the DVD release of Heaven’s Lost Property: Forte, the Blu-ray version of the series has been released. The question is, should fans have waited or was the aforementioned DVD release good enough?

Story
Tomoki Sakurai may have wanted to live a peaceful life, spending his days thinking of perverted things, harassing all of the girls in his school and getting karate chopped to death by his childhood friend Sohara Mitsuki, but that all changed in the first season of Heaven’s Lost Property. A mysterious winged girl named Ikaros crashed down to Earth and began calling Tomoki her master. 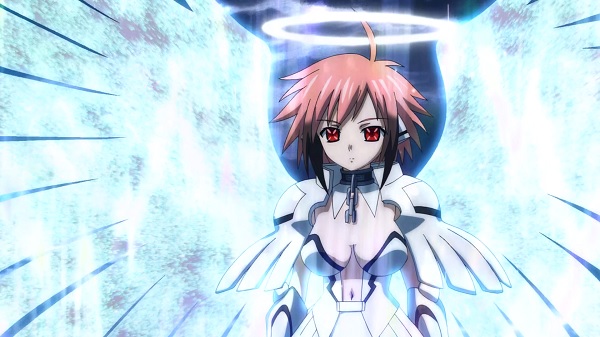 Ikaros revealed herself to be a “pet-class” Angeloid and could grant any wish her master wanted. With Tomoki’s perverted mind this led to many instances him of spying on girls, stealing their panties and even becoming a girl himself to peep without restraint.

When we last saw Tomoki and his “friends” at the New World Discovery Club had just saved Nymph’s life from the evil and mysterious man of the Synapse. With this threat gone and Nymph free to live her life as she please, it seemed like Tomoki’s days may just become peaceful once again… that is until the blonde bombshell Angeloid type Delta, also known as Astraea, is sent to kill Tomoki and prevent the humans from learning more about the Synapse through his dreams. 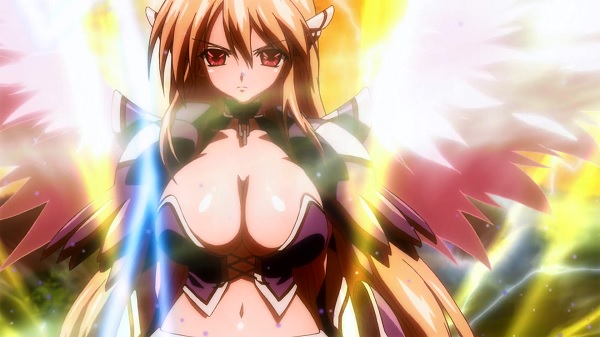 However there is one small problem with Astraea… unlike the emotionless but well-meaning Ikaros and intelligent Nymph, Astraea is a complete idiot that is incapable of even finding food, let alone killing Tomoki. While the main story for Heaven’s Lost Property: Forte follows the storyline of the first season very closely, one of the main highlights of the series is Astraea’s stupidity and inability to take care of herself makes her the butt of most of the jokes this season.

Besides that we see plenty of perverted humor and plenty of strange moments as entire episodes are devoted to off-the-wall events that the whole cast takes part in no matter how nonsensical it is. A fishing contest where you must catch girls with the biggest breasts? A snow war referencing Sengoku period warfare? How about a wrestling match with a grope-happy masked wrestler? 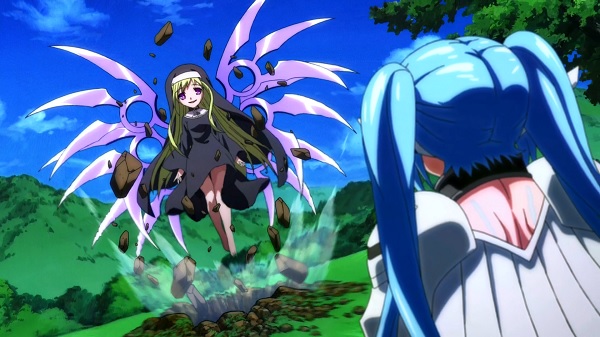 All of these things may seem strange and out of place, but with Heaven’s Lost Property: Forte each occurrence flows fluidly alongside serious plot development and drama. For with Astraea’s failure to slay Tomoki… the man of the Synpase has unleashed a new, insane Angeloid that dwarfs past Angeloids in power and she has set her sights on killing Tomoki and defeating Ikaros.

Now while Heaven’s Lost Property: Forte may be a comedic powerhouse, there are still elements of romance as this is indeed a harem comedy. In the previous season the aspect of Tomoki’s feelings for Ikaros and Nymph was barely explored, though it was hinted at. In this Forte however this is expanded upon as Nymph grows more as a character after being freed from her previous master. Astraea also receives quite a bit of development as she starts to question her own purpose, though she still continues to serve as a walking fan-service punch-line. 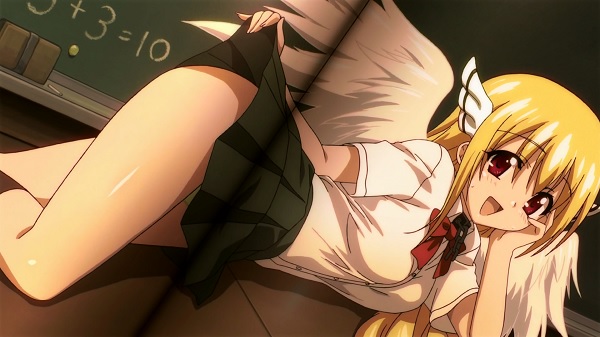 Although the ending events deviate from the source material in regards to a number of closing events, it is worth noting that a third anime season of Heaven’s Lost Property has been announced and this means that the build-up of events and the debut of Chaos in season 2 all will lead into further events in the third season, giving fans something to look forward to. Plus with the Angeloid of Clockwork movie already available for purchase, Heaven’s Lost Property fans will not be left wanting for content.

Visuals
Heaven’s Lost Property: Forte is a feast for the eyes in more ways than one. Sure there is plenty of fan-service that litters the show as most of the female cast possesses breasts that range from large to unbelievably large, but that service never actually reaches the point of nudity.  As far as the character designs themselves are concerned, all of the characters are well detailed and feature a wide arrange of costumes that are changed regularly. 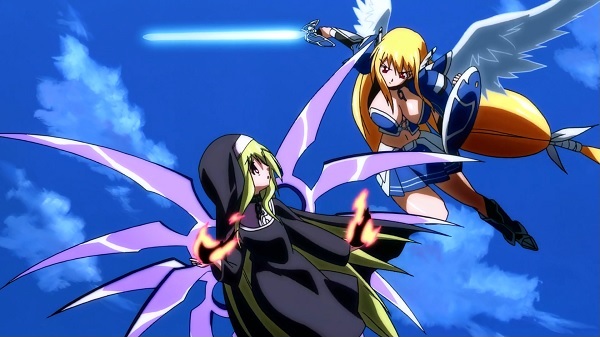 The anime does take pride in its chibi format however, as the characters will quickly shift to chibi form when something comedic happens on screen. In fact, Tomoki often remains in chibi-style throughout most episodes which is a bit of a detriment as it begins to wear thing towards the end of the series. Thankfully it seems that all of the extra effort that was saved by the chibi artwork has been transitioned to the fight scenes as Forte features fluid and fast paced combat featuring plenty of explosions and intense action as the Angeloids battle with one another.

Being the Blu-ray release of the series, the brightly colored animation and characters of Heaven’s Lost Property: Forte are quite a sight to behold as the anime practically glows in Blu-ray format. It is worth noting that there is no additional nudity or any extra fan-service that was withheld for this release, as everything is still kept to panty shots, bikinis and groping which is rather tame.

Audio
As per usual with a FUNimation anime release, Forte possesses both the original Japanese dub as well as an English dub for those who don’t want to read subtitles. As one may expect, the Japanese voice work is superb. On the other hand, so is the English dub. In my previous review for the first season of Heaven’s Lost Property I took issue with Greg Ayres portrayal of Tomoki. 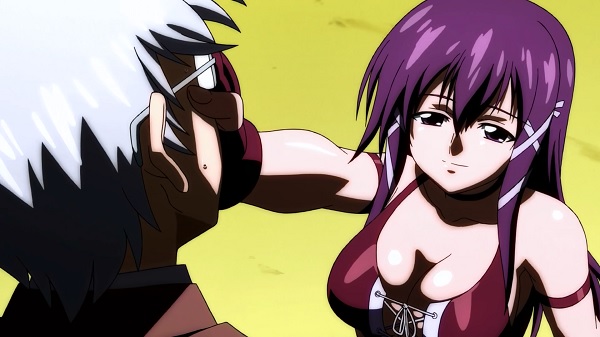 In Forte Greg offers a much better performance as Tomoki and it feels like he has truly captured the character properly this time, making him sound less whiny than in the first season. Another performance worth mentioning is Carli Mosier’s portrayal of Astraea. As mentioned before, one of the highlights of Forte is Astraea’s idiocy and Carli provides an excellent voice for her as a character.

Those who appreciate Japanese music will be pleased to know that rather than take the standard route of having only one opening and one ending song, Heaven’s Lost Property: Forte actually features a different ending song for every episode. These songs usually are related to whatever the plot was for that episode and range in quality from being excellent to bad. There are also two opening songs, with one comedic opening and a main opening song “Haato no Kakuritsu” which is performed by Blue Drops.

Extras
Before I get into the bonus features, it is worth noting that this Blu-ray release of the series does not feature any special added content at all compared to the DVD release. While the clean theme songs are now presented in Blu-ray quality, the lack of any extra content is disappointing. 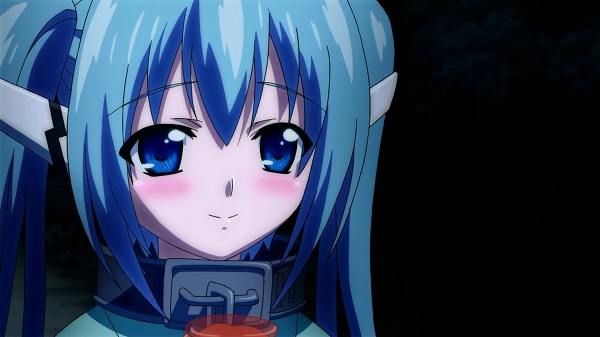 As mentioned before, Heaven’s Lost Property: Forte features a different ending song for eleven of the twelve episodes that make up the series. To top it off, it also has two opening songs, though the one is only used once throughout the series. The best part of all of these different openings and endings is that FUNimation has included a clean version of all of them for the viewer’s pleasure.

Alongside the multitude of clean songs there are trailers for past and upcoming FUNimation releases as well as the trailer for, Heaven’s Lost Property: Forte and the first season. Closing out the extras we have two commentary tracks, one for episode 04 and one for episode 09.

The audio commentary for Episode 04 features Christopher Bevins, voice director, Greg Ayers, voice of Tomoki, Trina Nishimura who handles the voice for Sohara and Jamie Marchi, the voice of Mikako sitting in. This audio commentary is very funny and will provide plenty of laughs as the crew spends most of the commentary commenting on the episode and their roles. 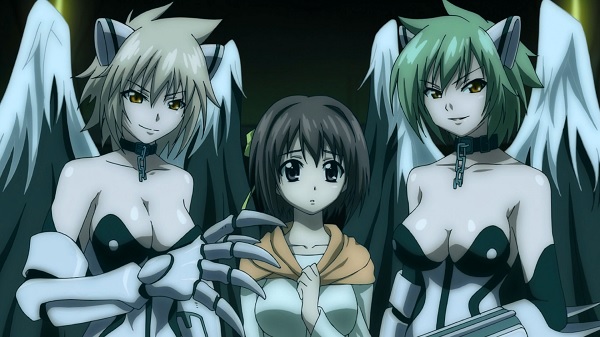 Overall
It has been an extremely long wait for those Heaven’s Lost Property fans who have been waiting for the Blu-ray release of Forte. So long in fact that we’ve seen the release of the series’ Angeloid of Clockwork movie on Blu-ray before Forte’s release. Despite the wait however, the series remains the same hilarious harem comedy ranging from simple lewd situations and actions, slapstick comedy and complicated jokes that make sure that there is something for everyone. Even with plenty of comedy ad more breasts and panty shots than you can shake a stick at, there lies an interesting storyline that continues to develop throughout season two and will eventually lead into the a third season.