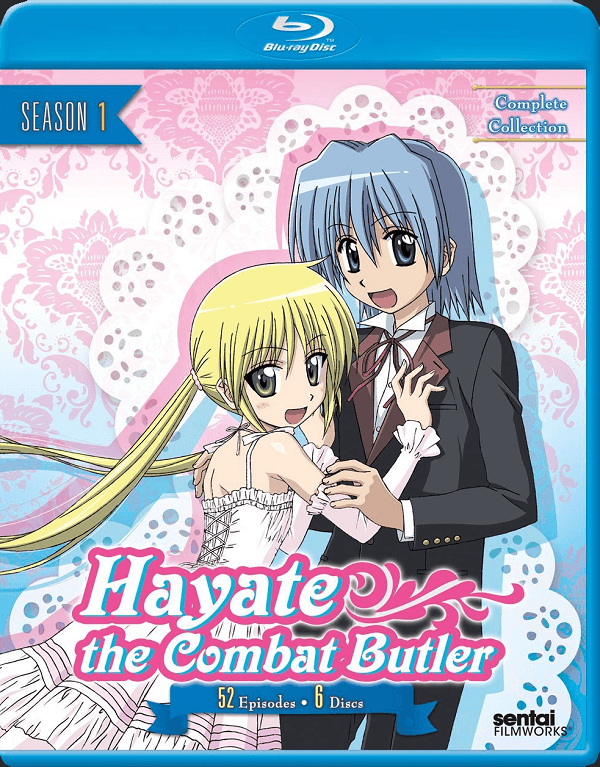 Overview
There are very few comedy series that have had the longevity that the Hayate the Combat Butler series has had since it started back in 2004. Since its creation the manga series has had numerous anime adaptations throughout the years, though some of the more recent series weren’t quite as well received, the first and longest running season was out of reach for fans in the West for quite some time. Thankfully Sentai Filmworks has brought out the entire fifty-two episode first season out on Blu-ray for the first time in the West. With the original series still going strong, does this first season from 2007 still worthwhile today?

Story
Hayate Ayasaki has lived a terribly unlucky life. Ever since he was young he has had to struggle to the point that even when dreaming of Santa he is insulted by saying that he never is given any presents because his family is poor. Due to his parents being completely irresponsible and gambling away every yen earned, Hayate began faking his age to work various jobs throughout school, only to end up having his parents waste his hard earned money. 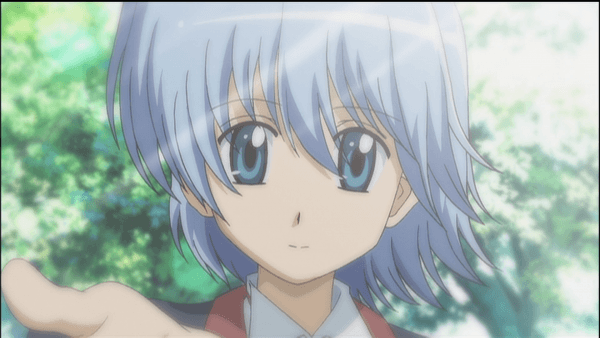 Despite these hardships, Hayate has always tried to remain positive but one Christmas day his parents finally take the final step. They abandon Hayate and leave him with a massive 156,804,000 yen debt to the Yakuza who are all the willing to simply take his organs and sell them on the black market to get their money back. Finally pushed to the point of no return, Hayate’s strict moral compass collapses when a seemingly perfect opportunity falls into his lap in the form of a naïve young girl named Nagi Sanzenin.

Through Hayate’s bumbling words and Nagi’s fantasies, a great miscommunication takes place and this is only exasperated when Hayate ends up rescuing her from a group of kidnappers who stole her away before he could kidnap her. By proving just how durable he is by chasing down a speeding car on the back of a bicycle and even surviving being hit by the same car, Nagi offers him the job of being her new butler/bodyguard. 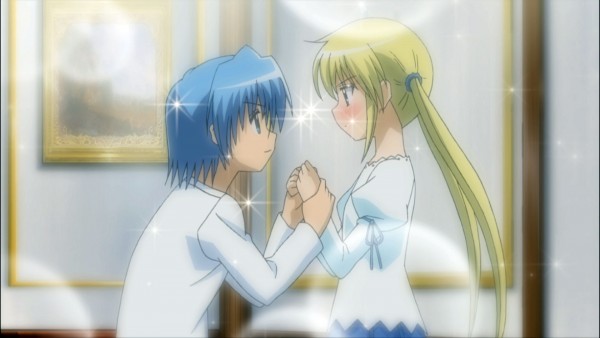 The only problem is, Nagi’s ridiculously extravagant lifestyle is far more than anything Hayate could imagine and with so many oddballs surrounding her life, Hayate is in for an absolutely crazy time. Of course, with the constant miscommunication of romance between Hayate for Nagi and the one-sided nature of this misunderstanding, things such as crazy robots, talking white tigers, hikikomori life styles, battles for inheritance, and even crazier situations are just the tip of the iceberg.

There is a reason that Hayate the Combat Butler works so well and has lasted as long as it has and it proves it throughout this first season. By providing just enough plot and story development spread thin throughout the course of the series’ free-running comedic antics, you can keep viewers hooked for a very long time, especially if you manage to create an endearing and humorous cast of characters and Hayate the Combat Butler has those types of characters in spades. 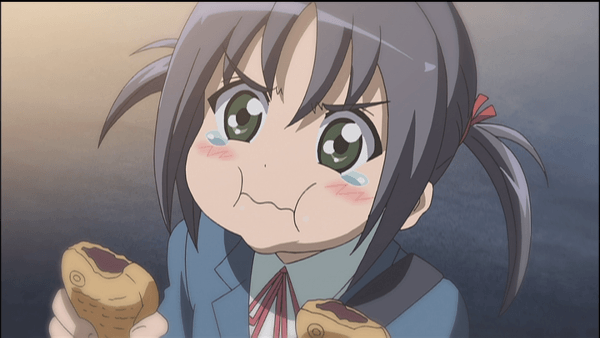 Hayate the Combat Butler Season 1 serves as the proper introduction to the series as it follows the manga as close as possible compared to later anime adaptations that unfortunately started to put their own twist on the story and because of this viewers are fully introduced to the many characters that appear throughout the series and what they add to an episode when it happens to be one that they are included in. This also helps viewers connect a bit better with certain main characters and recognize the many misunderstandings that take place as the girls around Hayate deny any possible feelings or simply clash with one another while Hayate remains oblivious.

There are of course plenty of one-off characters and many of the episodes here are episodic in nature, there are also small story tangents that take place here and there which fit the structure of this series well. Those looking for some great comedy will find that nearly every episode is funny in its own way since most of the humor comes from the characters as well as plenty of jokes that reference other series and there are even episodes that end up being devoted to long-running gags. 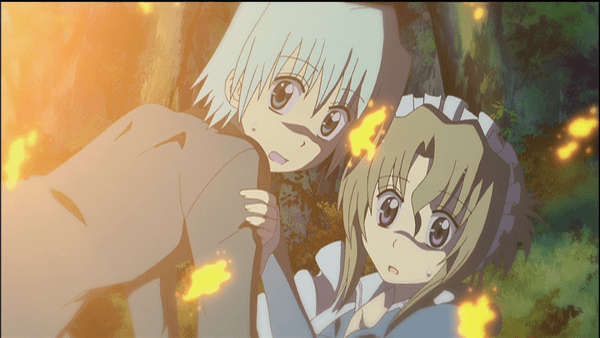 This means that while there may be certain elements of Hayate the Combat Butler’s first season that might not fit every viewer’s taste, there is something for everyone here as this fifty-two episode season explores practically every type of joke possible. By combining this free style of humor, an amazing cast of characters to hold everything together, and a core storyline that is touched upon just enough to remain relevant while mini-stories and episodic comedic stories make up the base of the series shows just how strong of a start Hayate the Combat Butler had and why it is still running today.

Visuals
Now it is worth noting that although Hayate the Combat Butler Season 1 has been released on Blu-ray, that you really shouldn’t be expecting a significant upgrade here. There are a number of scenes that do look cleaner than before and the colors are a bit more vibrant than they originally appeared but it is worth noting that the first season was created nearly ten years ago at this point. As such there are plenty of moments that scenes can appear a bit fuzzy and the overall improvements this time around are unfortunately rather minimal. 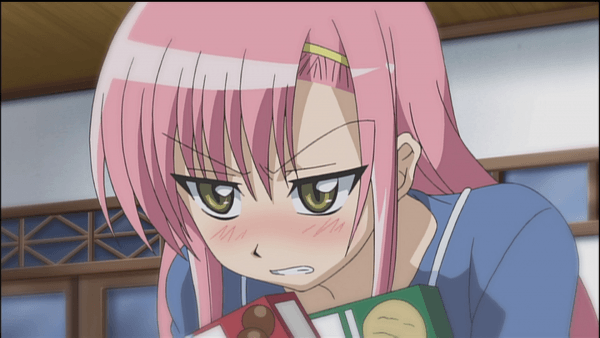 That being said, although the Blu-ray upgrade may not add much to the title the art style used by SynergySP works very well for a comedy series such as this one. The character designs are reflected well in the anime and are memorable enough on their own but are helped by there being plenty of costume changes and different locales helping keep the series feeling fresh throughout the long season.

Audio
With the release of Hayate the Combat Butler Season 1 Sentai Filmworks opted to only include the original Japanese voice work for the series. This may be a disappointment to some but considering the amount of humor that is based around the language and certain Japanese themed products this is likely for the best. This is especially true considering many of the voice actors and actresses, especially Nagi being voiced by Rie Kugimiya, are handled incredibly well by their original voice actors. 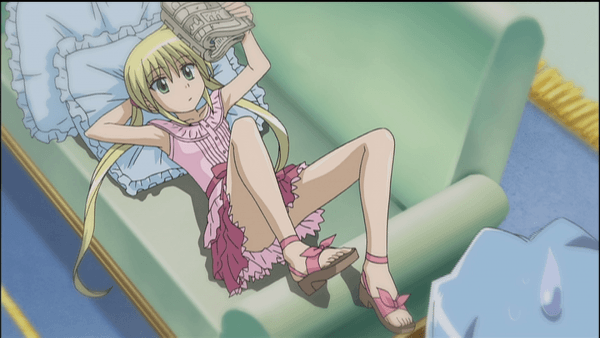 The background music found throughout this first season is varied well enough with plenty of different tracks used for comedic scenes but there is a heavy reliance on simple relaxing themes. Since there are fifty two episodes this time around viewers can expect a total of two different openings as well as four different closing themes, with many of the tracks being quite memorable.

Extras
The bonus features for this release are rather slim as the company has only included a clean version of the opening and ending themes as well as trailers for other Sentai Filmworks releases.

Overall
Hayate the Combat Butler Season 1 may show its age visually but the wild style of comedy that helped establish the series still remains as solid as ever nine years later. Those looking for a classic comedy series with at least some form of a storyline mixed in will find that, thanks to the many well-handled and established characters, fits the bill perfectly. Although it may be something of a large investment, those looking to dive into the series will find that this first season is easily the best way to start.
Capsule Computers review guidelines can be found here.