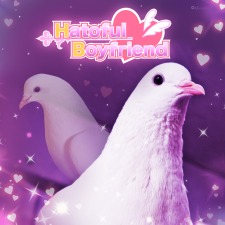 Visual novels are an interesting creature aren’t they? More book than video game, these Japanese created choose-your-own adventure games (which usually focus on forming relationships and going on dates) have never really appealed to me. So when a copy of Hatoful Boyfriend for the PSVita happened across my desk, I was skeptical; I knew that the game was basically a dating sim but in lieu of human companions, you were partnered up with a series of birds but beyond that I didn’t have any idea what to expect, and now after playing through the campaign a few times… I still don’t.

At the begining of Hatoful Boyfriend, you are the only human girl in a school for intelligent, sentient pigeons. I know what you’re probably thinking “no, you’ve gotta be making that up!” ’cause frankly that’s exactly what I thought when I heard about it, but I kid you not that is the plot. The most interesting part about being the only human in a school for birds is that you face nearly no bigotry at all. People acknowledge that you’re a human but nobody seems to care. Maybe we all have a lesson or two to learn from this game already?

At its core, Hatoful Boyfriend is a dating simulator with a side-order of suspense thriller. As a sophmore at the prestigious St. PigeoNation Institute, you will take the protagonist on a journey through the school year and along the way meet a cast of characters that you will have the option of romancing. If this sounds weird then that is because it definitely is. Oh also, there are conspiracies and world ending apocalypses to contend with on the way to finding true romantic bird love.

Having never really experienced a Visual Novel before, I did some research after finishing Hatoful Boyfriend to see how it different it was from other games in the genre (aside from the obvious winged cast). Sadly, I found that many of the characters were stock-standard archetypes of the genre; the sickly childhood friend, the egotistical aristocrat etc, making the game feel a lot more generic than I first thought it would be. I would have loved to see the characters exhibit some birdlike characteristics, but aside from a few bird related puns, there was none of the sort to be found. 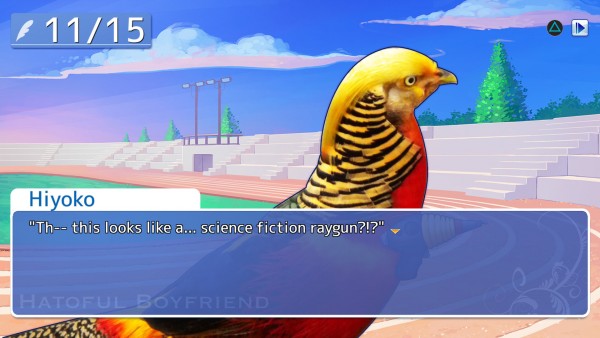 In terms of gameplay, there isn’t much here. This is a game that is focused almost entirely on its story (which is to be expected, considering the genre) and as such there are little to any gameplay elements involved. You press a button to move to the ne

There are two main types of branching options that I noticed during my play through: Ones that change the story and ones that level up your character. While there are plenty of the former, each offering you a different take on the story and different romance options, I found almost no use for the latter. Maybe I am not able to look closely enough at the mechanics of the game, or maybe the changes of earning a few extra vitality points are so subtle that I just didn’t notice them, but really I felt like nothing in particular was changing aside from a few numbers on the screen. 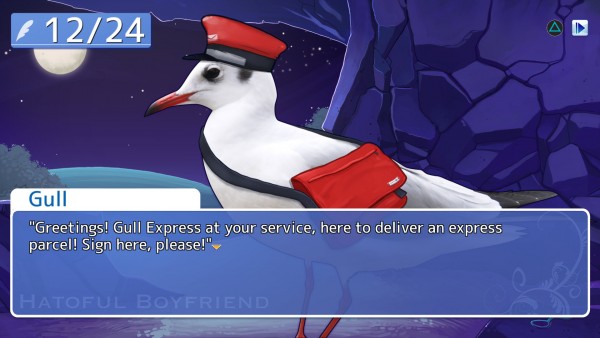 Since this is a kind of choose-your own adventure story, the replay (or should I say reread) ability is definitely present. With I believe it is eight different romance options, there are at LEAST eight different ways that the story can go. Not to mention the fact that once you have beaten the game more than once, more storyline choices open up in subsequent playthroughs and completely new storylines become available to you.

Making the replayability even more impressive is the fact that at the press of a button you can effecticely skip over all of the dialogue until either you choose to stop and start reading again, or you reach a decision. Being able to skip over the first 10 or so minutes of the game really made me more entusiastic to play through the story again than I would normally be. 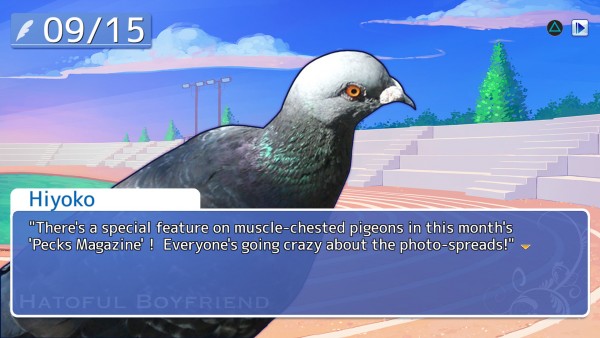 Like most Visual Novels, Hatoful Boyfriend has a very simplistic and motionless animation style for the game, leaving it feeling like you are holding a small manga or comic book in your hands. Backgrounds are reused time and time again and are colourful yet simplistic drawings of hallways, classrooms of playgrounds in order to convey where the particular chapter of the story is taking place, but there is really nothing exciting or energetic about them.

What does really stand out is the way that characters are portrayed on-screen. Instead of the traditional anime styled drawings that one might expect from a Visual Novel, Hatoful uses high definition photos of birds to represent each character. It is a really bizarre contrast between the highly colourful backdrops and the 1080p bird photos in the foreground, but surprisingly it works really well. I’m not the biggest bird-watcher out there (and I’m sure I’m not the only one) so it took me some time to recognise the differences between some of the characters. I didn’t really see the immediate differences between some characters which made some dialogue a little clumsy for me.

As for sound, the game is incredibly minimalist. While there is a full voice cast credited, nobody actually speaks. ( I believe the cast is credited to keep it in line with all the other Hatoful Boyfriend installments across various mediums). The music is soft and quiet so as to create almost an ambient white-noise while you’re playing, but that’s about all there is to listen to. I am to understand that the simple style of animation and music is pretty common in the genre so I can’t be too harsh on it, but I personally was hoping for something a little more interesting. 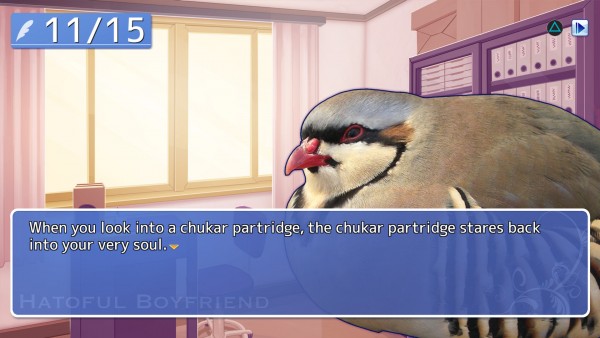 I just… I’m not sure what to think about Hatoful Boyfriend. Honestly, I am not the target for this type of game and that makes it really hard to judge objectively. The story itself seems pretty solid, if not derivative of other games in the genre and once you move past the zaniness factor of all the other characters being birds, there seems to be nothing overly unique about the experience at all. All that being said however, the novel’s short nature and branching paths make for some real replay value as you explore what might have been. In the end however, I left Hatoful Boyfriend without any strong feelings one way or the other. If you are looking for a new visual novel to occupy your time or are an avid fan of pigeons then definitely pick it up, otherwise it isn’t a game that you need to play.