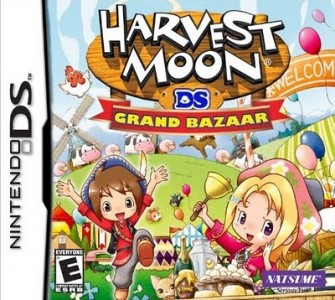 The bazaar was once the pride of Zephyr Town, drawing in huge crowds as the best market in the region, but has fallen into disarray following dwindling customer numbers. Now you, the new kid on the block, have been assigned to the town’s farm by the Mayor himself in the hope of restoring the bazaar to its former glory by selling your amazing produce, bringing prosperity to the town once more. 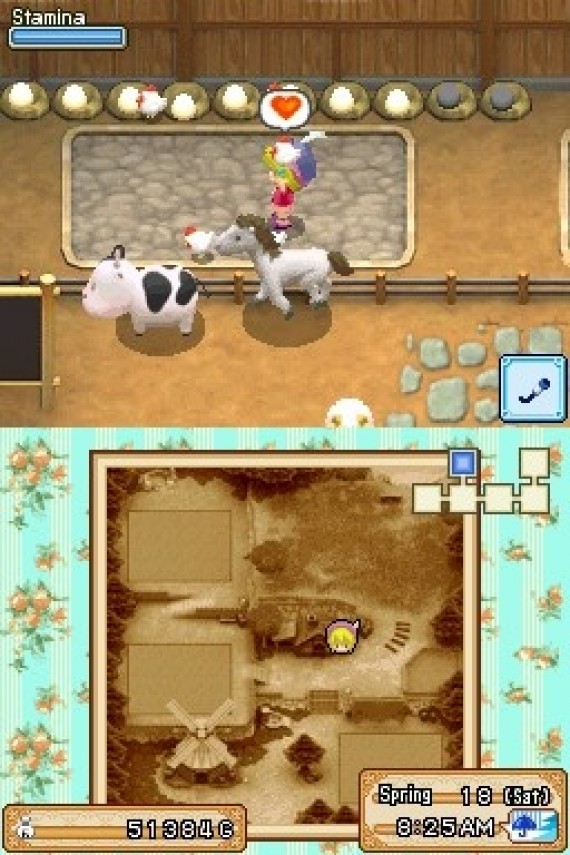 It’s one of the better handheld Harvest Moons thanks to some differences, particularly the grand bazaar at the end of every week, although it seems to offer a slightly slower, more relaxing pace of play than previous Harvest Moon games which had you rushing around in order to squeeze everything you needed to do into one day and dealt out punishment with a heavy hand when you did anything wrong. You still have to water your plants otherwise they shrivel up and die (likewise with your livestock, minus the shrivelling), but Harvest Moon: Grand Bazaar seems to be more forgiving in this respect, a subtly done and welcome change.

However, this more sedate pace of play could easily be perceived as dullness. There’s no denying that the town you find yourself living in doesn’t have a whole lot going on most of the time, with conversations with the various residents being little beyond a greeting out of courtesy, and deep discussions hindered by limited set phrases from others and a lack of many two-way conversations. To liven things up a bit there are festivals dotted through the calendar, but just hope they don’t clash with your birthday, as this way everyone will be too absorbed in the festival to care, mark or even mention the occasion at all. The first week is so uneventful you will even find yourself heading to bed early to pass the time in your boring schedule, waking up the next day at 6am only to have exhausted everything possible to do by noon, using just a fraction of your stamina bar (which depletes based on the level activity you have been undertaking) in the process. When it really looks up though, is once you are talked through and introduced to the first bazaar. 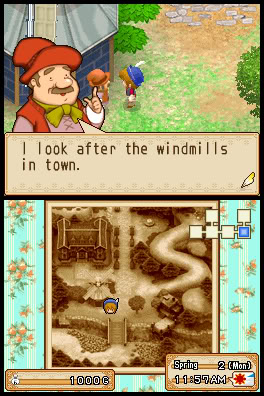 As well as selling your wares, the selection of market stalls provides a place to spend your earnings, with animals, special tools, things that are crucial to your progress as a farmer, all accessible from the bazaar alone. A satisfying selling system is in place where you have to ring a bell to attract attention to your stall and the goods you’ve got lined up, and if they’re interested the punters will display a number above their heads. This number represents the amount of their chosen item they would like to buy, and subsequently the amount of times you need to press A.

The Mayor gives you a target turnover for the market, giving large goals to ensure the market can grow and prosper. Although there is a normal shop to sell things to during the week, you soon learn to hold onto your items for selling until the bazaar, as things fetch a higher price among the public and every penny is needed to reach the Mayor’s ambitious goals. It provides a much more engaging way of selling than packing your goods into a basket to earn a living, even though the basket does play its part still and now acts as storage, something you learn to make use of for perishables if you want them to last until the sale date. As the in-game weeks go by, you realise the quality of your products increasing, with more advanced recipes having been learnt or a better standard haul of vegetables/animal produce, and the cycle adds a sense of structure in a departure from the usual dragging-on-without-any-significant-feeling-of-progress of its predecessors.

The graphics are a totally safe effort, but in lacking ambition use the system really well; characters have basic animation, but the whole in-game world is cute, clear and colourful, plus visual touches like smoke puffing out of chimneys and insects (which you can also catch) roaming free add an element of life to the otherwise fairly static scenes. Despite the lot of them being a boring bunch, getting to know the locals features much like in other games too, with you eventually wooing one of the town’s women into slotting into the farmer’s wife role, or the opposite if you picked the female character at the start of the game. Convincing a member of the opposite sex to be your spouse consists of barely more than throwing flowers and gifts at them daily until they give in, though given their uninteresting personalities, some may even prefer a solitary existence. 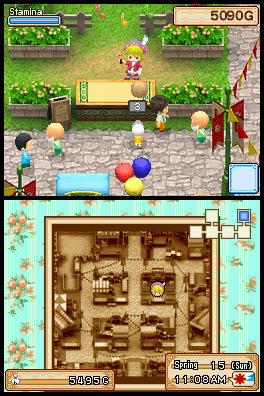 Overall, Harvest Moon: Grand Bazaar is a bit of a slow-burner in that it gets off to a slow start initially, and from there the majority of gameplay hinges on the weekly bazaar which acts as your primary source of cash and equipment. Interacting with the other residents isn’t advised for fear of falling asleep, slumping over and accidentally lodging a stylus up your nose, but your otherwise peaceful existence makes it a relaxing game to play, and by having your calendar in-game, rather than based on real-life (a la Animal Crossing), means there’s no pressure to tend to your farm every day, leaving you free to progress through the game casually at your own pace.