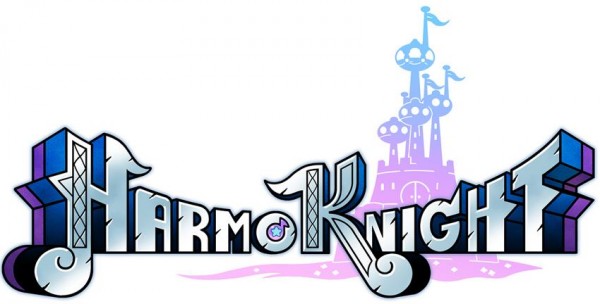 Overview
The 3DS eShop has brought us some little gems in an overlooked space during the past two years, with smaller developers such as Renegade Kid making a name for themselves with titles full of heart. The almighty Pokemon developer Game Freak have now dropped HarmoKnight on the service, which is a rhythm-based platformer. Sure, the genre is a bit odd coming from the source, but if you have played Drill Dozer, you should know that Game Freak know how to create something other than Pokemon in their spare time. Does HarmoKnight hit the right tunes, or does this little adventure prove to be off key? Let’s find out.

Story
Much like a good portion of 2D platformers on the market, HarmoKnight features a lovable little hero by the name of Tempo, who has been tasked in saving the land of Melodia and the Princess from an evil band of foes with his rabbit sidekick known as Tappy. This world is bright and full of color, and the charm is turned up so high that some may cringe at all of the cute. Now, that might normally detour a good number of older players, but HarmoKnight manages to strike a balance with its lovable cast of characters and general offbeat, quirky design. Is it for everyone? Not really. Those who enjoy their Pokemon and want a title that is light on narrative but full of heart however will probably find what they are looking for here. 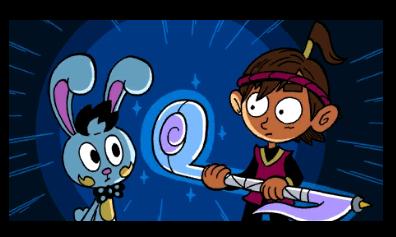 Gameplay
If you see some screenshots and go into HarmoKnight thinking this is your run-of-the-mill platformer, you will be in for a rude awakening. Each stage is laid out like a platformer, but Tempo is constantly moving on the side-scrolling plain, so the player does little to control his general movements. Instead, it’s your actions that matter, as before platforming even comes into the equation, HarmoKnight is all about the rhythm-action aspect. 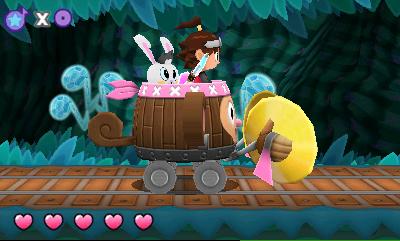 The controls are rather simple in HarmoKnight. For the most part, players will be utilzing the A and B buttons to tap to the beat, which in turn allows our hero to jump over obstacles and smack enemies with his trusty staff. As the game progresses, other playable allies join up with Tempo, giving the game a nice change of pace from the norm with these new protagonists that shoot arrows and have their animal sidekicks do the dirty work. If I could best describe the mechanics within HarmoKnight, I would have to compare them to Space Channel 5. As the track plays and the levels scroll onward, enemies start to appear. Once an enemy is near, you must either smack it or jump over it, which rewards the player with a note. Fail to hit the foe on time and Tempo loses a heart. Luckily, these tunes are all made to get inside your brain, so knowing when to hit the next enemy could be done blindfolded with the right amount of practice. 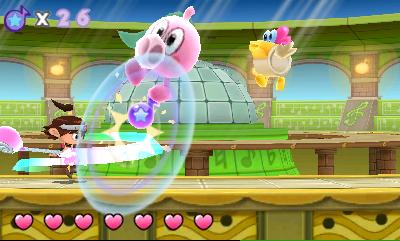 As far as an objective goes, there really isn’t one aside from collecting as many notes as possible through the means of standard pick-ups and defeating enemies. As each stage is beaten, players are rewarded a rating with their performance – with “Good” or better awarding you with a coveted “Royal Note”. These notes can be considered keys of sorts, as they open up the world to new levels. It’s rather easy to get the hang of the game pretty quick and there are tutorials, but those who cannot pass a stage with enough notes in tow must keep attempting in order to progress onward. At the end of each world, a boss awaits that delivers a more streamlined challenge. Sure, its all about moving to the beat, but Tempo must deliver blows in succession and keep all of his health in one semi-lengthy battle in order to move on. The gameplay doesn’t necessarily change for these portions, but out of all the levels in the game, these battles will keep you on your toes until that last hit is applied. 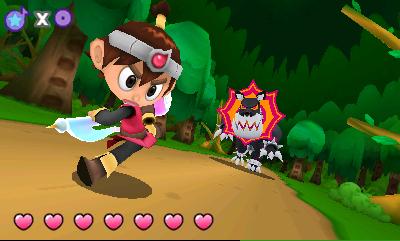 It all sounds lovely, and trust me – HarmoKnight is a fun game, but there is one flaw that holds this musical adventure back from reaching its full potential. No matter what stage you are on, the gameplay never really changes. Sure, the controls are solid and the music intertwines perfectly with the experience, but the gameplay itself never evolves enough to give the player a true feeling of progression. Enemies change from time to time – as does the setting, but with only a sparse amount of power-ups and new mechanics added, each level feels much like the one before it due to the lack of features added in. Now, this isn’t a deal breaker in the slightest, but it’s a shame to see the 3DS’ loaded repertoire wasn’t utilized more to make this already great romp even more magical.

Visuals and Audio
Earlier, I mentioned about how bright and colorful HarmoKnight is for a reason. Every level appears as digital eye candy, with chipper animations, charming models, and cutscenes that attempt to use the 3D for some eye-popping moments of excitement. It’s almost as if you are playing a Kirby title in many ways, as the world is just as welcoming, and the little mascot Tempo is just thrilled for you to come along with him on his little quest. Animations are a large part of what makes up the gameplay within HarmoKnight as well, as one missed jump can meet the end of our hero in a heartbeat. Thankfully, if you die, it is indeed at your own fault – as I experienced no dips in framerate or chugging throughout the entire game. 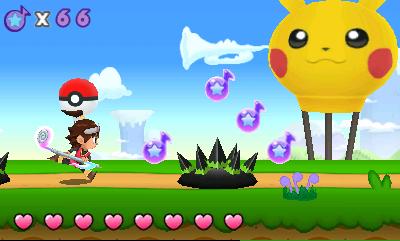 Yeah, the visuals are a big deal, but the music and lively soundtrack is where the core of HarmoKnight’s charms can be found. Each and every stage is pumped full of a unique, poppy tune that will carry you to the finish and perfectly in sync with the actions your character performs. As a bonus, and this is a big one here – Game Freak have also included a decent number of bonus stages that feature some of the most loved tunes from the Pokemon universe. Sure, the sweet and melodic tracks do fine on their own, but I felt like the addition of the familiar songs gave myself an even greater appreciation for the main adventure’s mechanics as a whole.

Overall
If HarmoKnight would have been a fully priced retail value, I can easily say that it might have not lived up to it’s price-tag as there isn’t a lot of growth throughout the game. As you know however, this title is made for the eShop and is only priced at fifteen bucks, making it a snazzy addition to the growing library and proving that the service isn’t just for smaller names to produce on. Games like HarmoKnight are what the eShop is all about – quick and light bursts of fun, and on that note, anyone wanting to add a true delight to their digital collection should grab the latest from Game Freak, as this musical romp is sure to impress anyone who are looking for some guaranteed quality with a good beat.