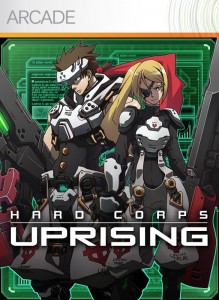 Overview:
Contra is a series that has been well known for its brutally challenging difficulty and trademark style of gameplay of being a run and gun shooter. Now Konami has decided to have Arc System Works take a shot at making a Contra styled game themselves. Well known for their work on the Guilty Gear franchise and BlazBlue fighting games, does Hard Corps: Uprising make a nice addition to the franchise with Arc System Works’ anime styled touch to it?

Story:
Now do not let the name fool you. Hard Corps: Uprising is indeed a part of the Contra storyline and takes place before Contra: Hard Corps, making it a prequel to that story. The year is 2613 and the Commonwealth Empire has begun to take power across the world under the leadership of Tiberius. The neighboring countries have done what they can to avoid direct confrontation with the Commonwealth but are suffering greatly at their hands.

Entire the Resistance Forces. These fighters have struggled against the superior military might that the Commonwealth can call upon, but not anymore. Two elite soldiers are entering the battlefield, Bahamut and Krystal. These two soldiers are able to take the fight to the Commonwealth, all the while getting their story told through text descriptions in between stages. 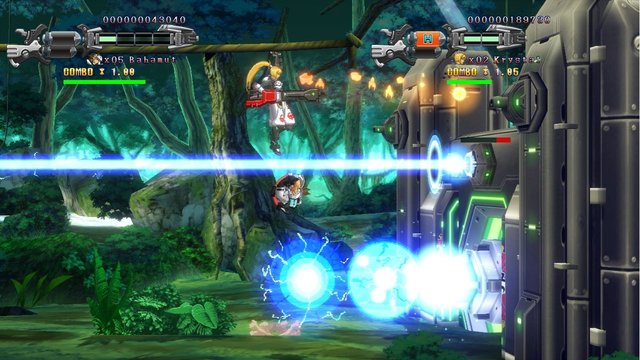 These descriptions are unfortunately not the most exciting bit of storytelling considering that it is the only place that story is really being told short of the beautiful opening cutscene. The story text differs depending whether you are playing Bahamut and Krystal, and looks into what they are thinking about each other as Krystal struggles to trust Bahamut who is an Ex-Commonwealth soldier. The story is unfortunately pretty loose as far as development goes, but it does supply at least enough to explain what you are fighting for.

Graphics:
Those who have played any games created by Arc System Works know that they usually use hand-drawn characters in their games and are often anime-styled with their coloration and design. This has been true for BlazBlue and Guilty Gear, and is just as true for Hard Corps: Uprising. This isn’t to the games’ detriment however because the refreshing art style works very well with the variety of levels that are in the game, as well as giving players a variety of different enemies to face off against. Plus when you choose your character you have the option of changing their color palette, which can create some remarkable lookalikes that may be unintentional, or a nice reference that you can find out for yourself.

Gameplay:
There are two modes of gameplay that can be selected immediately when you load Hard Corps: Uprising up for the first time, the Arcade Mode and the Rising Mode. Arcade Mode is exactly what it sounds like, a straight run through of the game with your standard amount of health and lives to make it through the levels. While Rising Mode provides an experience similar to an RPG where players can upgrade their character’s abilities such as health amount, credit amount, weapons and more. 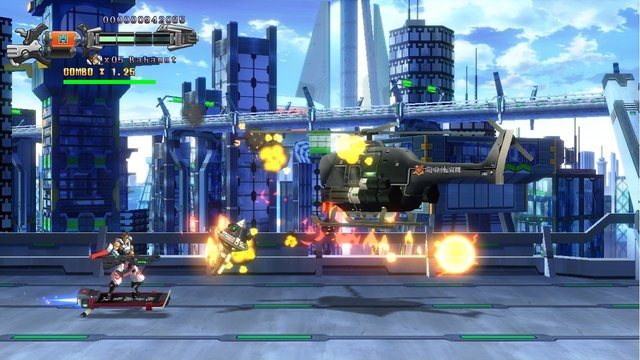 Now, right out of the gates there is a pretty big part of the game that you should know. It is quite difficult and there is no option for changing your game difficulty. Now while this may be offputting to some, Contra fans will know that this is exactly what the game is known for. Arcade mode is very difficult and will only allow players to be hit a maximum of two times before losing a life, and then only having two lives each time.

Now rather than having a difficulty option, there is the Rising Mode instead. Rising Mode plays similar to Arcade Mode except that you have the ability to choose your starting stage (only as far as you’ve made it so far), and allowing your player to be upgraded significantly. There are a few times that you may struggle simply to get past the first level, but all of those kills that you are acquiring add up to more upgrades, which makes it an easier time for yourself and make the game accessible to those who are looking for an action packed and fast paced shooter, but not quite capable of answering the difficult level that it requires.

As you enter a level you will immediately notice that you’re in a fight for your life as your enemies are numerous and their bullets and bodies are coming right at you. You take direct damage when an enemy touches you, as well as shoots you of course, but there is no melee button and your character does not automatically hit close enemies which I found to be a small disappointment. Rather you will run through each level shooting through a large amount of enemies and acquiring in-stage power ups that will help you along. 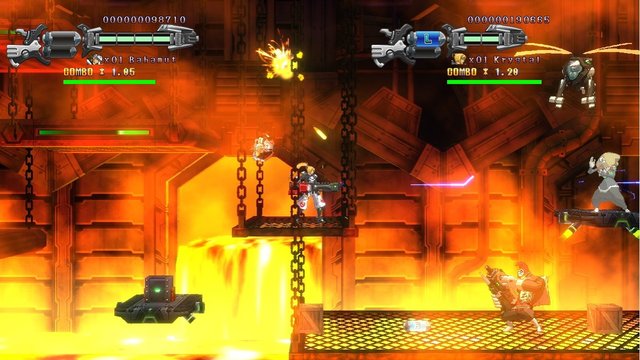 These in-game power ups provide immediate weapon upgrades depending on the ones that you pick up. They include a rapid fire machine gun, a scattergun (shotgun), a flame throwing plasma gun, homing laser shooter, grenade launcher, and a reflecting beam. You will be able to switch which weapon you use by pressing Y, though you can only carry two at a time, meaning if you pick up a new weapon with one already equipped it will replace it. Weapons are dropped at the slightest hit however, so that means that you will need to pick when and where to use your weapon because they can make a pivotal turning point in boss fights. The most efficient weapon is probably the homing laser as you can easily dash through an area shooting it and most likely make it through unscathed, though I found myself favoring the scattergun usually.

Now I’ve mentioned before that the game is hard, and that cannot be understated. Sure there may not be as many enemies as hardcore Contra fans would be used to, but there are a number of cheap deaths that can occur which can easily remove a life from your precious counter. These include the relatively badly designed wall climbing sequences which not only break up the action, but involve areas that one touch can cause you to fall to your death. Also there are a number of levels which take place on or near water, and a careless respawn system can often cause your character to fall into the water and remove yet another life, which can cause a quick end to your Arcade play through.

Overall:
Hard Corps: Uprising stays true to the Contra formula while also making it accessible to newcomers that are looking for a fun time. There is plenty of fun to be had, especially after defeating the first stage after losing so many times before. With the inclusion of Rising Mode it extends the replayability of the game significantly and allows players to enjoy the game thoroughly. So there is something for everyone in Hard Corps: Uprising. If you are a Contra fan who likes a challenge, tackle Arcade mode, anyone else would be best suited to trying Rising Mode, and despite a few cheap deaths and badly designed wall climbing sequences, enjoy a great run and gun shooter.

I give Hard Corps: Uprising