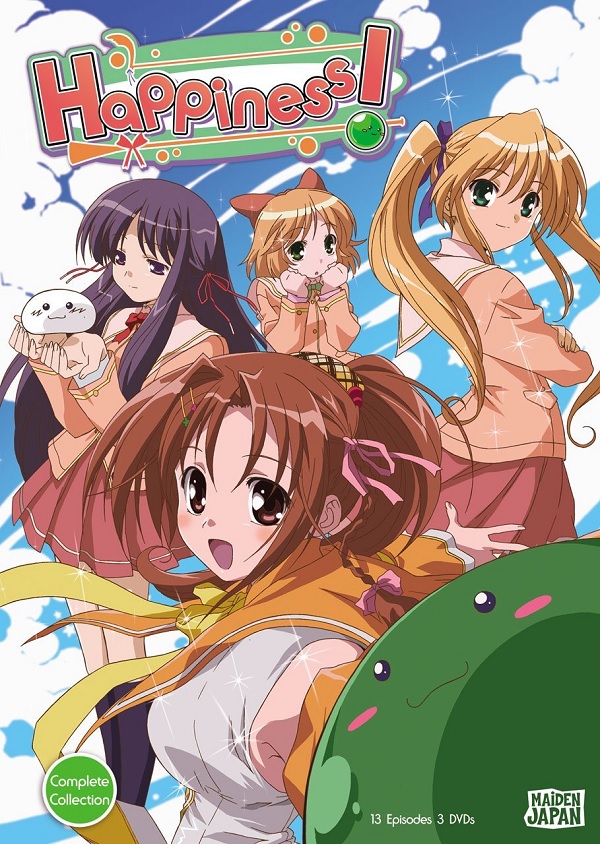 Overview
Anime adaptations of light novels are the popular thing nowadays but less than ten years ago the same could be said for visual novels. During this time frame numerous harem style romantic comedies were produced from that pool of source material and while a few of them can be fondly remembered, a large number of them have been forgotten.  One such series which many have probably forgotten is Happiness! which has recently been given a subtitle only release by Maiden Japan. The question is, is Happiness! an anime that was better left forgotten?

Story
In the world of Happiness! there are a select few people who are gifted with magic while the majority of the population have no magical powers. At Mizuhosaka Academy there is a magic section where magically talented students train to become mages and a normal school where everyday teenagers attend class. Because of this division, the two groups rarely interact with one another during school. 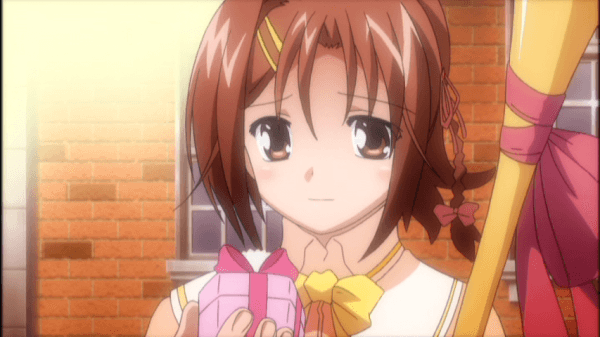 However one Valentine’s Day, the magical branch of the school is partially destroyed due to a gas explosion and as such, the mages will have to attend school with the students in the normal section of the school. This is great news for a girl named Haruhi Kamisaka, the most talented mage in her class, as she had just met a normal boy named Yuma earlier in the day and given him some chocolates as a friendly gesture.

You see, when Haruhi was a child she was saved by a young boy who used magic to stop bullies from pestering her and ever since that day she has trained to become a mage and, thanks to a fortune telling, has looked for the boy every Valentine’s Day and Yuma bears a striking resemblance to the boy despite his dislike of magic that is used frivolously. 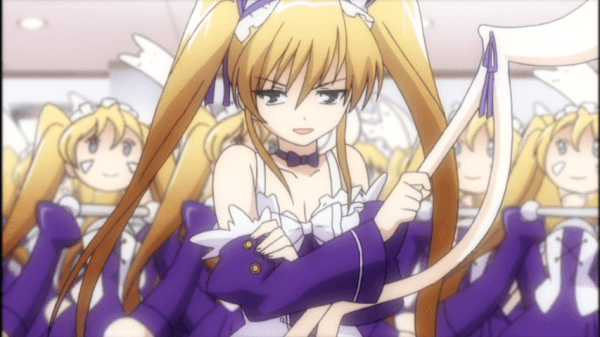 Anyways, with Haruhi and her rival/close friend Anri transferring into their class, Yuma and his two childhood friends Hachi and Jun become fast friends with one another and begin to deal with more magical things happening in their lives. While this is happening however, a mysterious girl has begun appearing around the school as if searching for something that will lead to a major revelation. With everything going on could romance be in the air?

Now one would think that throwing together a bunch of mages and a bunch of normal students that previously did not interact with one another would create some unusual hijinks and some interesting developments along the way. Unfortunately that is not the case in Happiness! as the whole magic aspect is usually rarely touched upon or briefly used in each episode. This then is either followed up by Yuma making a one off comment about how bad magic is or not saying anything at all and participating with everyone else. Or it doesn’t have any influence whatsoever and then it falls back on the characters to make this series worthwhile. 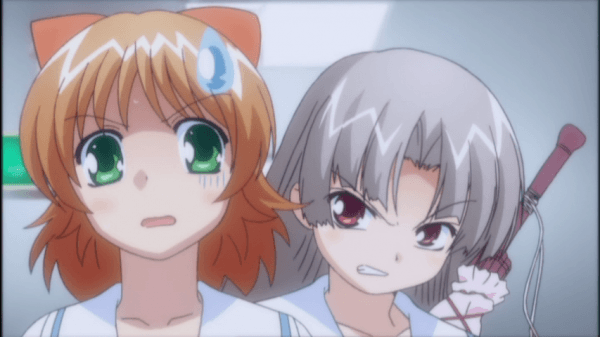 Most of the magical mistakes occur from Anri who is talented but tends to overstep her capabilities which results in her magic running wild. She plays the klutz of the role, while there is the devoted little sister with “family circumstances,” a perverted male best friend, a wise older-sister type mage, a few characters that come in later on, and the trap. Ironically, the trap is probably the most memorable character of the bunch since almost every character in this release is as cookie cutter as they come.

Jun, the aforementioned trap, is the source of a lot of the humor in Happiness! since he doesn’t care whatsoever about how he acts as he believes that girls clothing suits him better and often makes Hachi uncomfortable or uses his looks for an advantage. As for the main couple, despite being based off of an eroge that has multiple paths, there is never a doubt that Haruhi is the main lead throughout the series and her developments with Yuma, and Yuma’s the general lack of close interaction with any other female character helps drive this home early. 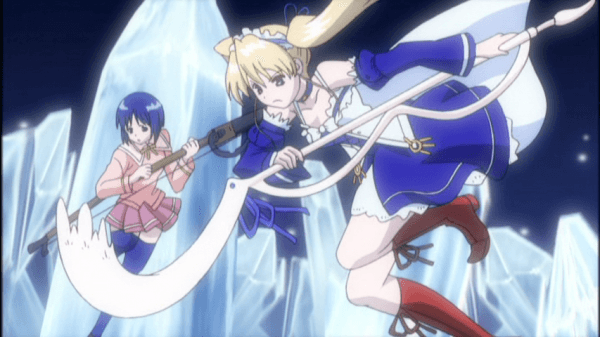 If you can’t tell already, almost everything in Happiness! is boring to watch and predictable to boot. With only one memorable character and basic humor that will rarely draw laughs out of the viewer a lot of the standard rom-com events feel like a chore. Even then when the story finally kicks into gear for the last few episodes of the release, viewers will be wondering why they couldn’t have developed this story a bit over the course of the series instead of just dumping a lot of information in the second to last episode.

Visuals
Coming into this series it is worth noting that this anime was first made back in 2006 by Artland so viewers should be prepared for a somewhat dated experience. Unfortunately it can be said that even compared to other anime at the time, Happiness! is not a good looking series in almost any category, especially when it comes to actual animation and character detail. One would think that the use of magic would be the highlight of the series but unfortunately, outside of the repeated scenes for when the girls chant the magic words which actually are nice looking, most of the magic effects are basic. 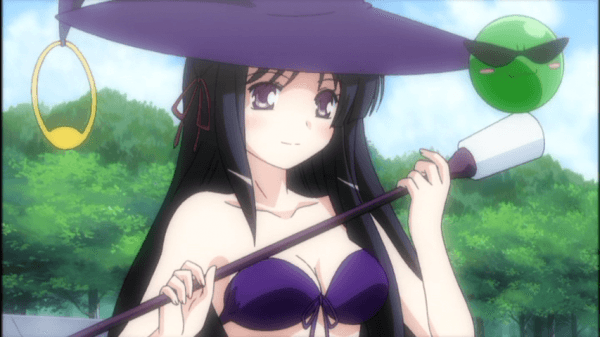 The same can be said for the designs of the characters and their outfits. The characters are not memorable looking in the least, again Jun is the only character to actually stand out and that is probably due to his light-purple hair, as they fit the standard look for the series, though a character introduced later into the series, Ibuki, is decently designed as well. As far as the fan service in this series is concerned, it is minimalistic with only a few panty shots here and there and your standard beach episode.

Audio
As mentioned at the beginning of this review, Happiness! is English sub only release, which means that the Japanese voice track is all that is included in the release. This is fine for the most part as almost all of the characters fit their roles well, though Ibuki’s voice actress might catch a few people off guard since she actually sounds different than how many people would expect given her design. 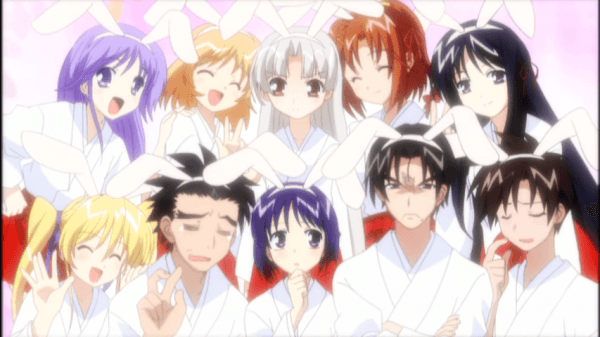 The background music throughout Happiness! is your very forgettable which is a shame, since the opening theme “Happiness!” by Murata is a rather enjoyable opening theme set to some halfway decent animation, though the same cannot be said about the ending theme “Magical Generation” by Yui Sakakibara, the voice actress for Haruhi, as it is way too basic and the only time it feels like it has any impact is in the final episode as it plays over the conclusion. 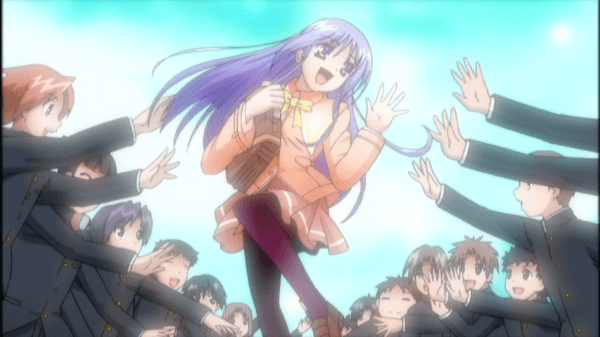 This OVA is a full episode titled “Jun Watarase’s Magnificent Day” and again considering the fact that Jun is the only likable and memorable character of the bunch, it is great that this episode actually decided to focus entirely on the character. It is worth noting that this happens somewhere in the middle of the series and not after episode twelve but it focuses on what happens to Jun after a bunch of magic ends up making this trap a real girl in what is the funniest episode on the release.

Overall
It pains me to say that Happiness! is a boring show, because at least on paper it sounds like it has a lot going for it. However very little is done with the premise and when you factor in the poor artwork and general lack of comedy throughout the release Happiness! feels generic in every regard. The only saving grace for this release is Jun’s cross-dressing antics and how the story decides to pick up at the end, but by then it is far too late to save Happiness! from being a dud.